Getting Up to Snuff on the the House

We dabbled and piddled around the house this weekend, and we got a lot done before we knew it!

The biggest task was to go over to the warehouse and get the motorhome.  We wanted it parked here in the yard before any of the freezing rain/sleet/snow that was forecast would hit Saturday night.  (it never did)   Saturday night was the Packer Game, so we had to get it over here before the game started, of course.

We had originally rented the heated warehouse for the entire winter, up to April 1, 2013.  It was a great place to keep the rig without winterizing it, and also refinish the cabinets and furniture and load up with purchases while we waited for the house closing.  But then, once we bought the house, we considered moving the motorhome to the yard, but we were still under a lease with the warehouse.  The landlord suddenly called one day and asked if he could meet me there to show the warehouse to a prospective renter who would like to rent it as soon as possible!  We could get out of our lease, and for both of us would be in a win-win situation.  (saved us about $1,600 and he got a guy signing a 2 year business lease)

He said that we had to only pay till Jan 15.  Next weekend is grandtot Chelsea's birthday party, that meant it would be a better this weekend to get the rig winterized and moved down here to Chilton.

We drove about 30 miles up there to the warehouse in Appleton.  I took care of the inside stuff to get the rig road worthy, and Steve finished up the winterizing and last minute sweeping and disposal of my staining cardboards and dropcloths from the cabinet and furniture work. Soon the rig was on the road and I was following behind in the car.  It was going HOME! 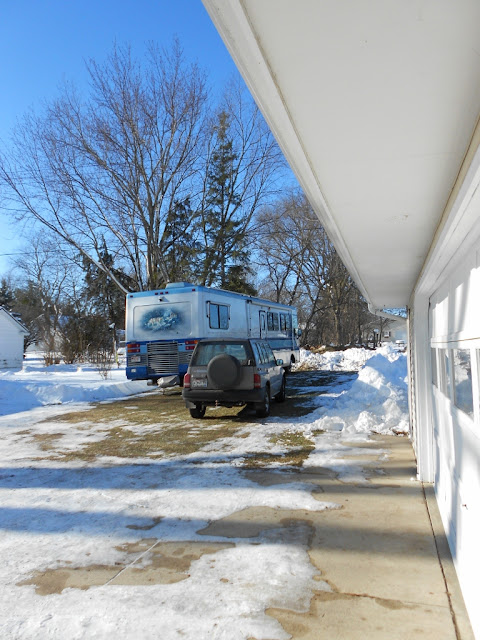 This is the plowed out area in the backyard where we wanted to park it. It's up on boards in case the ground gets "squishy" under it.  Next spring we will extend the driveway that far back.  The little Tracker vehicle normally goes in the garage, but right now we still have brotherinlaw Pete's utility trailer parked in there.  We used the trailer for moving the snowblower and lawnmower, and then 4 loads of tree branches to the city garage to dispose of them.

Sure felt good to have the motorhome parked back there where we can see it, and pop into it to get things we decide we need in the house.  I still have some weaving and yarn supplies in the lower compartments that need to come into the house, along with swapping over some of the kitchen utensil supplies with the house.  I like having it nearby, rather than stored somewhere.  We are planning a 5-6 week vacation to Texas yet this winter, so it's nearby to load up for that too. We have security motion lights out there, plus the crime rate is pretty low in this tiny town. Don't worry, our rigs always sat out in the snow and cold and ice for the last 15 years at the other house too.

Some of the other projects we did this weekend were moving my looms into the house!  I had two of them set up at the warehouse to go over to weave rugs on in my spare time. Last Monday, we only hauled them here with all of the other furniture and just stuffed them in the garage.   So on Saturday, Steve and I carried in the parts of the Newcomb loom which I assembled that one during the first part of the Packer Game.  (Packers WON!)   Then on Sunday we hauled in the Union loom fully assembled --- removing only one beam and horsing it through the doorways.  ACK!   We should have just disassembled it completely and hauled it in pieces too.  It was pretty heavy.  Again, those "Sliders" came in handy to slide it across the diningroom, around through the doorway into the Loom Room. 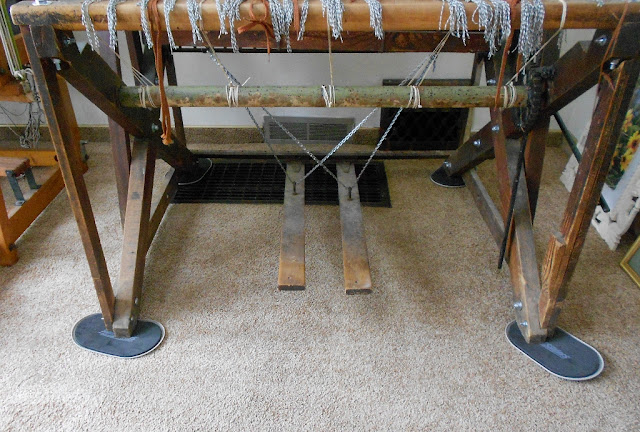 Once the loom was slid into place, we removed the Sliders to save them for the next project!
Now we only have to carry in the Tools of the Trade table loom from the motorhome. 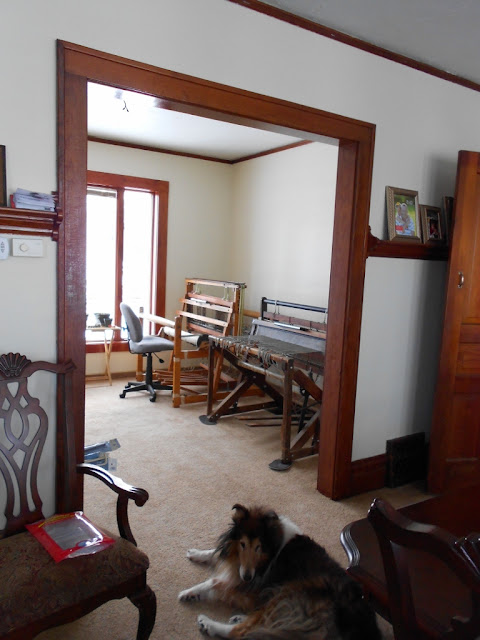 We have a set of french doors to install in this doorway to shut off the Loom Room from the diningroom, a future project to work on!

I never got any of the lace curtains up yet, because I need to get some other brackets to do it the way I want.  Then I will also hang up three of my overshot woven coverlets on rods on the wall in the Loom Room as decor.

Steve and I carried up 12 totes and 4 big garbage cans of weaving supplies upstairs to the little maids' room, which will now be my Fiber Storage Area.  Whew....

Steve also installed the remodeled ceiling fan into the Loom Room.  Originally, this fan was located in the dining room but we didn't need it there because of adding the chandelier (see 2 blogs back)  This fan was a very nice heavy and well-built fan, with a remote control, with three speeds, light dimmer and reverse all on the control unit.  But it was kinda dated looking in a brushed metal style and frosty swirly lamp shades on the light fixture portion. 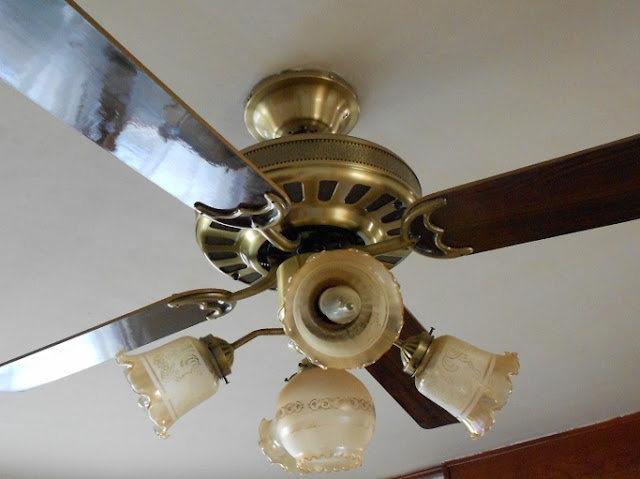 I took it down to the basement and sprayed it from all angles with some Rustoleum Hammered Metal paint in brown. It sure looked great!   Then I did some polystain (colored polyurethane) on the blades too.  I broke one of the shades, but that was okay, because I am going to replace them all with something else after I get to Menards this week.    They have a great assortment of replacement shades and I will see what I like on my next visit. 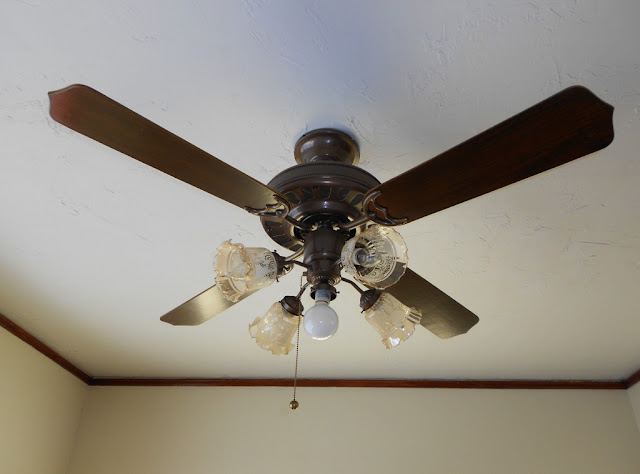 I think it sure turned out nice.  Compared to spending over $100 for a new one in the stores, this was a great refurbish and saved us money.  I had also done the one up in the bedroom too with the same hammered brown paint.  Looks like new!  Next I might repaint the one for the front porch from glossy brass to a white color.

Speaking of the front porch, here it is now with the wicker furniture and my fake palm plant that Erin keeps teasing me about.    The porch faces east so the sunshine comes directly in across all of the front windows during the morning hours, then about noon it comes from the side, and by afternoon it's all shaded.  Should be very pleasant this summer to sit out there.  Even on this sunny winter day it was comfortable, although the outside temps were in the 20's.  Solar Heat, baby, yah! 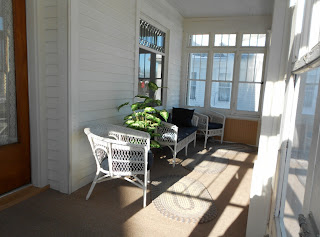 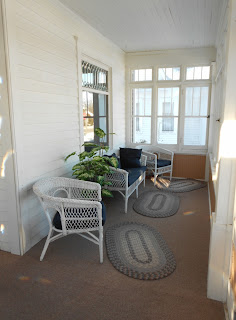 The front porch will need a fresh coat of white paint this spring on the inside.  Also I will paint the terracotta colored panels of wainscoting into perhaps a navy blue to go with the cushions on our wicker furniture.  I will weave up some new rugs too....   I am looking forward to sipping coffee out on the porch in the mornings with Steve.

Oh, Santa brought Steveio a new jig saw... so he had to try it out and cut a slit in our front porch door for our new mail slot! 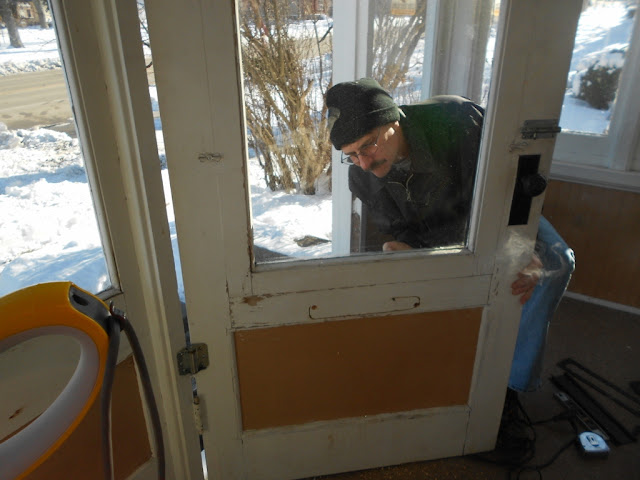 Previously, the mail carriers just brought the mail into the porch for the old couple who lived here.  They would set it on a seat of a chair just inside the front porch door.  We told them we can put up a mail slot if they would like.  Sure!  Just said to make sure it's big enough to fit mail through, and any packages they can open the door and put them inside the porch.  How nice is that? 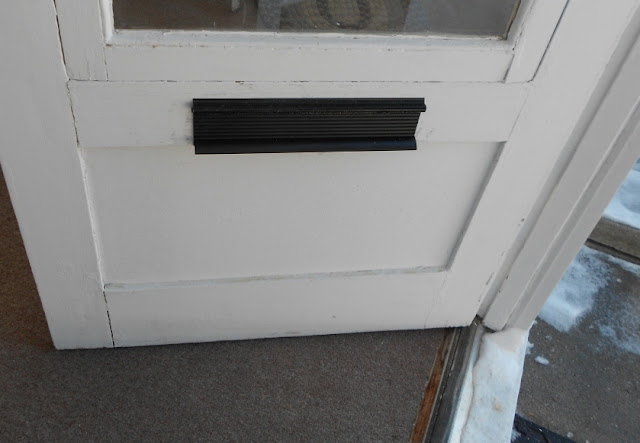 This morning as I typed this, I looked over at the doggies.. they are RAINBOW DOGS!   The light from the leaded glass window over the stairway shines down into the livingroom.... soo cool! 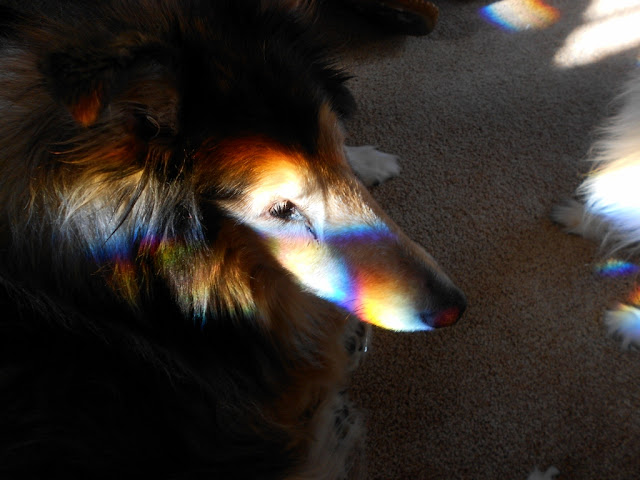 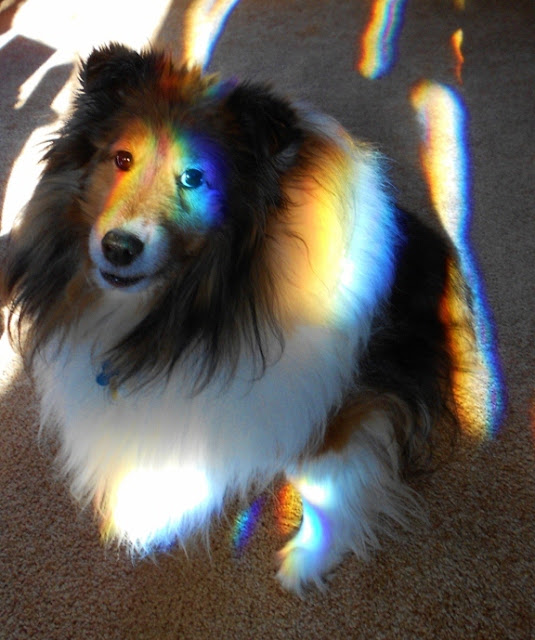 On that note, it's time to put down the coffee cup, post this blog, and get cracking.  I got curtains to hang today, along with putting away some more things we hauled in from the motorhome.  Soon the kitchen will be emptied of excess junk, and perhaps my Mr. Zoom Zoom Steveio Man might want to start on installing my cabinets and reworking some of the wiring and plumbing to accomodate the new locations for the sink, garbage disposal, dishwasher, stove and fridge.  Once the cabinets are in place, we can also move in the island work center and stools.

After that, we will remodel the bathroom.... and install the gas log fireplace!