Ah yes, some folks will think we are nuts.  We are now collecting new furniture for the "new-to-us" house!

Honestly, our other furniture would not have fit the style of this house anyhow, and we are glad that we purged all the stuff we didn't want any more.  The things we did save are the best or favorite items and will incorporate those into the house when we move in after closing Dec 31.

I sure wish the sellers would have let us rent the vacant house ahead of time, as we offered in our purchase agreement.  But heck, they don't know us from Adam, and we could be trashy, or we could be really picky and wanting to re-negotiate on newly discovered faults or repairs.  (we wouldn't do that, but they don't know that)   Just the image of moving all this newly acquired stuff, in the middle of winter of snow, slush or ice is not appealing.

Right now we are planning on storing our newly gotten things in the heated storage space we rented for our motorhome, there's plenty of room!  I have my looms set up in here so I can come and weave during the days too. 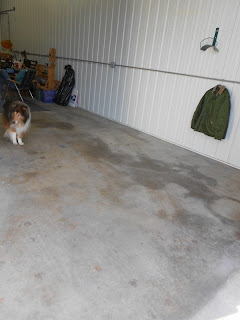 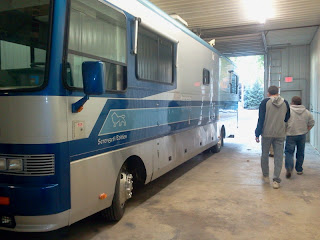 So far we picked up a used dining set that turned out to be VERY VERY heavy! 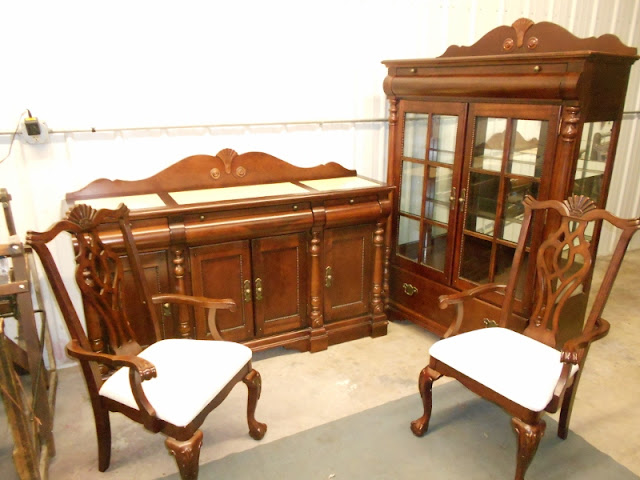 Yup... eight chairs and a rug too, all one package deal from a lady selling her home.  It's a very sad story why she had to move.  She would have split up the set if I only wanted the table and chairs, but she made it a good deal if I bought all the pieces.

So I took the whole thing, buffet AND the china hutch.  She even threw in the rug, some fancy tablecloths and the pad for underneath them.   Those are three thick slabs of marble in the top of the buffet to set hot dishes or chafing dishes on.  (heck, I don't even own chafing dishes)

We already have a built-in china hutch unit in the dining room of the house.   But we will use these pieces around the house, and keep the set intact.  I am going to recover the seat cushions as I can not see my grandtots managing well with WHITE seats??? 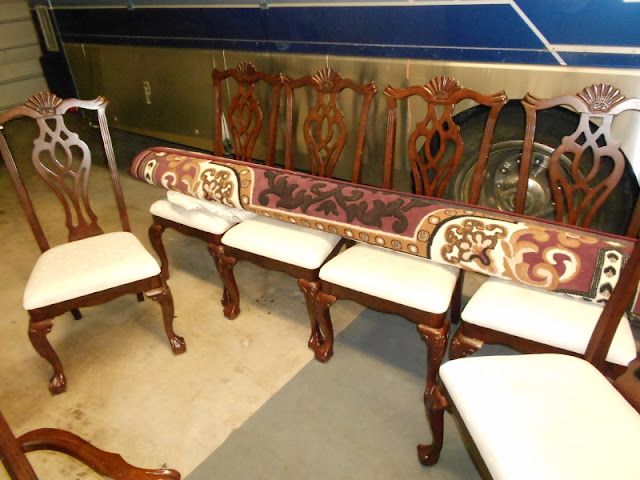 Steve set up the table.. it's HUGE with 2 pedestals,
plus there are two leaves that make it even longer!
(for all eight chairs to comfortably surround it) 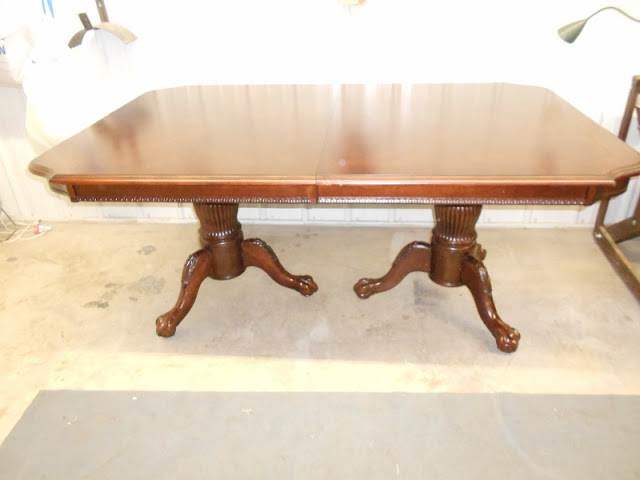 Well made and solid, and did I say HEAVY????   Steve and I struggled to get it loaded when we picked it up last night using brother Pete's trailer for the big pieces.  We set the eight chairs lapped over each other on their sides in the back seat  and trunk of the car and the back of the Tracker. 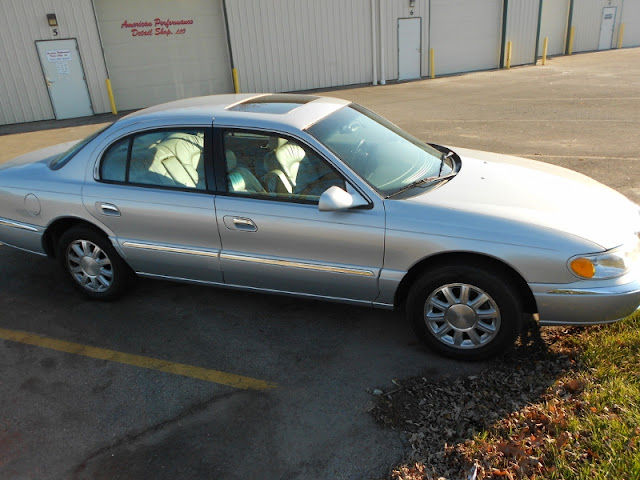 Steve was chatting with the owner of the next storage space for his gutter business.  He had bought this car for his 17 year old son.  The son, of course, complained it was a "Grandma Car" and hated it!   2001 Lincoln Continental.   So after three months, the son bought a pickup truck of his own.  Now the dad had to sell the car!  The price was right, plus he knocked off $500 just so he didn't have to list it and show it to prospective buyers.  There wasn't any room to park it at his house anymore with the new truck, so he would have been running back and forth to show it while it was parked at the shop.   $500 off made his life easier and helped us decide to buy it.

Steve said it would be good for me to run around errands while we have the house now in the area.  Plus when we do Snowbird in the motorhome for the winters, we can fly back to Wisconsin for a few weeks at Christmas and have our own car to run around in, instead of renting one or imposing on family members to haul us around. 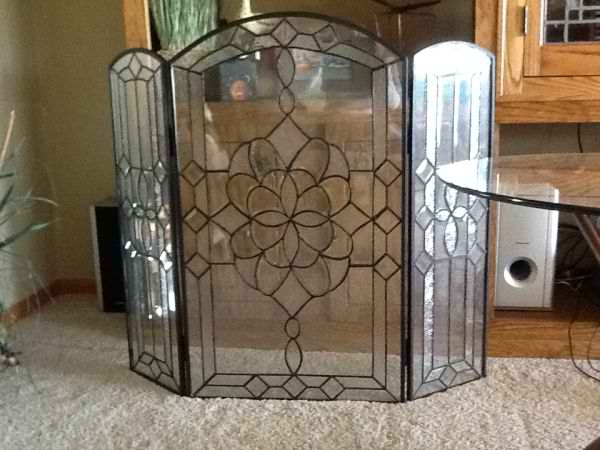 Then we found a set of wicker furniture for the front enclosed porch... Steve found this on an internet search on Craigslist., The lady was selling it during the summer and still had it.  We paid down on it the other night, and are going back tonight with Pete's trailer to haul it to the storage building too. 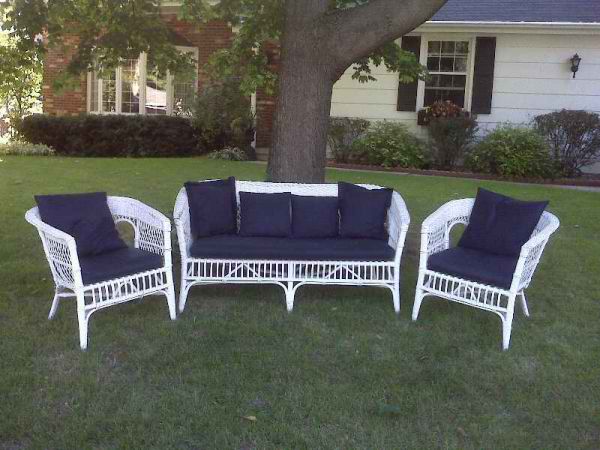 Then we decided to check out a big sale going on at a new furniture store in Appleton.  We picked out some things, and the best part is they are going to store them in their warehouse until we are ready to have them delivered to the new house after closing (and some painting) is done!

Steve found this bed...  on clearance!   and he compromised on a softer mattress.  Our last one from Verlo was "firm" for his back, but felt like a "rock" for me!  In all the years we had that bed, I didn't sleep very well.  So this time, we went softer and if he has to, we can slide a board between the mattress and box spring for his side. 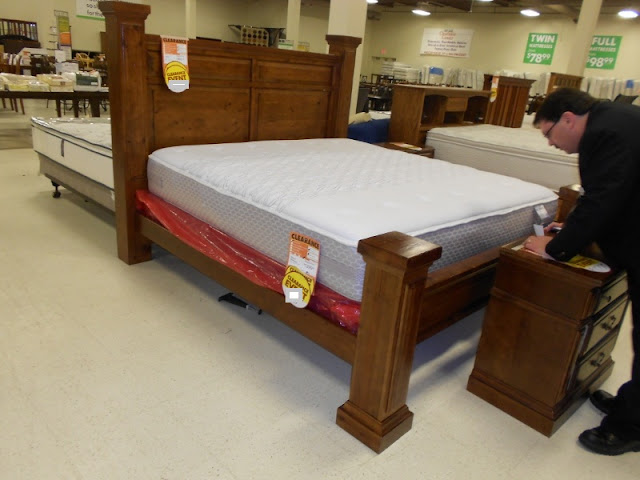 And he found the chair he wanted (it reclines too)
the flash makes it look lighter, but really it's a darker brown 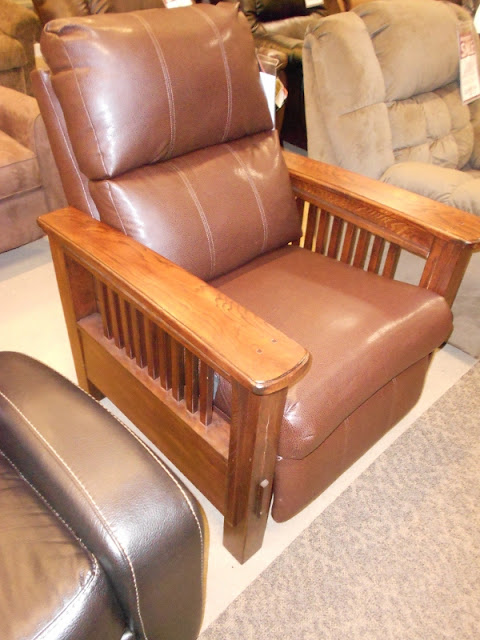 And I found the couch I wanted!!!!   it was hard to decide between couch or loveseat (only $20 in price) because the livingroom in the new house is only 13 feet wide and 12 feet long. 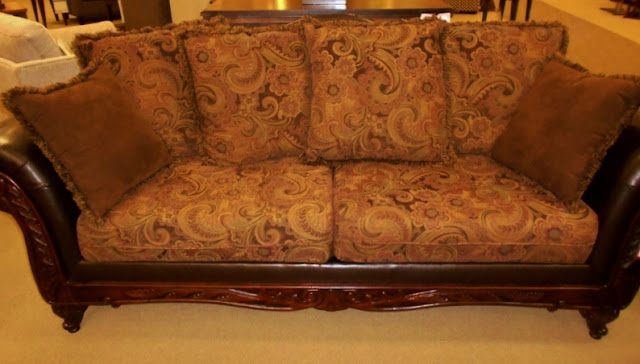 Our new livingroom presents a problem though if we buy a couch instead of just 2 chairs:


See? there are not a lot of options.

The couch is 7 1/2 feet long.   Oh boy..... or the loveseat is only 6 1/2 feet long, but feels less comfy and more crowded.  The salesman assured us we can change our minds any time before delivery and substitute the loveseat, or another chair, and adjust the price.

So we worked with a computer graphing program last night and arranged the couch form on the grid in various places in the room.  We decided we will just have to place the furniture into the room space, not on the walls, and walk around it from behind to enter or exit the room. I think it will work.


Now just a few lamps, occasional tables, and a bed for the guest room, and we are DONE!

Posted by KarenInTheWoods at 10:17 AM