Goblins and Ghosts and Grandtots, oh my!

Halloween was in full swing at High Cliff State Park.   The campgrounds were reserved and full to the brim.  People came a week early just to set up their displays and haunted houses and lit up decorations in each of their campsites.

The Friends of the Park volunteer group and the Lions club set up a pumpkin carving, a costume contest, a hay wagon ride and a spooky walk along a trail in the park.   It was advertised far and wide with many of the local residents coming to the park for the event.  Free admission to the park makes it even more attractive to the locals.

During the week, Steve had to mow along all the roads for extra parking leading to the pavilions and campgrounds, as he was told all of the parking lots would be full too.  He has a big blower attachment to the tractor and it would blow the leaves off the roads back into the woods.  He was busy for days leading up to the event with mowing, blowing leaves, clearing leaves out of campsites and blowing out water lines to the bathrooms, drinking fountains and water faucets because we are into freezing weather in Wisconsin.  The only water available was at the dump station towers, and even then they had to turn it off at night to let the water out of the standing towers and turn it back on in the morning to prevent freezing in the handles and piping above ground.  The pit toilets were available but most campers had to make due with their holding tanks and on board water for the weekend.  Best you can do when you camp in Wisconsin during the sub-freezing temperatures at night.

Soon it was SATURDAY......
It was a wonderful day because ALL of our grandtots came to help us celebrate!!!

Even the littlest grandsons were all adorned in their costumes.... 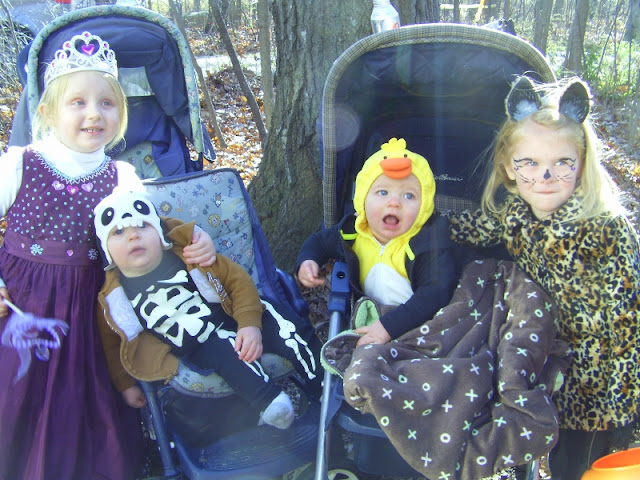 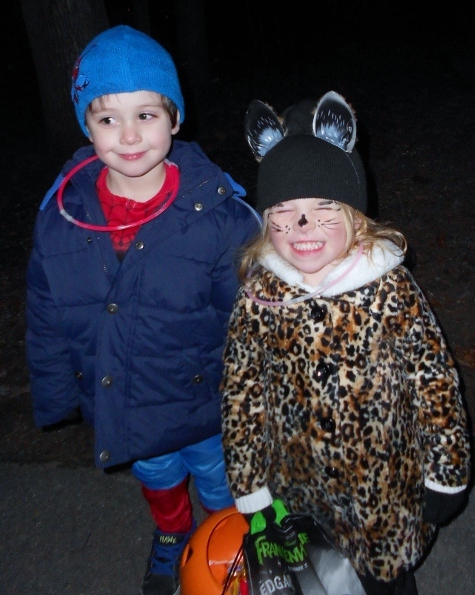 We made the rounds just looking at all the fun stuff, and then again when the campsites put out their trick or treats.  Most campsites set up bowls near the road with children politely taking out one piece each.  We went through about 700 pieces of candy, I kid you not!  We ran out about 6pm... as did many of the other campsites. There were 112 campsites in the park, and almost all had decorations and treats for the kiddos. 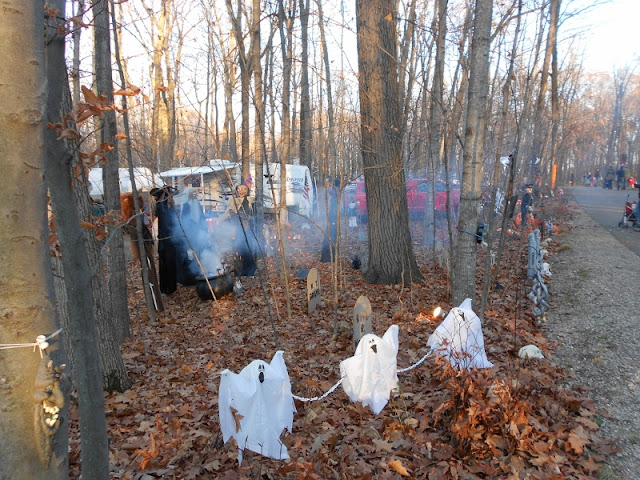 Some sites had moving displays, inflatable decorations, eerie lights, and even smoke machines.
Some sites even handed out "Adult Treats"  such as this neighbor with shots of flavored schnapps, some had jello shots, and another one was passing out beers to the adults. 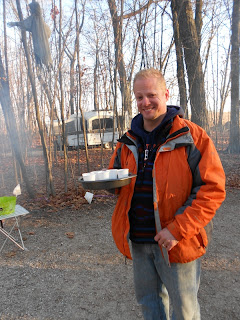 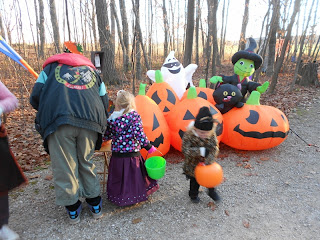 The autumn woods was alive with pumpkins and ghosts and witches in the air! 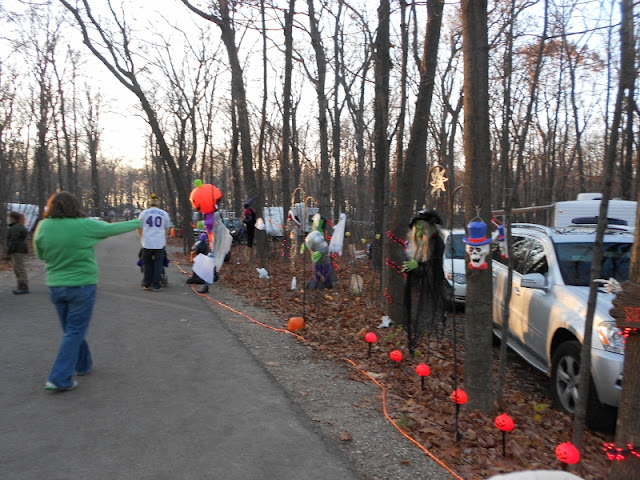 One site had set up a ghostly walk in the woods with a path lined with tombstones, each displaying a funny epitaph.  Another site had set up a whole portable garage of electronic fun stuff behind panels of plexiglass, with rows of doorbells to push the buttons to activate each one.   It was hard to get our grandtots out of that one.

Our site was a little "tame" because we started out on a non-electric site first.  So I only had some battery LED lit japanese lanterns and inflated decorations.  Later in the morning, we were able to move over to an available electric site that came open, so we quickly moved the decorations over to the new one.   I made up a few more ghosts outta kitchen garbage bags, inflated some zip lock bags for heads inside of them and wrote on eyes and mouths with magic markers.  Good enough!  I think next year I will need to beef it up a little more, eh? 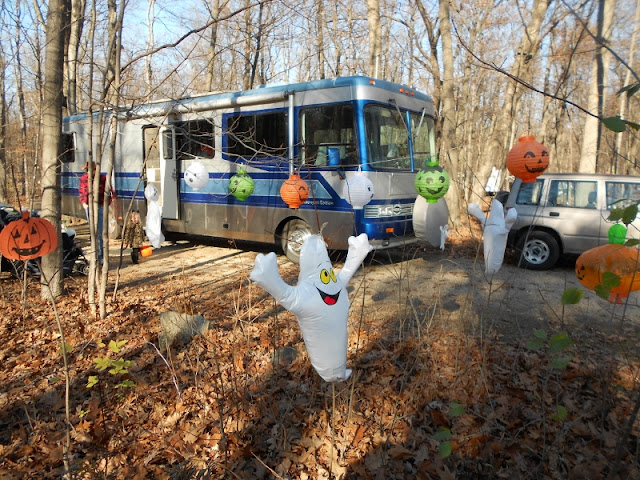 As it got darker out, it was even more magical and fun.
Glowing lights, campfires, eerie music and laughter rang through the park throughout the evening.

(I am also a Halloweenie Baby, so the grandtots helped celebrate my birthday too) 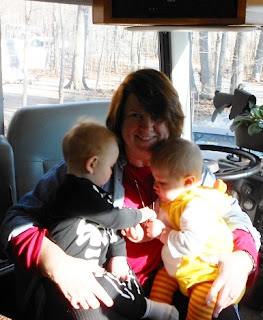 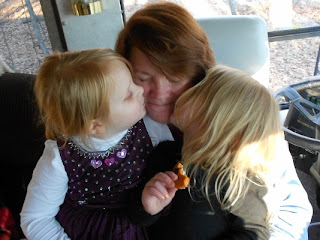 After having some sloppy joes, hot dogs, and other assorted snacks,
the wee ones helped to blow out my candles.


Sharing my day with the grandtots was the icing on the cake... err cupcakes! 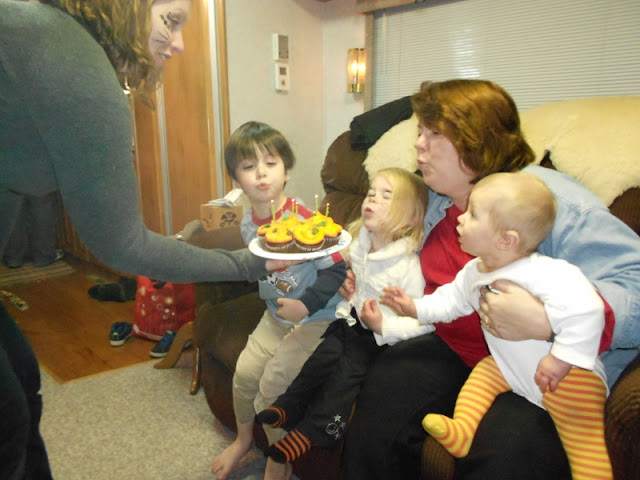 The kids gave me such wonderful presents, as did Steveio.  I got my favorite brand of flavored coffee, and some gift certificates for quilting and knitting yarn supplies.  Silly little Chelsea had posed for a birthday card making her "Crazy Face"! 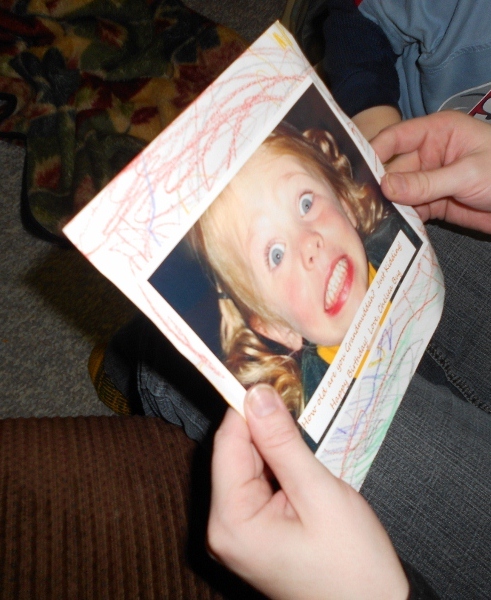 On Wednesday, my actual birthday, Steve is taking me out for a birthday dinner.

Snuggles and cuddles,
with all my Little Grandtot Goblins.
Ahhhhhhhhhh 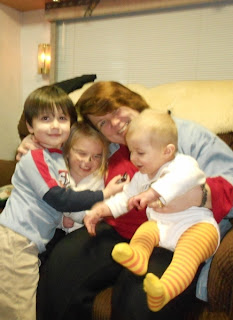 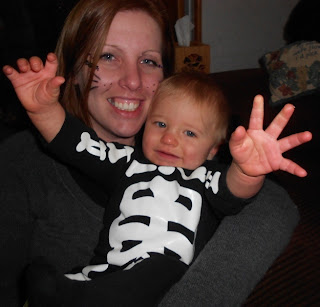 They all took time to jump on Granfaddah and Granmuddah's bed,
which has become kinda a tradition now in the motorhome.
Why? I don't know.... probably because I let them get away with it?
They jump so fast they are only a blurrrr in the camera!
Must be the sugar high from all the treats???
We read a Halloween story and calmed down a bit later. 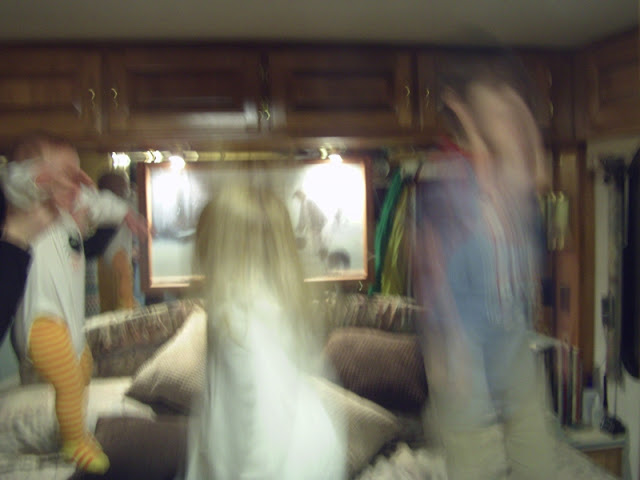 And this last parting shot happens to be my favorite picture of the day...

The two youngest grandsons, both are 7 months old.

Clayton: "Hey, you got bones!"
Mason: "Yah, but they don't walk too good yet" 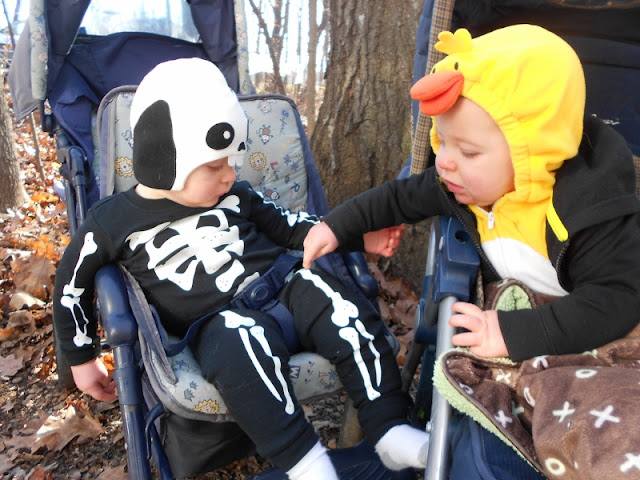 
Posted by KarenInTheWoods at 8:19 AM