Temps are due to dip down into the 20's.....  we put my hanging flower basket into the Tracker to keep it from freezing. Maybe we can get a few more weeks of blooms out of it if we are careful.  I have had it since Mother's Day and hope to keep it a bit longer. Heard there is 1-5 inches of snow forecast for the U.P. of Michigan this weekend.  Brrrrrrrrr

I drove Steve over to the maintenance shop this morning, (that long 1.6 mile commute)  and kept the Tracker for the day.  Our kids Heather and Jesse are celebrating their anniversary this weekend, so we offered to take little Jameson down to High Cliff State Park.

I scooped him up, along with his winter coat, hat and mittens for his weekend attire at the campground.  On the way to the park, we stopped at a roadside stand to get some pumpkins! 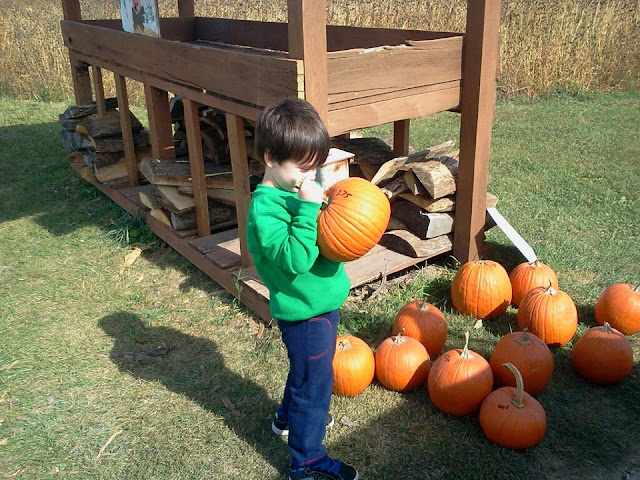 He picked out three of the best ones, and we loaded them into the Tracker.  He will help me decorate them with black foam cutouts and a glue gun.  That way I can bake them later into pies.  All of the campers here in the park are gearing up for the Halloween season already with decorations and lights are adorning almost every camper.  So we also stopped at a dollar store and stocked up on decorations.  We will wait to put them out once the winds die down, as tonight they are in the 20-30 mph range.

I tried to get Jameson to nap in the afternoon, but that only developed into a "Monkey Jumping On The Bed" routine.  So we played around outside and walked the dogs for a bit.  He was collecting the hickory nuts and acorns, just like a little squirrel!

Park Ranger Amanda also gave Jameson a "ranger badge" sticker for his High Cliff sweatshirt.  Now he said that he can arrest Granfaddah for speeding, and he said Granmuddah ALWAYS stops at the Stop Signs, so I don't get a ticket!  LOL 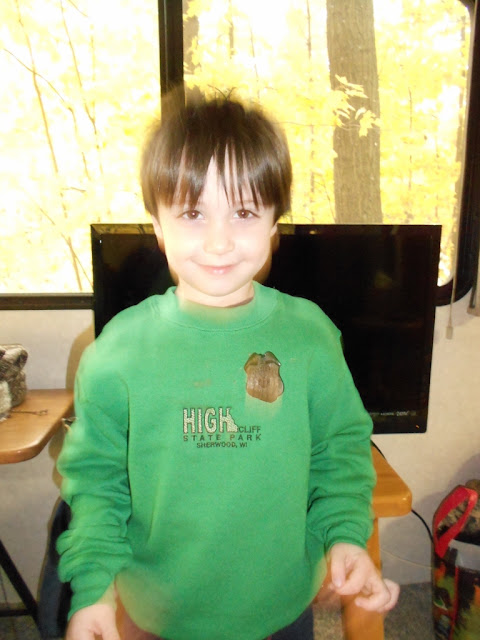 When Granfaddah was done with work, we drove over to his workshop to pick him up, and then headed back to the motorhome to make supper.  Jameson helped arrange these little pizzas (Pillsbury Grands flaky biscuit dough split in half and squished out flat, then pizza sauce, pepperonis and cheese) 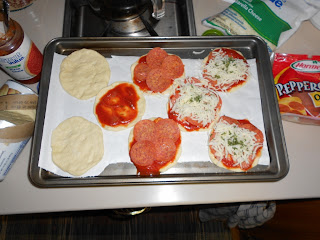 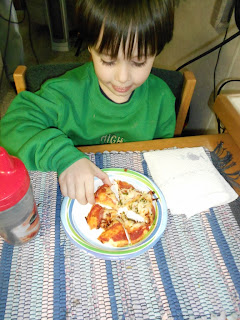 What a treat!  That little guy gobbled up two of them and the rest of my second one!


Before it got dark, we headed out for the playground and shuffled in all the leaves along the way.  It was delightfully crisp and cool, and the winds were dying down as evening fell over the campground.   The dogs enjoyed getting out and about too. 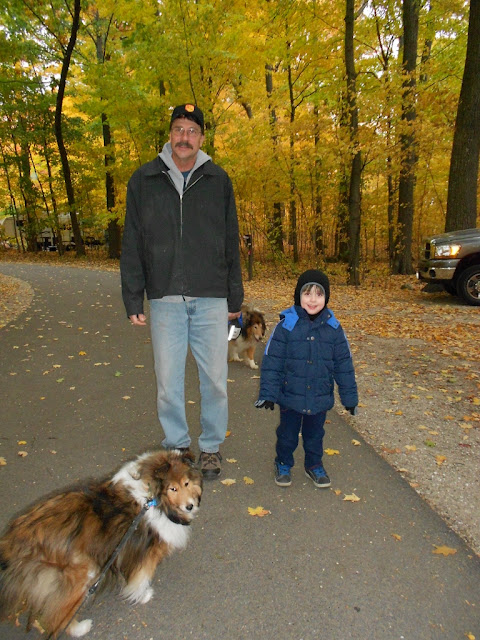 We walked around the loops, admiring all of the decorations and efforts to bring Halloween into the season all month long. Crunching our way through the leaves, making rhythms and beats with our feet, I recalled a time on my way to Brownies when I was crunching through the leaves.  I was 8 or 9 maybe and remembered wanting to keep crunching and rustling the leaves under my feet instead of going to the meeting!   I told Jameson about that, and he just looked at me with that secret smile of a child.  He knew the feeling.... 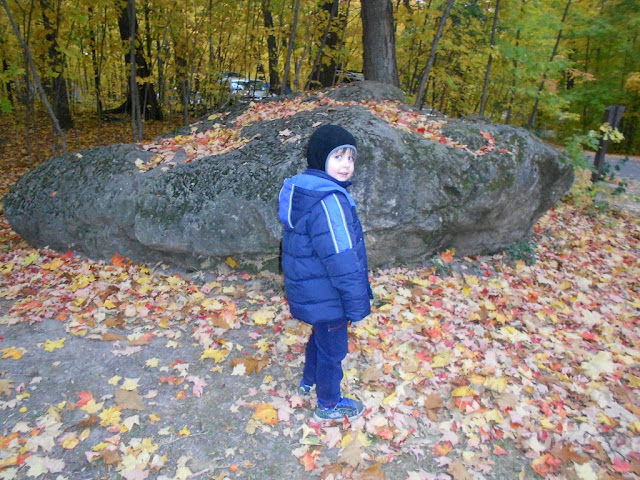 We had such a fun time at the playground....
Imagine his surprise when Granfaddah came down the slide after him!

Before bedtime, we decided to heat up the motorhome a bit with some baking!  All my grandtots learn to bake chocolate chip cookies.  Plus our secret touch of adding extra chips to the top of each glob of dough, for extra full chocolate gooey goodness.   Excess chips go IN the mouth.... 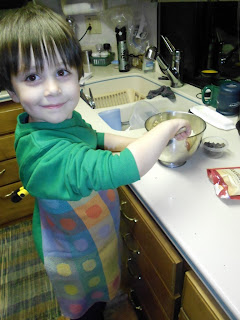 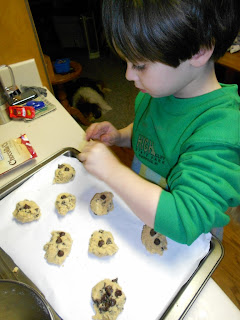 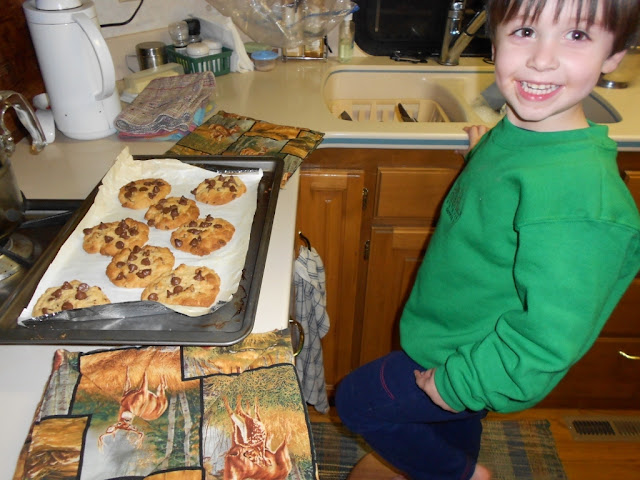 Finally it was time for BED!   Jumping into Jammies, then teeth brushing, and a final hug and kiss... and crawling into his Blues Clues Sleeping Bag.   Granfaddah kept a dutiful eye on him (well... on the laptop next to him)  till the wee man was asleep.  And yes, he fell asleep in about 6 minutes.. no kidding! 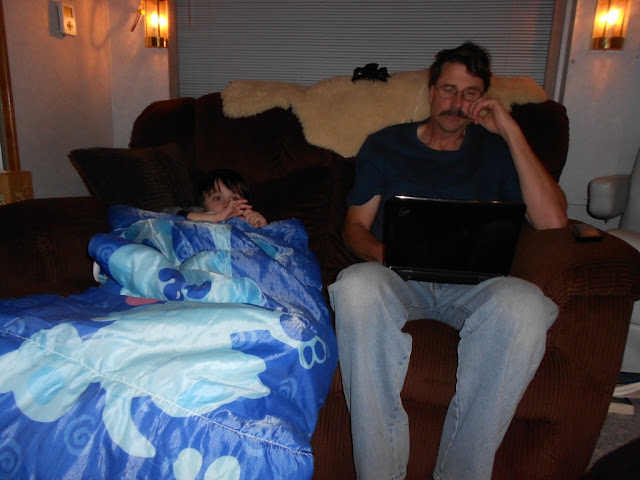 And now we are ready for bed, too!

Posted by KarenInTheWoods at 9:07 PM