Ahhhh we were able to sleep in till 8 am this morning!   The doggers didn't wake us up or beg to go out at 4:30 or 5 a.m. as per normal.  I guess we wore them out last night so they decided to sleep in too!   It was sooo pleasant to wake up next to my sweetie and relax and enjoy the morning together.

Speaking of dogs...  I mentioned yesterday about how our muttenheimers lay in the narrowest part of the motorhome!   Butterbean C commented that if we had a rig with slides, we wouldn't be stepping on the dogs.  Perhaps... but these guys look for the NARROWEST spot, even a door way to the bathroom or any where we might be passing by. I swear it's on purpose!

Here is a pic to prove my point: 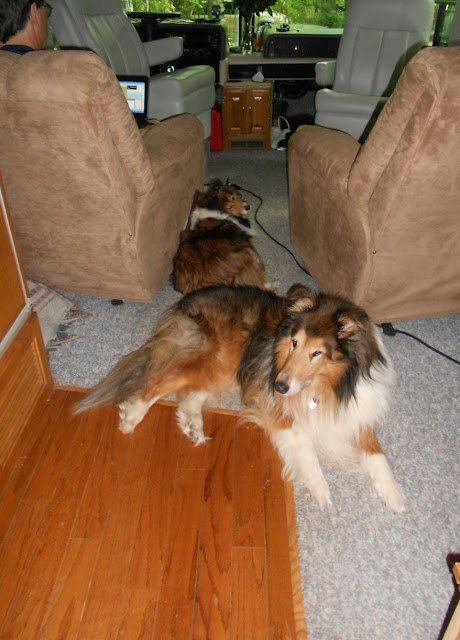 There is plenty of room on the floor ahead of our chairs...
or up in the area between our drivers and passenger seats...
or in the kitchen along the table or the counter...
or even near the doorway entrance area looking out...
But no, they have to congregate at the narrowest part between the two recliners!   Now we HAVE to step over, among, between and on top of them.  LOL

Sometimes we turn both recliners to one side wall or the other, olacing them side by side.  Then there is a big space across from them that is wide open along the other wall.  Where do the dogs lay then?  Right in front of the recliners to get in the way of the footrests... bwaahhhaaaahaaaaaa

I think they do it on purpose?


As for the morning, my anniversary roses opened up wide today, and smelled sooo good!  They look so pretty on the dash looking out over the campground. 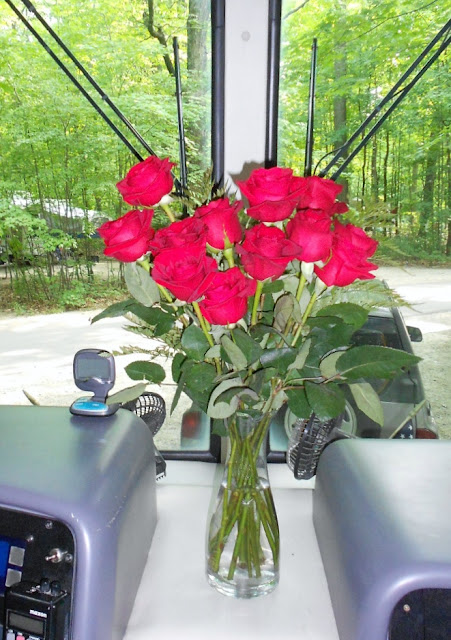 Guess I am gonna have to find a spot in the cabinets to keep a vase in here.
if my sweetie keeps giving me flowers, eh?

We were due for another hot day here in Wisconsin.  So before it heated up, we headed out for a walk around the park.  The campground is up high on a ledge of limestone, called the Niagara Escarpment.  Here is a shot overlooking Lake Winnebago.  Our path wandered among the dappled sunshine from the trees as we strolled along. 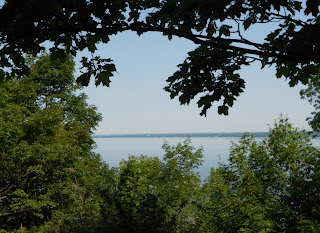 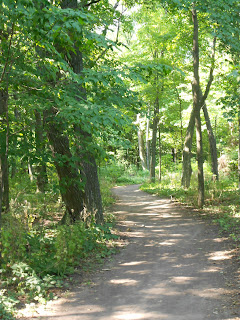 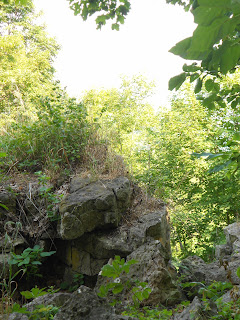 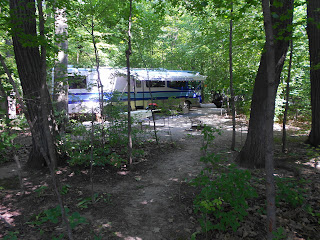 Before it got too hot, I wanted to bake up some white cake mix into some squares to use for dessert with fresh strawberries for dinner.  I decided to try to use my convection oven (which I have had a distinct dislike for) ....   I didn't want to bother Steveio to take out my Coleman portable propane oven to bake something for 15 minutes.  He was busy with another project.  So I mixed up the cake batter with resolve to try ONE MORE TIME to love my convection oven.  There was enough batter to also make 6 little cupcakes too.  I figured of the cake was ruined by the oven, maybe the little cupcakes would work out?

Well, I set about to preheat it up, and a funny thing happened.  It didn't make it's normal obnoxious tinny rattly vibration noise!  It was kinda quiet with a nice hummmm sound.  What the heck?  It sounded very different than it had in the past.  Oh well, I popped the cake and the cupcakes in and sat back to watch.  OH MY!~   It baked perfectly!!!  Usually on the convection cycle it would make my cupcakes lopsided, the fan inside would kinda "blow" the batter to one side or another.  It would normally brown on one side and leave raw dough on the other.   But not this time!  I have no idea why, but something must have been bad or out of sync or misaligned before?  Maybe something rattled into place and it works fine now? 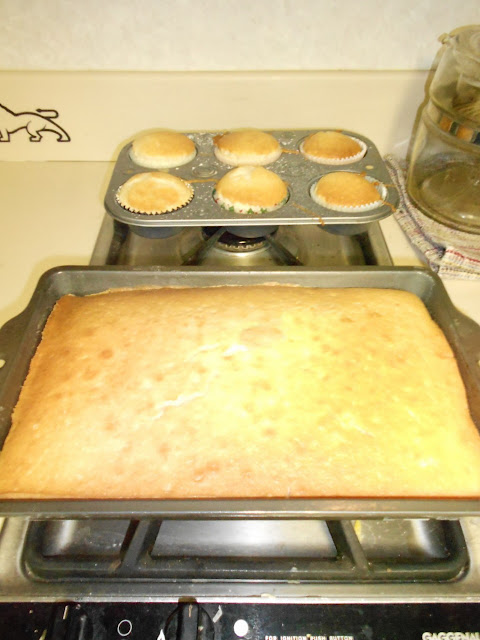 As the day got hotter, we moved indoors and Steve found a job to keep himself busy.  A large drawer in the bottom-most cabinet needed new drawer glides.  I plan to keep some heavier canned goods in here, along with the bucket of dog food and bag of doggie treats.  (more on those later)

He got out his tools and got the glides all figured out.  They are much stronger than the original roller type, these utilize ball bearings instead.  He had his reciprocal saw because he had to cut out a small section the cabinet for clearance on each side.  Once the drawer is shut, you don't see the part he cut out. 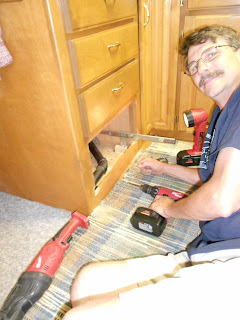 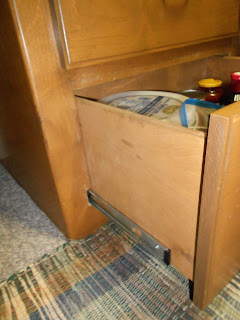 And Ducky is happy to have her drawer working again.  She is used to "stealing" her treats right out of the open Zip Lock bag... as I open the drawer each morning to remove the bucket to fill the dog food dish. She has become a thief to steal the biscuits right from the open drawer behind my back.   My oh my, such a tricky girl! 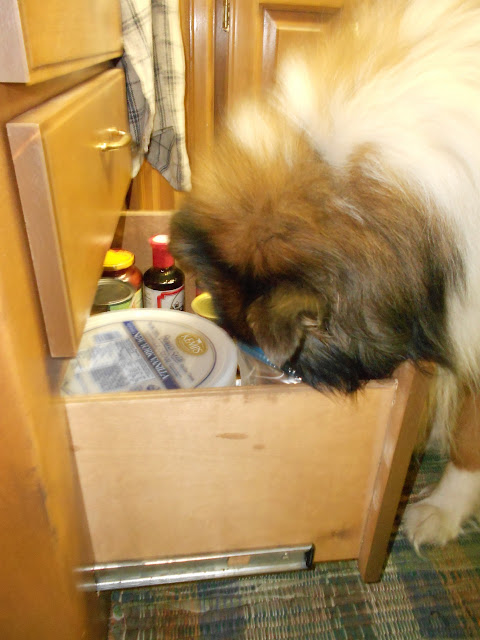 She seems to be feeling better today, and walked around the loop without mishap today.

Around suppertime, Steve's baby brother Pete came around on his motorcycle...  we had invited him over for a Birthday Dinner!   He lives in nearby Menasha and it was just a short jaunt over to the park.  Steve grilled up some lovely steaks, and I whipped up a salad and some baked potatoes (again, in my convection oven and it worked PERFECTLY!)   ....

and yes, we had our strawberries and cake squares for dessert 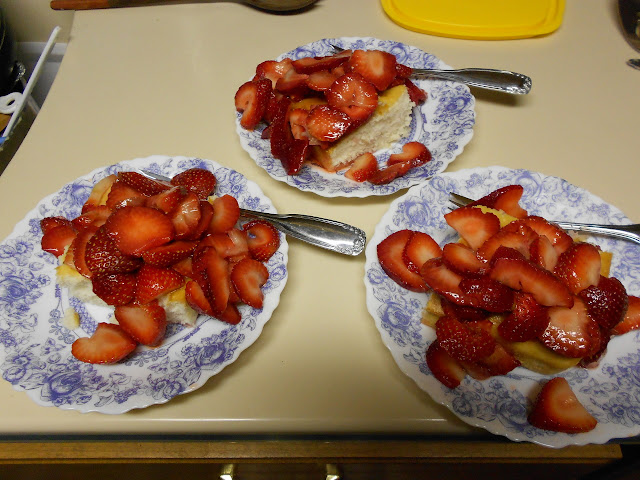 Pete and Steve enjoyed a little guy talk while I took the doggers for a walk around the park.  They even got in a few matches of cribbage before it was time to mount up on his motorcycle and head on home. 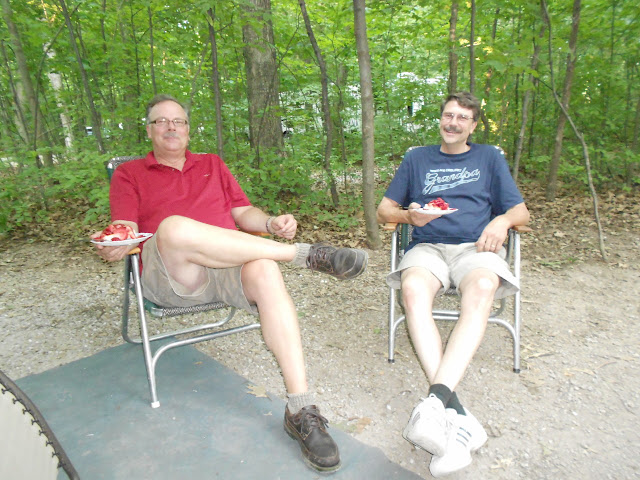 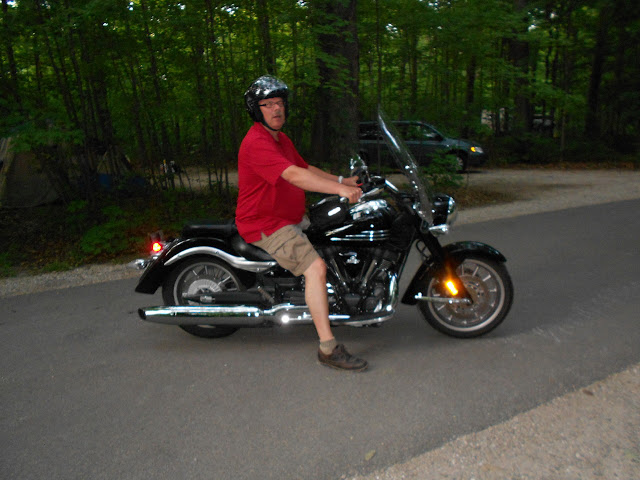 Looks like we are due for a few more days of heat and humidity.  No break till later this weekend when it might get back down to the 80's.  For now, we can deal with it by being in the cool woods, and having power hookups for the AC to run.   It really don't matter to me, because we are CAMPING!