Winter has come to Wisconsin

Arrrggghhhh I suppose we should count ourselves lucky.  We folks up here in Wisconsin have dodged the proverbial *S*N*O*W* bullet long enough.  It's been amazingly warm and snow-less.

Don't get me wrong, I am not a Winter Weenie.  I grew up in Wisconsin and spent my teen years in Michigan's UP, I know winter.  I have snowmobiled, ice fished, iceskated, skied and sledded with the best of them.  But I think once I have reached that ripe old age of 50, my fear of slipping and breaking bones has overtaken the daring need to conquer winter conditions.  I will still drive in the snow, but if I can stay home and avoid going out, I will.

Soooooo today it started.  I should not complain, because we are usually snow covered from early November on through till late April.  It looks like our getting by with 2 and half months being almost snow-free has been a freak of Wisconsin Winter habits.

I think part of it is because of last winter going for 7 weeks out west and in the desert (check my archives from mid Feb till mid April 2011)   It sealed the deal on our preference for spending time THERE instead of HERE once we are retired.   We will be back from May-Oct in Wisconsin visiting family and camping with everyone.  And the delicious thought of being able to stay on at a campground while everyone else is packing up to go home on Sunday is enticing.  We look forward to being able to stay as long as we want and move on to the next location at our own pace as purely delightful!

As I have said, winter is here.  Today I watched about 15 fat old turkeys waddle along the river bank by our house.  I grabbed the camera but the battery was dead.  So then I grabbed the video camera (which also does digital pics) and snapped a few shots as they were wandering into the woods.

When I took these photos, the snow had just been starting.  Now we have a couple of inches on the ground, and it's supposed to snow all the rest of today, tonight and all day tomorrow.  ICK! 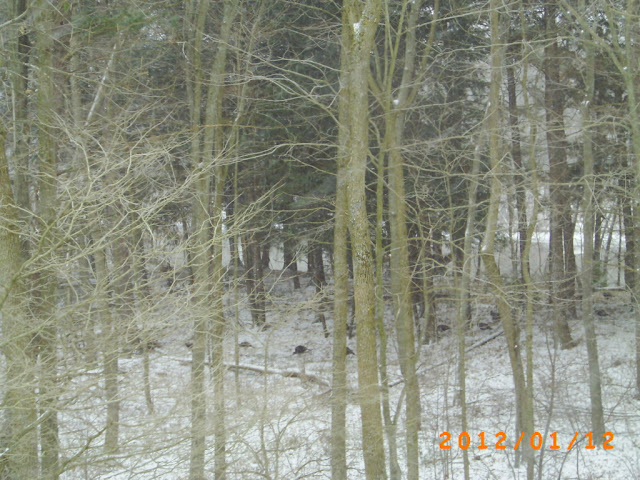 Funny how smart they are during hunting season and elusive and sneaky.... but once the season is over, they waddle around in plain sight and don't even care if you are driving into them on the road.  They make the cars slow down!!! 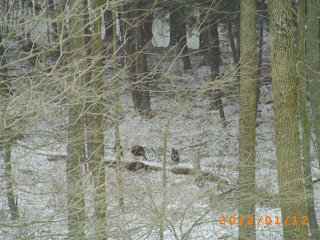 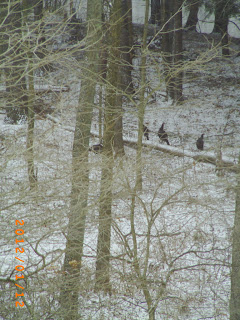 Once we hit a turkey with the motorhome and it scared the beejesus outta us!   Luckily we only bent a little bit of a trim ring around a light and had a scuff of feathers.   I had envisioned shattered fiberglass and destroyed grill work.

My planned little baking session with Chelsea screeched to a halt yesterday.  I went to pick her up from the daycare about 3pm and they said she was sick!  She was running a fever, had urped up some food, and even her eyes were glazed and dull and her cheeks were pinkypink.  Awwwwww  Her little congested breathing and coughing just tore at my heart.   Instead of coming to our house,  I brought her to her house for her mommy to take over the care, and we put the apple pie baking plans on hold.  I didn't want to catch it either!   Today her Daddy stayed home from work with her, so she got a full day of being a Daddy's Girl, and tomorrow Erin has her 2 year checkup already scheduled with the pediatrician, so she will be checked out and hopefully doing good by Saturday. It's her big girl 2 year old birthday party on Saturday, with all her cousins, and grandpas and grandmas and even Great Grandma and Grandpa Pfundtner if the roads aren't too bad!

Watching the news right now, the roads are slippery, lots of accidents of people who forget how to drive on the roads in winter. It's always like that for the first storm or two.  The gusting winds are making it even more slippery and difficult.

It's a big Packer Weekend this Sunday with the playoff game in Green Bay.  Did you know that when it snows before a game, that Lambeau Field puts a notice on the local news to come to the stadium and hopefully get chosen to be a SNOW SHOVELER???  It's an honor!   And you have to be 15 years or older.  You are paid $10 an hour and they furnish the shovels.  You work in rows shoveling the snow off the bleacher seats and walkways, onto long slides that loads it down into trucks at the bottom where the snow is hauled away before the game starts.  Some teens even BEG their parents to call them in sick to school so they can go to the stadium and shovel snow!!!  People come from miles around to be honored to be picked as snow shovelers and line up hours in advance.  They are disappointed to be turned away once the 400 or 500 people are chosen.   I am sure many of them would do it for FREE!   Only in Green Bay, hey?

Here is video link of how it is done:

Need Cash? Come to Lambeau Field on Friday morning!
This afternoon, I went out to get the mail and trudge over to the neighbor's house to let out his dogs.  Bundled up like an eskimo with boots, hat, heavy mitts and jacket.  I threw their frisbees for a while and then let out our own dogs.  Our dogs just do their business and run right back into the house.  The whipping winds chilled me right to the bone, so once I got back in the house, I hopped in a hot steamy shower.

Steve just got in the door here from driving home from work, going 38 miles in this mess, and he said the roads were quite slippery and cars in the ditch too. Glad he is home and I don't think we are going anywhere tonight.

Ahhhh  Yes, I guess I could be turning into a Winter Weenie?