To get through the long boring winter, I am going through our Motorhome Modifications from A to Z...   to help make my blog interesting to the RVers who follow me, and not have it only chock full of my fiber items I am working on.   These are items we have done over the last 5 years to our Safari Serengeti motorhome.


The next mod group coming on deck starts with the B's.

First we have Backup Camera!

Our Safari motorhome came with a backup camera already installed in a cute little bumped out part of the back fiberglass cap.  The camera can be accessed through a trap door panel inside a back cabinet over the bed. From time to time we had to remove the panel and clean the inside surface of the plexiglass. Finally one time, Steve realized he could wiggle the plexiglass when cleaning it, plus it was yellowing and showing scratches.... so he removed it completely, got a cut disk of real glass, and ran a bead of silicone around the edge and replaced it.  No more dust and dirt getting in there.

One time a fly got in there, it was like a massive horror movie of the HUGE fly that ate the garage behind us!!!  hahahahahaha 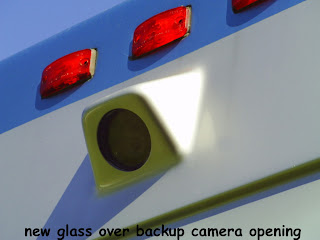 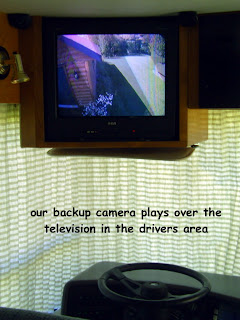 When the camera is activated by flicking a switch in cockpit, it shows through our television screen over the front driver's seat.   It is very helpful when seeing behind the rig when maneuvering around in parking lots or gas stations, because usually little cars scoot around behind you if you are backing up, (when the Tracker Toad is not hooked up)   or if someone tries to steal the space right behind you, not giving you any room to get out again.  arggghhhhh   It's also helpful to me when backing into campsites if Steve is not along outside guiding me.  I like it better than the small add-on dash top models we see in cars.


Even when we replaced the old television sets with new digital/analog ones, the camera connections still worked on the new tv, but just show everything in reverse.  Our new tv does not have a "reverse" mode like some do.   I don't care that the view is flip flopped, just when I see ANY movement back there, I stop and check it out. 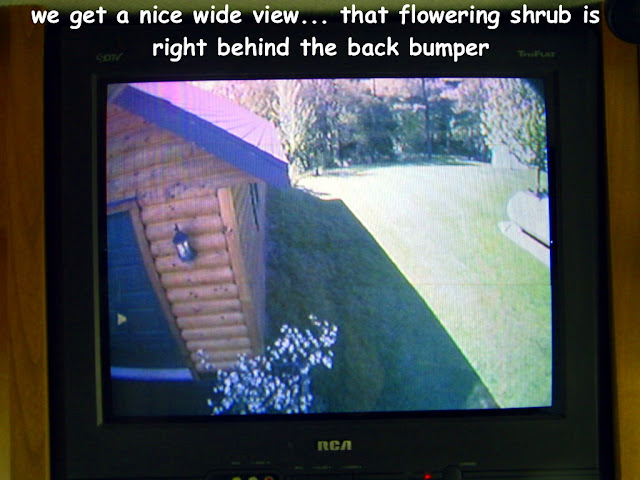 When we drive down the highway, it gives us a clear view of the Tracker Toad behind us.  It's called a "Toad" in RV terms... get it? Towed? Toad?  LOL   We tie a white rag to the steering wheel at top dead center so we can see the rag move when turning corners, thus knowing the wheels are tracking properly and turning too. 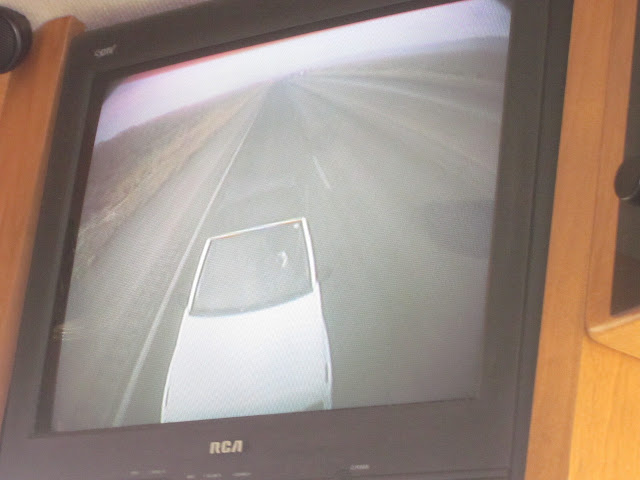 The reason for being concerned if the wheels are turning is important.   When towing, we need to leave the Tracker ignition key in the ON position so the steering wheel doesn't lock up... and if it accidentally gets left in the OFF position and locks, you can ruin your tires, alignment or possibly even start the toad on fire by dragging the tires down the highway with locked steering!

When we first take off, the camera is on and we check for the rag after the first corner to be sure it's moving around and flips back upright again.  With a dark interior, the white rag really helps us see the steering wheel.

Steve doesn't leave the camera on all the time when he drives, he just flicks it on from time to time to check it. I am usually the one checking it more than he is.  (worry wort)

The camera switch activates our inverter each time you turn it on, which in turn can draw on the alternator, so Steve doesn't like to leave it on all the time.  (we had replaced 2 alternators already over the first few years before we started leaving the inverter OFF when driving)   We used to keep the inverter on to not only power the camera and the tv, but also at that time my laptop and router too.  Since then we bought DC power cords for those things so we don't normally need the inverter on anymore.

When I drive it, I still leave it on all the time.
Replacing another alternator is worth the peace of mind for me.


Next up is BATTERIES!

When we bought our rig, it had four brand new 12 volt Interstate coach batteries included in the sale of the rig.  (and 2 chassis batteries for the engine)   That was over five years ago.  One went to heck in the first year, and we had to remove it from the group.  Then two of them were not holding charge as well as they had by the next year.  One of those started bulging out on the case.  We were finally down to one decent battery.  ACK!   Also at that time, our original equipment solar panel installed by Safari was really overcharging the system, and it had NO solar controller anywhere on the system.  It was only an 85 watt panel, but we realized it was boiling out our batteries and causing them to deteriorate.

We added a solar controller to the line, and learned a lot about solar in the process.  At that time we planned an upgrade of more panels as soon as we could afford them--- more on that later when I get to the S modifications ....  We invested in four brand new six volt batteries deep cycle instead of 12 volt ones ... right before our trip to Florida.

We found the best price to be the Werker batteries at Batteries Plus in Green Bay.  Paid $87 each, but that was in 2009.

Caution: there is a difference between true "deep cycle" and what they call "marine" or "dual purpose" batteries.  Do a little research and find out more before getting the wrong ones.

At that time, we really wanted to get Trojan T105 batteries, but we could not afford them right before vacation, nor did any place in Wisconsin even have them in the middle of winter.  They are commonly used in golf carts, and of course in winter, there aren't too many golf cart repair shops even open. LOL We even tried calling a few golf courses, hoping to buy some they might have in stock, but nope, nothing doing in the middle of February.


Here are some helpful diagrams I found when using 2 or 4 of the six volt batteries. 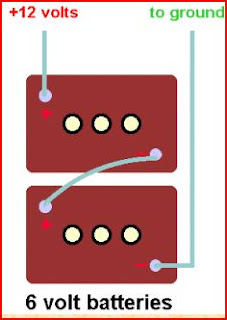 It doesn't take much to make an RVer's heart warm than a new bank of batteries!
So pretty, huh? 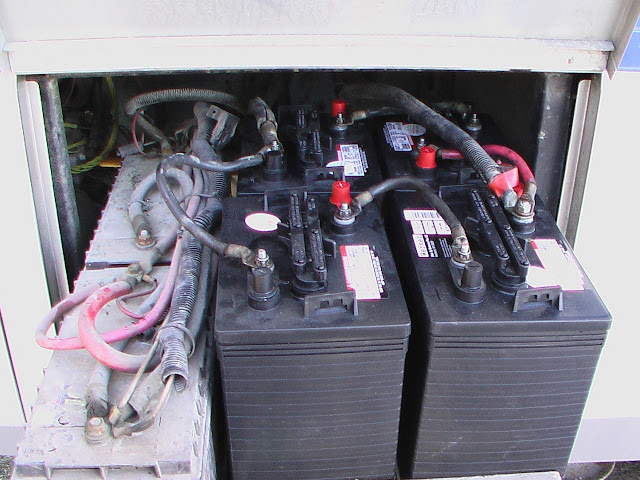 The frustrating part was when we got home with the batteries, the pull out drawer had grooves for the 12 volt size batteries, and the 6 volt batteries are a tad bit wider.  So on a winter day in February, Steve re-vamped the drawer base with treated lumber to raise them up a bit, and set them into place with screwed in wooden brackets to prevent slipping and sliding.  To top it off he also strapped all around the six batteries to keep them secure. There.. we were "Good To Go" for our trip with all new batteries! 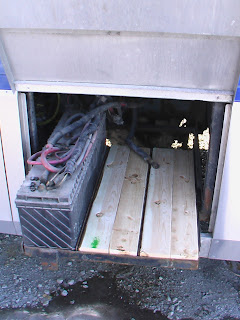 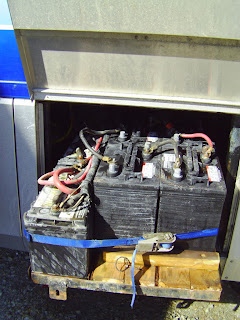 Steve regularly checks the levels of the battery with a hygrometer, and only uses distilled water to top them off.  Our Heart Interface Inverter has a high level cycle called "equalization" to burn the buildup of sulfates off the plates, and he does that on a regular schedule too.  These batteries are holding a charge and operating correctly now.  A year after the new batteries, we added a lot more solar, and a much larger controller, so the system is now effectively powering up our rig for all our boondocking needs. 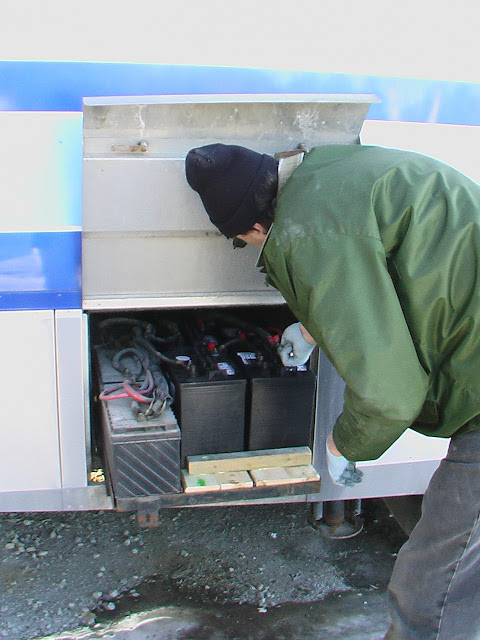 Someday in the future we will upgrade to Trojans T105's and probably go to six of them.   Steve made a study shelf/bracket to move the two driving batteries into the engine compartment, so there will be more room in the drawer for six Trojans.  But for now, the four Werker batteries are doing just fine.

On a fiber note, last night I was sitting and knitting, getting a lot more socks done and stocked up for my online stores.   I was watching my new favorite show....  called "Revenge" on ABC.  This year's lineup of evening television viewing has not been of any interest to me at all, but this one show is getting good.  I have enjoyed Emily VanCamp's acting since her days on Everwood, and then on Brothers & Sisters, so I have been making a point of watching this one show.   It's either that or PBS, or the old reruns on MEtv like Cheers, Taxi and M*A*S*H.

With no Packer Game this weekend, I think we will have to find some projects to work on.....

Posted by KarenInTheWoods at 12:32 PM