Yes, it was a devastating loss to the Packer community around here.  Not only didn't the team preform as expected, but the anticipated business of having some more play-off games in the area didn't unfold either.

Oh well, we love our Packers anyhow, no matter what.  We just can't expect Aaron Rodgers to throw, catch and run for all of the touchdowns or to carry the team either.  Some of the team needed to show up to play, which it seems they didn't even try.  Sigh.


The rest of our weekend was delightful, because we had a grandtot birthday to celebrate!  Our littlest granddaughter, Chelsea, turned TWO!    And we all gathered at Erin and Mark's house to have her party. 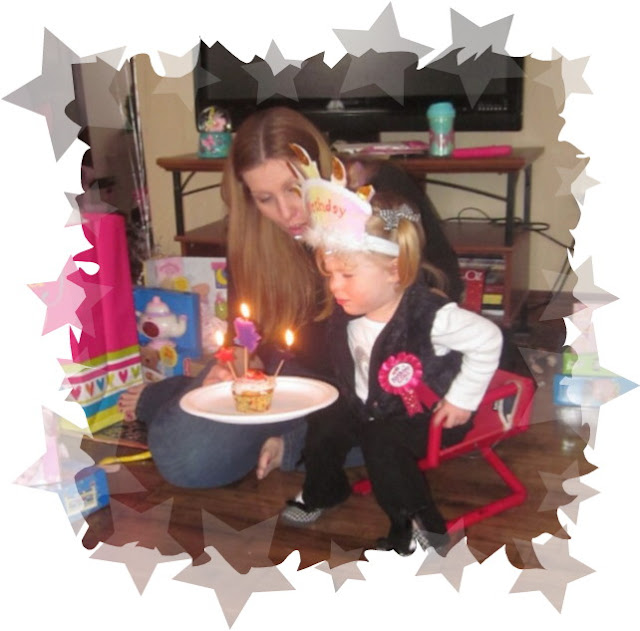 The guest list included all of her little cousins and one friend... the girls hung out in the playroom, doing their "Girl Things" at the little picnic table that Chelsea's daddy, Mark, built for her.  How cute is this?  I felt I was intruding on a "Girl Thing" moment when I snapped this picture.  "Granmuddah, get out!" 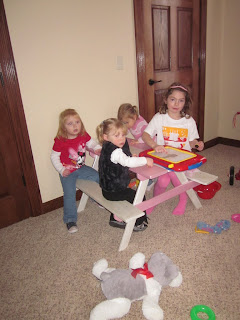 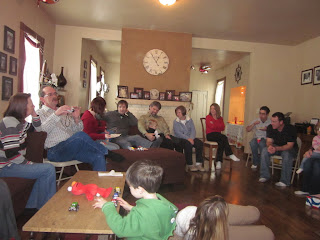 All of her grandparents, great grandparents and aunts and uncles came too!  It was a houseful with 18 adults, and five kids!  We had a soup n' sandwich buffet,  Erin put out a variety of sandwich makings and salads, and Steve made up a big pot of homemade chicken vegetable soup.  Yummmmm
The little Birthday Girl had a good grasp on the present-opening-process, after just being through Christmas, she had good practice.  Such concentration!   Here is a shot of me with our daughter-in-law Heather, expecting our new grandson in early April, and my dear mother-in-law, Mary Ann on the far right.
Erin is also expecting another grandson for us, a week after Heather!  Adding 2 more the crew!! 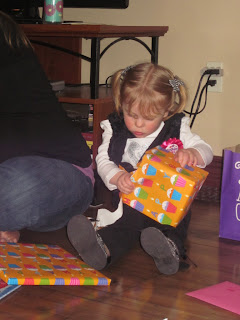 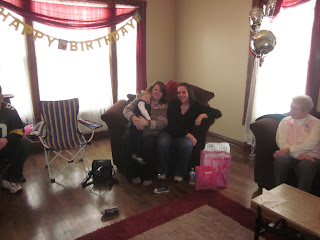 Our son Dan, to the left of Steveio, is sprouting a fuzzy beard, to be shaven off after the new baby comes. Why, I have NO idea!  Steve did the same thing for each of his children, growing a beard during the pregnancy and then shaving it off after the babies were born.  No idea why???!!!

At one point, the stinkers took out the toboggan and pretended to be going down a steep hill.  How funny! 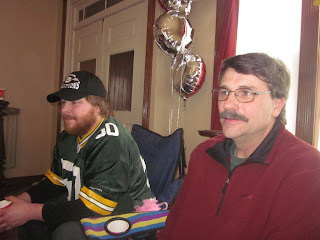 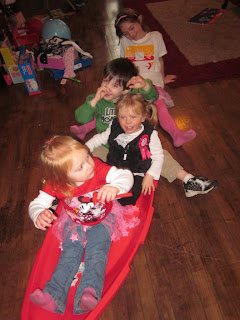 Our other two grandchildren -
Jameson busy with his party favor set of monster trucks,
and Allegra in her ballerina tutu and playing with balloons. 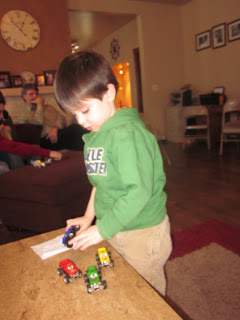 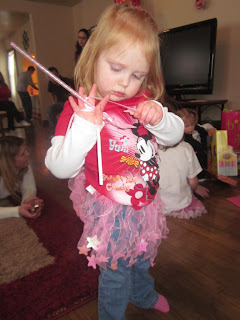 As Chelsea opened each present, she went around to each gifting relative and gave them huge hugs and thanks.  Learning the art of "Thank You" is a good thing to have young ones understand, even at age 2.

Here she is hugging Great Grandma and Great Grandpa Pfundtner, who came all the way from Waupaca for her party. The roads were clear, and no snow in the forecast, we were glad they could make it. 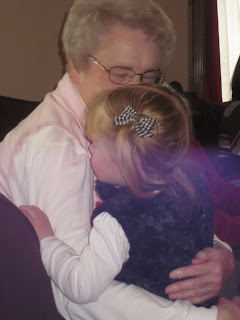 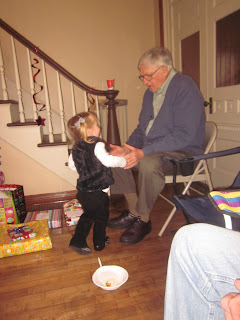 (My camera has been making pink striped glares across the screen sometimes, ever since I dropped it in the Grand Canyon. ACK!   Sunday I treated myself to a new Nikon digital camera, which should help the picture taking from now on.)
Yes, our Little Diva turned 2... going on 20 I am sure.
Happy Birthday, Beedle Bug Baby! 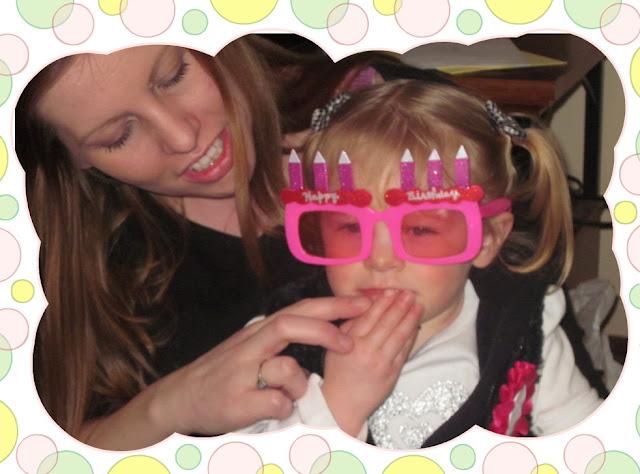 Posted by KarenInTheWoods at 12:20 PM