Sunday was a  partially cloudy but dry road kinda day, so we decided to pack up a picnic lunch and take a ride in the motorhome.  It needs exercise on a monthly basis when sitting over the winter.   Of course there isn't any water on board, so we take along a pitcher of water for the dog dish, and load up a lunch and a camera.

Steve turns the ignition on till the preheating light goes out, then turns it off.  Then again on... wait for the light to go out... then off.  He does this three times before firing up the diesel engine.  The outside temp was 26 degrees and the kitty-CAT engine was purring right along.  We have no snow left in our part of Wisconsin. 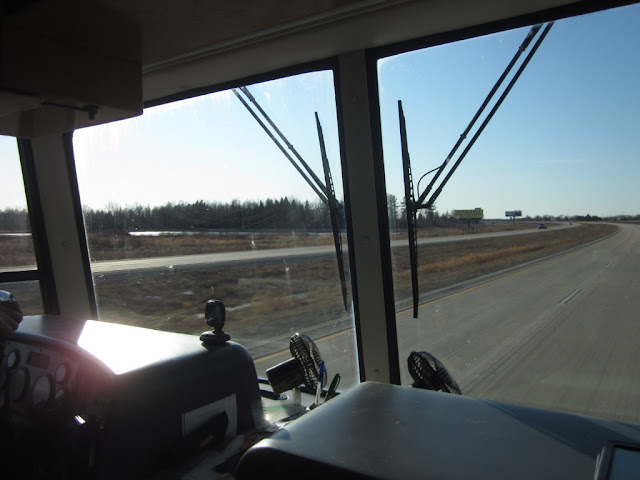 It felt SO good to sit in the passenger seat and watch the terrain go by.  The sun was peeking out so the rig was nice and warm with the dash heat, plus we had the Olympian Wave 8 heater running too.


This time we went north to the little town of Peshtigo.   We parked alongside the frozen river above the dam, and settled in for a little lunch.    We fired up the generator for exercise too, and turned on the little electric Lasko heater to give the generator a load.  It needs monthly exercise too.  The rig warmed up nicely and we were comfortable as we ate our lunch.  The dogs even had along some treats.

We watched a little tv and looked around at a few more projects we might do to the interior in the next few months.  Always something to tweak, build or change, huh?  I had some knitting along, and we kicked back in our recliners for a while.  It was so comfy and cozy inside and I was imagining that we were somewhere else... anywhere else... and not have to think about going back home again. 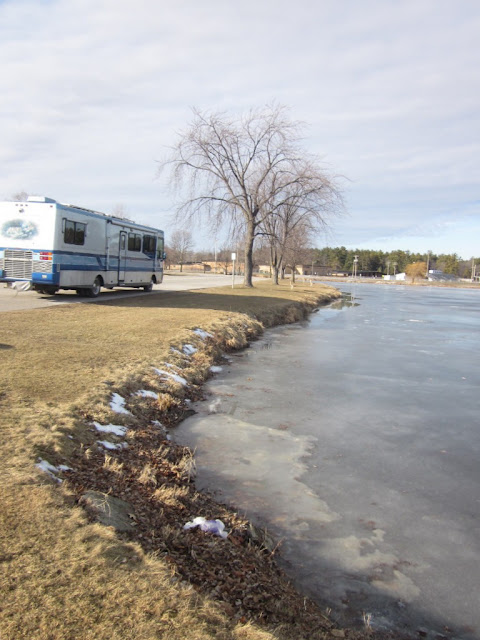 Peshtigo is an interesting, but sad, little town.  In 1871, it was the scene of a horrific fire with a lot more lives lost than the great Chicago fire which happened the same night!   Not many heard about the Peshtigo fire because of Chicago being a bigger city and bigger news.  But the devastation was much worse in Peshtigo with more deaths.  It has the sad record of the most deaths ever from a fire in the United States.
The fires spread for many many miles, even jumping across the bay waters into Door County and catching the top of that finger of Wisconsin that sticks up along the eastern side of the state.   It also spread south 20 miles to where our land and our house is now located.  Only the tallest of the white pines along the river survived on our land in 1871.  Somehow the tiny town of Oconto survived, but any of the homes and farms between Oconto and Peshtigo were wiped out.
http://www.peshtigofire.info/
http://www.rootsweb.ancestry.com/~wioconto/Fire.htm
http://www.peshtigofiremuseum.org/
http://www.damninteresting.com/the-forgotten-fire/
http://en.wikipedia.org/wiki/Peshtigo_Fire
from Wikipedia:
The October 8, 1871 Peshtigo Fire in Peshtigo, Wisconsin, is the conflagration that caused the most deaths by fire in United States history, killing as many as 1,500.[1] Occurring on the same day as the more infamous Great Chicago Fire, the Peshtigo Fire is mostly forgotten.
Amazing to think that people were flinging themselves into the river next to where we were parked, trying to save themselves as the fires raged.  For the ones who survived, many had the tops of their heads burned as they submerged themselves over and over and trying to float downstream away from the flames.  So sad to think about, but a horrible part of the local history. 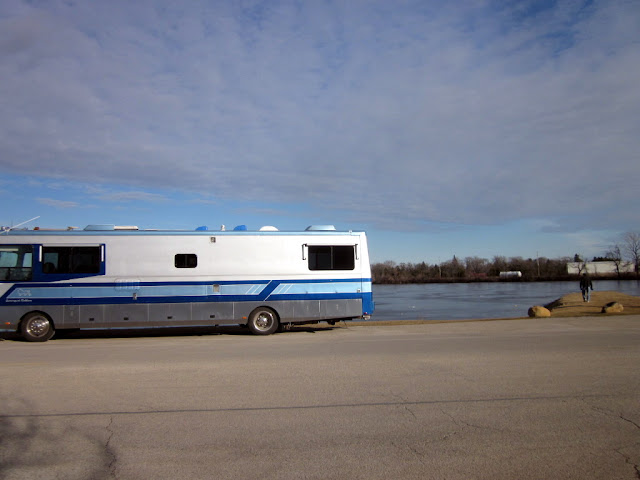 After our lunch, we took the doggers out for a little walk.  It was a tad bit windy, so we didn't stay out too long.  The dogs liked sniffing around and liked to see what they could see.   This was a little man-made spit of land alongside the boat landing area, so people can walk out further to fish with poles, or to reach and load up to fishing boats in the river. 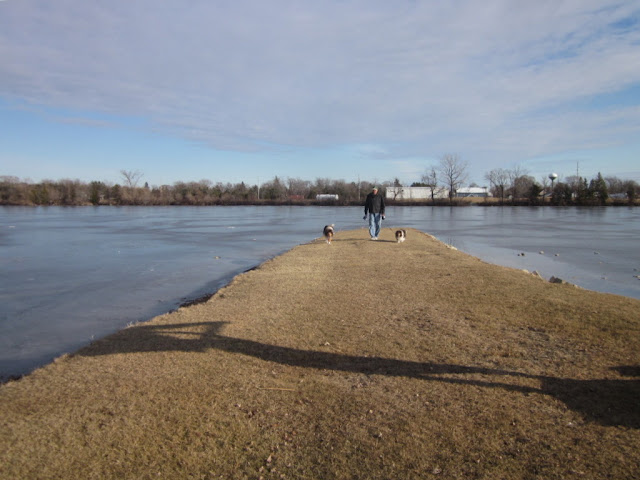 The ice was slushy with melting water over the surface.  Just last week there had been ice fisherman all over this area when it was colder, and you could still see the holes they drilled for fishing.    On the local news, they are warning everyone that NONE of the ice is safe in our area, and to STAY OFF.... 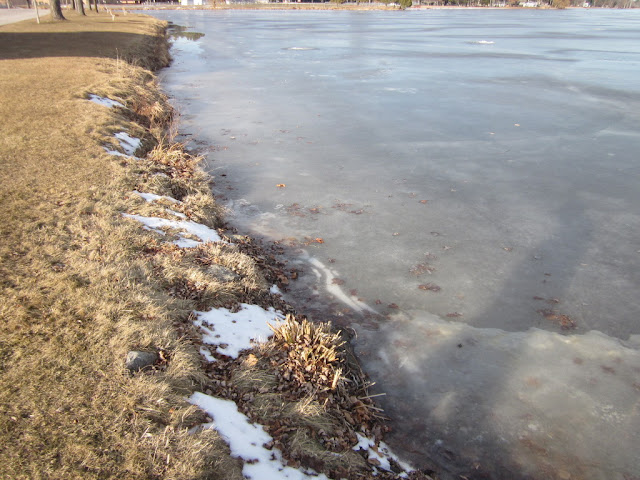 Of course, a few stupid die-hards are needing rescue here and there, seen on the news every night.  They put everyone else's lives in danger trying to save them.  If they stayed OFF the ice there wouldn't be a problem.  At least wait till we have colder weather?  It's been so strangely warm in Wisconsin. By now we usually have a foot or two of snow on the ground.  Oh well, the winter will seem to pass faster now for me, and won't have the Winter Doldrums as long? 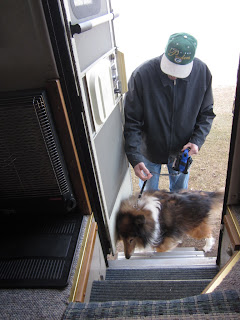 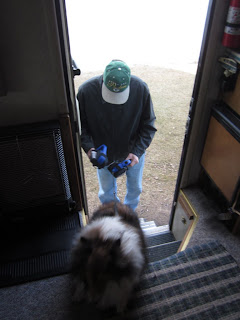 Steve turned the key and started up the rig.  We turned off the propane heater.  We drove over to the Citgo to top off our diesel tank, it was only $3.69 a gallon for diesel, the cheapest we have seen for a while.  It only took about 25 gallons, which topped off the 100 gallon tank nicely. (Ouch! It was still $100!)   Best to store with a full tank for condensation prevention, plus we run an anti-gel additive for the winter months.  We don't rely on the additives supposedly put in by the fuel companies to have enough anti-gel in their mix.
We pointed the rig back towards our house.  Steve had to REALLY wrestle with the steering wheel when it came time to turn left to home or turn right to keep going south.  How much we would have loved to keep on going south... maybe east to Florida or west to the desert... or even south just to Texas?
Instead, we sadly backed it into the driveway and carried our lunch remains back into the house.
Duke didn't want to come in, and sat out in the driveway pouting, as usual.
I know how he feels.
Posted by KarenInTheWoods at 10:52 AM