He has had it in his brain to do some more modifications to the motorhome.  He loves to think about stuff to do to it, thus making it more comfortable for when we retire and live in our motorhome full time.

The newest thing to noodle around in his brain was to get rid of the couch and add two recliner chairs.  I said no, we can't afford that right now as heating season is upon us.  Our house is pretty efficient to heat, but the propane bills are not part of our spring, summer and fall household budget.  Gotta think about filling that big ole propane tank soon.

When we bought our rig in 2006, it had TWO couches....  It made wonderful seating for when the family came along.  Sadly, the couches are very uncomfortable, but they both jacknife open into two twin/full sized beds.   We liked having the extra bed space for the family if they got rained out of their tents when camping with us.  With grandkids coming along now, it's nice to have a bed for them inside.  Let their parents sleep in the tents.. heh heh.

But... the couches were very worn looking and saggy and faded ugly peachy pink and frosty blue tiger stripes.  I am NOT kidding!  See? 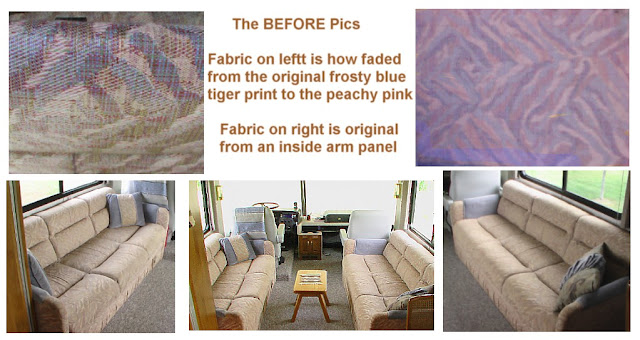 I guess the designers chose Tiger Stripes for a Safari Serengeti?

At that time, I bought a big bolt of nice blue upholstery fabric in a corduroy with faint imprints of leaves....  and I re-covered those couches!  Hauled out my Grandma's old Singer sewing machine and went to work.  Whew, it was a job and Steveio helped me with it.  We didn't change the cushioning, just covered over the existing fabric. 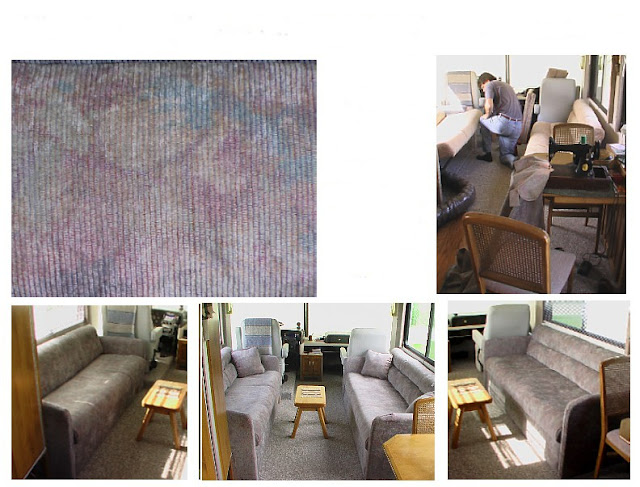 It sure made a huge difference,
and although they were still uncomfortable, they were all we had.
Steve got it in his brain a couple years ago to take out ONE couch.  So we did. We drove to GoodWill and had them haul it right out the door as a donation.  Then we drove across the street to Shopko where they had a Euro Chair and Ottoman on sale.   For $90 Steve was happy, but I still had an uncomfortable couch.  But hey, it was working, so I didn't complain.
Here is the link to that blog post
(note: see those crinkly fabric windshield curtains? More about that later) 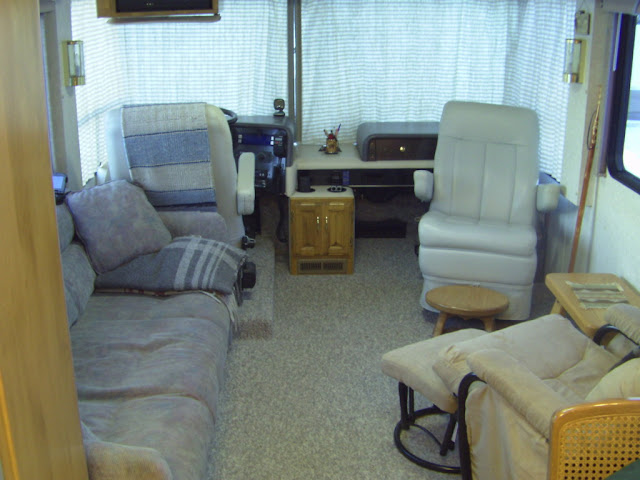 Since then, we bought a nice heavy queen air mattress for when the kids slept over.  We just shove the Euro Chair up front between the pilot and copilot seats.... and that queen mattress sets nicely on the floor between the couch and the wall.  It was VERY comfortable and the kids opt to use that instead of the folded out couch/bed if they stay over.  And now with the couch gone, my passenger seat can rotate around to face the livingroom area to be used for more seating.  (the driver's chair will not turn with the other couch there)
Zoom ahead to this year.
Now, as I said at the beginning of the blog, Steveio got it in his brain to take out the OTHER couch and the Euro Chair ---  and purchase two recliners instead.   This would leave us a lot more room for things like my table loom, or sock machine, or spinning wheel...  which could be left set up when in use and not stowed away each time.  (that was his reasoning and "bribe" to me)
We stopped at one store that had some nice recliners, but the price was out of line.  Then we saw some fancy leather recliners, again wayyy too expensive for our budget.  $900 each!  ouch!    After a few more stops, we went out for lunch.  Then we stopped at ONE MORE STORE.... you know how that goes?
Well, we found some very comfortable Simmons recliners,  on sale of a sale of a sale and top it off, a $40 rebate on each chair too.   Soooo at $129 each, we bit the bullet and he got his danged chairs.

PLUS>>> THEY ARE MADE IN AMERICA~!!
The backs of the chairs slide up and off, like the Lazy-Boy chairs do, for ease of getting in the motorhome door. So they are shipped in two pieces, ready to load up into a vehicle.  But, our little Saturn car was about an inch too short at the door way of the back seat to get in some of the parts, even if we could fit one whole section in the trunk.  We would still be making 2 trips, 40 miles one way, that is 160 miles total to get those chairs!~
Lucky for us, our son Dan has a pickup truck!   And he lives near that store.  We made a quick call, drove over to his house, swapped vehicles and went back to the store for our chairs.  It was pouring rain, but Dan has a nice covered tarp device over his truck bed.  We loaded up the two chairs and headed up to Oconto.
Once we got to our house, we had to remove the couch from the motorhome first.  It's fairly easy with extending it out flat, setting it up on end, removing the arms, and walking it out the doorway sideways like a mattress, with one of us on each end. 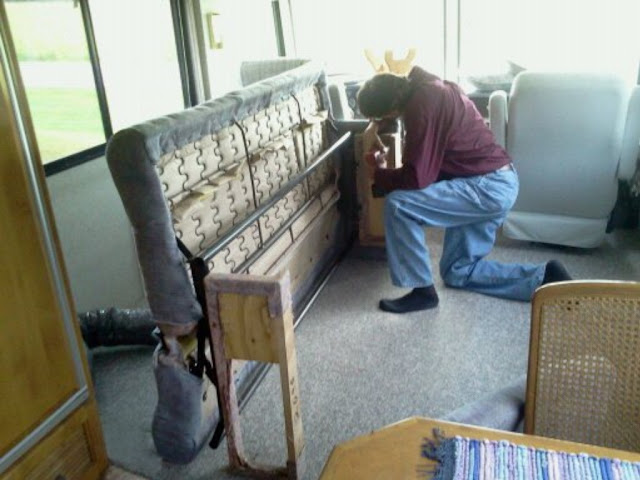 By removing the last couch, we are not losing much storage space, because we only stored a couple sleeping bags and a folding chair under the couch.  There was a snakey air duct from the furnace that also ran under the couch too.   Easy peasy to detach it and we will just put a nice 20x10 household vent cover over that space left on the wall. 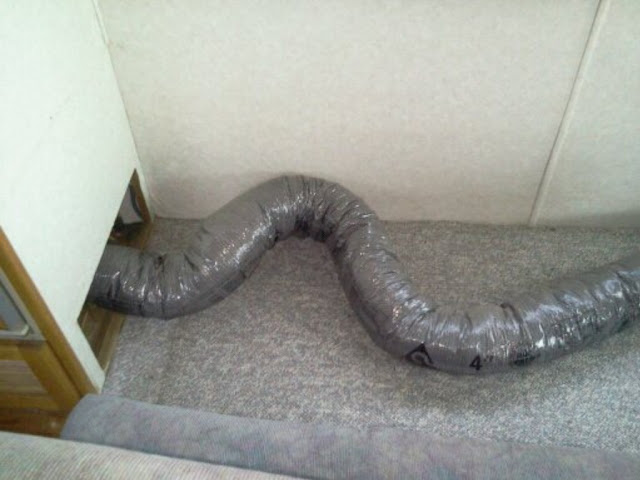 We never use that built-in RV propane furnace; it's a big energy waster, uses up a lot of the battery power to run the fan, and doesn't heat very well to the back of the rig either.  That is the unit that comes in most RV's.  We use an Olympian Wave 8 catalytic heater instead that doesn't wear down our batteries overnight, and heats our rig up nicely.

We will leave the ductwork in place if we do want to use the big furnace, but we shortened up the duct so it's behind the grid we are putting up.  That furnace does heat our basement compartments if in a freezing situation, we would have to kick it on from time to time to keep the tanks from freezing.  But we would rather be spending time in warmer climates than fight with freezing tanks, right?


Here is the living area now without any furniture in it!  Embarrassed to say I guess I gotta steamclean that carpet, eh? We take our shoes off all the time, but the dogs go in and out, tracking in dirt and leaves.  On the next nice day, I will haul out the steamcleaner and tackle that job. 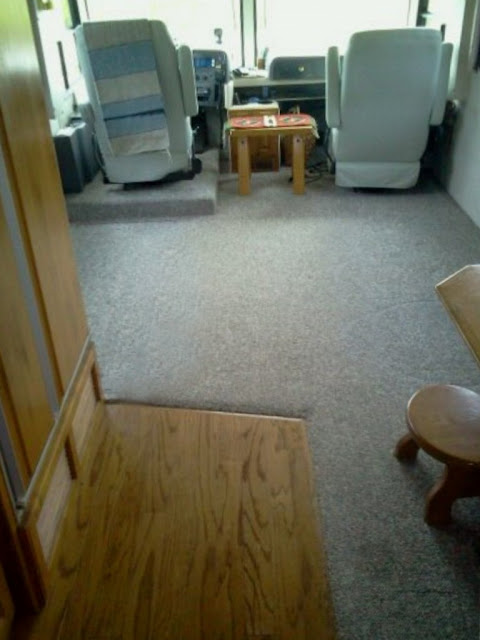 The pic below is my playing with the panoramic feature on my Galaxy Tablet... heh heh...  ain't that how they do it in those fancy motorhome brochures to make them appear even more roomier and wider?

We carried in the chairs and set them up,
right before the start of the big Packers vs Bears football game.
They can be put both on the driver's side... or both on the passenger's side.... 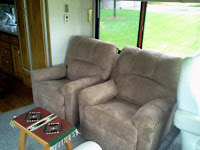 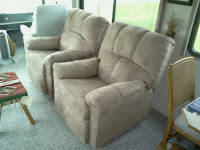 I think I liked them both on the driver's side the best.
Or they can be put one on each side if we wish.  Kinda nice to have flexibility----
and they can be mounted down right through the floor once we decide where we want them.
It was raining outside, so we decided to sit right down in our chairs and watch the game!
Steve brought out a cute little table he had built a while back for in the house.
It will now be an extra side table in our rig. 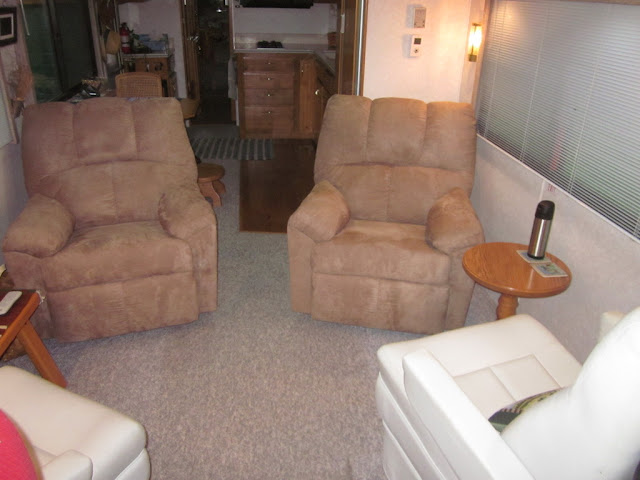 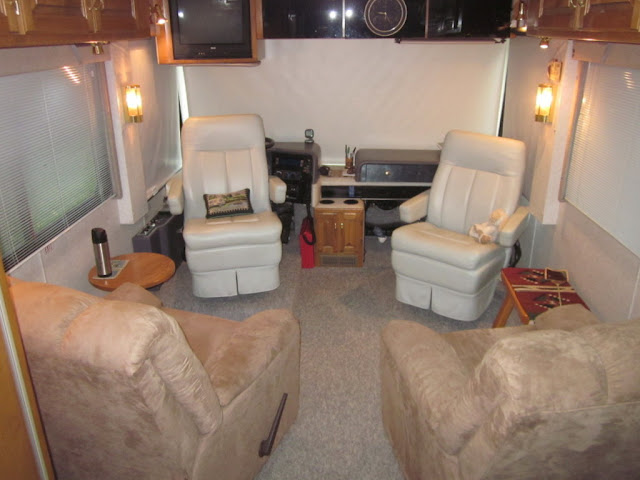 We enjoyed trying out the comfortable chairs, watching the Packers trounce on Da Bears, and watching the rain pour down outside.   When the game was done, the rain was done too!
We loaded up the old couch into the back of the pickup truck and hauled that down to Dan's too.  He wants it for extra seating down in the basement bar/rec room of their house.
I wonder what Steveio is going to change next?????
Posted by KarenInTheWoods at 11:09 AM