PEE NEW MOAN YA and Pressure Cooker Rice in 8 minutes -

Dang... still struggling with this flu/cold/whatever ...  been going on now for two weeks and it just don't LEAVE!   First it was like a flu, then it went into lungs and congestion, now it's in the head and sinuses.

Okay, enough complaining.   So I called the doc and went in, sure nuff, I gots PEE NEW MOAN YA ....arggghhh.   I happen to catch almost anything bronchial since I damaged my lungs in a chemical spill in 2002.  I end up with pneumonia about once a year, sometimes twice.   So home again home again jiggety jigg with a shot, some strong antibiotics and some codeine cough syrup.  I am sure within 24-48 hours I will be feeling a lot better.
Gotta get myself whipped into shape, Erin and Mark are leaving tomorrow night for 8 days to Cancun, so we will have the beedle bug Chelsea granddaughter here 24/7 till they come home.  Not to mention, the two rat dog chihuahuas too!
Anyhowwwww  === Last week I whipped up some rice in the pressure cooker and decided to take some pics of how I do it and the chicken stir fry I had to go along with it.   So I will fill up the rest of the blog with that.
First I put the bottom rack thingie in the pressure cooker, along with an inch of water. 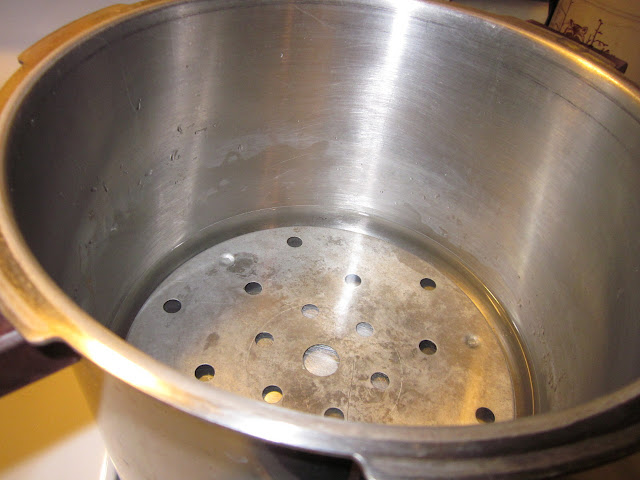 Then I set a small metal bowl in the center of the pot, and measure in one cup of white rice 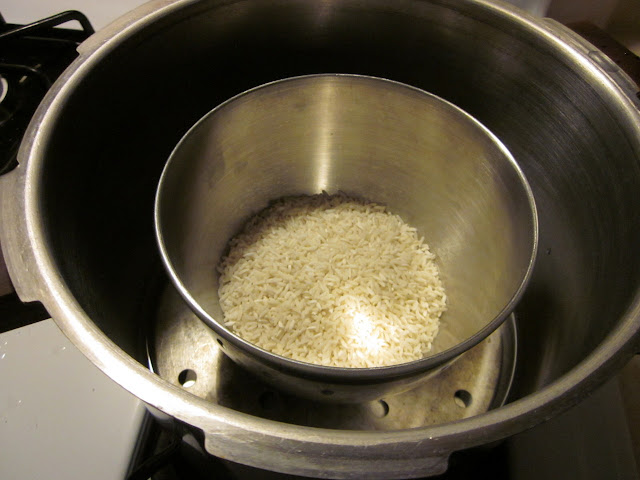 Then I pour in 2 cups of water into the rice 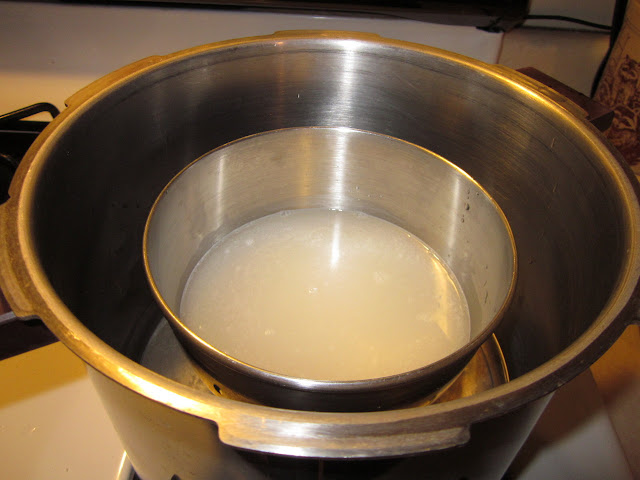 Put the lid and the rocker on top, turn on the burner and heat it up.
Once the rocker starts rocking, let it simmer for 8 minutes.... 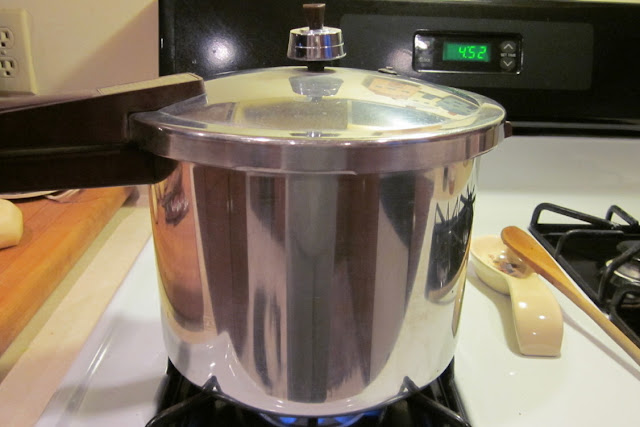 In the meantime, in another frypan I am putting in a dollop of extra virgin olive oil, some garlic, some parsley and some Lawrey's seasonings.  I start heating this up while the rice is starting 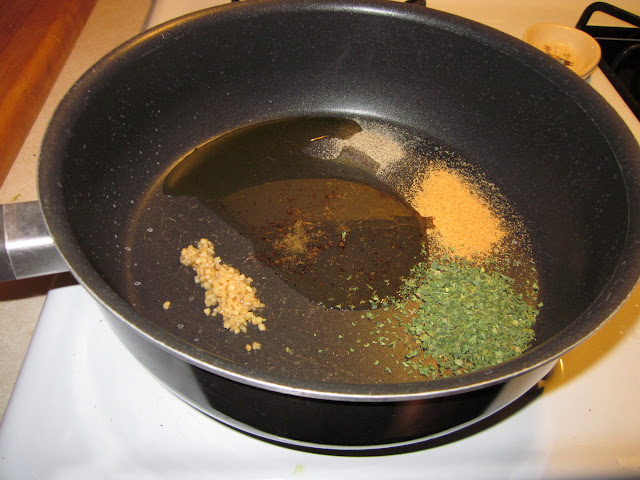 Now I chop up onions, and boneless skinless chicken breasts into thin slices.
If the breasts are still partially frozen, they cut easier.  I add a couple tablespoons of water too. 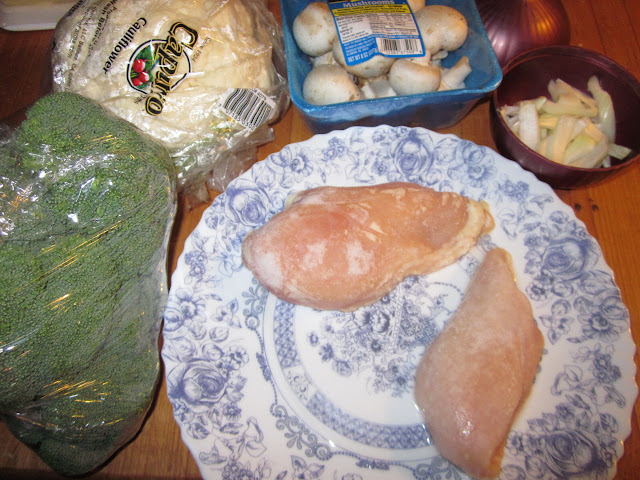 I stir fry the meat and onions and garlic, and keep stirring it and flipping it around.
Once that is almost fully cooked through,
now I add fresh mushrooms, and chunks of broccoli and cauliflower.  (sometimes a little more water) 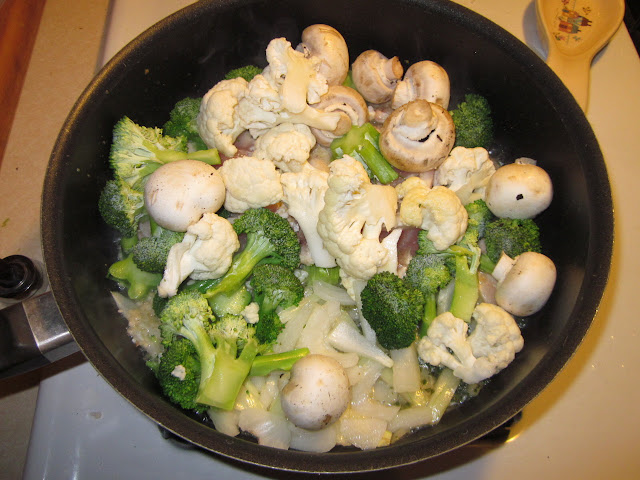 and toss the lid on the pan to steam them through. 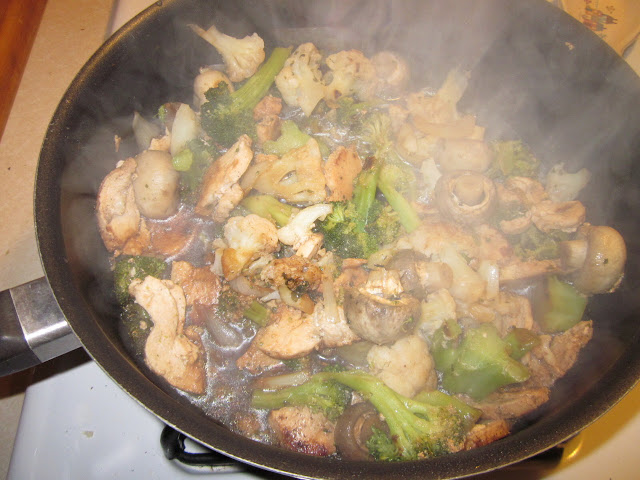 About now the rice is done, so I turn off the burner and carry the pressure cooker over to the sink.
I run it under cold water to release the pressure, 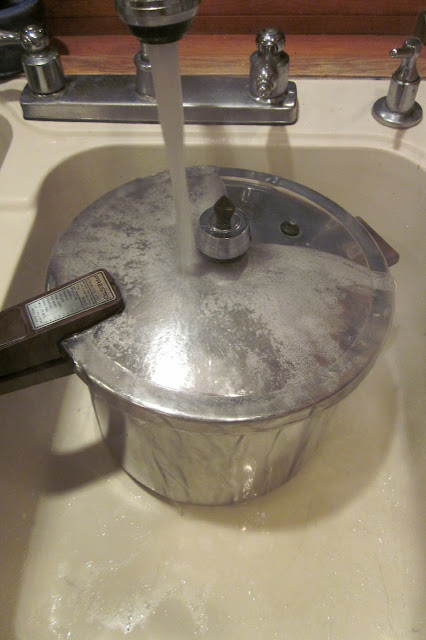 and the rice is done to perfection! 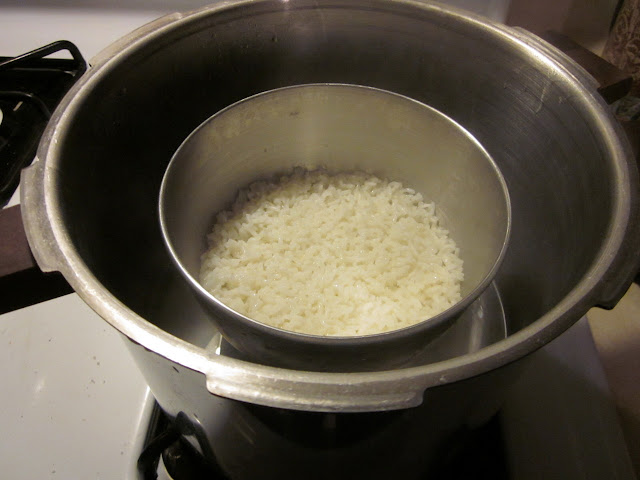 One cup of  raw rice makes 2 cups of cooked rice, just enough for Steve and I.
We scoop up rice into a bowl, and dump a ladle of the chicken and veggies on top YUUMMMMM
And this is a good quick meal to make when in the motorhome too,
in case of a rainy icky day when we can't cook outside.
Now I am gonna get in my flannel jammies, curl up in bed with that good book "A Cowman's Wife"  that I mentioned yesterday... and gonna take it easy and let these antibiotics take hold!
Got too much to do to be sick, ya know?
Posted by KarenInTheWoods at 6:39 PM