One Month Vacation Countdown - and cooking stew in a pressure cooker

Yes... one month ... one month!   The countdown has begun!  As I look out our windows at the dreary snow, and feel the subzero temps blasting us, we know how much we will appreciate hopping in the rig and heading south and west to where it's WARM!  I think we just want to open up our lawn chairs in the desert, sit in the sunshine, turn our faces to the sun and relax!!!

Yesterday we drove to frozen Green Bay for some errands, and bought some New Balance hiking/walking shoes for our trip.  We plan to get in a lot of walking and the dogs will be enjoying it too.  We found some nice ones on sale from $70 down to $21 clearance!   They didn't have them in woman's size on the clearance, just men's.  But Steve found a pair for himself, and I thought what the heck, let me see if there was a men's pair that were small enough for me?  Sure Nuff!  So now we are sporting matching shoes!

We skipped going to the big Green Bay RV and Camper show this weekend.  It was held indoors and they charge $8 a person to enter the building. We know of the two local dealers, only one carries motorhomes, and he only had 2 on the lot all winter. Our friends Sharon and Fred went, and said there wasn't much to see anyhow.  Just lots of booths of private parks that we never go to anyhow. So we saved our money.

Last week I posted about using my pressure cookers in the house and in the motorhome.  I have a larger one in the house and a smaller one in the motorhome.   Note-- this is not the big canning pressure cookers with the dials and levers.   This is a smaller stove top version for cooking foods faster and seals in the flavor better than conventional cooking in a kettle.

The one in the pics below came from a tenant of mine. He was an older man who was moving to Nevada, and I helped him sell off a lot of his antique furniture and things before he left.  One of the items he gave to me was this pressure cooker, complete with the old original recipe book that was printed by the company, Presto.  I know new ones in the stores run upwards of $70-80 ... so keep an eye out at thrift shops or rummages for a more reasonable priced one.  You can get replacement gaskets and rocker weights in many hardware stores or online.   The smaller one in the rig came from a rummage sale for $2.

We use them a lot, and it makes cooking easier and faster, in my opinion.  So while I was making beef stew this week, I snapped a few pics for my blog.   I timed myself ... it took 28 minutes from beginning to end!


First, I browned up some tenderloin chunks of meat
in the bottom of the pan with a bit of water and spices. 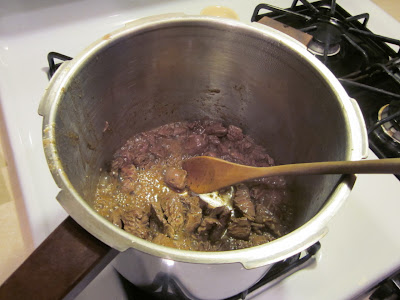 While that was browning, Steveio peeled the taters and carrots.
I gathered garlic, mushrooms (I was outta fresh so used canned)
and 2 packets of gravy mix. You could use jars of gravy too.
That purple thing is a plastic onion holder that I just LOVE..
keeps half cut up onions in the fridge without them stinking up the other foods. 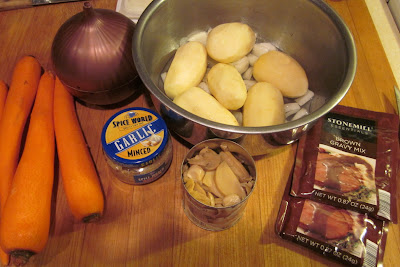 Once the meat was browned, I tossed in the carrots,
onions and shrooms and about 2 cups of water 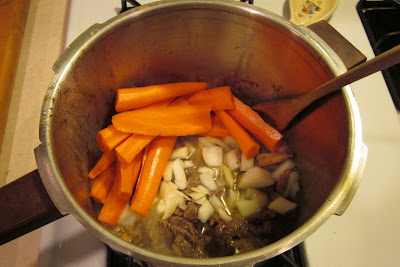 Stick on the lid, turn the burner on Med-Hi and set the rocker weight in place
12 minutes of psssh psssh psssh rocking on top. 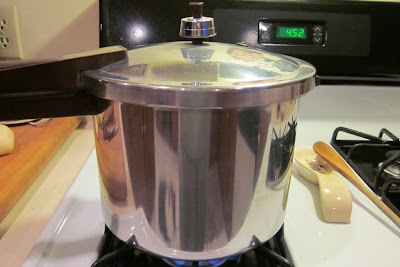 While that was cooking, I chunked up the potatoes
and mixed up the gravy mixes with 2 cups of cold water
(see that small wire whisk?  World's Best Invention as far as I am concerned)
gathered the spices and a dollop of steak sauce too..... 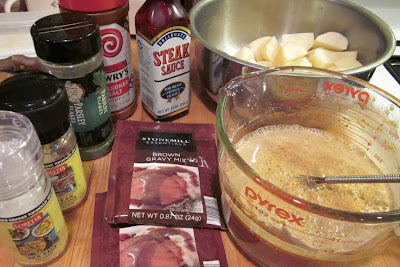 When the 12 minutes were up, I set the pressure cooker under cold running water in the sink....
the pressure lets out and then I can open the lid 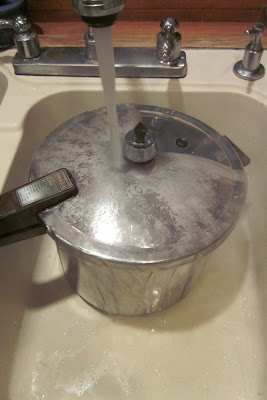 I dumped in the gravy, the spices and the potatoes, and the dollop of steak sauce.
Stir it up and I set it to cooking for 8 more minutes.
(if you add the potatoes at the beginning, they get too soft and mushy) 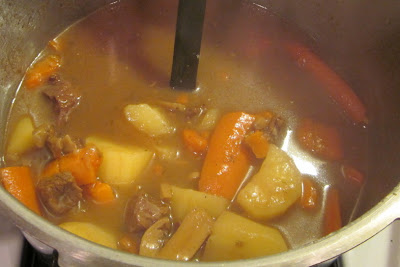 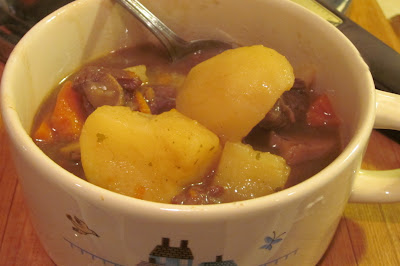 The house smells soooooooooooooo good after making stew!   And sometimes I add to that a loaf of home baked bread from the bread machine.  Now that is a double whammy on making the house smell extra special!


Last night I made up rice in the pressure cooker, (7 minutes to fluffy perfection) and took pics but they are still in the camera... will save them for a future blog post when I have nothing else to write about.
Posted by KarenInTheWoods at 7:47 AM