I Am Not A Fan Of Ceiling Fans

I am not a fan of ceiling fans.

I never have been. They don't appeal to me in the least. The very worst is laying in the bedroom looking straight up at a ceiling fan rotating over the bed. It makes me nauseous. Even a ceiling fan out of the corner of my eye, in my peripheral vision, can make my stomach upset.

The only reason I agreed to a ceiling fan in my She Shed is because it's mostly positioned up over my shoulder, out of my line of sight. With the 14 ft tall ceiling, we need to push the hot air down and need circulation in the room. I know that. When we created the She Shed we added this 56-in industrial ceiling fan. It works quite well and has a rheostat type wall switch that you can run it on any speed. On the highest speed it is zooming like an airplane ready to take off! We usually kept it down as low as possible just to move the air around. But, it only goes in one direction and it pushes the air straight down on us. The outer walls still feel cold, and the corners are really chilly. Not bad in the summer, but in the winter months I just don't like the feeling of the air pushing down. Also, the industrial ceiling fan does not have a light on it.

Steve suggested we put a household type ceiling fan up there with a remote control. Then we can reverse the direction, control the speed, and have the light on dimmer to create whatever level we want of illumination. So he hopped up on his ladder and disabled the one that was up there. We will list that on Marketplace and sell it because it's a perfectly good fan. It just doesn't have all of the features that we wanted like the household one does.

It has only 3 blades and was unobtrusive up there, kinda out of sight, outta mind for me. 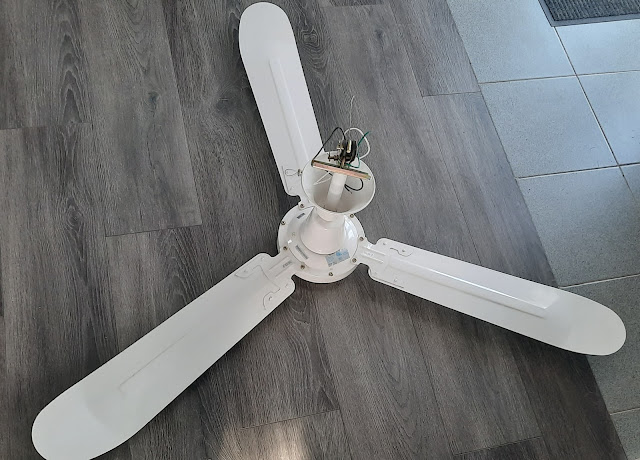 We ran up to the big box home improvement store Menards in Marinette. There they had this 52-in fan, which is a little smaller. But it did have the reversibility and also the light kit with the dimmer and the remote control.

Hop skip jump like a bunny, here's my Steveio assembling the new fan and putting it up. I read the directions and handed him the parts, while he took care of the wiring and the mounting brackets.  He just loves fiddling with stuff and getting it set right.

Soon he had it all together and tested, turned the power back on, and it works just fine. Now we can control the amount of circulation in the room much easier with the touch of a remote.  It will push the warm air down along the walls and take care of excess condensation on the tall french doors and windows too.  We noticed a drastic improvement in just an hour of use.  The room feels more "even temp" with the better circulation. 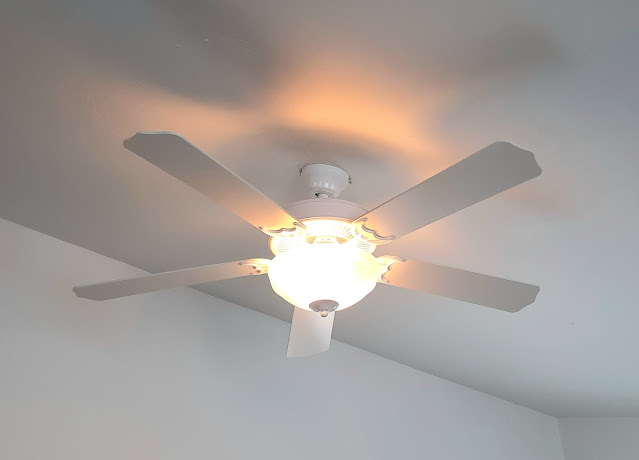 I do want to add this stained glass lamp shade to the bottom of the fixture to match the other stained glass lights in the She Shed and the rest of the house. The only problem is the threaded rod that came with the kit is only long enough for the white shade that was included. Steve put the white one up for now, but as soon as we get back to a hardware store he can get the longer threaded rod. 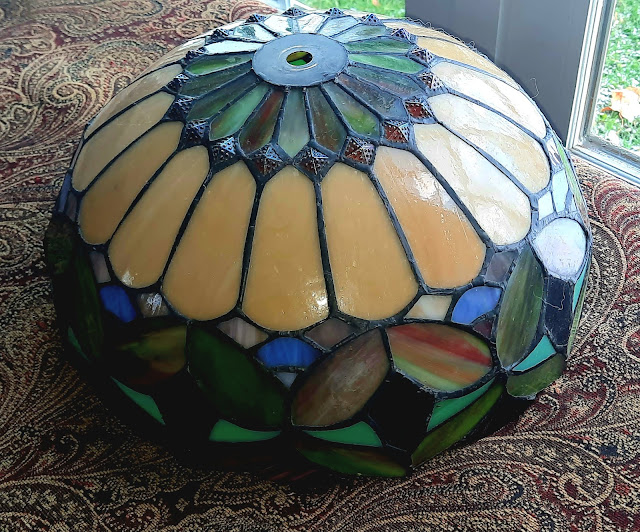 We had added stained glass shades like this to the ceiling fans in the house in Chilton and it makes them at least tolerable in appearance to me. Even though I still don't like the blades moving if I can help it.  Now I can walk in the room and hit the button on the remote to turn it off when Steve isn't looking.  LOL
~~~~~~~~~~
While we were at Menards, we took the time to pick up an extra gallon of paint to work on the newest antique door that he found on Marketplace. It's written about in the blog prior to this.  He is sanding it first, and then I will paint it before installing it on the laundry room/ half bath doorway.
At the same time we had another thought in mind. Since we bought this house three and a half years ago we really hadn't painted any of the rooms (other than a couple crazy deep mauve accent walls), and we did paint the bedroom when we redid the ceiling.
The rest of the walls in the entire house are almost a pinkish beige hue called Bermuda Sand. We are considering maybe lightning brightening and changing the tone so we grabbed a bunch of paint chips to decide what we're going to do. Since all of the trim and doors are painted in the String of Pearls color we need to find something that coordinates without looking too pinky. So here were some of our choices:

We will think about that a bit and make a decision later. But we can paint room by room, wall by wall, and take our time. I do enjoy painting and it can be a winter time project. Just doing a little bit at a time.
On our run up to Marinette and back was an absolutely beautiful day with vivid blue sky. It has stayed cold enough here that the snow is still clinging to the branches of the trees everywhere.

The wind chills were in the 10 degree range,
but falling lower by the weekend.

I know in the Eastern states they are getting hammered this weekend with four or five feet of snow. Right now we just have an inch or two on the ground and that is fine. It brightens everything up and looks so clean, Much better than the dull browns and greys after the autumn leaves came off the trees. 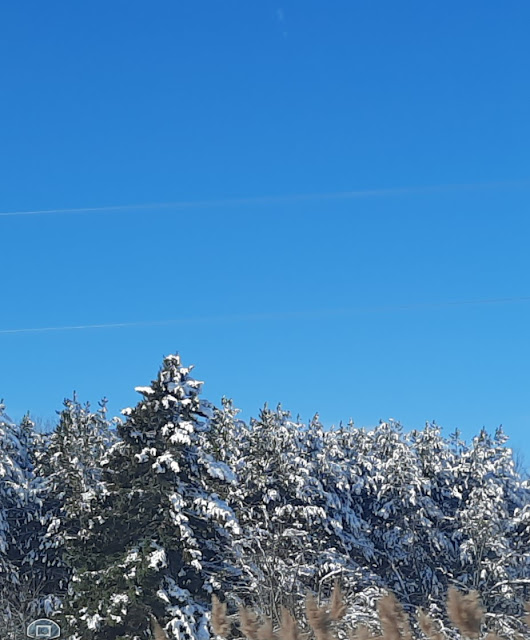 We are staying in this weekend and not doing much of anything. I may start on this next quilt project which is for my friend Vicky. It's in memory of her mom, it's a quilt kit that her mom had bought and never got around to working on. It will be a wall hanging.  I will do the cutting, piecing and quilting while she will do the stitching around the appliqued birds and the little branches they are sitting on.
When we work on it, Vicky has decided she would like all four birds going in the same direction. On this sample photo from the kit, it looks like they are crooked not placed properly. I hope our version will look better than this! 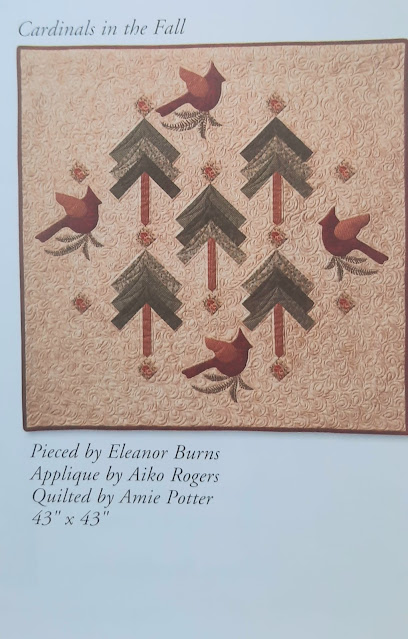 So that's it for a comfy Snuggly Saturday morning. I am fighting off a little bit of sinus and a sore throat. Not enough to be really sick, but enough to not want to go anywhere either. Good excuse to stay home and play with my She-Shed stuff.
Posted by KarenInTheWoods at 10:06 AM