Day 64 at home. It seems that our numbers are really slowing down in Wisconsin, they said on the local news that there were only six new cases today. Our County itself has only gone up by one case in the last two weeks, most of the other existing cases have resolved and gone home from the hospitals, at least in our County. Let's hope this is the trend of moving downward, so we can start getting back to normal.

Many prayers and good wishes for all the scientists trying to develop vaccines and antibodies so that we can get this thing under control before another wave could hit.


~~~~~~~~
Our Wisconsin weather has been really crazy. It's been so cold and damp and chilly. We've been down to freezing the last couple nights. We even had ice in the birdbath this morning!  We've had to haul all of our flowers inside to keep them from freezing, We can't even store them in the garage, so the last three nights they have been in the She Shed.  The weatherman is promising some warmer weather, but rain. Oh well, better than *S*N*O*W*, right?

We are working on a couple more projects. Steve was raking out the newly spread dirt in the backyard, and the little bit up in the front yard. He is using a wide landscape rake we borrowed from his brother. 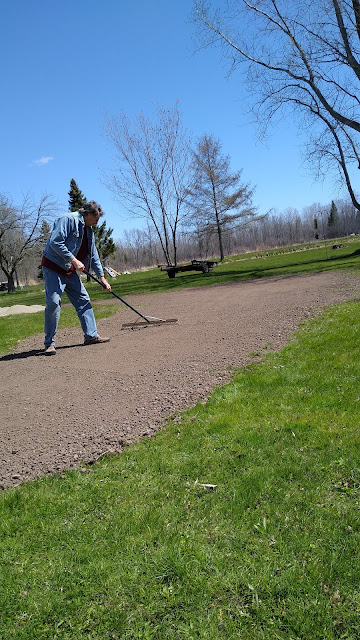 Today, once he got it all smooth, he raked in 10 lb worth of grass seed! He wanted to get it in before the forecasted rain. They said it's supposed to start tonight between 7 and 9 p.m. and rain most of tomorrow. Looks like we're due for about a third of an inch. I hope it's a nice gentle soaking in rain that will not rinse away the grass seed. 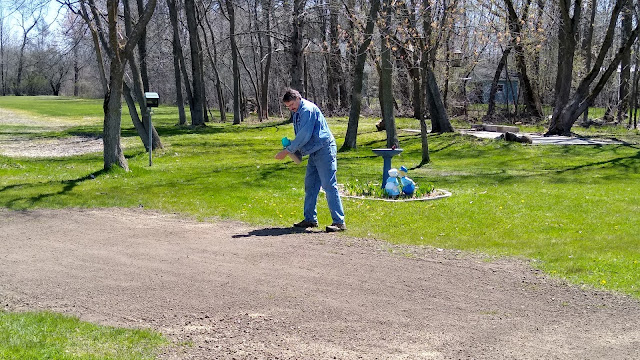 He didn't want to put the grass seed in too early because we have so many birds in the backyard. He didn't want them to think it was a marvelous feast that we were putting out for them to binge upon!

As it is, we have multiple bird feeders in the backyard. I decided to move two of them over to better viewing locations, so we can see them while sitting in our chairs in the she shed.

Steve was busy down in the basement working on the basement windows, (more on that later), so I decided to take a little pipe and start pounding in a new hole. Then I pushed it around and around and around until I made the hole big enough in the soft damp dirt. There are no power, water or gas lines in the back of our home, so it was safe to pound down about two feet. 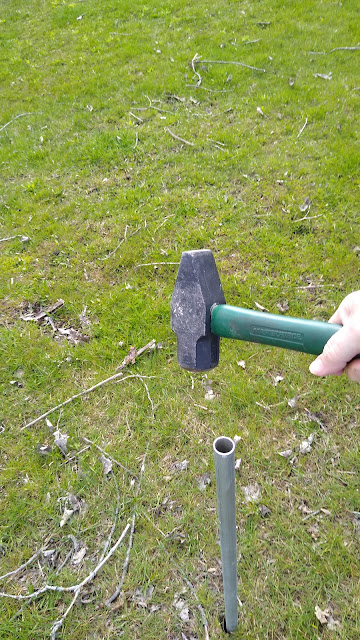 Then I was able to pull up the thick pipe from out of the ground, and move the existing bird feeder over to its new location. Bang bang bang bang I pounded with this big heavy metal hammer on the support blades to help guide the pipe into the ground. 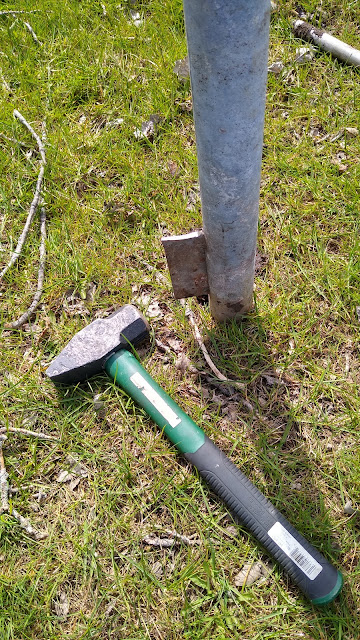 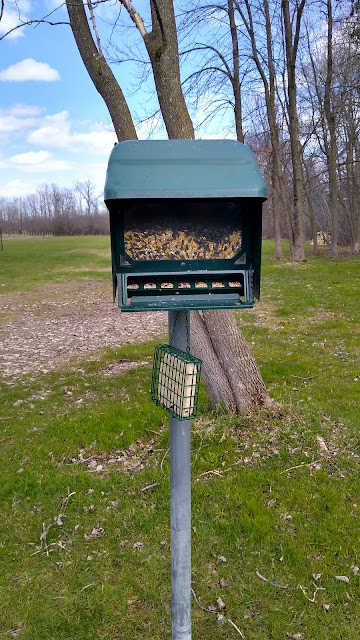 This bird feeder is kinda special. It's been with us at three homes now.  I had gotten it from my dad many years ago and it has a really nice design. I can set the amount of tension on the spring perch, so if squirrels or big heavy crows land on the perch, it closes off and they can't get any food. But the smaller lighter birds like the song birds and cardinals and bluejays can fit on it just fine, and it doesn't close off the food.

Steve came up from the basement and wondered who was pounding outside? Here he saw I moved that great big pipe and pounded it down two feet into the ground by myself. He was pretty surprised. Then I told him how I did it with the little pipe first and went using it as leverage to push back the dirt and make the hole bigger. Work smarter - not harder! 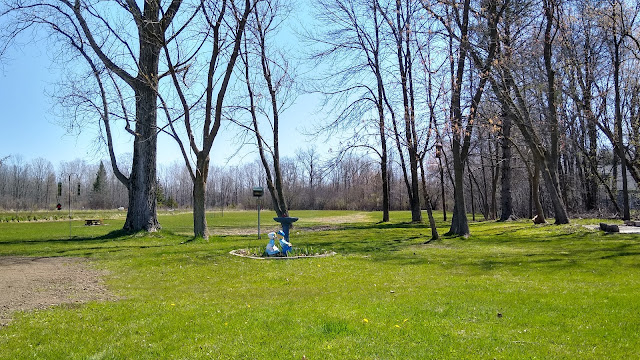 The dogs helped too! 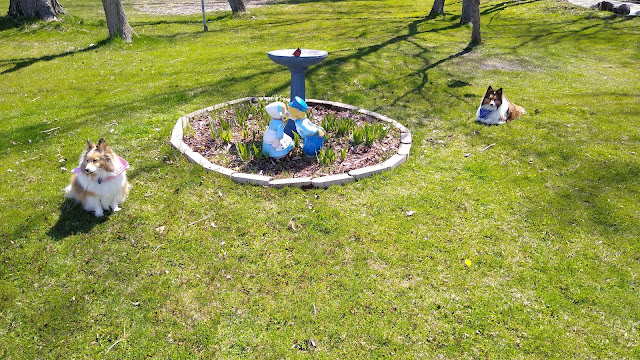 Steve and I are working on the basement windows. He is rebuilding some of them from the sill on up, where the wood has rotted away. Last fall we stuck on some quick square plexiglass storm windows to cover them up for the winter. 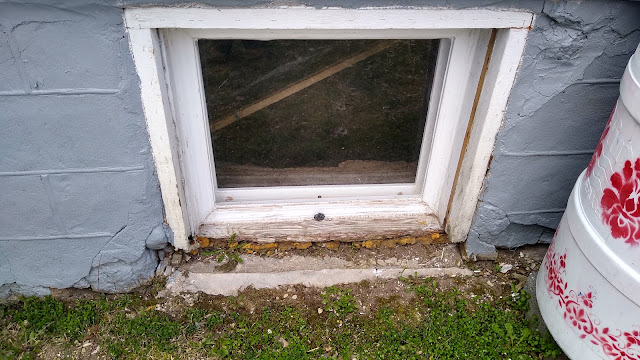 Now we are taking them out completely, and he is repairing the foundation and rebuilding the sill with treated wood.  Then we are repairing the glazing around the loose sections of the window panes, and I am painting them all both sides with two coats of exterior paint. They will all be sealed back in and we will use the solid storm panels from last fall on the inside instead. Then the pretty panes of glass can be aimed to the outside. 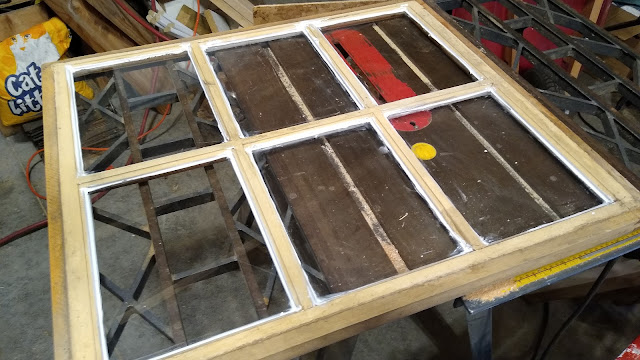 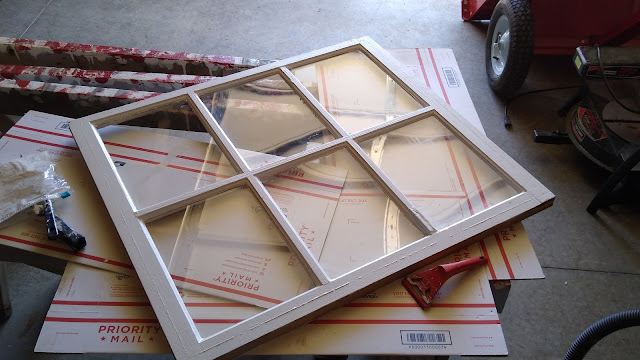 We plan to replace the windows on the main part of the house with the same multiple pane grid style, so these basement ones will be able to match nicely.


We put the rain barrels into place, with the gutters aiming down into them.  We have one for the side yard and one for the back yard.  Soon we will have fresh rainwater to water all of the plants. 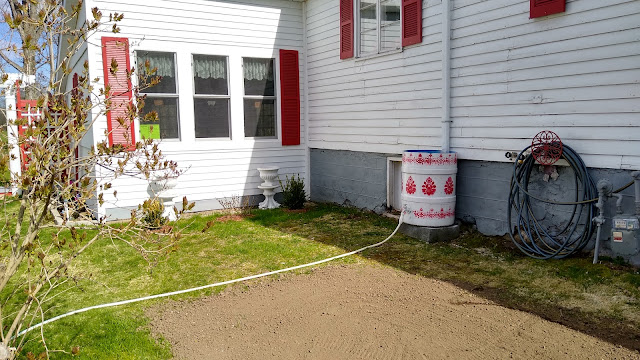 Even though it's too early to plant outside yet, I started getting all of my flower pots and window boxes ready today. Since we have some nice new fresh gravel, I was able to put some in the bottom of all of the containers for drainage before I add the potting soil.

I put little pieces of screen across each of the drainage openings and then gently put the new gravel into the bottom of each of the window boxes and cement urns.

I can't wait for it to warm up enough so I can put out all of my colorful geraniums on the front porch. It will be exciting to start my beautiful clematis and ivy plants growing up on the pergola.  Not to mention starting my tomatoes in the new patch out back.


I guess I got Spring Fever?


For now, we are huddled up inside, when it is cold and damp out there, and we are playing cribbage and yahtzee by the fireplace.

Posted by KarenInTheWoods at 8:57 PM