It's day 60 of our coronavirus self-imposed quarantine. We are having a little bit of contact with lots of social distancing.

The word "serendipity" comes to mind. Even though we could be lacking things, and commiserating, and complaining, instead we will try to look on the bright side of things.

Which is exactly what happened to us on Thursday. Serendipity!

Remember in my last blog I said that we had gravel and topsoil delivered from a local landscaping and excavating company?

Thursday morning, Steve's younger brother was going to bring up his tractor from Menasha and spread it around for us. Unfortunately, those plans didn't work out as something had come up and he would be unable to come, and didn't know when he would be able to make it in the near future either.

The first thing we did was drive out at 8:30 in the morning to the little Mennonite garden center greenhouse called the Garden Spot. We went exactly at their opening time and there were no other customers there. We put on our masks and our gloves and headed into the large airy open greenhouses. We were able to zoom in and pick out four beautiful clematis plants for my Mother's Day present! I wanted two red ones and two white ones to intertwine and work their way up and over the pergola.

Steve said we could splurge. At $15.95 a plant, that's quite the splurge with $64 plus tax!!!  Since there were no other customers there, we also grabbed a dozen beautiful geraniums of the deeper red color, some white ones and spikes, as well as 20 tomato plants. Now we should be all set for spring. That is, if it ever comes???

We are terribly cold in Wisconsin right now as part of the polar vortex. We actually had snowflakes falling yesterday and this morning it was down to 25 degrees. The wind chills were even lower.


Once we got home from the nursery we decided to work a little bit on our front steps. Steve had bought six boards to install as kick plates and I started painting them in the garage. 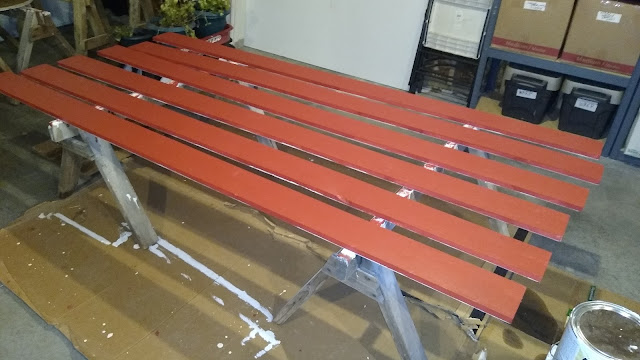 He leveled out the existing steps a little bit, because they were slightly crooked.  I also  cleaned up the flower beds and straightened up the edging bricks. 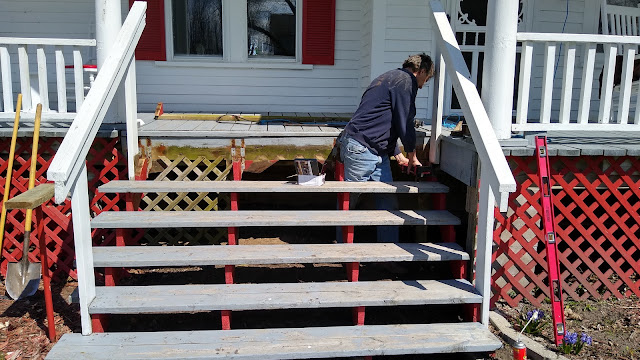 While we were standing out in the front yard admiring our work, we happened to notice a truck pull up across the street in front of our neighbor's house. It was towing a big flat trailer with a skid loader on it. It happened to be from the very same Carlie's Landscaping and Excavating that had previously delivered our gravel and dirt.

We gave the guy a shout and it turns out he is the owner of the company. He was just over to do a little job across the street for the neighbors. Steve asked if he would consider coming over and spreading around our gravel and dirt for us and what would it take? He replied he could have it done in about an hour and would charge us thirty bucks???

If we hadn't been outside by the front steps, we would have never seen him, never talked to him, and never had the opportunity to hire him at such a bargain rate.

He was done in no time over at the neighbors, and he zoomed over and went straight to work. You sure could tell this wasn't his first rodeo! 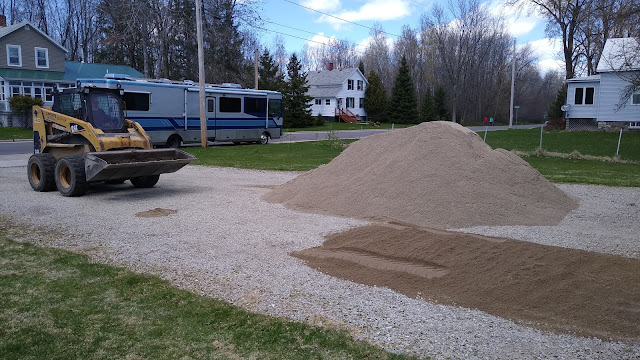 I made a few video clips for the grandkids.

I made the videos for me too, because I find it really neat watching this type of machinery at work.

He even brought a bucketful around to the front to fill in where the old original driveway had been. This was the old driveway that led to the garage door which is now my she shed. I was going to haul the dirt over there, one wheelbarrow full at a time. He just scooped it up, brought it around to the front, and dumped it.  He then slid backwards with his blade, smoothed it out and it was done. 5 seconds, tops. 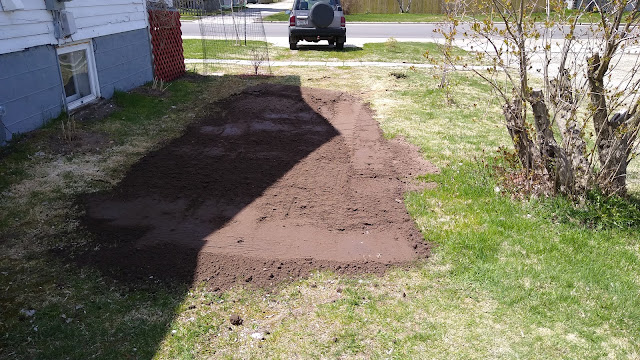 True to his word, he had all of the gravel and the dirt spread around within the hour. He also jaw-jacked for a while with Steve and I. At a safe distance.

It turns out, he is the guy who did all of the original gravel work and prep work for our driveway and garage when it was built by the previous owners two years ago.

He talked about how deep down the foundation rock bed goes for underneath the motor home and also underneath our concrete slab for the garage. It is 3 ft down of layers of huge rock compacted over and over, before the upper layers were made.

His company also hauled the many many loads of fill dirt for the backyard and graded that all off. That's what makes us have such a big beautiful backyard instead of a swamp.

We handed him an envelope, not with $30 cash, but with $60 cash because he did such a fantastic job.

He loaded up and went on his way, off to do 16 other stops that day he said. Lol.


Steve then took our Tracker and drove it back and forth and back and forth to smooth it out --- even though it was kind of packed down already from the skid loader. 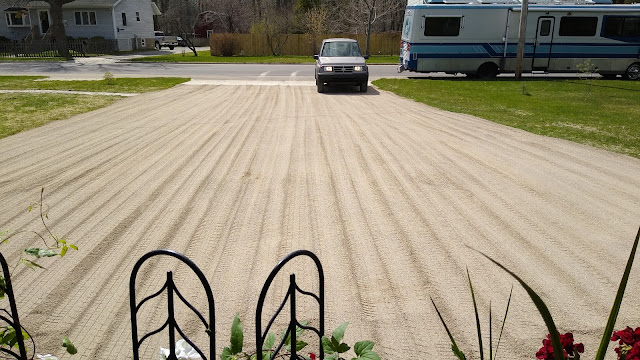 Next project up was for me to make a crock pot of calico beans, and a bowl of my favorite potato salad.

Serendipitously, Steve's older brother and his wife were on their way with a trailer full of 16 ft long pieces of siding. It is the same fibered cement smart siding that we are using on the home. He had 76 extra pieces left over from another project and was hauling it over to us, he said mainly to get it out of his garage.

They would be arriving around dinner time, so we decided to socially distance ourselves and grill outdoors. I set up the food on the picnic table in the backyard. Steve grilled out burgers and brats. It was pretty windy and cold coming down from the Northeast, so we changed that plan a little bit and ate on the front porch instead. 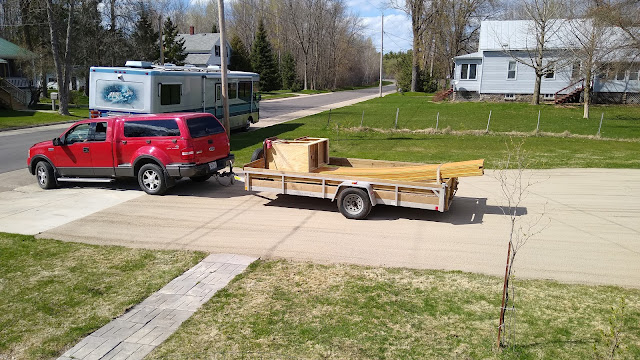 The guys unloaded the siding into our garage in no time flat, and we have a nice little visit. Then they had to head on out to deliver a cabinet to their daughter's home in Green Bay.


Now the paint on the wooden boards for the kick plates on the stairs were dry. We put them into place and Steve screwed them in securely. 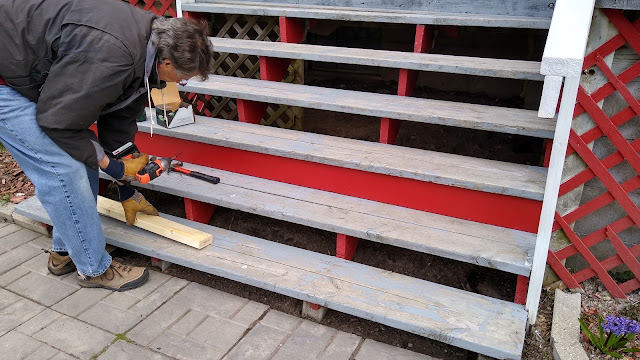 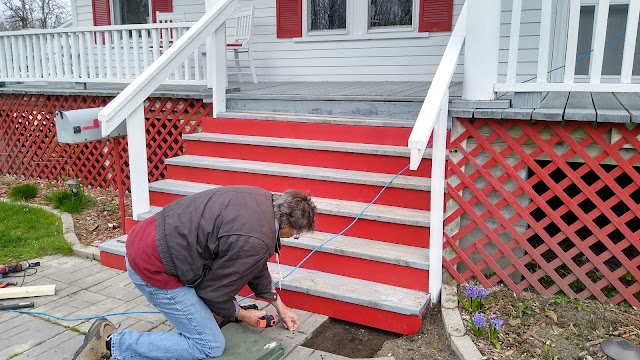 I still have to touch up over the screw holes with dabs of paint. I'm also going to paint that top grey board so it matches all of the rest.

Another job done... And the doggers signaled their vote of approval. 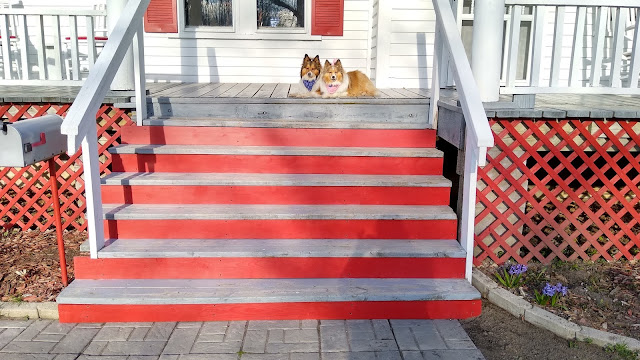 By the time this was all done, we sat back in our rocking chairs, and looked at each other and smiled.

Posted by KarenInTheWoods at 10:48 AM