Sunday was going to be dreary and dark and dull and damp. We were forecast for some snow or rain or slushy sleet or whatever. Didn't seem to be a lot of fun.

Sooooo about 8 a.m. I got a text from some of the grandkids. They wanted to come over and do a little sewing. I had previously promised grandson Clayton he could bake an apple pie. I had also promised granddaughter Chelsea that we could do another project on her new sewing machine. Time to make good on those promises.

Their parents dropped them off, along with their gear, to come and spend the day with us.

We sat around the table in the kitchen enjoying a late breakfast. They assured us that they would be very good today and work on projects and do any jobs we needed to have done. How nice is that?

Clayton asked if he could have a chance to learn to sew too? I told him that sewing is not just a woman's pastime, that many fine tailors are men that sew beautifully on sewing machines.

He loves any kind of a machine that can go go go, plus it has a gas (foot) pedal, right?

He attentively picked out the fabrics and listened to the directions. We used a paper plate to trace around for a pattern. He understood about putting the fabric right sides together and sewing on the wrong side. 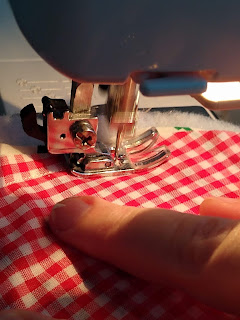 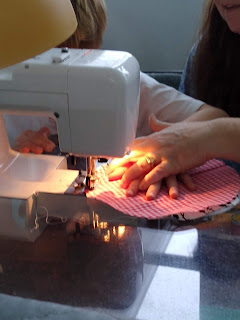 I hold my hand over his to guide the fabric
and prevent any fingers from going under the needle!

I set my machine on the slowest speed possible and helped him guide the fabric through. He did wonderfully well and was excited to turn the project right side out to see his accomplishment. We tucked in the raw edges of the opening. Now I taught him to top stitch around the edge of the entire circle. Because he had been so careful and getting used to the machine, I told him he was "graduated" to increase the speed just a little bit. So no matter how hard he tromps down the gas (foot) pedal, it only goes at the reduced pre-set speed. 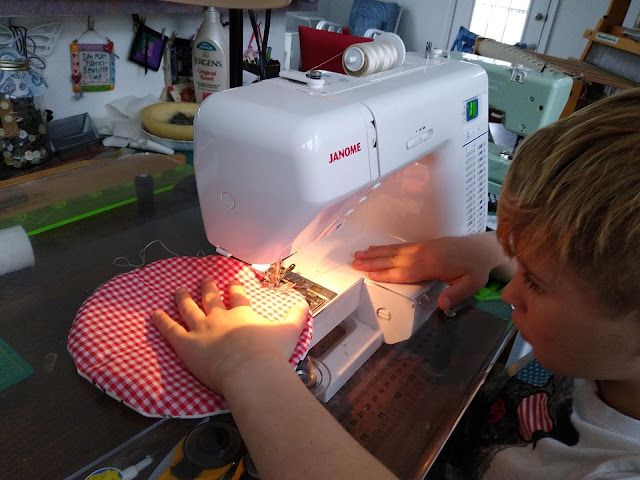 Voila!! It's a soft doggy frisbee toy!!!
Nice and soft for indoor play, and also washable.


Here is a YouTube of him explaining the process:


Then he sewed a second doggy frisbee toy. He took one home for his doggies and left the other one here for Finney and Binney to play with. 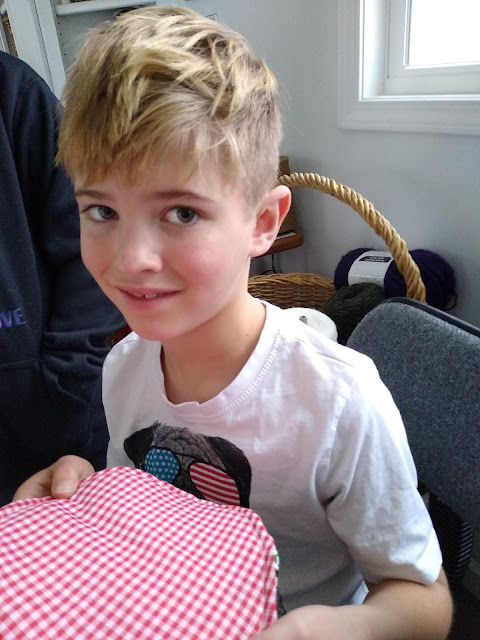 Now it was time for Chelsea to set up her sewing machine. She got it for Christmas and we had already worked on a project last week. While at home she had managed to figure out how to sew a couple of ruffled hair scrunchies, all on her own! When her mom asked her if she had a pattern, she said "No, I have it already figured out my mind!" She sure did!

At my house, she wanted to tackle something a little bit more complicated. She picked out some fabrics and some batting for in between the layers. From there we worked out an idea and a pattern on our own. We even used that same paper plate as the curved part of her pattern.

She carefully sewed under my direction, with her very safe sewing machine. No fingers under the needle and she keeps up well with the speed of the machine and feeds the fabric through. 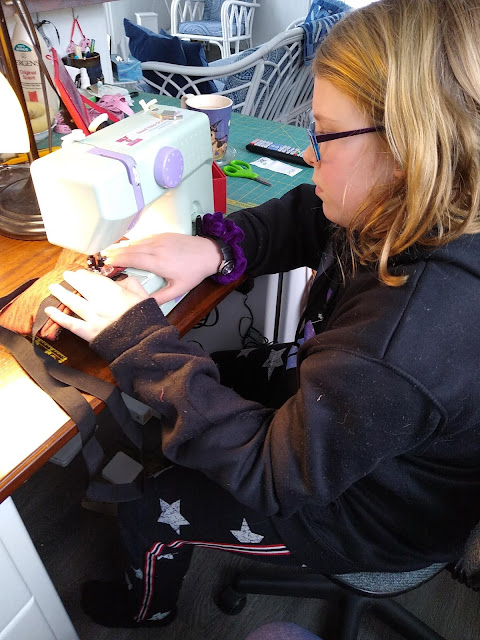 Once the initial little purse with sewn, then we had to figure out the snap setting tool to finish it off. I confess, I goofed up both pieces of the metal snap, and we had to pry them back off with a pliers and start over. 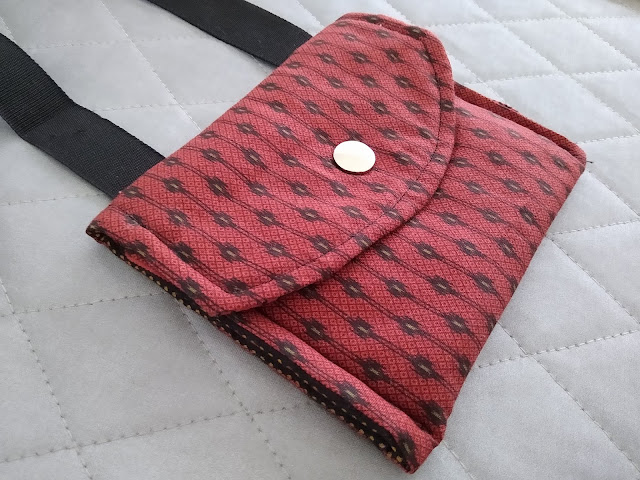 We finally got it done correctly and her little purse worked with a flap in a snap. Then we added a black strap and she was totally delighted with her new creation! 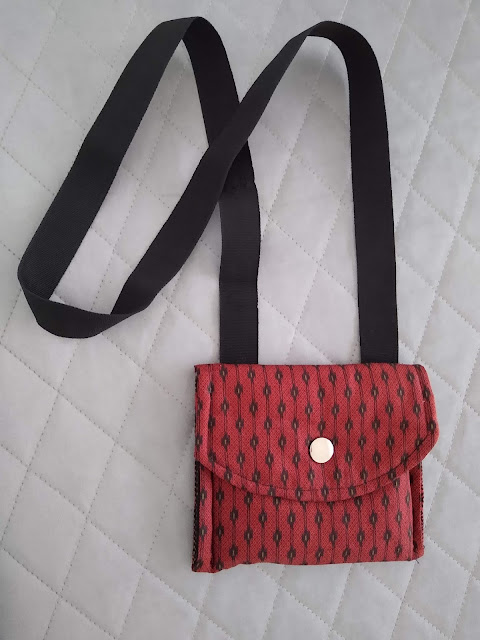 Here is a YouTube video of Chelsea
explaining how she made her purse:

She was pretty pleased with her project. 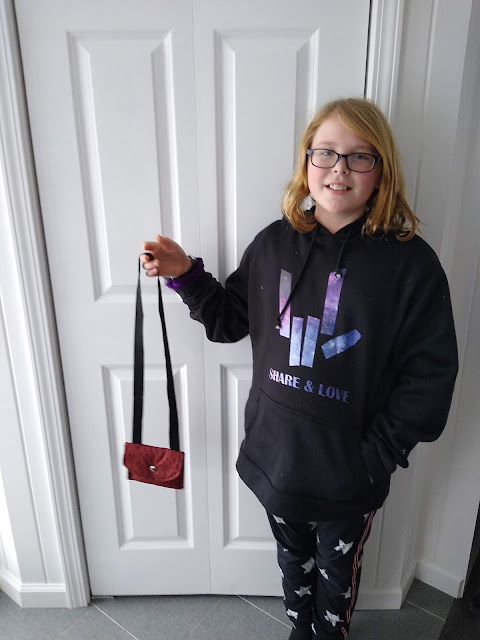 We had promised Clayton that we would bake some apple pies. He knew we had some green Granny Smith apples in the refrigerator from when he was at the house on New Years Day. We ran out of time that day to bake the pies, so this was a perfect time to do it.  Both of the kids used the little apple peeler corer device to crank out the apple slices quickly. 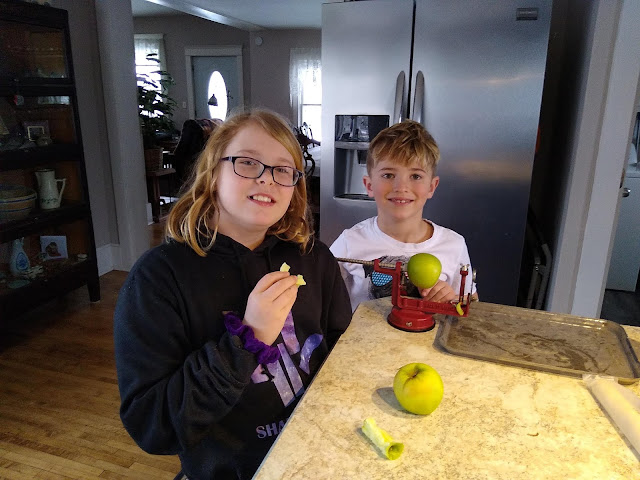 I think they really just wanted to eat
the long stringy peelings? 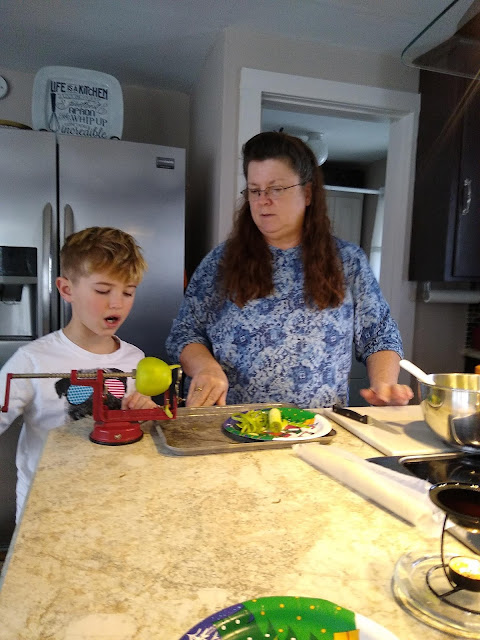 Once we had the slices made, it was a quick dump in the bowl to be tossed with cinnamon, sugar, pumpkin pie spice and a little bit of cornstarch. We pre-baked the bottom crust so it's not so mushy.

After dumping in the apples and a few dabs of butter, Chelsea unrolled the top crust across the pie.  We cheated with store bought roll up pie crusts. 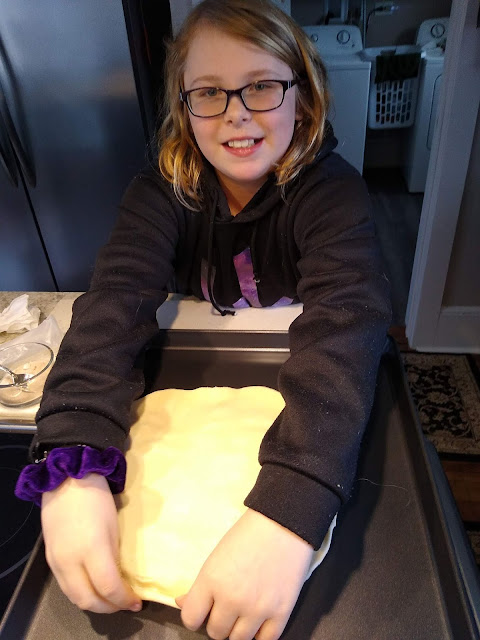 Next it was Clayton's turn to carefully use the knife to cut the slits in the top crust for air vents. Then they both sprinkled cinnamon and sugar on top for a delicious crust with a magazine worthy appearance!!! 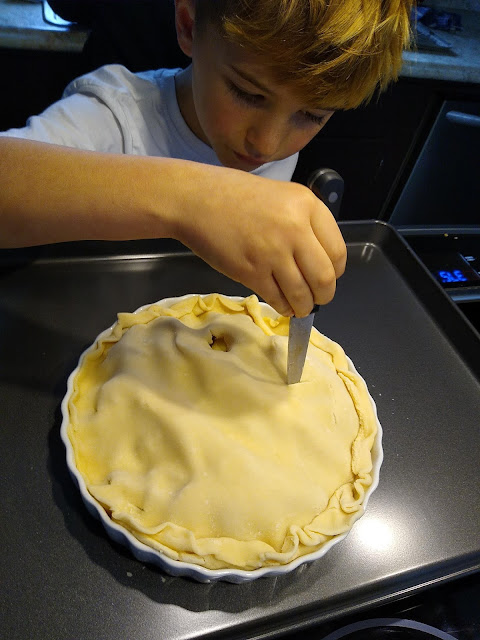 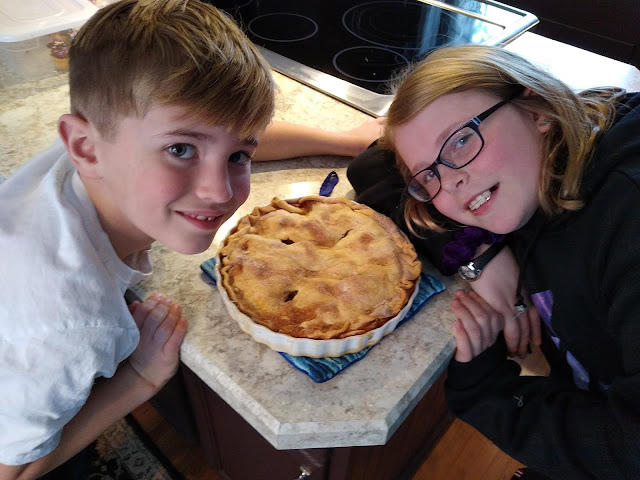 Afternoon snack with pie al a mode ....  chocolate chip mint ice cream was all we had on hand.  It was fine with them, ice cream is ice cream, right? 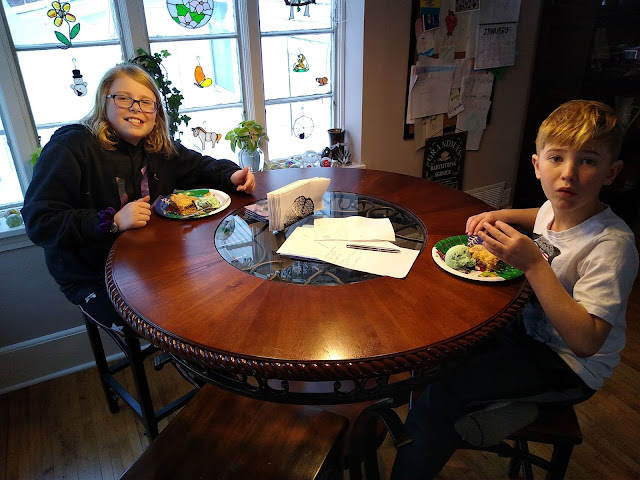 The rest of the afternoon was spent fiddling around with a few other little projects, and Clayton took a little bit of time to go outside and run around on the ice in the backyard. A lot of our snow has melted, but the ice from the excessive amount of rain flooded the back and has remained in our yard.

We had made the news last week when the excessive rainfall created an ice jam in the city along the riverbanks. The river of course overflowed and into all of the houses and businesses all along the river on both banks downtown. 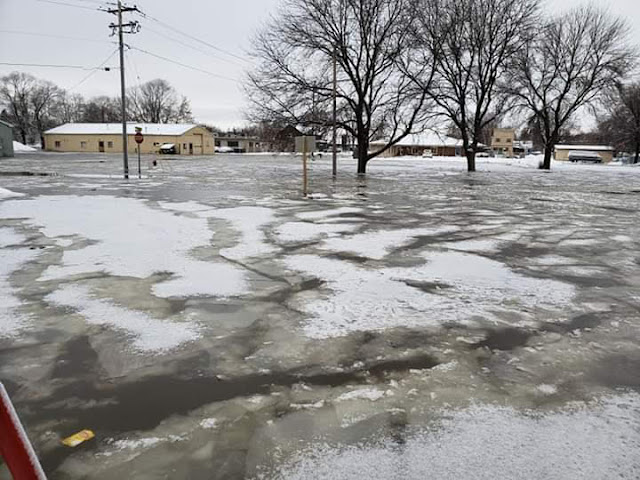 At our house, we were fine, being about 15 blocks north of most of the flooding. But the backyard is only a mile or so from the bay and the waters have oversaturated the ground across the whole swamp. There's nowhere for it to go. With the frozen ground, not a lot of saturation can happen at this time of year. 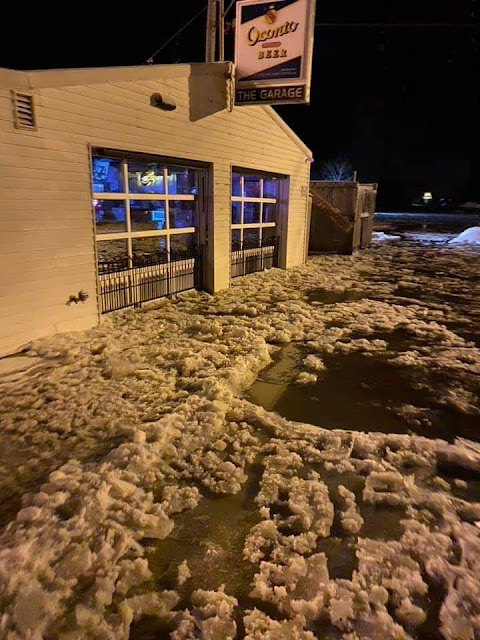 The storm sewers backed up and streets flooded even further away from the river. This is down the street from us about 10 blocks away. Ack! 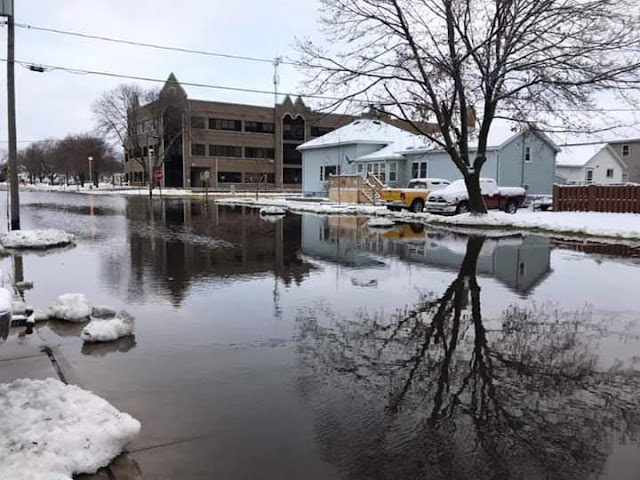 The city had to hire a barge company from Sturgeon Bay to come across the Green Bay through the frozen winter waters.... to come in our harbor and chop away at the ice to get upriver,  They had to bust loose the ice jam to get things flowing again. They worked round the clock for three days to get the ice jam freed and things moving from under the bridges. I feel really bad for the people who have had flooding in their homes and the New Year holiday rudely interrupted by evacuations and basement cleaning. 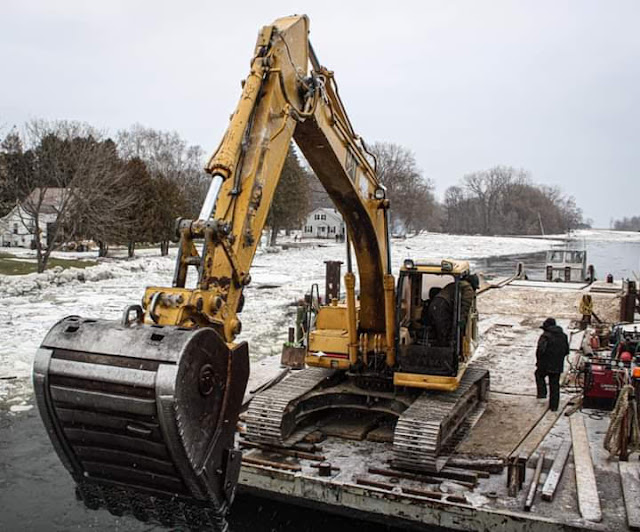 Let's hope things can get back to normal now as the temperatures drop again. The river should freeze over smooth and have a normal flow under the ice out to the Green Bay.


Late afternoon, the kids curled up with me for a while on the bed and we rested/napped a bit while Grandpa kept an eye on the playoff games on the TV. It really was a lazy day while the snow was falling outside.

It was getting close to supper time, and those two little stinkers had me text their mother to find out what was on the dinner menu at their house. They compared it with what we were going to make, and decided to just stay right here!!

Clayton was catching up on his favorite YouTube show while Chelsea and I cooked up a delicious supper of beef stew from leftover roast beef, potatoes and carrots from the night before. Chelsea made up a big salad and we sat down to eat at the table, complete with candlelight. (at the kids' request). 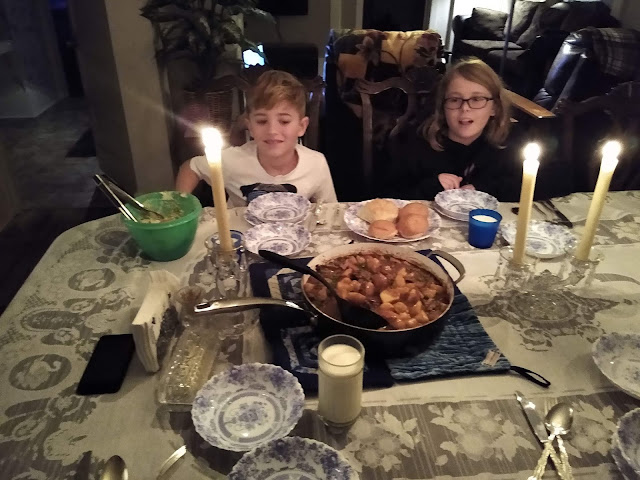 They really didn't want to go home in the evening, but it was time for them to get back into their routine and get their baths and bedtime for school the next day.

Today the mail arrived and I've got some cute little sets of LED strip lights to put in my sewing machine throat. The bulb in my Janome 8077 is not very bright, so this added strip of LED lights really helps. 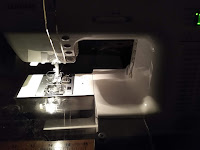 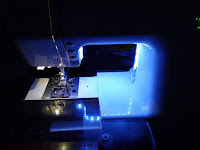 I ordered three sets in all, one for my larger Janome 1600P DB mid arm machine, and one for little Chelsea's sewing machine which doesn't have any light at all!

Steve has been putzing around, cleaning up some of the electrical connections and re-routing some circuits in our house. He added another outlet to the other side of the kitchen island today. Separating the leads so they are properly wired individually to the outlets. 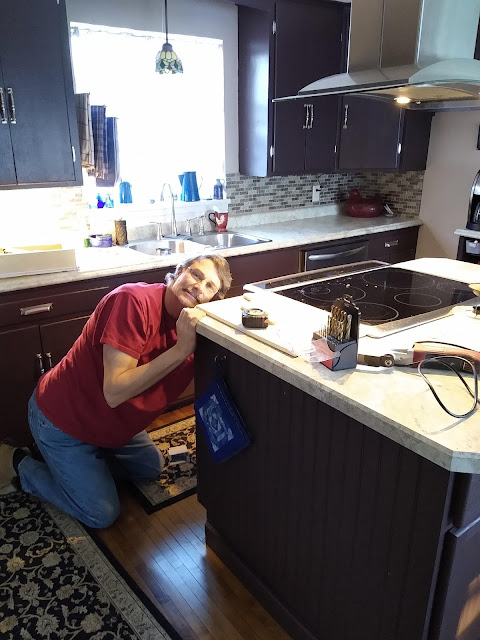 No more popping breakers if I have the pressure cooker or crockpot going, and accidentally turning on the microwave or coffeemaker.  Now the outlets on each side of the island are separate from each other, as well as separated from the ones along the wall of the counters and cabinets. 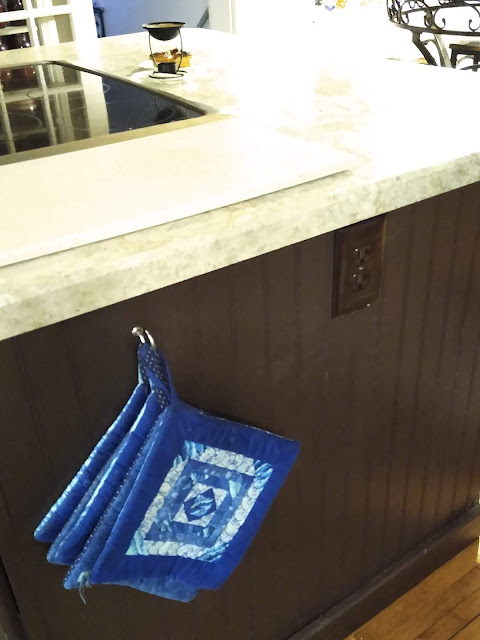 Now it's all Dapper Dandy Do!

Wonder what our next project will be???

Posted by KarenInTheWoods at 8:14 PM

Labels: barge from Sturgeon Bay, flooding in Oconto, LED light for sewing machine, outlet in the island, sewing with grandkids