Back to Projects in Our National Folk Farmhouse

Now that the holidays are over, it's back to working on projects again in our National Folk Farmhouse.

The she shed was officially done before the holidays. Steve finished up the corner closet, added the door and trim and I got it all painted. 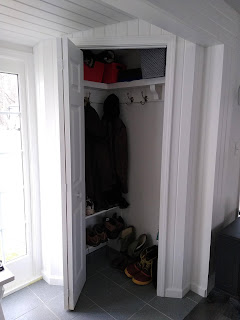 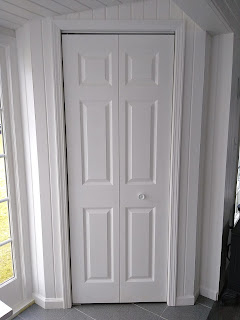 By putting it on an angle, it doesn't block our views out any of the big french windows looking out over the backyard. 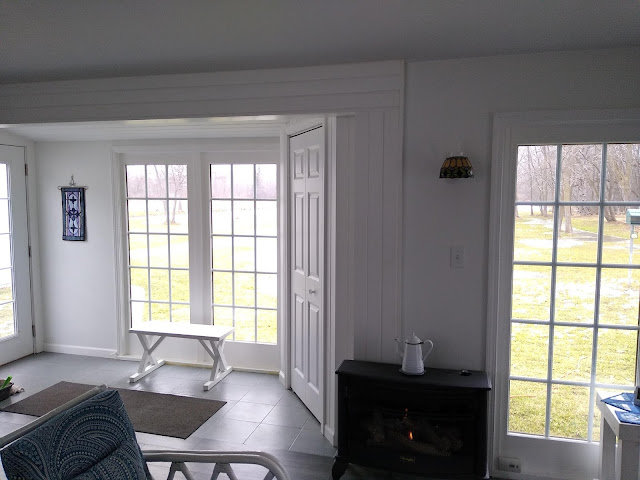 It's so nice that we get birds, squirrels, deer and even a few rare ones like foxes and coyotes out in the back.  We turn on the spot lights at night and surprise them.

I didn't write a lot over the holidays. Number one, because we were so gosh darn busy. Number two, just because it was all about family and decorations and festivities are really didn't have anything to do with house projects or traveling.

We gathered with most of our kids and grandkids the weekend before Christmas.

The she shed worked out very well for a family gathering place and many members congregated in there to visit and play.  We were also gathered up in our living room for present opening and around our dining room and kitchen for our large meal. I was very pleased to have a dining room big enough to have my dining table stretched out with both leaves and all eight chairs around it. The older grandkids sat at the round tall table in the kitchen while the two littlest wee ones at the play room table and chairs brought in for just the occasion. Our girls brought seafood!! Steamed crab legs, shrimp and clams while our son in law made a beef brisket. It was so much fun to be cooking in the kitchen with my two girls and having happy grandkids running around our feet, chock full of holiday excitement and sugar!

Erin and Waylen bought us all matching bear jammies! 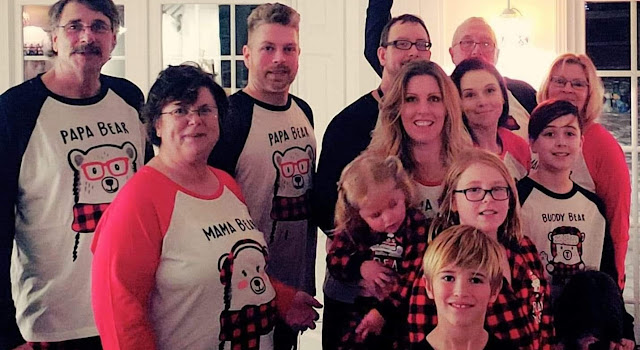 Then we kept all of the grandkids overnight for a sleepover. 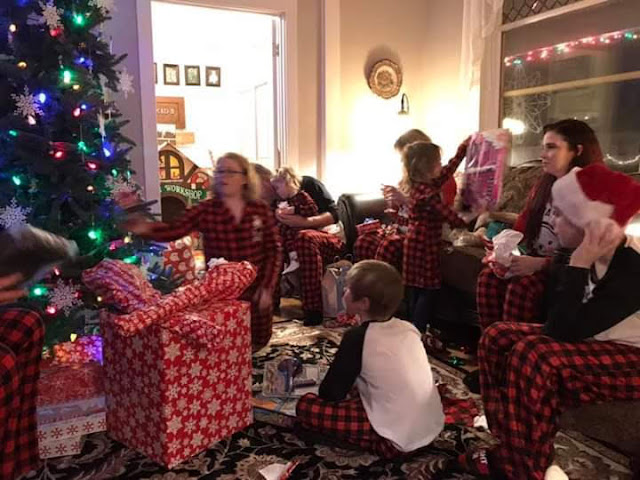 Our Christmas holiday was delightful and we also traveled on Christmas Day up to the tip of Door County to spend the day with Pops Pfundtner. We brought a big ham dinner with all the trimmings to celebrate the day with him.

Now it's the New Year and time to get back on the project program with our house.

When we bought the house in April, we knew the red clay tiles of the fireplace hearth were cracked and loose.  We just put the larger oriental rug overlapping them to cover them up until we had time later to replace them. We decided the time was now!

While walking in the local big-box store Menards, during Christmas shopping, we saw some large 18 inch ceramic tiles that caught my eye. They were on special clearance of only 99 cents each. Can you believe it?  Enough of them came home with us to span the entire width of the fireplace hearth. 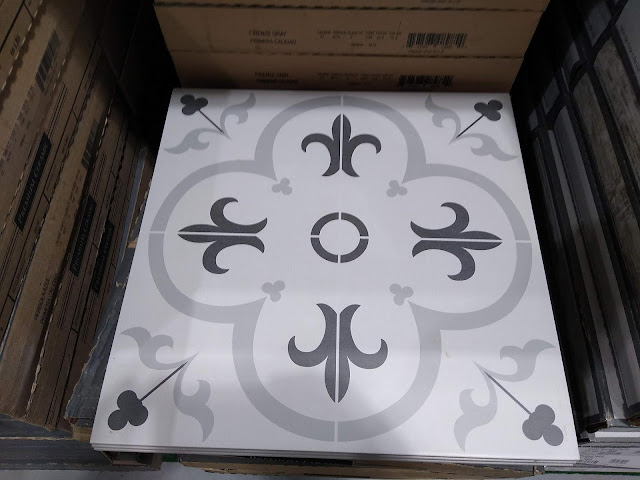 We invited grandson Clayton during his Christmas vacation to help do a little demolition. He was thrilled! Give a boy a little hammer and a screwdriver and tell him to go to work on some broken red clay tiles for our hearth by the fireplace in the living room. 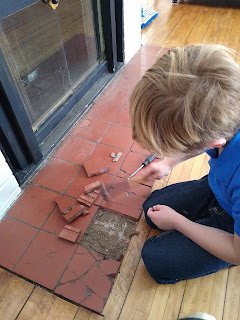 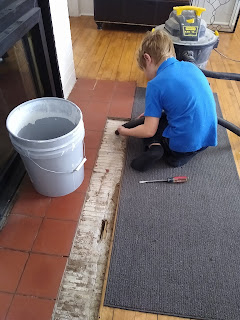 Oh boy, did he have fun. He first started removing the broken pieces a chunk at a time. Then the big goal was to try and remove a full piece without breaking it. This was difficult because the tiles were old and brittle. He was finally successful and managed to get TWO complete tiles removed without any cracks! What a challenge. 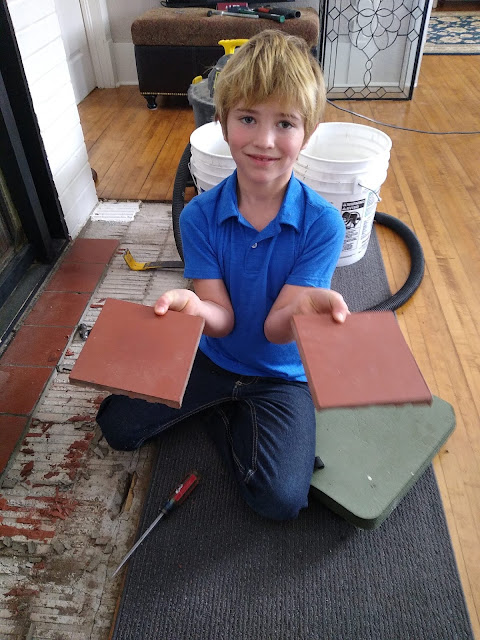 He would remove a few tiles at a time and then put the pieces in the bucket. From there he would run the Shop-Vac and suck up any of the extra little shards. It was a very clean neat job and all of the mess stayed right at the fireplace hearth and not dragged around the room. 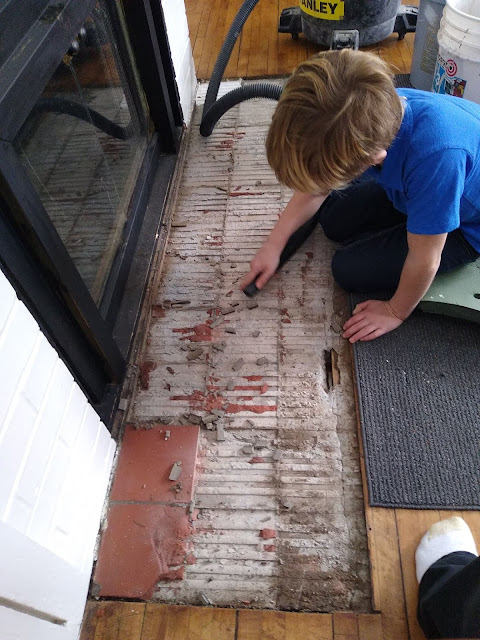 Pretty good job for a seven-year-old kid. He managed to remove all 33 tiles and only once in a while did we have to actually chisel one away with the pry bar and a larger hammer. 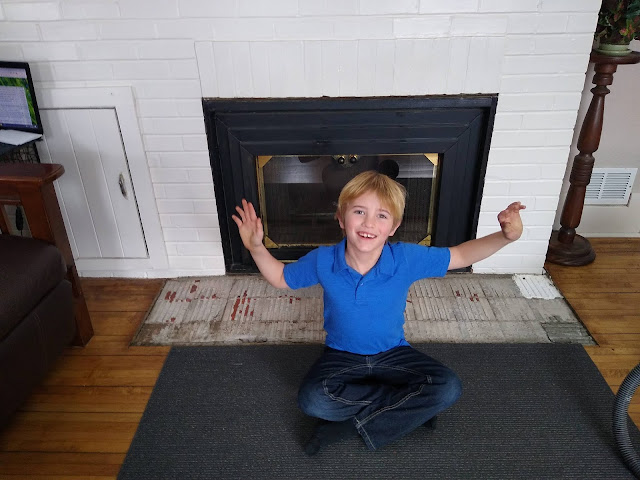 He also helped to swap around the rugs
from the living room to the dining room.

He had a little mishap that he called a "technical difficulty" while unrolling the smaller one in the livingroom! 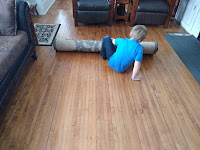 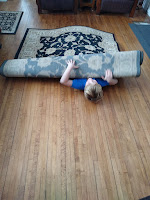 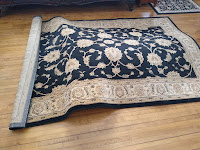 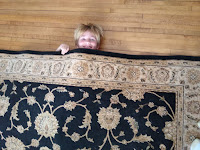 Once his job was all done, we offered to pay him. He declined, saying no he just wanted to be nice --- and besides, it was fun!


He also decided that since he had the Shop-Vac out, he would clean the the firewood cubby compartment. It was pretty dusty and dirty in there so he took care of cleaning that up. Then he used a sharpie marker and wrote us a message on the wall inside. What a great idea! I think I will let each of the grandchildren write us a message in there on the wall. We had done something similar to that while we built our house out on the Oconto River in 1997. We let the children write messages to the people of the future from the people of the past - and closed up the wall.  I think our grandkids writing in this cubby will be a cute time capsule. 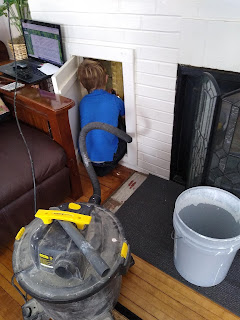 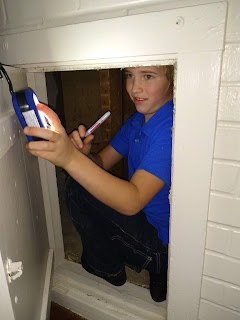 Here is the message that Clayton drew for us. What a wonderful secret hideaway complete with his secret message. 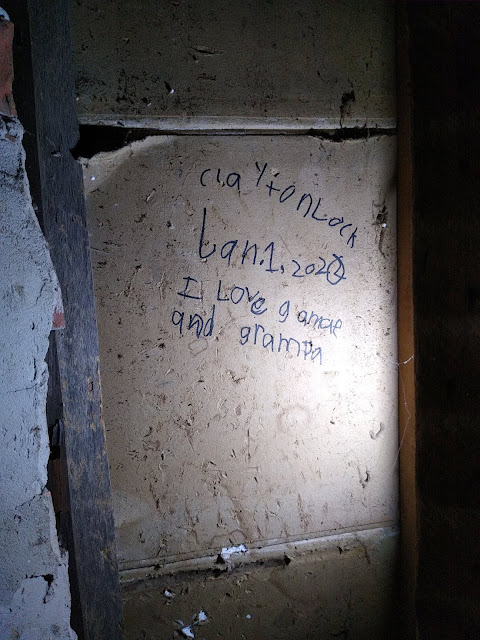 We decided to extend the span of tiles along the hearth to go the entire width of the fireplace. The original red tiles only went up to the little firewood cubby door. Steve carefully cut away at the rest of the hardwood flooring to extend the recessed areas for the tiles.

Once he had the hardwood strips removed, then he filled in the extra gap in the floor with some subfloor to make it level with the rest of the recessed space. 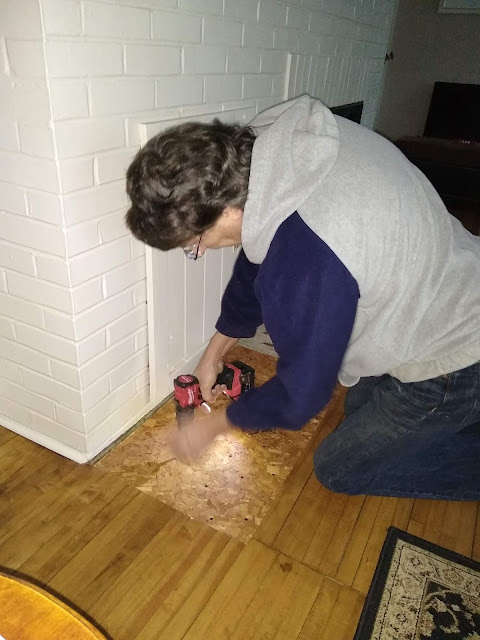 This morning Steve decided it was time to mix up the mortar and start to install the tiles. Carefully laying down cardboard and prepping his work area, I was his gopher and watergirl as he mixed up the mortar. 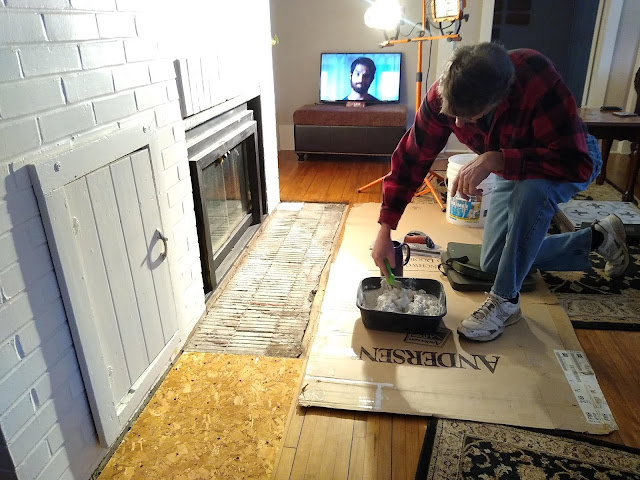 The first tile is always the scariest,
so we made sure it was square and level with the wood floor. 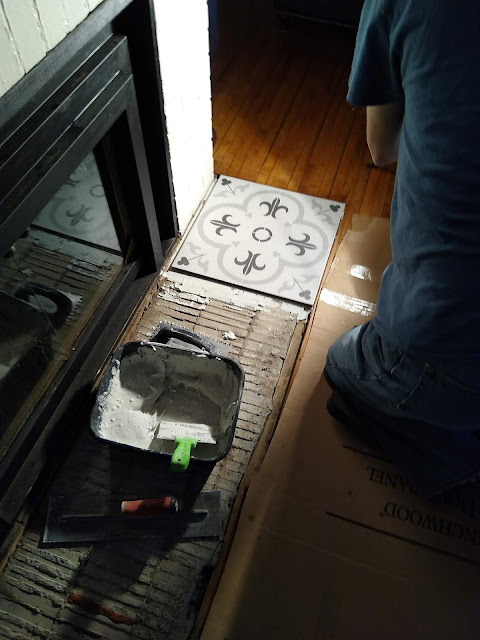 Tile number two going down and matching up perfectly! 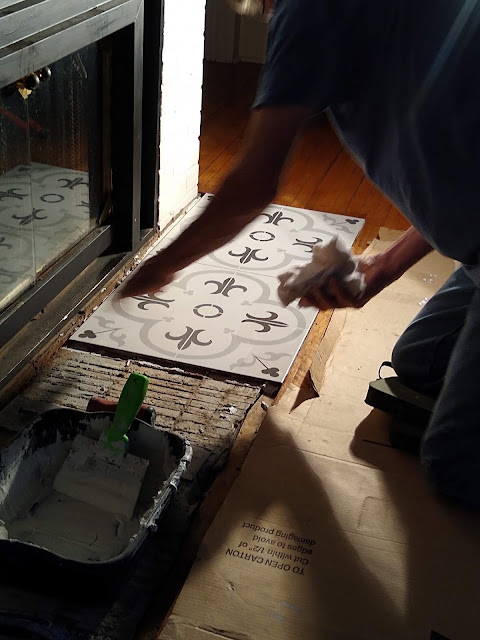 Here is tile number three in place,
and it's looking SO good to me! 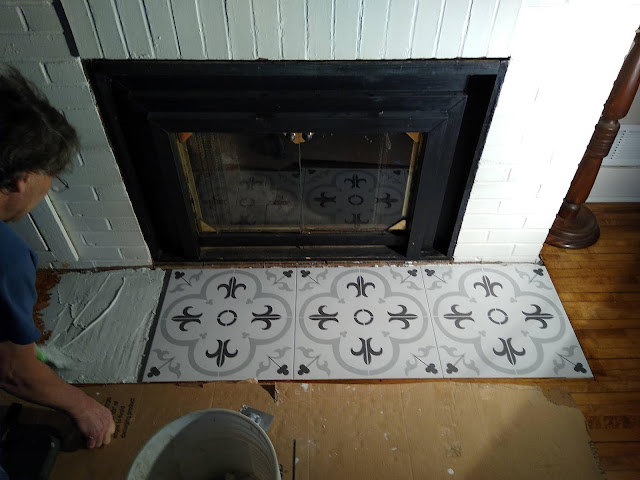 Tile by tile, it is transforming the hearth into a beautiful new pattern. 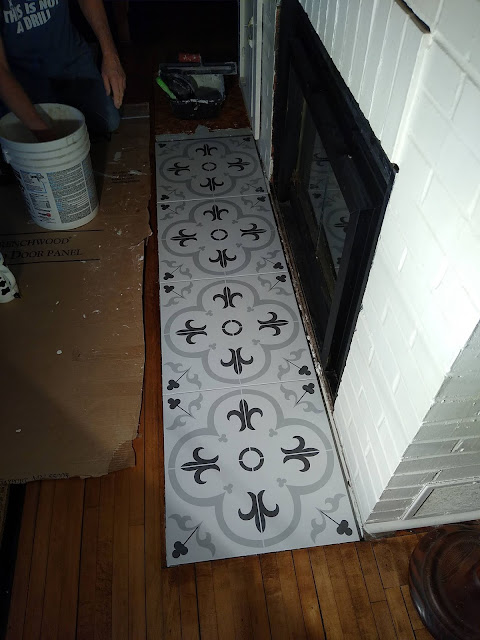 Tile five is down and now he has to measure carefully
and cut the sixth tile to fit. 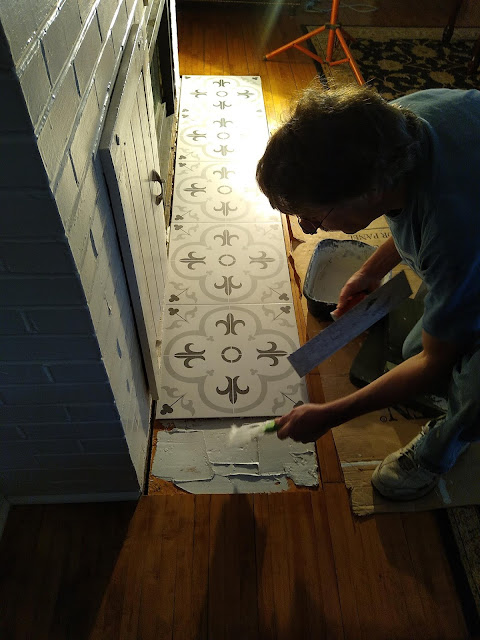 There is number six into place....
or should I call it five and half? 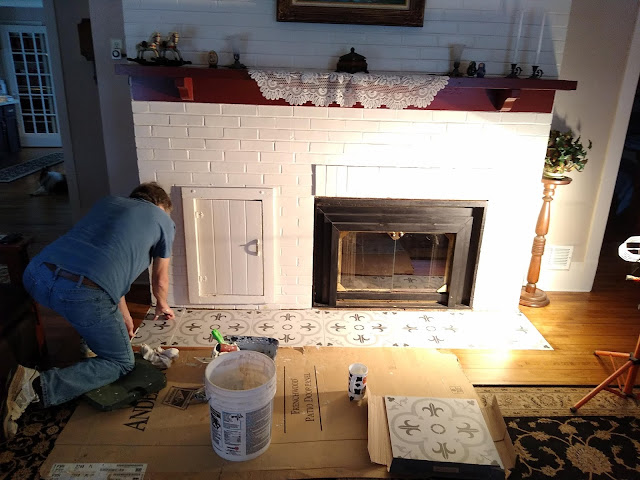 What a change from the cracked old red clay tiles! 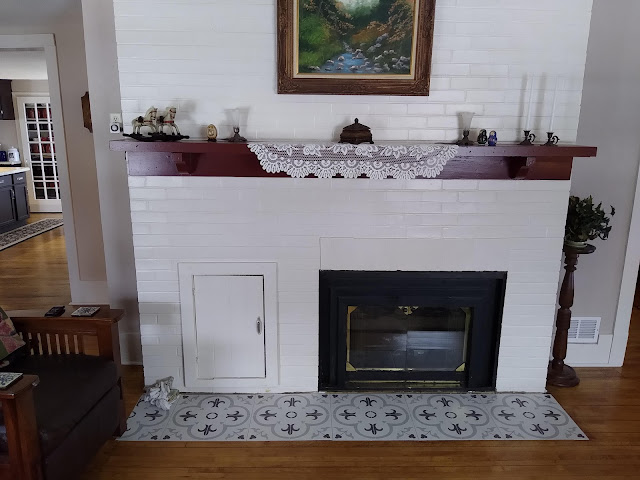 (the leg of my chair is holding the last corner level)

I am glad we went the entire width of the fireplace.  Before the red clay tiles were only up to the firewood cubby door.  That was kind of awkward and unbalanced.  Now it's more symmetrical.

A bit of grouting and we should be done with the tile.  I think that I am going to paint the mantle to match the color of our furniture a bit better. We are going to replace the wood burning fireplace with a gas log one in the future. For now we will just put the leaded glass fireplace screen over it to cover up the old pitted brass trimmed doors.  (this is a "before pic" to show the screen) 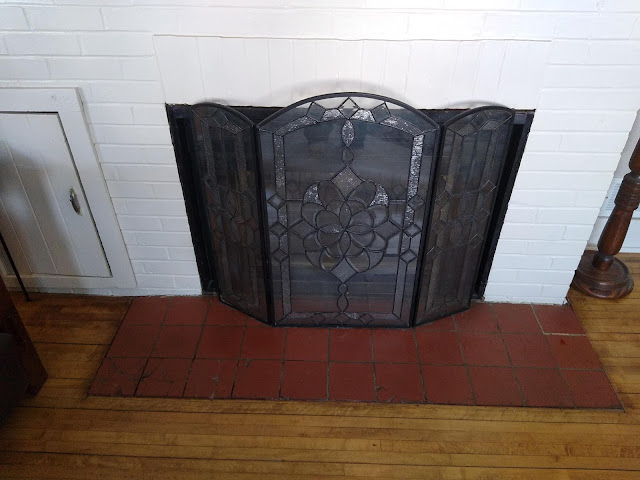 Time to run now. Steve's older brother Mark and his wife Anne are stopping by in a bit to see our house and head out for lunch together.  Will write more about our next project tomorrow!

Posted by KarenInTheWoods at 12:12 PM