I would like to start out tonight's blog with a special note. I am requesting  an unspoken prayer request for two close family members that had an incident. Things can change in an instant. Please tell your family that you love them. They will be okay, but prayers will be appreciated.


Scrub-a-dub-dub
This birthday chick's got her tub!

But first off... We had to page Dr. Stevieo. He donned his blue rubber gloves because he had a sterile job to do. 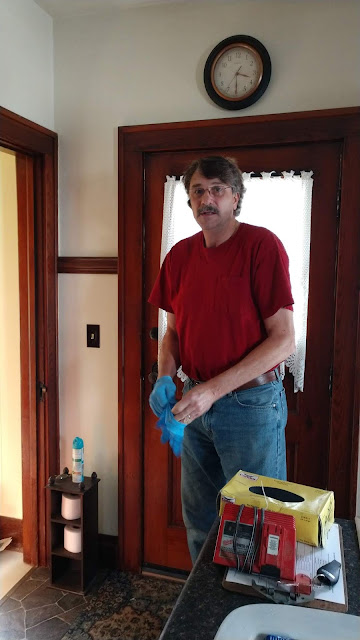 Remember in my last blog I mentioned that he was going to redo all of the plumbing from the upstairs down to the basement? He is bypassing all of the old steel pipe drain lines which are a hundred plus years old. Everything now will be new PVC and up to code.

Well, part of that project had to do with the toilet in the half bath on the main floor. The piping from the half-bath toilet was still old cast sewer pipe. Since he is replacing all of the pipe in the basement, that means ripping up the toilet in the half bath and changing out the flange and elbow to a new PVC flange. The little corner sink we put in the bath a couple years ago already has new plumbing.

Of course, don't you know--- when he got down in there to remove the toilet, the floor itself was in rough shape and needed some beefing up as well. So he cut out the bad areas, installed new support wood, put in some new subfloor, and a new wax ring for the toilet. That took up the entire morning and soon he had the toilet back in place. Everything was functioning again. 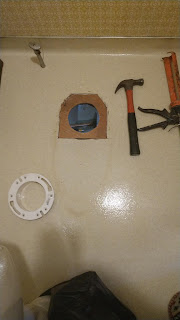 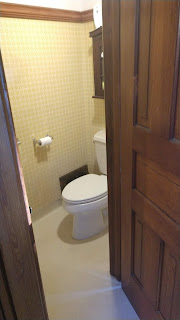 Upstairs, we had some creative decisions to make. The bottom of the tub has a number of circular support feet to help hold the weight of the tub on the floor. We had to transfer the designs from the bottom of the tub onto the floor so we knew where we could make a cutout for the piping to drop down. Because there is no access from the side wall, all of the plumbing had to be installed in place on the tub as we set it down. So Steve has to cut a channel in the actual floor between the joists for the pipes to fit down into. If there is ever a plumbing issue under the tub, we will have to remove the trim screws around the tub and lift the entire works back out again from the corner. Either that, or cut up from the ceiling below in the back stairwell.

By using some large sheets of taped together freezer paper, and a piece of sidewalk chalk, we made a rubbing of the bottom surface of the tub with all of the little support feet and drain sections preserved onto a template. From there we transferred it right onto the old flooring and traced where the support brackets needed to be. Now we knew the route that we could send the drain pipe over to the down drain to the basement.

As much as Steve hates templates, it was my idea to do it this way. He did admit at the end that it was a good idea! 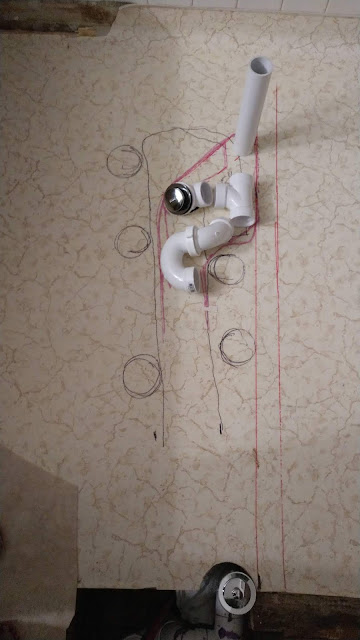 Here is all of the plumbing mounted directly to the tub. The tub is laying on its side in this picture. This is the drain and the overflow pipes attached right onto the tub. Now it is ready to drop into place because Steve cut out a channel in the old flooring. 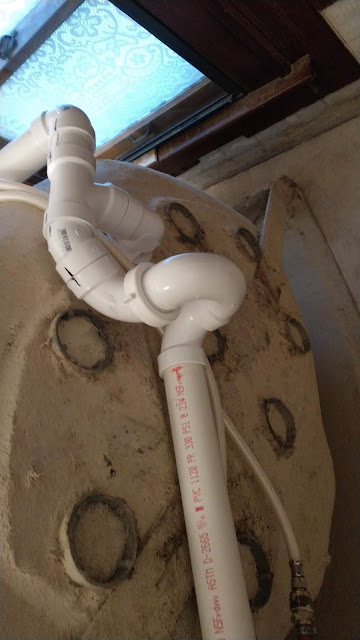 On the top corner of the tub seat, he drilled in the hole for the faucet. This is actually the cute faucet from our last bathtub that we are reusing. I just loved this one when I saw it in the store and it reminded me of a a little well pitcher pump. Actually, I think it was my birthday present from him 3 or 4 years ago. I was glad we were able to make it work for this tub. 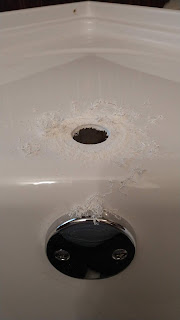 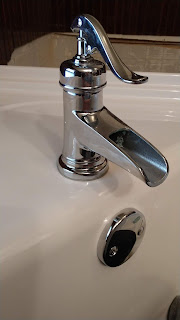 He attached all new PEX water lines for both the hot and cold water.  The old water lines were copper pipe, connected to lead pipe in the basement. It's nice now that everything is fresh and new and up to code.

While he was working on configuring the drain pipes and traps, he had these two supervisors take over to make sure he was doing a good job. 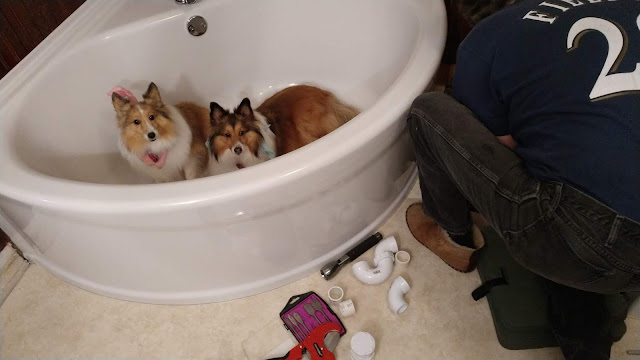 Little Finnegan intently observes everything he does,
while Binney just barks her fool head off every time he runs a drill or a saw.

I popped them into the tub to keep them out of the way.

Soon he had all of the plumbing hooked up and tested. Now both the separate standalone shower and the tub each have the correct trap and a vent as well. That was never done before in the old days and was probably part of the problem why the tub or shower did not drain very well. He capped off the old pipes even though they're not connected to anything downstairs. He's going to leave the old steel pipe in the wall but he was able to pull out the copper one. We were fortunate that he did not have to bust up any plaster in the route from the second-story down through the first story wall in into the basement. 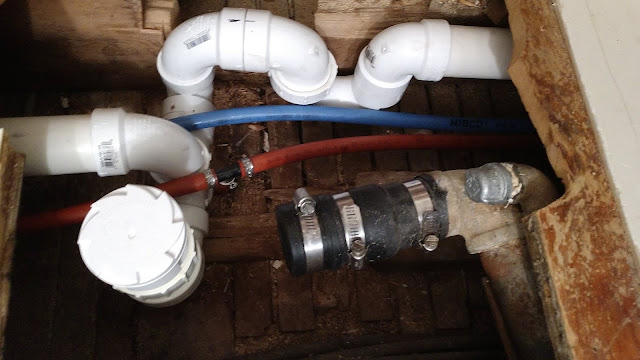 He has new subfloor and flooring to put over this access spot on the floor and we can always open it back up to address any plumbing issues in the future. Hopefully not, of course.

He said we should test the tub and the shower both right away just to make sure there are absolutely no problems with the setup. As my tub was filling, I prepared my new birthday bath spa caddy tray. I ordered it from Amazon 2 days ago and it came toot sweet. It also had with it an extra bath pillow which I really needed and a little overflow plastic cover to allow you to allow a tub fill a little deeper. Never fear, I don't even need to use that because this tub is plenty deep enough!

I poured myself a glass of wine, got myself some aromatic candles flickering, a bar of scented soap from my friend Rosalyn and enjoyed my bath. I set my little tablet securely on the rack. Don't worry, it's not plugged into an electrical source. And if it ever did get wet or fall in the tub, it's no big loss. It was a free tablet I got from a phone deal many years ago. 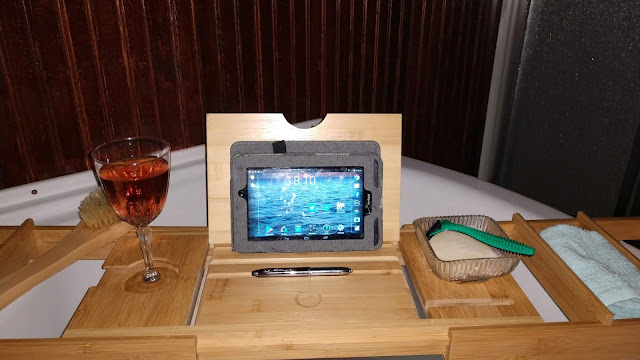 I am happy to say that the tub worked perfectly. The water heater was plenty fine to fill the capacity and actually it was a little too hot to begin with. The last tub was 60 gallons and this one is 71 gallons. I will have to adjust my fill temperature or get into the tub sooner to adjust it as it fills.

Steve tried out his separate shower and everything works perfectly with the drains for both units. In the past everything tied together between the shower, the tub, the sink and the toilet. All four items on the same line to go down to the basement???

This morning, Steve started putting some of the trim back in the bathroom. It took some special cuts carefully with his jigsaw to replicate the shape of the tub especially around the base. He was able to get some of the baseboard back into place and it looks custom-built to me. He does such fine work and is so talented. I am so lucky to have such a wonderful man in my life who enjoys doing this type of work as well as enjoys creating such a wonderful birthday bathroom oasis for me. 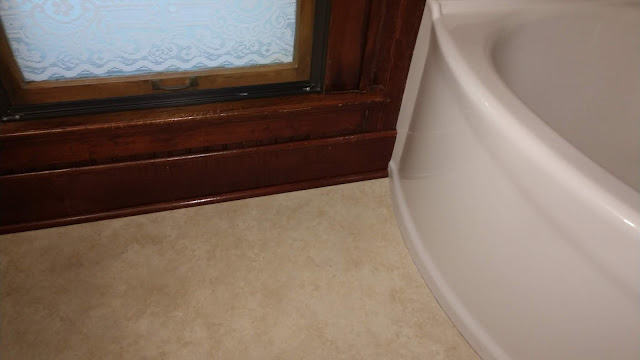 I decided that if one bath last night was good,
then another bath tonight would be even better!

So tonight's blog is being dictated to my tablet,
directly from my
Birthday Bathtub! 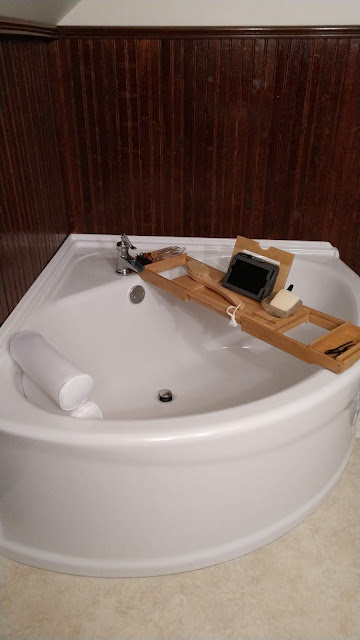