Since only 2 of the 3 parts are in for the motorhome repair, my Steveio is just waiting around with nothing to do. Oh my... that is NOT good for him, is it?

Well---- a while back he mentioned that both our shower and bathtub upstairs are draining slower and slower.  Even with cleaning out the trap, they are the last of the old original steel drain and copper water plumbing pipes left in the house. The rest has all been replaced with newer PVC drain pipes and Pex water lines.   He said in order to drill in a new hole to go down inside of the laundry room wall on the first floor, then he would have to pull up the bath tub to get access!  Oh my, that is not good either.

On Sunday night, he said that since he has to pull up the tub, would this be a good time to actually get the bigger corner tub that I looked at 5 years ago when we first redid the bathroom??  It was not in our budget at that time and we bought a cheaper regular tub instead. We decided to put the money into the separate stand-alone shower.  The tub was fine, and it was deeper than most on the market. I was happy with it.

But in our last home, in Oconto, we did have a big corner tub which was soooo nice! It was good for soaking, or bathing grandkids, or even getting a romantic evening as it had a two-person capacity.

I said to him: "Yes, a corner tub would be nice, but we are watching the budget for the motorhome brake repairs, remember?"    Then he turned around his laptop to show me his screen of what he found on Craigslist!!!

It turns out that last year, a guy had bought the same exact tub that I had looked at 5 years ago.  It had to only be 4 foot on the side walls because of our window placement. The more common 5 foot ones are too big for our bathroom configuration.  So I knew that the 4 foot Lyons Sea Wave was the only one that would fit in our house.

That Craigslist guy brought this tub up to his cottage near Rhinelander and planned on remodeling his bathroom up there.  It took over a year and a half before he was ready to set the tub in place, and guess what?  It was TOO BIG for his cottage!  Now it was too late to return it. He listed it on Craigslist for a very, very good price.  He was only asking $150.  New it is over $600.  Steve said we can re-use my same faucet and drain and it can be my early birthday present. Wheeeeee!

Steve said "Let's hook up the trailer and go see the tub".  It was a little trek over to Wisconsin Rapids where the guy lived. (about 90 miles one way)  He met us in the parking lot at his place of business.  He and Steve wheeled and dealed until they settled on $130.00  Ahhhh that sure is a nice early birthday present for me.

We drove home and while he had it in our own driveway, Steve MADE me get in the tub and try it out.  Hahahaa I knew I would like it, because I sat in it 5 years ago on display in the store too. 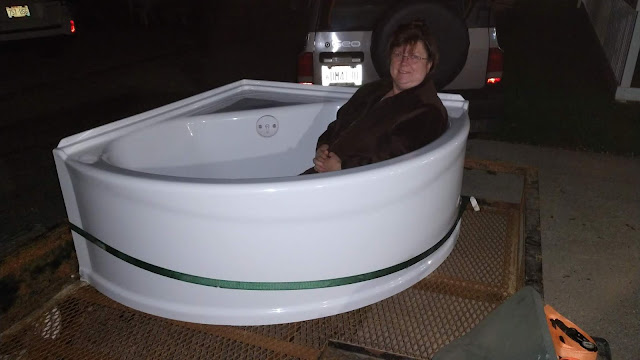 I could just see it---
full of bubbles,
soft music,
and a glass of wine! 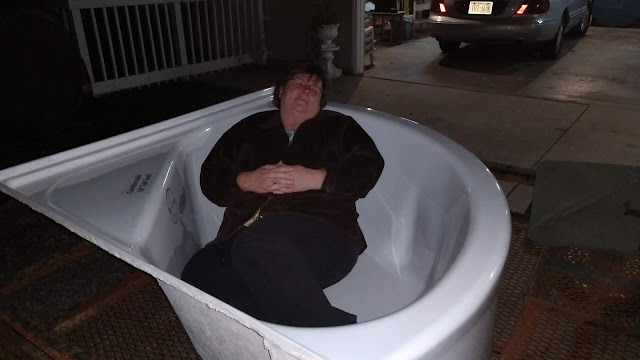 Monday morning he had a little time to get the old tub unhooked and removed from the corner in the bathroom.  Underneath where it was located is where he needs to put down the new drain lines with proper traps and a vent (which weren't correct in the old plumbing configuration anyhow). 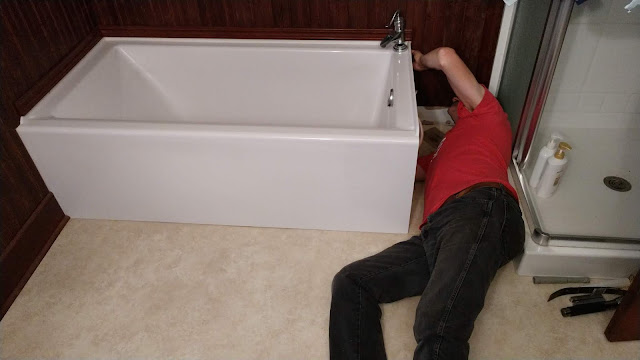 There... the old tub is out! He had to leave and drive for his job later on that morning, but we carried the old tub down and set it in the garage. It was only 70 pounds and we managed that easy enough. I am going to sell it on Craigslist and Facebook Marketplace because it's just fine, and only 5 years old.

Now he has the access room to put down the new drain pipe and lines and cap off the old ones.  In the meantime he set the bath tub faucet (that we are re-using) into the shower stall next to the tub to the right.  Just in case of it getting bumped, I taped the lever down.  The shower still works, as he later capped off part of the old drain that went to the tub. 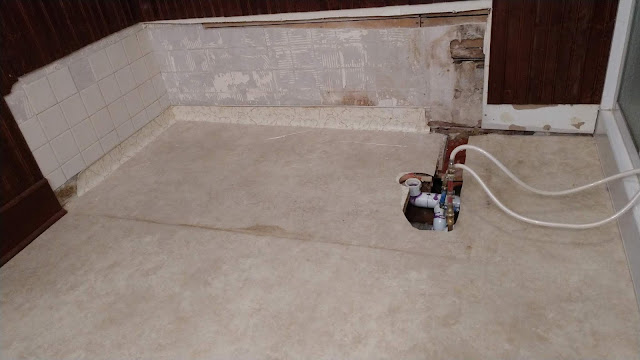 We carried up the new tub together. It was a bit awkward around the three turns of our front staircase, but we made it!  It weighs 110 pounds, but between the two of us we managed to get it up there. Whew!  It's good that we are doing these projects while we are still strong and in our late 50's for me and 60 for Steve.  We won't be able to do these kind of house remodeling projects 10 or 20 years down the road.

We set the tub into place to take measurements and figure out the drain placement.  We have an extra piece of flooring and sub floor to splice in later to cover the open older plumbing area. 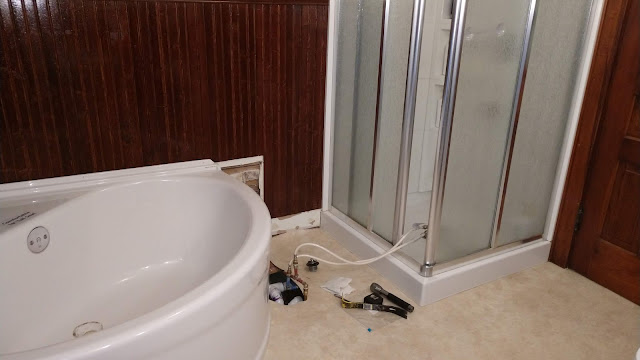 The new tub is shorter in length on the side walls (4 ft vs 5 ft) so luckily we have extra beadboards from when we updated the walls last winter.  I am glad I saved the leftovers! We pulled the boards back to remove the short ones and replaced them with the longer ones to fill in the gap.  The baseboard will go back on once we set the tub into place permanently. 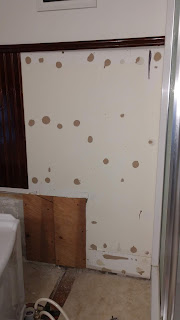 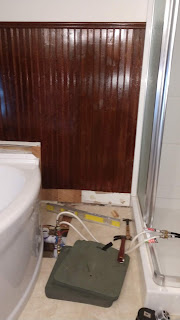 Steve drilled the new drain hole using a hole saw.  Oh wow... they sure made houses strong and sturdy in 1913!  We don't hear a lot of upstairs noise and that is because there is a 3/4 inch subfloor of heavy old pine, then 3/4 of an inch of thick hardwood flooring (the bathroom had been originally wood floors!)  and then a subfloor of 1/4 inch thick wood too.  Then the wall plate was also 2 inches thick to drill through as well.  Back then in 1913 real 2x4 boards measured 2" by 4". 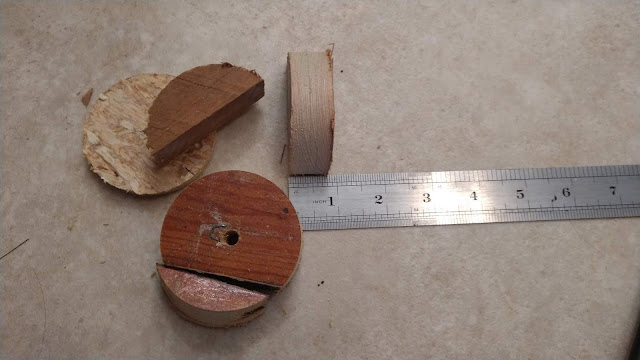 Steve had to go and drive again today for a while, so he had to let the project sit and percolate in his brain. What a frustrating thing for him to have to do.  He loves projects and says this is his version of "fun".  Once he got home, he couldn't even wait for me to cook supper.... he went right to work assembling the drain pieces and dry fitting and double checking the measurements. 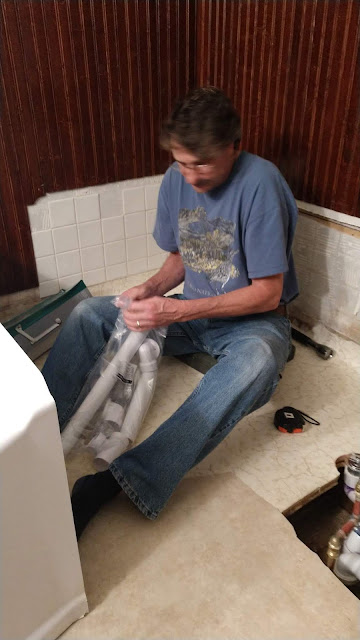 You know the old adage:
"Measure twice - Cut once"
It works on both wood and on plumbing. LOL

He then went down in the basement to double check where the old pipes were tying into the newer sewer pipes that were installed back 5 years ago. Now he can bypass the old cast iron sewer pipes and everything will be new plumbing, once he ties it all together.

While he was doing that, two little Nosy Rosies came in to see what was going on.  They like to bark at the drills, saws and hammers.  I popped them both in the tub to keep them out of trouble.  Do they look like they get into trouble?? 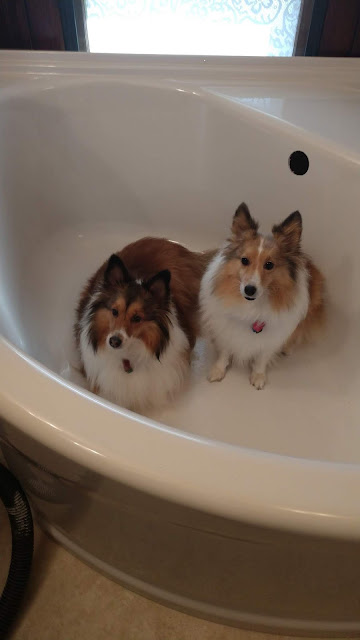 After supper, I decided that we should relax a bit. He put in a full day between tub removal, taking measurements, drilling holes and then working for 4 hours.  I made up some chicken stir fry and we are settled back in our comfy chairs.  He is antsy and I am thinking he is going to pop back up and go double check something. Soon I will hear a saw or a drill or something going on?

I was looking online and decided to splurge on something for my new bathtub too.... my old chrome bath caddy won't span the wider tub width, so I found this one that will go to 42 inches wide to fit the new tub. How nice is this?  It's made from bamboo to withstand moisture, and has legs if I want to use it as a bed tray too.  Happy Birthday to ME!  (even though my birthday isn't until October 31) 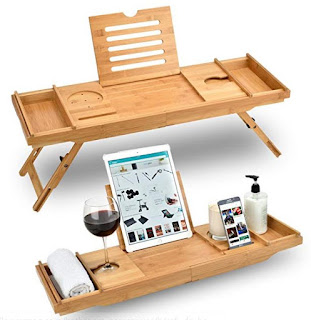 Hmmmm I wonder how long he will sit still in his chair?

Posted by KarenInTheWoods at 7:43 PM