It's That Time of Year to Say Goodbye to the Yard

In comes the frost
and out goes the flowers.

The temps in Wisconsin have finally gotten down below the 32 degree mark at night. That of course means one thing. All of our flowers are done for.  We covered them up the first few nights of low temps to get a bit more life out of the blooms.  But now it is time.

They're full of wilting heads and shriveling leaves hanging down off of the window boxes. It looks kind of sad.  The flower gardens are all withering stalks of mushy vegetation and brown curled up drying leaves.

Sunday was crisp and cold, and the winds of Saturday had also died down.  Steve and I grabbed our work gloves, the wheel barrow, the little red wagon and a pile of large garbage leaf bags. The dogs ran around the back yard, barking their fool heads off at the neighbors who were also getting their yard work done.  (they think the neighbors are "burrrglurrz" and need to warn us of their presence).  After a few minutes of that noise, we put them inside to watch us from the windows instead.

They watched us pull out the flowers from the window boxes... which really gave us a lot of enjoyment this summer.  The flowers had grown so tall, they could be seen nicely from inside of the house as well as outside.  This is the side windowbox by the family room... where the dogs can look out from their little ottomans. 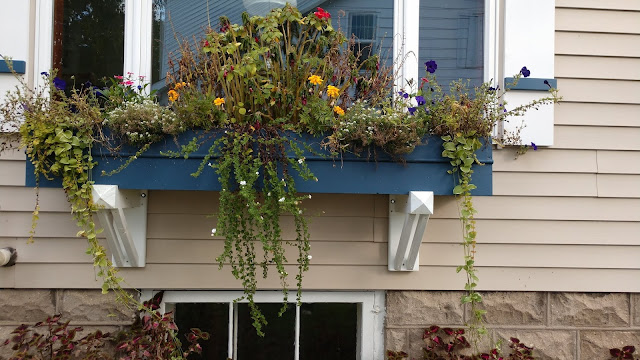 The front box had a few less blooms, but the greenery was still in pretty good shape.  Oh well, they all had to go! There was snow in the forecast.  I want these boxes put away for the winter, after Steve worked so hard to build them last spring. 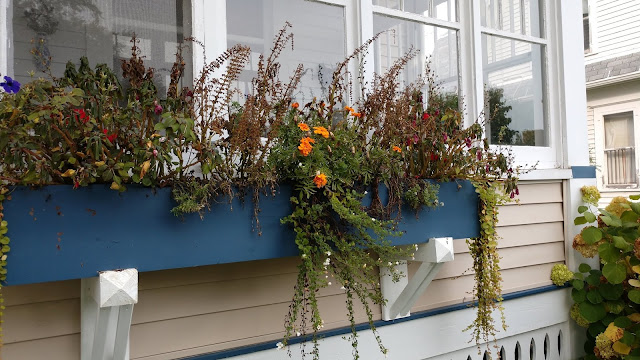 Steve pulled up the clumps of plants and they were so pot bound that it pulled out all of the soil in a perfect rectangle shape!  He had to actually break it up into sections to put it into the bags, after I dug off the pieces of styrofoam.  We had added those to the bottom to work as lightweight drainage instead of gravel.  We didn't want the styrofoam to go into the mulch recycling program at the city refuse yard. 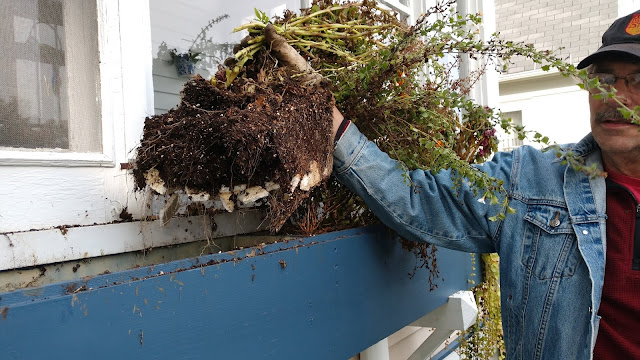 After we pulled off the boxes and stored them away in the garage, I had to wipe off all the leaf and blossom marks they left on the windows. I wasn't going to do ALL the windows of the house, just the ones that I could reach. 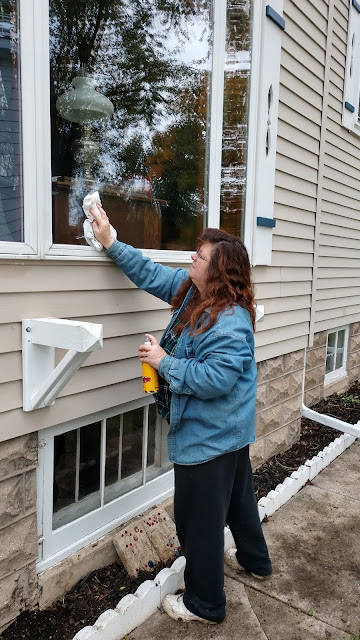 It made me smile to think of old Mr. George Kopf Sr., who used to do the windows on the house too.  I was given a picture of him working on the same section of the house 45 years before.  That was when it was three separate sash windows, which had been replaced with the more modern one years later.  Someday if I find three old sash windows, I would like to restore them back to original too. 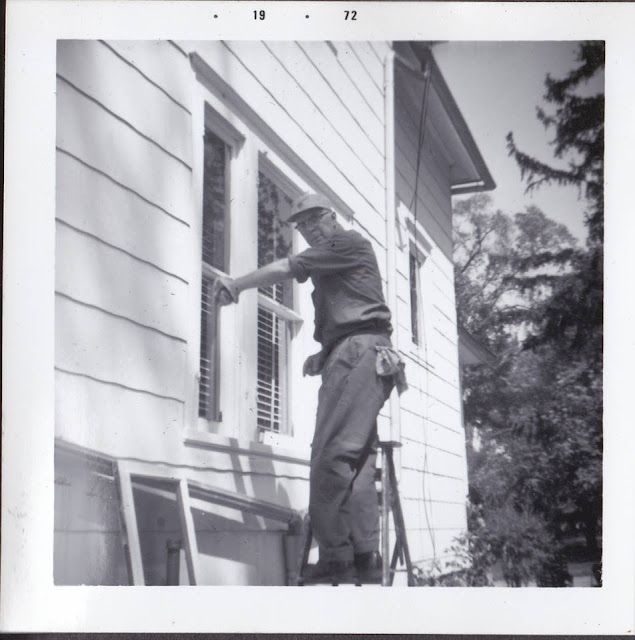 We cleared out the pots of flowers as well.  On each side of the garage door this year I had planted these new pedestal planters I got from Craigslist.  These geraniums and spikes grew like crazy and I added some ivy.  Whew... did they ever get pot bound!  The roots were even growing out the bottom holes of the planters and dangling 6 inches below the pots! 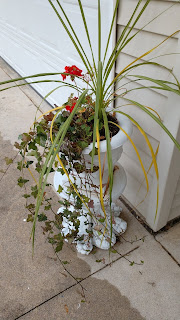 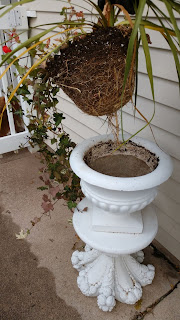 Up in the front, the same story--- The two cement planters on the stoop were pot bound so tight that there wasn't any dirt left in the pots!   Guess next year I should plant fewer plants per pot? 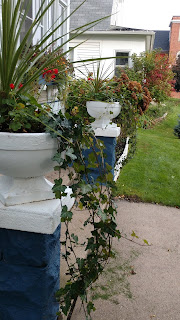 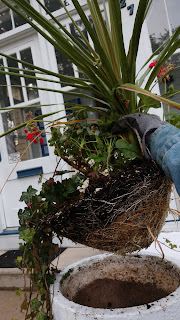 Even though we had frost, there were a few brave clematis blooms poking out their pretty heads yet for a bit of sunshine.  Now I clipped those plants back to about 3 feet tall so they could have some old growth stalks to help support the new shoots next year.   This is a new plant I bought this year that took off and grew quite well.  I love the delicate pale blooms with the pretty purple thin lines of accents.   I hope it survives the winter? 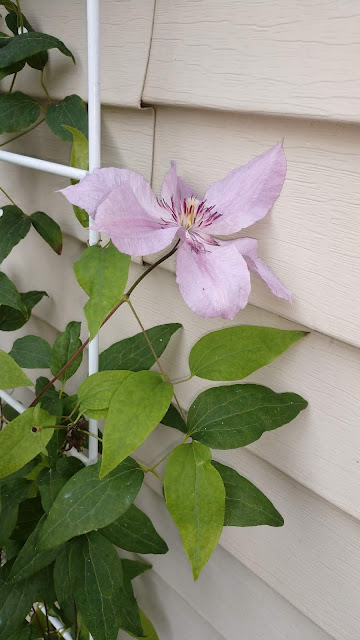 The vintage old purple ones are as tall as the top of the windows on the front porch.   I love these clematis because they give shade from the southern facing sunshine into the front porch, plus you can see the purple blooms from inside the windows. It keeps growing back bigger and bigger each year. 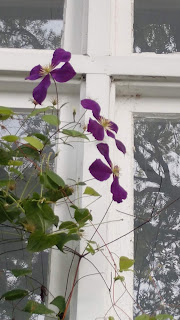 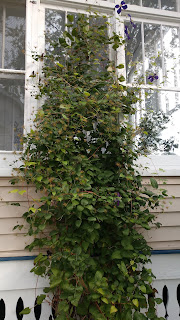 This is the same original old plant that appears in photos from 1947 that the Kopf family shared with us.  This is George Kopf Jr., the son of the man who appears in the old photo above.  You can see the clematis plant to the left corner in the pic below of his 8th grade graduation.  We "re-created" his childhood photo when he came to visit the house in August. 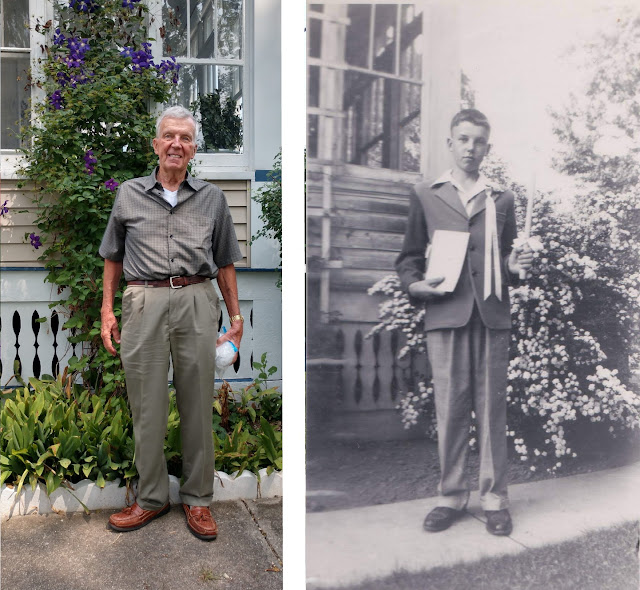 It was time to hoist up my little Dutch girl and boy into the red wagon and haul them off to the garage.  They are very heavy cement and take a lot of "oomph" to move them. I suppose they could winter outside, but I would like the paint to last and not have to redo them every year.  I nabbed them cheap from a rummage sale last fall, (I think 10 bucks) and they graced my front flower bed all summer long.  Now they can sleep in the wagon all winter... hibernation? 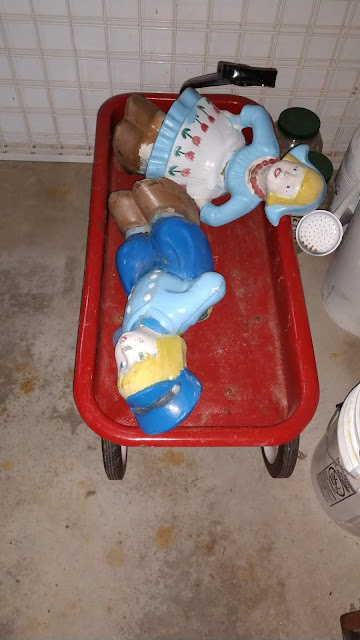 While we were working on the flower beds, pulling up clumps of coleus and begonias, this little guy was hiding out by the downspout in the corner.  We know he lives under our front porch.  As long as he doesn't nibble on my tomato plants in the summer, I don't mind him hiding out.  He is almost grown now. His mom used to live under the front porch as well, and I have a feeling he was born here.   Once in a while the dogs give him a good chase, but he easily flings himself through the fence spindles and gets away to a safer spot. 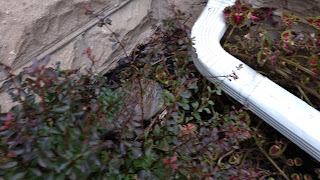 AHHHHHH my precious hydrangeas!   These are started from small slips and shoots from my friend Charlotte back in our old town of Oconto.  They have multiplied and flourished well here in Chilton.  I dug up some last spring to move to another spot in the yard and they have survived as well.  Next spring we are going to share some with Steve's brother Pete who is landscaping his new yard at his newly built house.  For now, the creamy white blooms have all gone rusty brown. I snipped off some of the heads and sprayed them with clear acrylic spray to preserve them in a vase in the house.  The rest of the plants we snipped off about 3 feet tall with the electric hedgetrimmer for the winter. 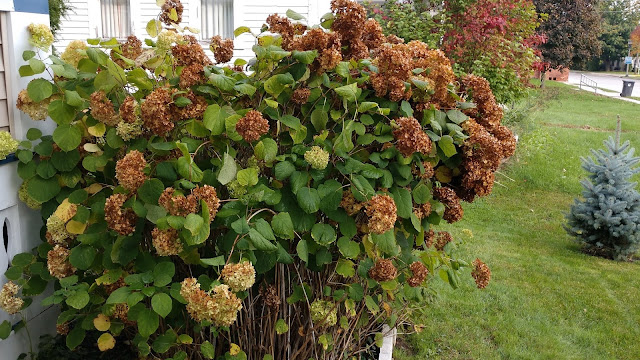 Steve started to load up the back of the Tracker after I spread a tarp down on the floor.  We put in all of the coleus plants we pulled up. It's easier to clean them up in the fall than in spring dealing with mushy old vegetation. I learned the hard way last spring when I breathed in some of the rotting old leaves and got soooo sick! I ended up pneumonia in both lungs and it took three separate courses of antibiotics to rid myself of the illness.  So this year, all the vegetation gets pulled in the fall so I am not messing with moldy old leaves next spring. 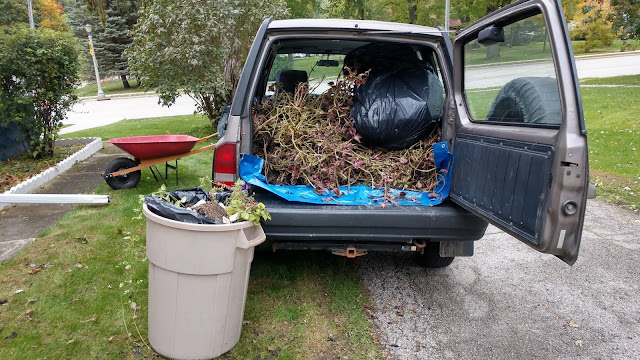 We chopped off the hosta plants at ground level and bagged up the large flat leaves, as well as the blossoms and clippings from the rest of the yard. We had six big bags to haul besides all of the loose stuff in the Tracker. Whew! 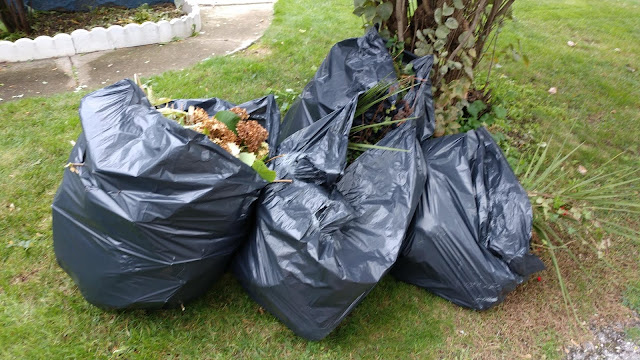 Our city has a big refuse area to bring yard waste.  They let you pile the loose stuff in one area and then the tree branches in another. They grind it all up and make piles of mulch for next year.  It is used in the local parks and also available to the residents to take for their own gardens and yards.  How nice is that?   (someone tossed SILK flowers in the pile... we pulled them down to the side to separate them from the real stuff... geesh) 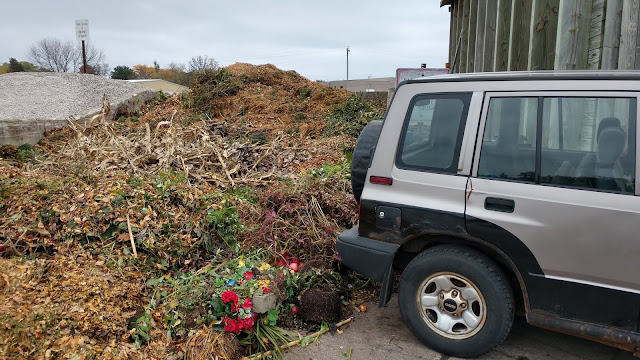 These are all of the rows of tree branches that are collected in large rows as people unload them.  The city crews run these through a chipper device to make wood chips for next spring. 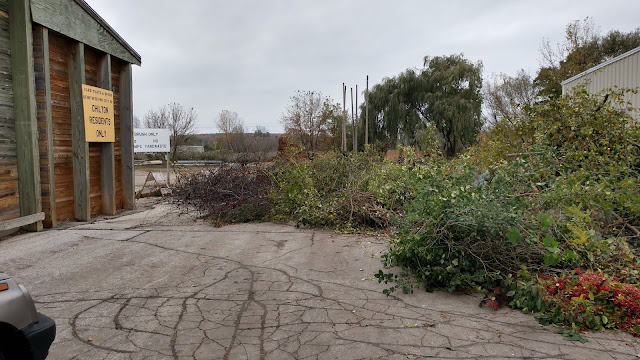 After we were done with all of that, it was time to come home and relax in our chairs and take a break!   I grabbed ice water and Steve did a glass of his favorite limeade as we got comfy in our livingroom.  Whew... what a day. 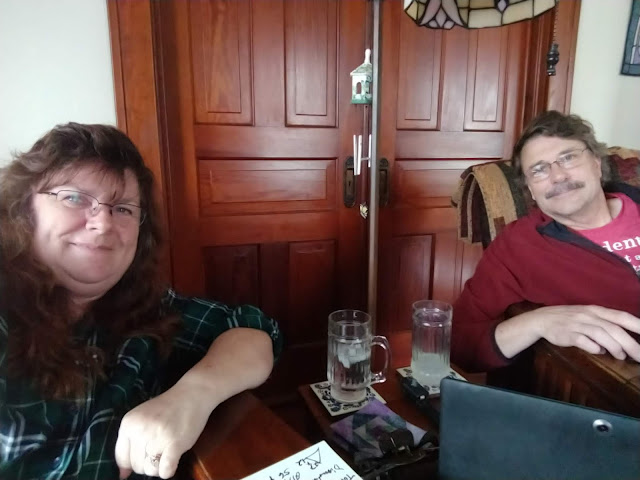 Steve found something on Craigslist and we had to jump back up and head out to go get something for my "early birthday present".  Here we go with another project???

More on that in my next blog!

Posted by KarenInTheWoods at 8:57 PM