Finally starting to feel better. I think we have most of my meds sorted out and we will figure it out. Biopsies came back benign!  I go back again on Monday for more tests and I think things are going to be okay.

We were suffering through all this heat and humidity last week in Wisconsin which made me feel like a slug. Fortunately, today is absolutely beautiful. The temperatures are low 70s and the humidity has dropped. We will be like this for a couple days. This is what summer should be like!

Steve decided it would be a good morning to work on the motor home. A while back he had removed the struts from our king size bed. They were no longer working and he knew he needed to get bigger ones to withstand the heavier weight of the mattress we put in there. The mattress is about 90 to 100 pounds. Add to that the actual wooden deck platform that it sets on with steel framing over the engine compartment.  So we figured it's about 150 pounds and the old struts just gave out a few years ago.

The struts that had been on there were too short and would not allow you full access underneath the bed. Because we work so often on the engine, we just got used to lifting the bed (minus any struts) up together as a team.  We were putting a heavy prop pole in place to hold it open. I was never comfortable with that pole and wished Steve would put some better struts on the bed. It had been something he kept putting off and putting off,  and never quite taking the time to order heavy struts that were longer than the original ones. We wanted the bed to open up as wide as possible, of course.

Finally, last week, Steve was making up a list of things he wanted to do to the motorhome. I insisted that the top item on the list would be to order some struts

We used the same company that we had ordered the lighter-weight door struts from. We measured up what we needed plus we figured a little bit more. $19.95 each, 94 cents each for the four ball sockets, plus shipping. Each one is rated for 160 pounds, so that is 320 pounds total. Here is what we got:

The struts came in the mail yesterday from UPS. So this morning was the perfect time to go out there and figure it out. The temps were down and it was comfortable to work inside the motorhome. (after I made my black raspberry jam... more about that later)

We lifted the bed up and put it on the prop pole. Then Steve replaced the two little ball socket pieces with new ones on the lower brackets. And he set the new struts into place on the bottom box surrounding the engine compartment.

Then we had to figure out where to put the ball sockets for the top struts with some careful measuring --- because these were longer then what had originally been in the motorhome.

We measured backwards from the lip edge of the box for the bottom, We then added to that the compressed length measurement of the strut. We transferred that measurement on the top lid, also measuring from the end of the box. Now we knew the compressed length and added just a teeny bit more for comfort. Better to be a little too long than a little too short and crush the strut or destroy it.

He put in the new ball socket pieces on the top lid after drilling holes and we measured one more time, just to be sure.

Here he is snapping the strut into place. It's really easy to just snap them on the ball sockets and they latch into place. To remove them you have to actually use a skinny little screwdriver and release a retaining clip to get them off again. 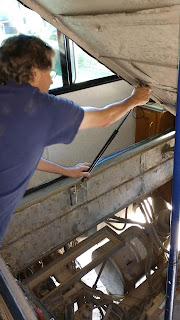 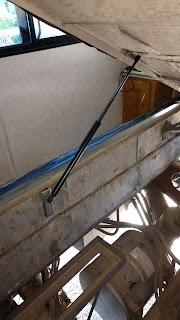 Then we did the other side...
And tested it carefully to be sure the struts
were correctly mounted in the right spots. 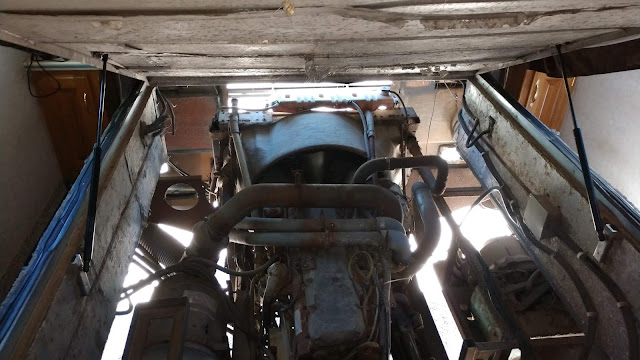 Voila! Here it is fully operational:

I am so glad we were able to do that ourselves!


The other motor home modification he is working on was the front dash AC. The last time we used the motorhome, the dash AC would not kick on.  Steve put on his manifold gauges and pressure vacuum tank to check the freon levels. The freon pressure is fine but the compressor wasn't kicking in. It turns out it wasn't the compressor, instead, it was the fan! Upon further examination, Steve discovered that the magnets were froze up inside the fan and it was not turning anymore! Well, it is 23 years old so I suppose some things do wear out. We don't use the dash air that often, which probably also lead to its demise.

He pulled the fan out and is ordering another one for around $30. We aren't going anywhere in the next week or so, so it's okay to have that part non-operational. 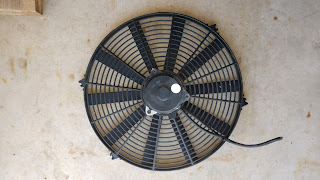 He also used his manifold gauges and vacuum pump on both our car and our Tracker. Now both of them are up to snuff with proper AC cooling at the vents in the 35-40 degree range!  The local service station wanted $150+ for each vehicle to do it for us.  Glad Steve is handy and has these tools to do it ourselves.  That would have been over $300 total service bills for the Tracker and car... 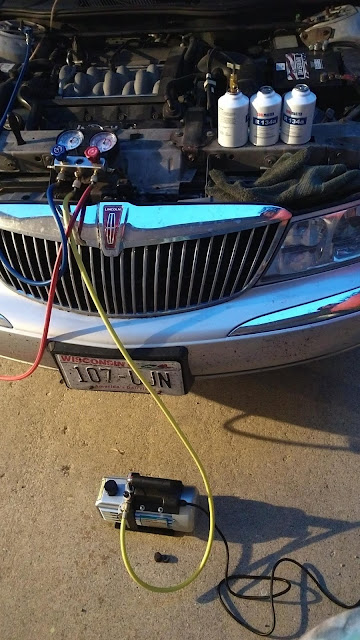 We have lived in this home now for our 6th summer. The past five summers we have never had any black raspberry bush up in the front corner of our fence.  This spring we noticed raspberry bushes growing so we helped prop them up and let them drape over the fence to give them somewhere to grow. Imagine our delight as the berries ripened and we saw they were black raspberries!! 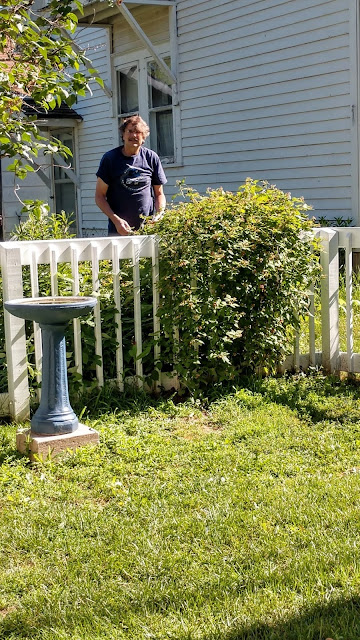 I imagine that some bird flying overhead either dropped a berry here that went to seed...
or it came out of some bird poop!!!???

Either way, we now have a nice thick lush black raspberry patch! 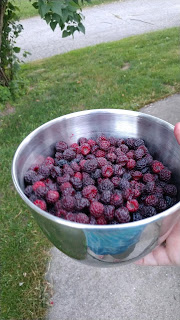 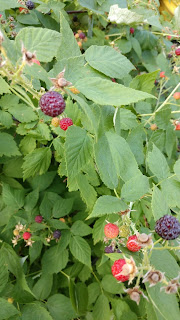 Last week we picked enough to do a double batch of uncooked freezer jam. It was way too hot to do the cooked type over the stove.  This is good, but it takes up too much room in our freezer. 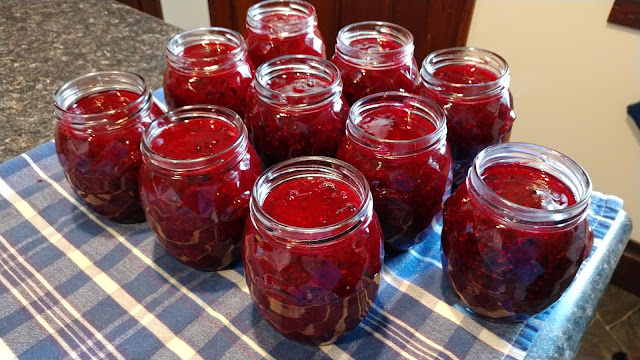 But this morning, since it was cool, we had enough to do a triple batch of regular cooked Black Raspberry Jam. Steve kept picking more berries while I started making the jam. 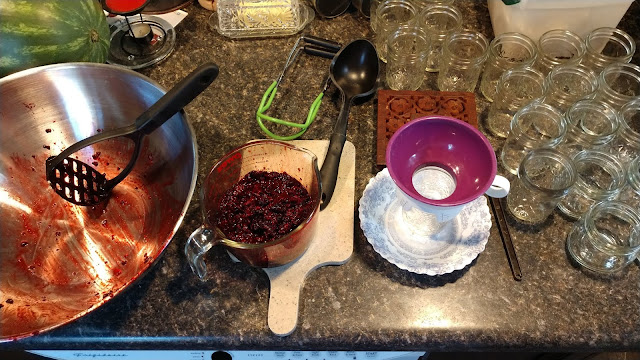 It was so nice to be able to use the canning kettle on the stove and have the kitchen a comfortable temperature to work on the jam. I love my old fashioned kitchen and having fun preserving foods like we used to do with my mom, when we were kids. 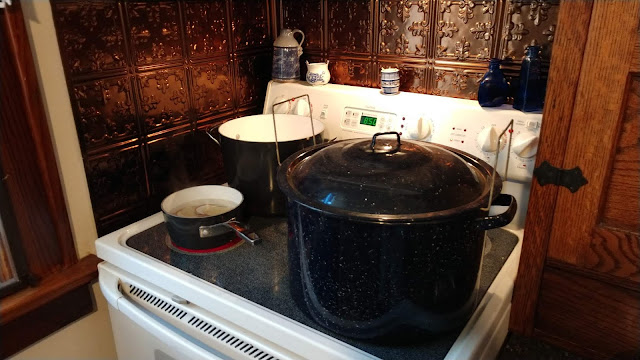 Here we are, 20 jars finished.
1 jar is in the fridge for Steve to use immediately. 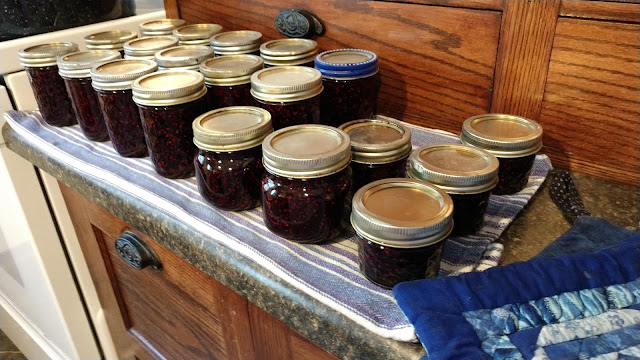 Other years, when it's too hot in the kitchen, I have Steve use our outdoor propane burner and I set up my canning kettle out there. But then it means carrying things in and out and in and out from the kitchen as I work on the jam indoors.

We also use the outdoor propane burner for other things. It was originally intended for deep fried turkey. We don't do those very often. But we do use it for canning, or if I want to simmer a stinky dye pot for spinning wool or yarn. The best use is for steaming Alaskan snow crab legs! It keeps the stink out of the house and we can use the very large kettle on the outdoor propane burner. 14 minutes and they are absolutely perfect. 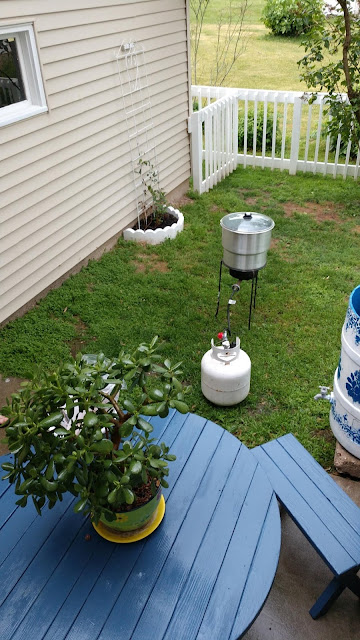 I wasn't feeling very good on our 21st anniversary last week, so instead we did our special meal of crab legs in the kettle this week on the 4th of July! 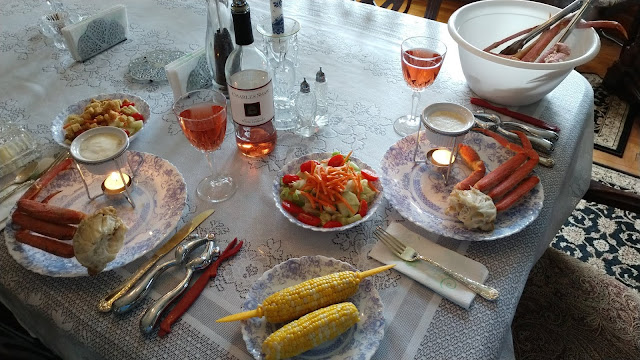 Posted by KarenInTheWoods at 1:28 PM