Getting a Facelift for Christmas!!!

Yes, I am getting a facelift for Christmas! And best of all, Steve wants it too...

Not surgery, silly readers, we are going to give a facelift to another room in what we fondly refer to as "Our Old House" which is our 1914 home.

See, most of your readers remember that we bought the house 5 years ago. The bathroom was not in the best of condition. It was the only room in the house that really wasn't original to the house date of construction anymore. 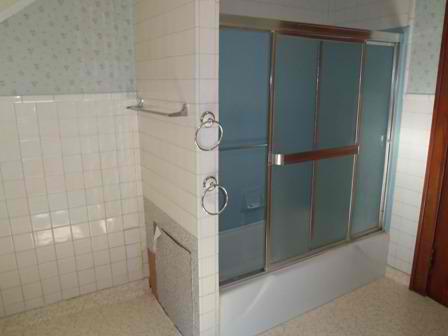 Those are not real tiles,
they are plastic glued on tiles from the 60's.... 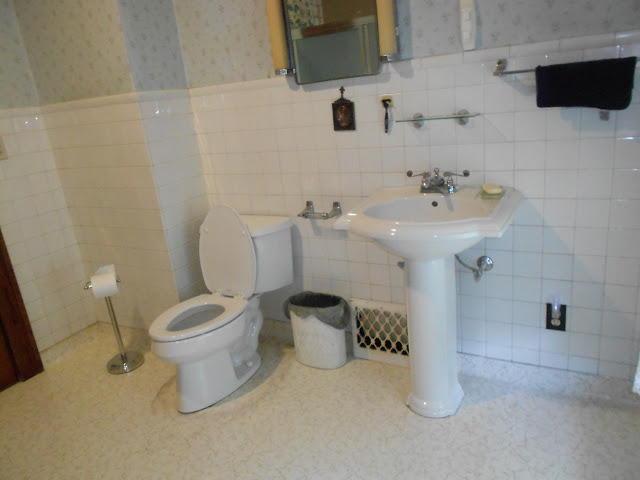 Keep in mind, the elderly people who had last lived in our home probably made these changes in the forties, fifties and sixties to the bathroom. After they passed away, we bought the home, unchanged, from their 3 daughters.  Nothing else was updated or changed over the years prior to our purchase.

We do cherish the originality of our home with all of the gorgeous woodwork, the hardwood floors, and the overall structure and construction of the house. It was just the out of sync bathroom that needed to be addressed...

In striving to make it more pleasant than original, we also had to deal with the evidence of a leaking toilet over time, and removing a turquoise bathtub and shower enclosure that had seen better days. 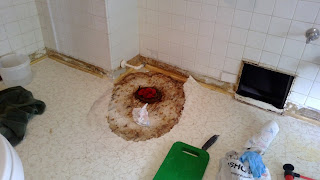 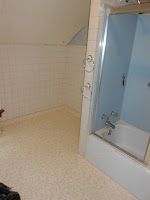 The ceiling was in rough shape as well, there was some evidence of a past roof leak (that have been repaired), and over the tub it was falling down due to not having a bathroom vent installed.  There were ugly acoustical square tiles that had been attached to the ceiling. The upper walls were adorned with patterned printed wallpaper and the lower walls are covered in plastic square tiles that are just glued on.  It was a mix-mux of patterns highlighted by the gold metallic and white linoleum flooring that was curved up the walls as faux baseboards??

This is how it looked when we bought the house: 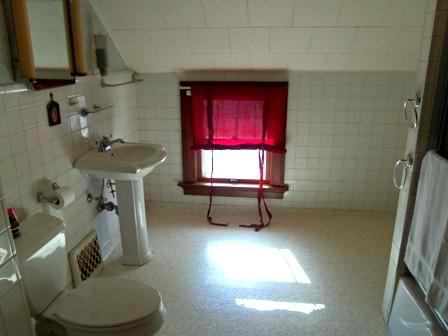 Notice in the pic above of the crazy medicine cabinet had those two vertical fluorescent tube lights that drove me nuts. Not only did they flicker on and off to get started, but the plastic housing covers were all yellowed and cracked. We removed those and later added two beautiful wall sconces instead.

After repairing the plumbing and the sub floor boards, we replaced the flooring with something neutral.  With  all of the patterns to the wallpaper and tiles, we didn't need another pattern on the floor.  So we chose a soft creamy neutral ombre sheet vinyl to cover the floors with (after fixing the sub floors and plumbing and then using leveling compound). 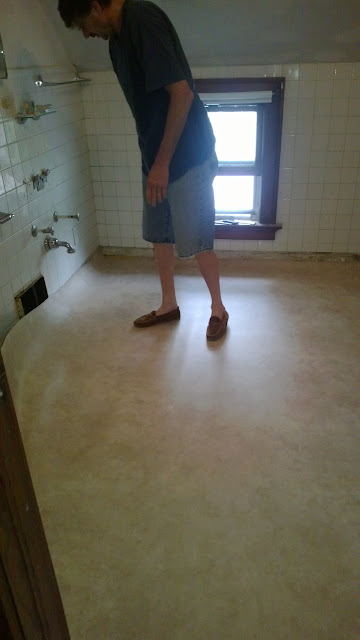 We cut down the wall between the tub/shower enclosure and the open space behind it.  We were planning to use this space for a whole new configuration. 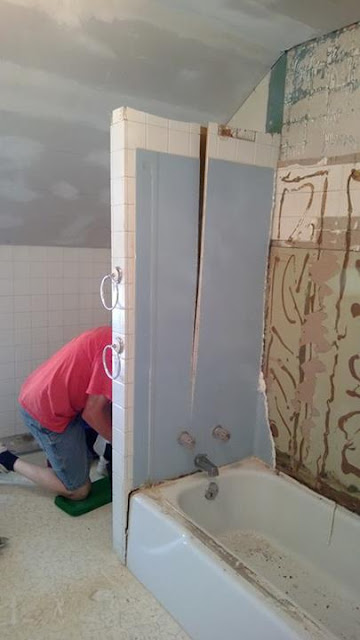 Instead of the crazy outdated bathtub shower enclosure, we pulled that old cast iron tub out which was a HUGE project.  We had to bust it in half with a sledgehammer to haul it out in two pieces.  Steve and I slid each half down the staircase (with three turns!) out the front door and porch, and onto a tarp to drag it to the garage for the metal scrappers to pick up. 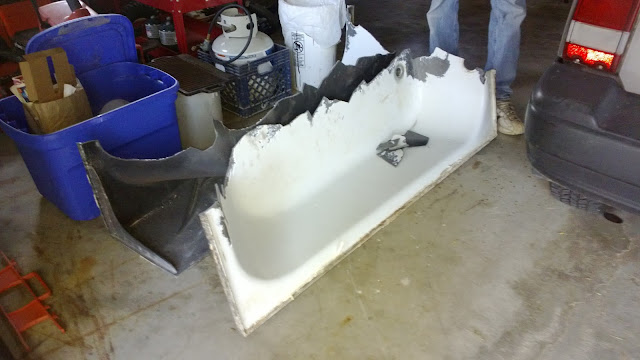 We pulled off the wallpaper, yanked down the ceiling tiles and did new sheetrock all over the ceiling and upper walls. We also installed a new bathroom fan/light fixture that had an old fashioned appearance with the fan hidden up under the light shade.

We put in a more simple white plain looking bathtub and a separate stand up shower stall tucked away behind the door. It was the best of both worlds, because I enjoy the baths and Steve enjoys the showers ---- he likes a separate walk-in stall like we had in our last home. 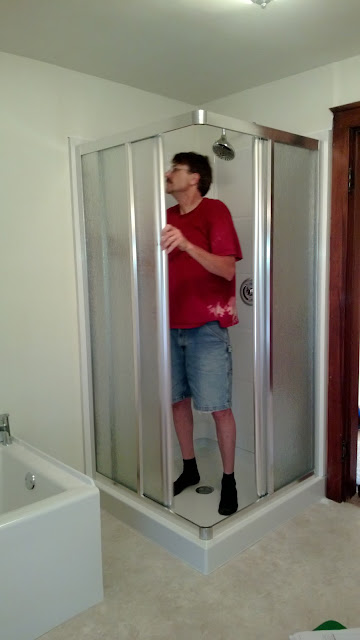 The toilet and the sink had been more recently replaced by the previous owners and those were of good quality. We kept those 5 years ago when we did the other work in our bathroom.

Don't get me wrong, we love our beautiful old house. But we want to restore things back to what it would have been like in 1914 and erase stuff from the forties and the fifties and the sixties if we can.


All of that work you see in the pics above was being completed 5 years ago when we first bought the house. It was all well and good and we liked what we did to improve the bathroom.

Those crazy plastic tiles bug me!!!!! They are not attractive to my eyes, and they are really a creamy faded non-white with brown speckles that never seem to be clean. Not to mention, the cracks in between aren't really grouted, the tiles are just glued into place. Of which those tiles keep falling off and we have to keep gluing them back into place. arrgghhh!!! 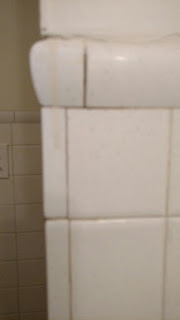 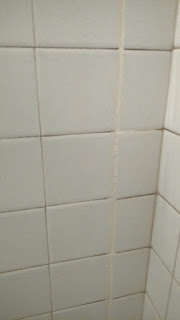 As we undertake this new facelift project, these are our "BEFORE" pics of the bathroom. This is how it presently looks right now. 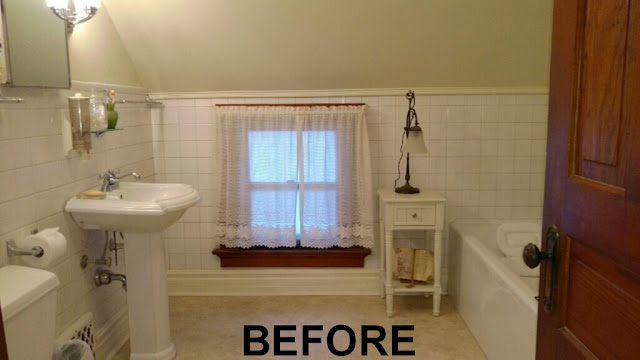 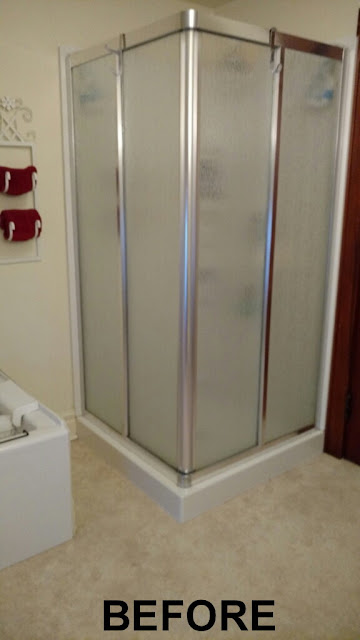 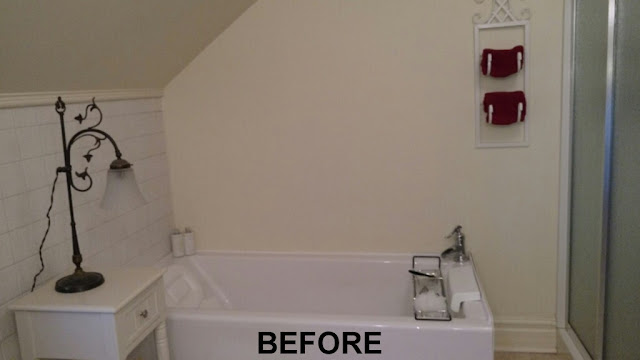 (ps the antique lamp cord is not plugged in, it's just for looks) 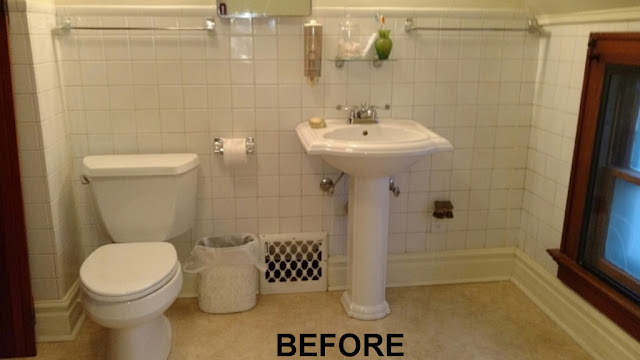 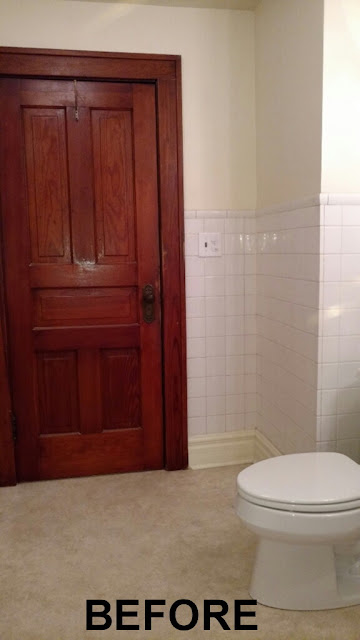 Steve and I were having a tough time finding ideas of what to get each other for Christmas. So we decided we would jointly work on this bathroom together and pick up all of the materials as our Christmas Presents to each other.  Besides, we like working on projects together, so that makes it extra special fun.

Our first stop last night was to the Restore for Habitat for Humanity, just in case they had what we were looking for.  I used to love going into the Restores, but lately they seem to be so filled up with furniture and not actually leftover building materials. Over half of the display floor in the Appleton and Fond du Lac Restores is covered with discarded couches and chairs and crazy fiberboard cheap bedroom dressers and headboards. I think people are using them as a Dumping Ground of Junk rather than a place for contractors and home fix-it people to donate their leftover or reusable construction materials.

We then drove to three different home improvement stores to get some ideas.

Here is a hint: This is our lovely linen closet in the hallway. 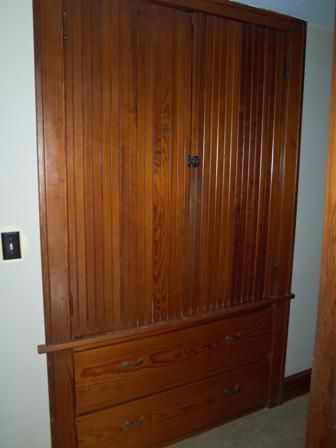 Steve removed a door to set in the bathroom to get an idea.... 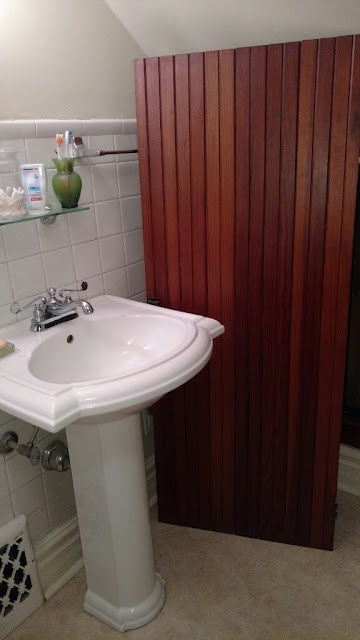 I guess now you'll have to come back here to see what we are up to.

Check back as my face lift goes under the knife ----- errrrrr saw?


Posted by KarenInTheWoods at 9:31 AM