Yesterday, I was going to write a fun blog of stuff. But once I saw the news, my heart was so sad.  What senseless tragedy in Las Vegas. It was with a heavy sense of foreboding that this is a "new normal".  It is time for reflection and action.

I usually do not get political on my blog.  But I will here today.

I grew up in a family of hunters, with guns and bows.  Guns were in our house. We were taught to respect them.  Bullets were in the house (not in the guns).  We had 6 kids growing up in that house, and we all knew what guns were for.  Hunting.  We ate the venison and the partridge. It added to the meals in our house when times were lean.  My brothers and sister still fill their freezers for the winter with venison, as well as fish from the lakes.

This senseless slaughter of mankind in the news are done by guns that are not for hunting. They are for war.  They should only be used by active soldiers and owned by the government.  There is no place for these killing war guns in our general public.  There needs to be gun control on these types of weapons. Not all guns, not hunting guns.  But killing war machines, yes, control.  Watch those people affected on the news, Then think about it.

Yesterday we had a breakthrough with our neurotic little rescue dog, Binney.  See, since we got her 2+ years ago, she has never, ever wanted to go in small rooms.  She avoids the downstairs half bath and will never go in there.  We were told that the hoarder who had the dogs would sometimes shut them into closets, no wonder.  Out of the blue, yesterday, when letting them in from running around the yard, that silly little girl dashed into the house. Surprisingly, she made a right turn at the doorway and ran in and twirled around in the half bath, barking her silly head off!!!

She dashed in and out 3 times.
So I told her to sit and gave her a treat...
Finney too! 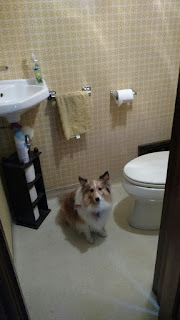 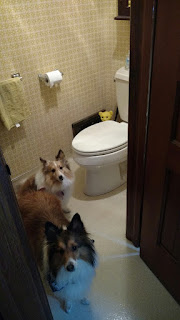 It's the Little Things that Mean a Lot...
She keeps getting more social,
and she even played with a toy in FRONT of us last night.
(she usually plays in secret,
hiding around a corner to chew on one or make it squeak)

On Sunday, I posted this big plant on the Facebook buy sell trade pages.  It needed a new home as I didn't have a spot for it inside to winter it over.  So I posted it for anyone who would like could come and get it. Where I had put it last winter, I now have this marble etagere table and antique lamp. (FREE out of the trash on bulky item pickup day last spring) I posted that anyone who could use this plant to please come and get it. 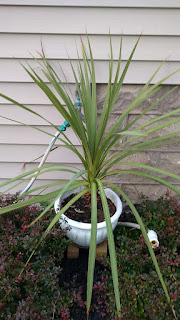 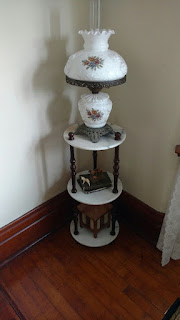 A couple came by to get it. She said she LOVES plants and would take good care of it. She said she works in an assisted living facility, and sometimes splits up her own houseplants into smaller ones to bring into work for the resident's rooms.  How sweet is that? So, my plant found a new home.  Awwwww


There is a new business in our small town of Chilton. It's called Cupcake Celebration and is located on Main St.   We stopped by for a treat, and we were very pleased! 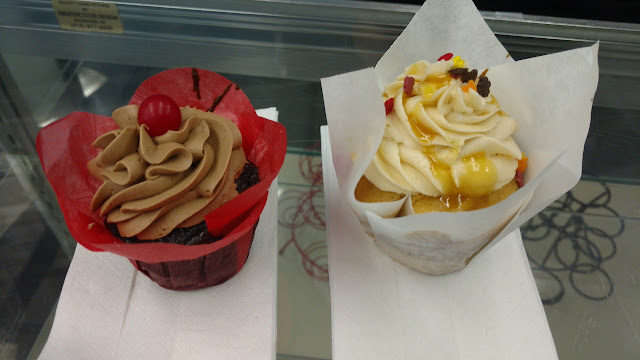 Mine was black forest cherry and Steve's was a beer flavor, I kid you not!  Both were totally delicious and we enjoyed our treat after dinner.

It is so nice to see new businesses moving into our little town.  We have some vacant buildings along Main St. that really need little specialty shops like this. Welcome to the neighborhood!

They are also featured in the Appleton Monthly Magazine for Oct. 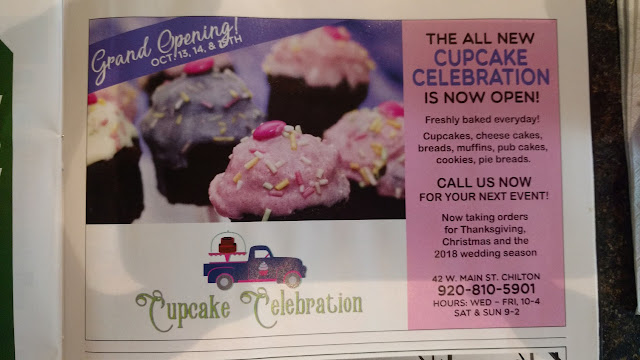 With the cooler autumn weather, it is very nice and pleasant temps on the enclosed front porch in our home.  I wheeled my Tools of the Trade table loom (clamped to a bench with C clamps and casters to make it easy to move around)   The sunshine was beaming in through the climbing clematis vines outside the south window.  Sitting in the old rocking chair from the Baldock Family, I spent a joyful afternoon preparing my loom for weaving. 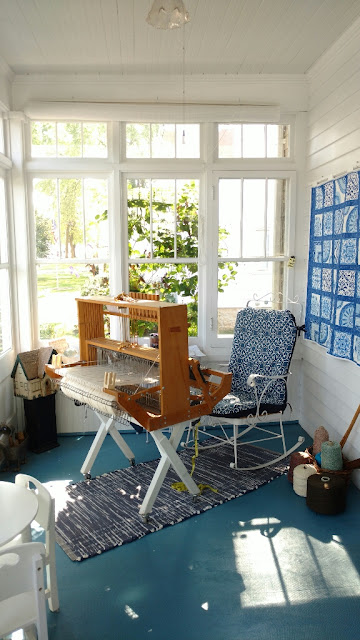 Steve was gone to work driving his Old Fart Party Bus, so I cranked up some old 70's music (John Denver, The Carpenters, Jim Croce, Neil Diamond, The Partridge Family and Bread). The dogs curled up on the couch on the other side of the porch, and we had a pleasant afternoon.  Here is the other half of the front porch. Perfect for taking an afternoon nap as well. (which we did) 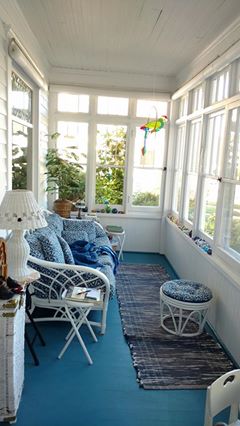 It is quite a process to thread up a loom, especially when it has 8 harnesses for doing intricate patterns. I had done a batch of autumn towels a few years ago, and wanted to do another batch. Here is what I did before in various fall colors, each with a different pattern: 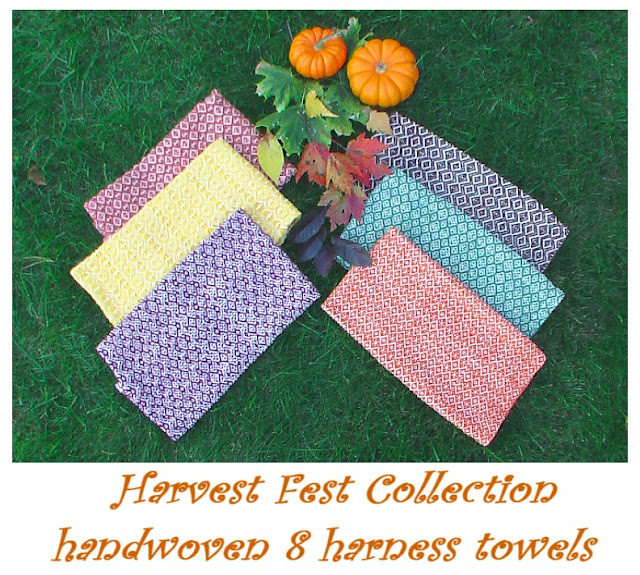 I took out one of my favorite books by Carol Strickler, called 8 Shaft Patterns and chose a threading that will allow multiple patterns to be woven from one threading.  The threading I chose is on the right hand column, I can weave all five patterns in that column into five different towels. 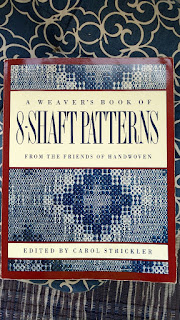 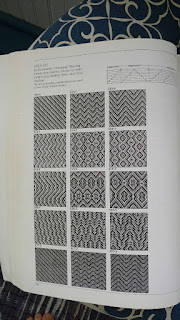 There is something soooo exciting about a finely wound warp with even tension and perfect spacing.  I tell weaving people that it makes my heart go pitter pat!  The little funny blocks are from the grandkids' building blocks. I am using them as spacers to hold up my floating selvages for a twill weave. 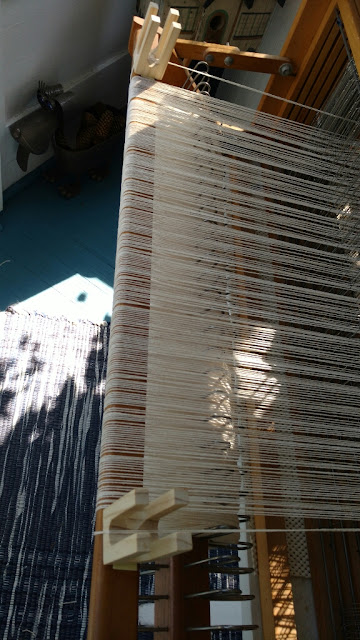 As the sunshine beamed into the porch, I started weaving the first towel. This one is in brown, just right for autumn.  These are very thick towels, perfect for a bread cloth in a basket, or a nicely padded towel to set hand washed glasses on to dry that don't go in the dishwasher.  They absorb spills fast and wash up wonderfully. 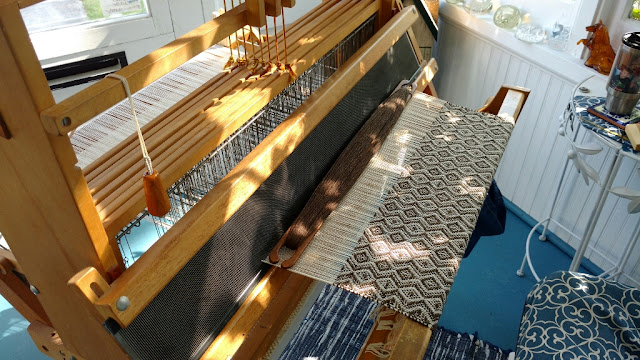 I love a thick thirsty towel of all cotton.  You don't get towels like that at Walmart or Target, that is for sure. The weave structure is woven a bit loose on the loom, as it will shrink up once it is washed for the first time.  Then the weft (crosswise) and warp (lengthwise) will snug up together into a nice thick towel. 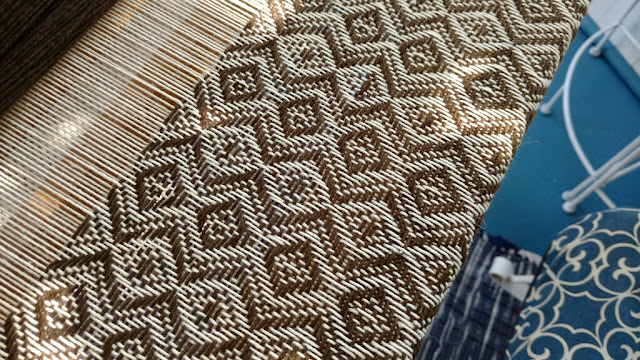 Using 8 harnesses is a trick and a bit complicated.  I can whiz through the treadling sequence after weaving a few inches, committing it to memory. Then I can just fly along, lost in my work, flipping the levers, lifting the appropriate harnesses and placing the weft yarn into each row in the correct order.  It is soothing and relaxing. Time can fly by, as well as the inches growing under my hands onto the finished cloth beam.  I can weave 3 or 4 towels in a row, separating them with an odd colored thread.  Once finished, I can cut them all free, and hem the edges on the sewing machine before washing them.

This is the "tie up and treadling sequence" for 4 types with this tie up for my weaving blog readers....  I use Fiberworks PCW computer program to graph out my weaving plans and use it for heddle counts per harness for threading.

It is now Tuesday morning.  The national news is on with such sad reports of people in pain, people in the hospital, people losing loved ones.  So sad.   When will this end?


Posted by KarenInTheWoods at 8:53 AM