Had a Health Scare and Our Pfundtner Security Team

Yesterday was a strange day....

Steveio called me from work about noon, saying he "felt weird" and "was forgetting stuff" ...  He sounded strange and it's not normal for him to even call me at all.  I knew something was up. Then his phone kept dropping signal at the park, and I could not get a straight story between his randomness and the phone cutting out. ARGGHHH!!!  He said he kept forgetting things.  A co-worker had to tell him the same thing five different times and Steve could not remember what it was.  I tried calling him back and get more details, but the phone kept cutting out.  I finally gave up and called his boss in the office to check on him.

It turns out that Steve had been cutting down trees with a crew, and he was doing the "grunt" part of hefting the cut trunk pieces into the bucket scoop thing.  The YOUNG guys were doing the non-strenuous parts!  That's my Steveio.   Geeesh.... with the heat and humidity plus he hadn't had a thing to drink since his morning coffee, no wonder he was feeling "off"!

The rangers checked him for signs of stroke.  Then they decided to take him into the Urgent Care....  where that doc then sent him to get a CT scan!  By now, I was waiting on pins and needles at home, hoping for any word by phone.  Finally they called and said he was heading in for CT and I should come now to be with him. He was 35 miles away.  I kept it under the speed limit, as I knew he was in good hands.  But of course my mind was zooming ahead a million miles a minute.

Well, Steve asked the technician if they found any squirrels up in his head.. .but she said no, not even a NUT!   LOL ... by now he was re-hydrated and feeling better.   They released him to me and said we needed to follow up with the doc in the morning.   Whew!!! I was thanking God all of the way home.

We came on home to find our workman we hired was here at the house...  workman?  workman? you say?   That can't be.... zoom zoom Pfundtners do all their own work on Our Old House!

A week ago or so our neighbor Diane was having some gutter work done, and this nice young man did a great job for her, and he came recommended. (she also knows his father!) 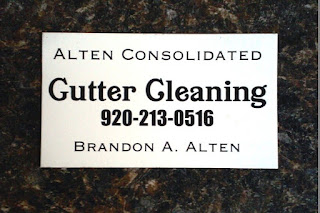 Well, we don't have a tall enough ladder to reach the top of our house.  But he does! There has been a missing piece of trim/edging/soffit whatever from the tallest gable on the south side of the house.  I talked to Brandon and got his card and asked him to come back when he had time to do a quick job.  I had all the parts and tools and white nails etc. ready for him to get to the job even if we were gone. 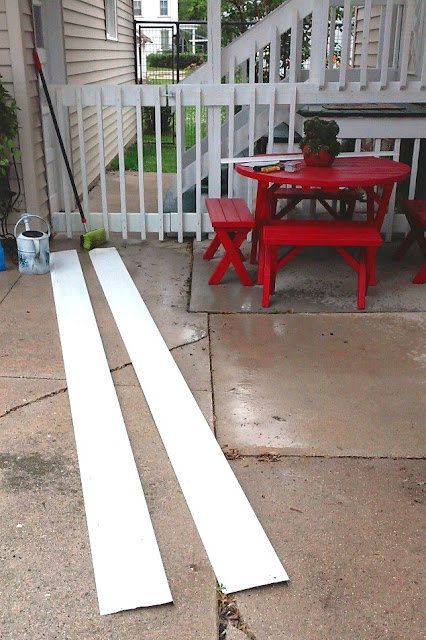 Here is where the piece of trim was missing.... 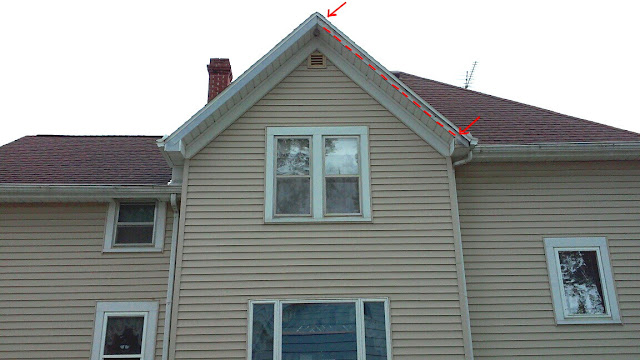 Brandon set up his gear and went right to work----
plus he knocked down the old wasp nest too! 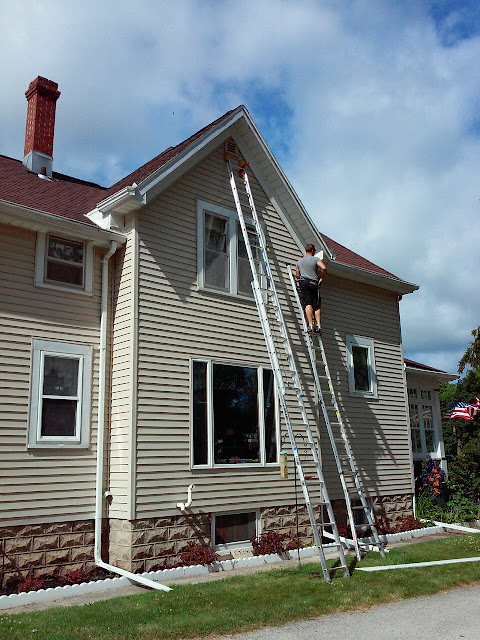 He carefully measured, double checked and measured again, and trimmed the metal to the exact size.  He was careful of the plants below, and made sure he was padded against the house siding where the ladders rested. 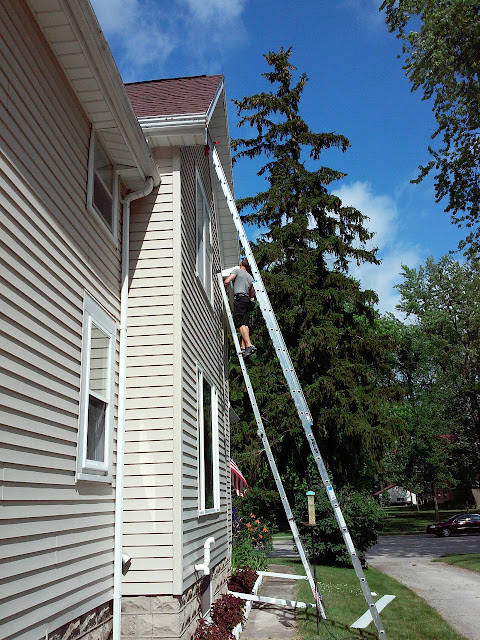 Having this guy going up and down on ladders
alongside of our house put the dogs in an absolute TIZZY!

This is our Pfundtner Security Team in action:


For those of you who don't want to click on the YouTube link, here are a few still shots of the Pfundtner Security Team doing what they do best---- 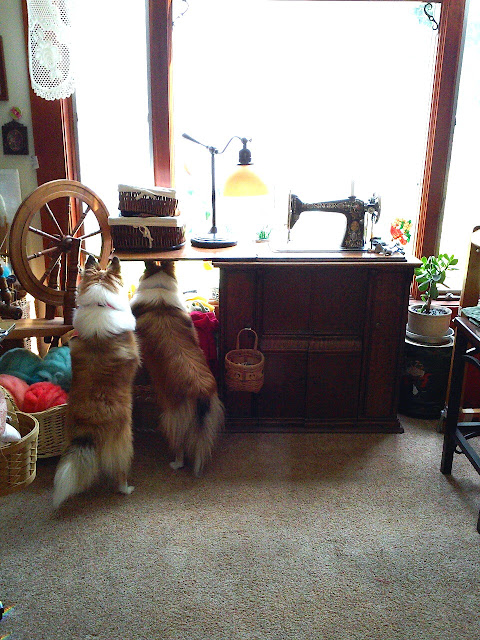 Finnegan on a little rest break...
in a basket of wool strips cut for weaving rugs! 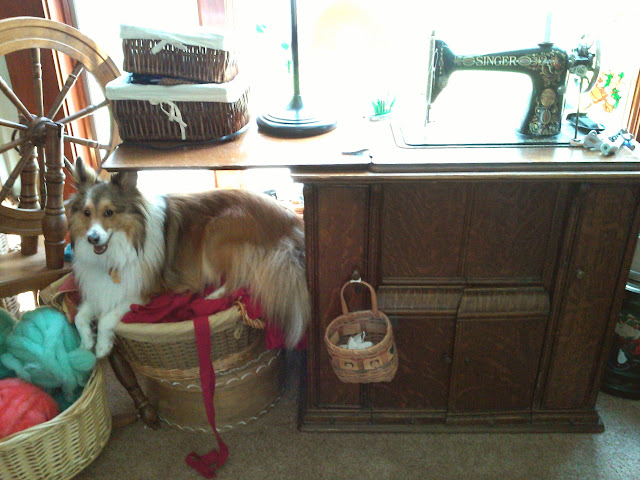 Re-positioning themselves for a better vantage point of view 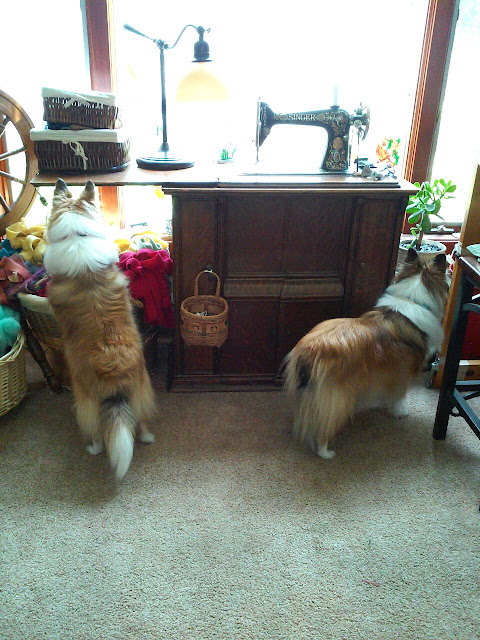 We also talked to him about putting in some gutter guards on the front porch (the rest of the house already has them) and he will be coming back soon to install them for us.  Here is a blog post of Steveio cleaning out the gutters up on the front porch:  http://kareninthewoods-kareninthewoods.blogspot.com/2015/06/thinking-about-couple-songs-tonight.html

Since Steve's recent face to face with the fact that he is aging and not able to do all the things that he did when he was 20....  it is a good thing to get the front porch gutters done so he doesn't have to go out on the roof again!

This morning we were up early and having our coffee on the front porch in the sunshine.  It is gonna be a GREAT day!  The temps are down, the humidity is down, the sun is shining and it's a gorgeous day.  And to top it all off... .Steveio is feeling better! The sunshine streaming in early in the morning is one of the sweetest times of the day. 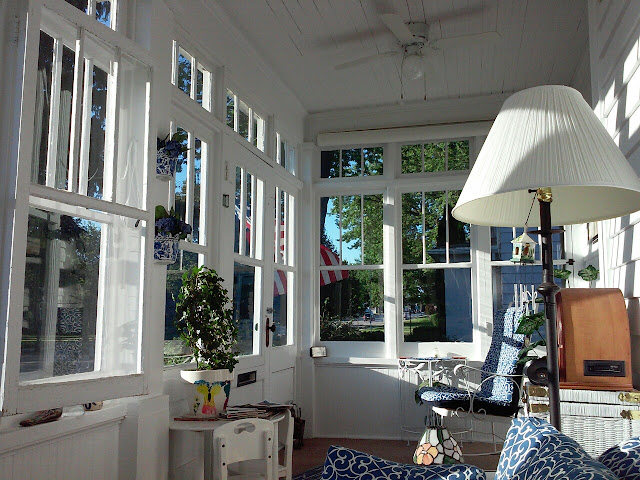 By 8:30 we were in at the doc, all is good, tests look okay and the doctor said that Steve is supposed to remember that he is NOT 20 anymore!!!! He was mostly likely off on his electrolytes and de-hydrated.  He needs to take it easier on the hot, humid days and be more careful of his exertion.

And
of course...
to drink MORE water!!

I did ask the doc to write up a note saying Steve had to retire now, just to bug his boss.  Heh heh.  But the doc said he would write up one for himself before he'd write one for Steve!  Steve is in better shape than he is.  LOL


And we are looking for special blessings and thoughts for our dear little granddaughter Allegra who is undergoing oral surgery this morning in Green Bay....  Be well, little stinker.  We love you!

Posted by KarenInTheWoods at 11:45 AM