A Week of Safari-ites Visits

As most of you blog readers know, we own a vintage Safari motorhome.  It's just about 20 years old, being manufactured in Oct 1995 and is considered a 1996.  That's pretty old!   We qualify for Collector Plates next time we register the rig in Wisconsin.

We know  quite a few folks who also have the same kind of rig.  They are no longer made by Safari but were bought out by Monoco and later bought out by Navistar.  All in all, we love our Safari motorhomes, no matter what year they are!   I gather and share information about them on various websites, Safari Yahoo groups and Safari Facebook groups.  Over the years I have met many nice owners of Safari motorhomes in our travels, both on the road and on the internet.

That brings me to this week....

Fellow Safari owners Paula and Mel Stuplich have a 1996 Sahara rig and we have camped together for many years now.  Last winter while out West, they met up with a cute couple, Conny and Jack who also have a Safari.  They clicked immediately and became friends.  Conny and Jack live in their motorhome fulltime.  After hearing Mel and Paula sharing so many stories and tales about us, Conny and Jack decided to come and visit us!

They were coming to Wisconsin to attend a Diesel Motorcoach Seminar and then a Safari Rally over by the Wisconsin Dells and Madison area.  They planned to get into Wisconsin a week early and were able to snag reservations at High Cliff State Park.  Mel and Paula watched the reservation list at ReserveAmerica and were able to get a cancellation in a site right behind them! What luck!  We watched for an electric site to open up on the ReserveAmerica website, but didn't get in.  Even if you work at a State Park, that doesn't give you an inside edge to get a campsite. It's all handled through the ReserveAmerica corporation. But because we live nearby, that was okay.  When the other Safari-ites got here, we just planned to drive back and forth to visit.  Besides.... Steve is at the park every day, so it was not a problem to be a "visitor" each evening and not actually camp by them.

They pulled on into their campsites....
Conny and Jack have this lovely 2000 Safari Serengeti: 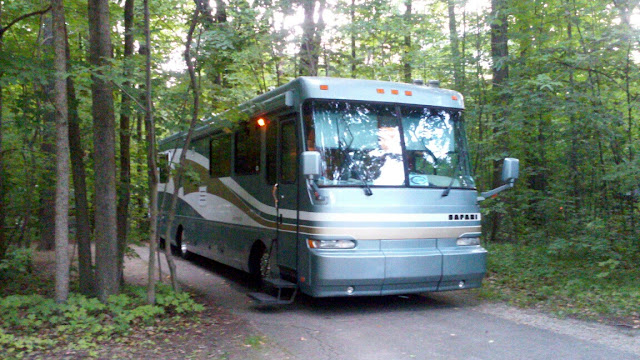 Mel and Paula have this 1996 Safari Sahara,
just look at that careful parking job!
When the awning rolled out, it perfectly settled into place around those trees! 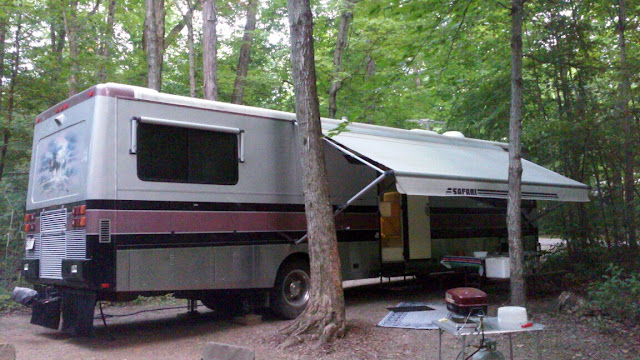 Safari Motorhomes are known for their interesting murals that are
handpainted and airbrushed on the back.
The Dame family works on them right at the factory.
Here is more info about the murals:
http://arcatapet.net/travel/murals.cfm

Conny and Jack's rig has a bobcat 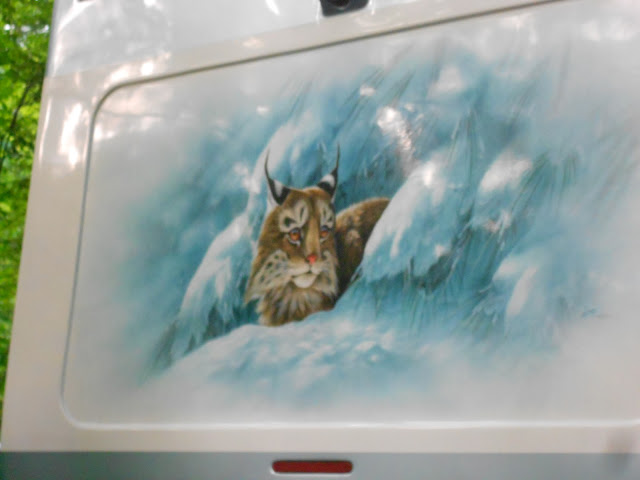 Mel and Paula's rig sports a herd of wild horses!
(I love theirs and wish it was on ours) 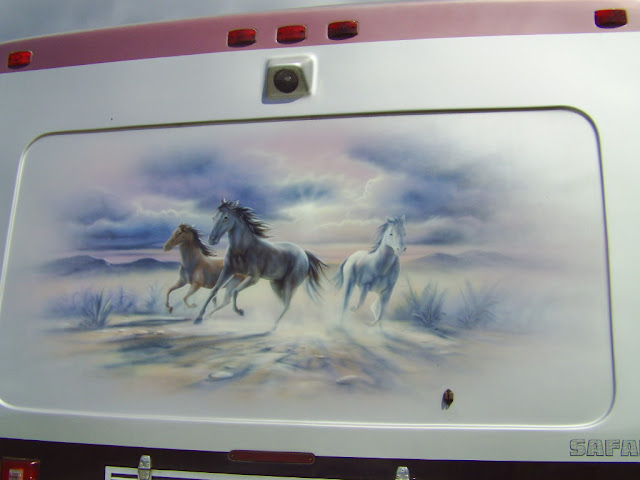 Our has two white tigers
Also, the Dame family would often hide a tiny animal on each mural,
ours being a tiny mouse! 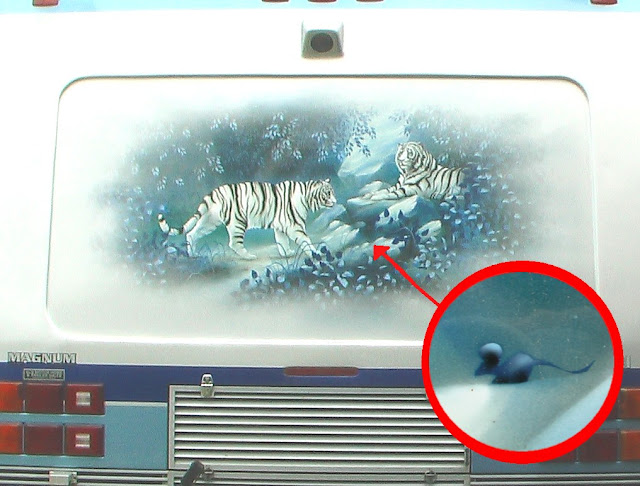 We finally got to meet the charming Conny and her fun-loving husband Jack.  They had a hectic drive over from Indiana on Sunday, the fifth of July.  Dead stopped traffic around Chicago made for a long, long day. I fear we kept them up too late visiting, and I am sure they were exhausted.

Paula and Mel pulled in the next morning and got settled in their spot.  We later planned a dinner together, with each family contributing something to add to the feast.  Paula served up the main portions and also a fantastic baklava for dessert!!!  We got rained out a few times, and Jack had the perfect idea to hide from the raindrops until they let up! LOL 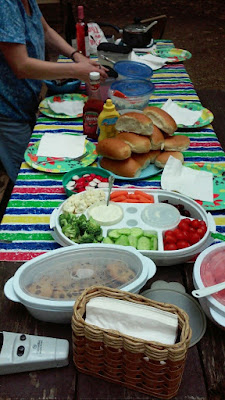 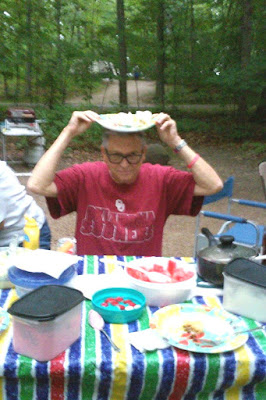 We did move the picnic table over under the awning to avoid the splatters....
and continued the gabfest on so many topics.

and the guys continued to solve all of the world's problems. 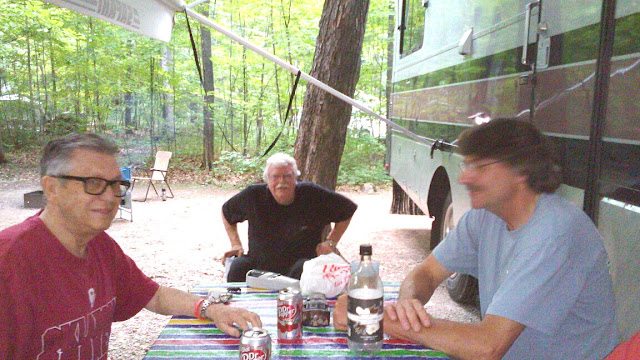 Later on, the rains held off a bit, so we could start up a campfire.  Conversations are always interesting around campfires, and we sure had a lot to say!  (note the tiki torch fluid?  great way to start a campfire when the wood is wet, because it burns slowly and will light easily) 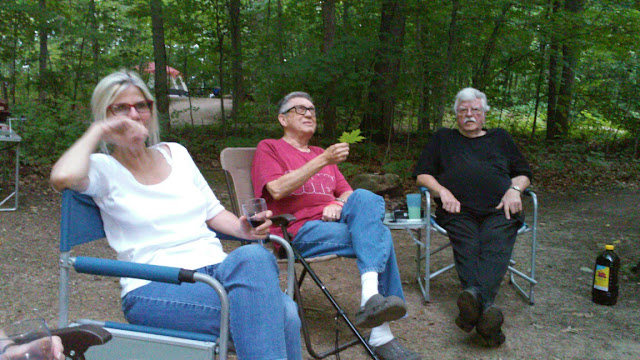 We gathered around the campfire until late, swapping stories, telling tales and figuring out the fixes and modifications we were all doing to our rigs.  Favorite places to visit, interesting people met, and crazy drivers on the roads were all prime topics around the campfire. 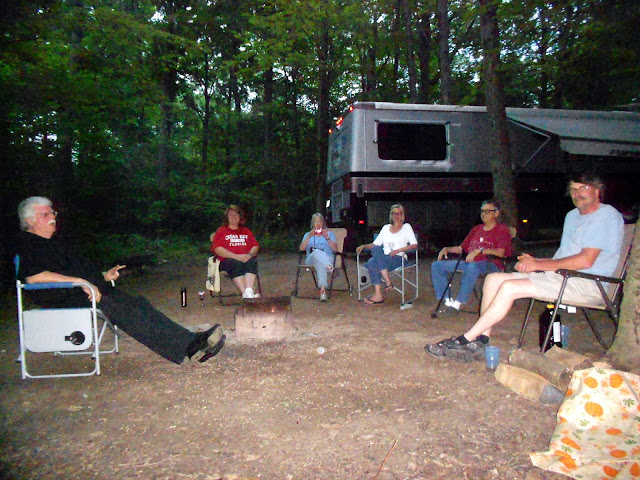 Again, we gabbed well into the night, until raindrops again pulled us to the awning, and then we gave up and headed home in our car.  The folks retreated to their rigs for a comfy night of sleep under the rainy night sky, listening to the drop drop drop sounds on the roofs of their rigs.  Ahhhhhhhh

The next day was pretty hot and humid, not my kind of camping weather.  The humidity really bothers my lungs.  Although we could have gotten a non-electric campsite nearby, I was not up to camping without the benefit of air conditioning for myself or for the dogs.  Steve was working all day at the park, and I caught up some stuff here at home.  Later, we planned another evening meal, with this time Conny planning the main meal and she did up a pan of brownies for dessert.  Gosh, we sure eat good, don't' we?   Spiced sausage, Trader Joes Beans, with fresh salad and melon to round out the meal. 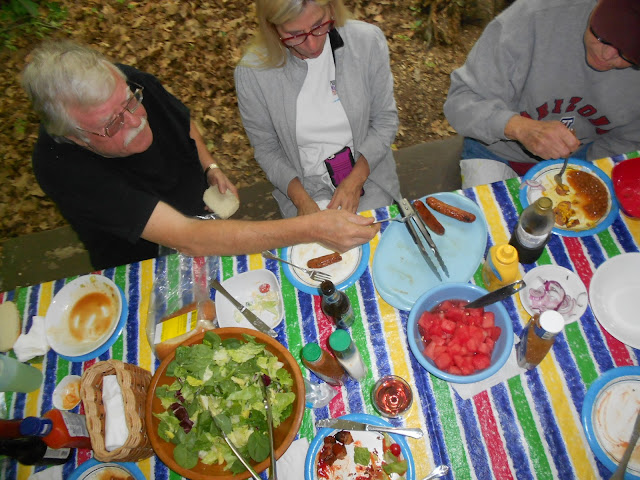 Now that the rains ended, the guys set about to solving all the problems on our Safari rigs.  Yes, things break and need repairs. Constantly.  Mel was showing Conny the differences in surge tanks, and showing her the placement of various componants on the back of his own rig.  She is a sponge for soaking up all the info and repair ideas to help maintain their own Safari. 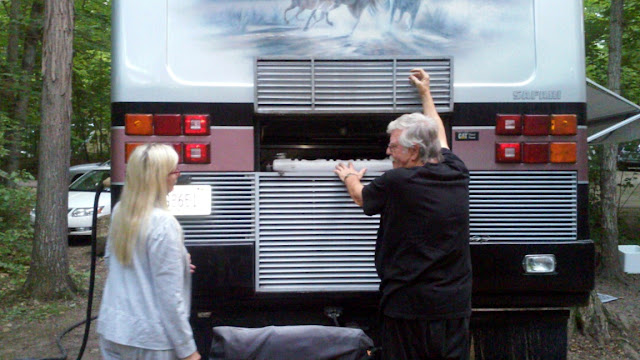 Mel hauled out his collapsible ladder and Steve was able to get up and examine the top of Conny and Jack's slide.  They are having trouble with the seals, so Steve was helping to figure out where the leaks were. She now has a better idea of what needs to be replaced and what can possibly just be repaired and caulked back into place. 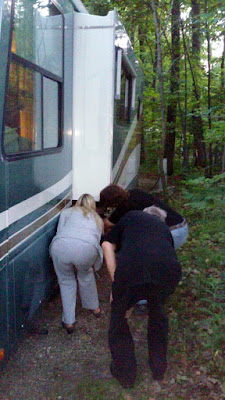 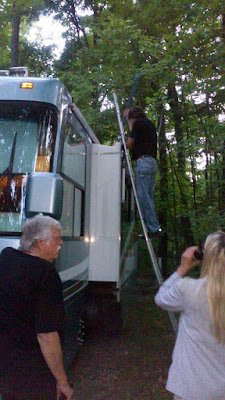 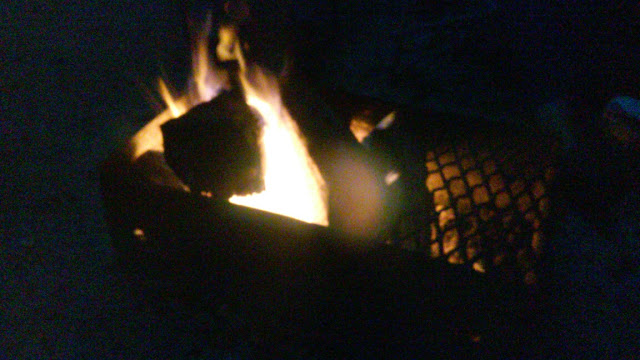 On the third day, Mel and Paula had to move to another campsite due to an incoming reservation.  It wasn't too bad though, they only had to move one more campsite to the south, and still were within walking distance of Conny and Jack's site.

Now it was time to start "Fixin Stuff"
Mel helped Connie with a frustrating shade device that is used as a visor when driving.
It would creep upwards with every bump in the road, and not hold into place.

Between Mel and Conny,
by George, I think they got it! 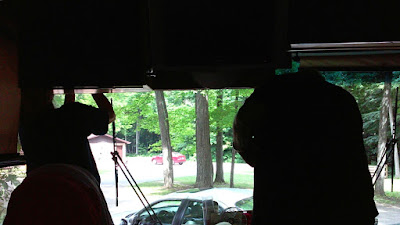 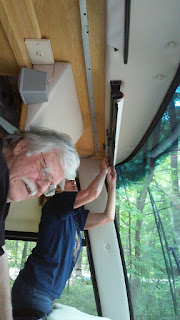 Later on, I took Conny and Jack on a tour over to our house, so they could get in a grocery store stop, and we also toured our motorhome parked in our yard.  They got to meet Finney, but Binney hid out upstairs as they took a quick tour of our house.

Now it was my turn to supply the main meal. I did up some shrimp scampi with noodles and steamed veggies.  We noshed on more leftover brownies and baklava for desserts.  For some reason, we always seem to make too much? 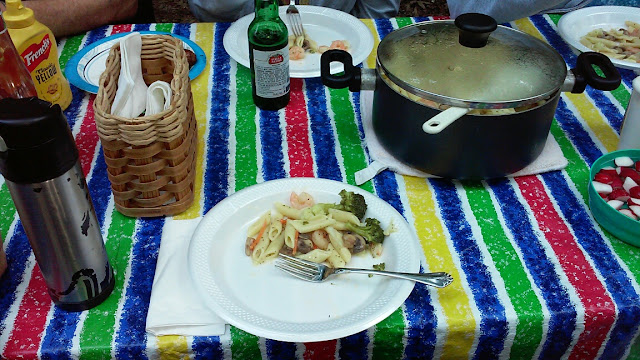 One more night of campfires....
and more conversations and ideas and thoughts and stories...
what a great group of people!


Paula snapped this hazy pic during the moist humid weather. Not sure if it's camping smoke or a fogged lens on her camera, but it really sums up the feeling of our own little Safari Rally together! 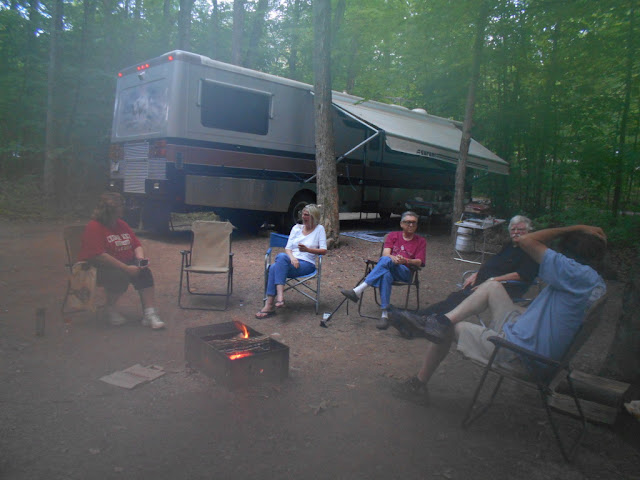 Posted by KarenInTheWoods at 8:35 AM