Yesterday,
I had the sad occasion to say goodbye to a
Dignified Gentleman. 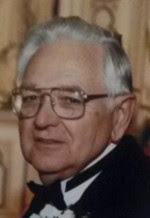 My dear friend Juanita had to lay to rest her darling husband, Norm Hofstrom. His obituary reads as follows:


Norman T. Hofstrom
Clinton
Norman T. Hofstrom, age 86, of Clinton died Friday June 26, 2015 at Beloit Memorial Hospital. He was born November 23, 1928 to the late David H. and Wilhemina (Thompson) Hofstrom in Clinton. Norm attended Clinton High School, class of 1946. He married Juanita L. Larson on June 23, 1957 in Capron, IL. Norm enlisted into the U.S. Army on January 15, 1951 and served his Country until honorable discharge on January 19, 1953. He was a member of Jefferson Prairie Lutheran Church and the Clinton American Legion Post 440. Norm worked at Wagners and was well known as a dependable guru of cameras. He loved airplanes, especially the Beegee Airplane and always enjoyed EAA in Oshkosh. Norm built many radio controlled airplanes and enjoyed the camaraderie at the airports. He was a dedicated, quiet and supportive family man. Norm will be remembered as an accomplished local photographer at sporting events as well as his contributions to the Clinton Topper.
He is survived by his wife, Juanita Hofstrom; his three children, Mark (Judy) Hofstrom, Michelle (Philip) Randall and Melanie (Greg) Waite; three grandchildren, Philip Waite, Joanna Waite and Jamie Scott.
He was preceded in death by his parents, his son, Matthew David Hofstrom, his infant daughter, Mary Beth, his sister, Dorothy (Sigurd) Peterson and his two brothers, Lester & Gordon.
The family would like to thank the staff at Beloit Regional Hospice for the care they gave Norm.
Norm’s Funeral Service will be 11:00 a.m. on Wednesday July 1, 2015 at JEFFERSON PRAIRIE LUTHERAN CHURCH, 23184 Bergen Road, Poplar Grove, IL with Pastor Thomas G. Groth officiating.  Friends will be received from 5:00 p.m. until 7:00 p.m. on Tuesday in the Brian G. Mark Funeral Home, 504 Milwaukee Road, Clinton and again on Wednesday at Church from 10:00 a.m. until the time of service.  Following Norman’s service the cortege will process to Jefferson Prairie West Cemetery for Full Military Burial Rites and interment. In lieu of flowers, memorials may be directed to the Clinton Girls Athletic Dept.

I have such fond memories of this truly gentle man, who was kind, courteous, and possessed a quiet sense of humor that provoked smiles and thoughts of goodness.  He never swore, cussed, gossiped or said a bad word about anyone that I know of.

Norm was a photographer, and Juanita a weaver.  They shared a studio in a church they had acquired in the tiny Wisconsin village of Shopiere. Norm had the upper level for his gallery and Juanita has the lower level for her weaving.  Norm's darkroom was nearby the kitchen area, close to Juanita's weaving and storage.  He was the organizer, fixer and assistant with cutting up fabrics and helping to warp up the looms. 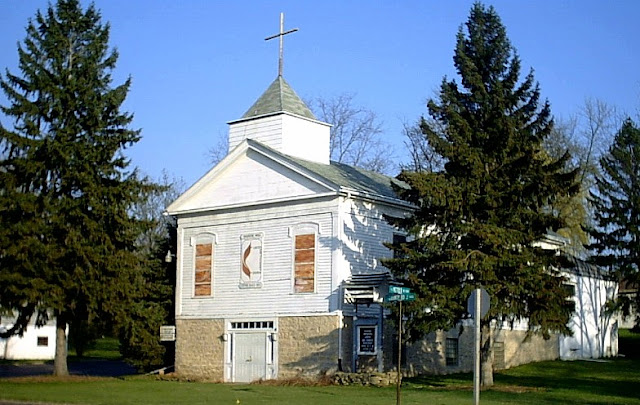 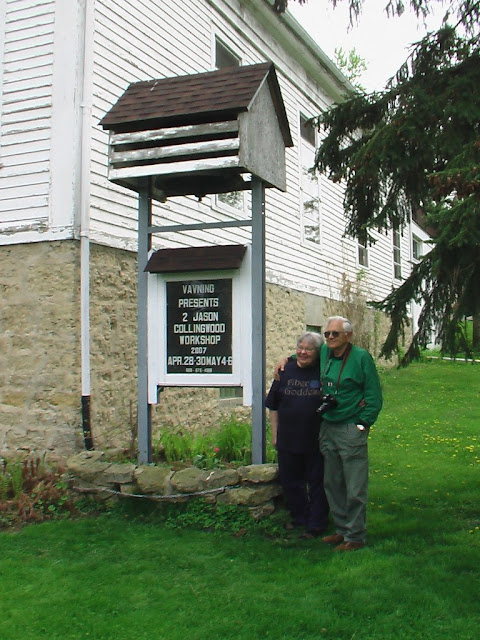 Once, during a visit to their Vavning Studio. I had admired a photo that Norm had taken of his wife, long ago.  This is Juanita, with a shuttle in her hand.  What a glorious lady! 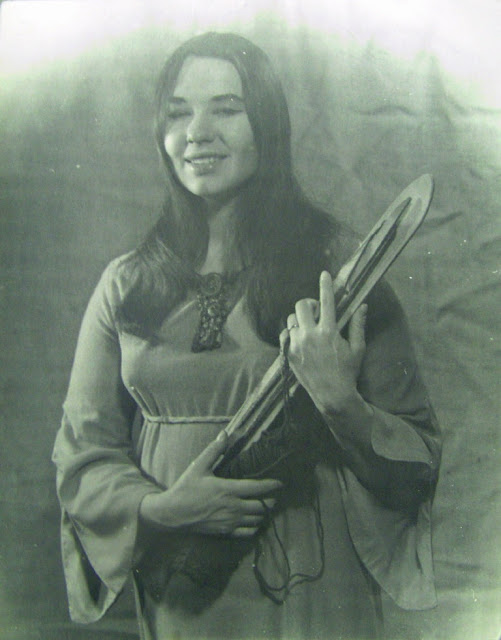 That sparked Norm into action, and we spent a whole two days digging through negatives in his darkroom, examining photos from the past.  We tripped and trotted down memory lane, seeing photos from their entire lives in those boxes of negatives.  Oh... so many smiles on his normally stoic face.  And a few sniffs, seeing photos of family members that had passed on. I didn't get much weaving done that weekend, but I sure enjoyed Norm sharing all those memories with me.


Yesterday, I trekked on down 150 miles to be by my friend's side as we laid him to rest, surrounded by friends and family and a gathering of military vets with a flag, taps and burial salute with rounds of gunshots.  Very solemn and dignified.  A funeral befitting a man who deserved this recognition.

The pastor at their tiny farming community church was extolling just the very same values, and stressed that Norm was a Dignified Gentleman.  Yes.  We agree.

After the gracious funeral and delicious meal served by well-meaning church ladies, Juanita and a few of her close weaving friends spent time around a table in a little local restaurant sipping iced tea and lemonade.  It was good to relax and laugh a bit and chat and be there to be with Juanita. No more tears.  Time to be close and supportive to the newness of it all for her. And her journey to come without Norm by her side.


Quiet Norm, who was always around and behind the scenes at various workshops and weaving gatherings that Juanita hosted at the studio.   Always there to lend a hand, a tool, adjust someone's loom, or just take pics of the events going on. 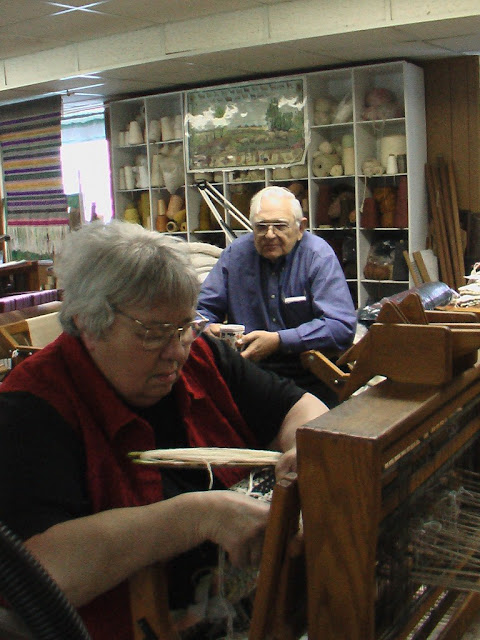 You rarely saw Norm without a camera slung around his neck.  At each of our big weaving workshops, it was Norm's task to take a group photo outside, of all the attendees lined up in front of the studio.  Everyone would pile a bunch of cameras and cell phones on him to snap their pics too.  He goodheartedly complied with the requests.... haha  Sometimes he would get my Steve, his assistant, to help! 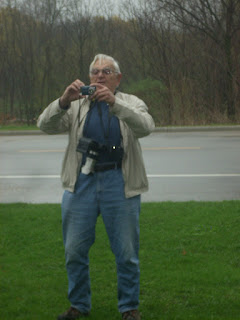 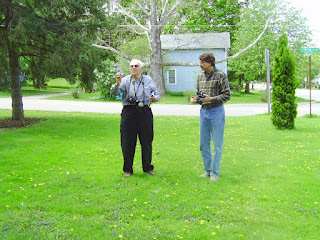 Steve and Norm would sneak off to the local diner to chat with his airplane buddies, or hang out at the airport, and find "guy stuff" to do while we women were weaving...  They always found something to keep themselves busy. 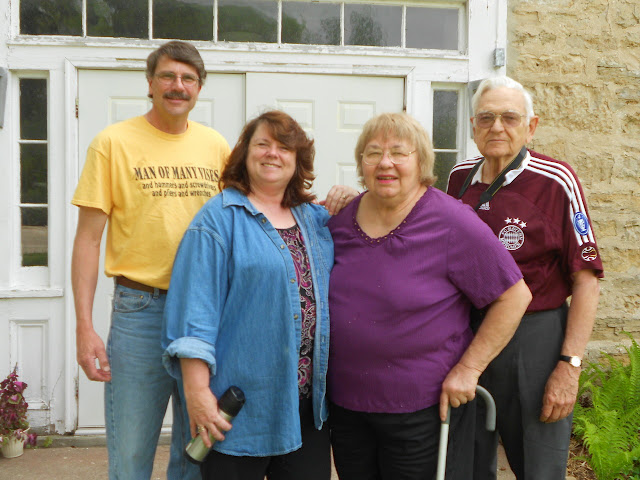 Juanita and Norm were our "first guests" the day we picked up our motorhome
in nearby Rockford.  We served them lunch in our rig.... 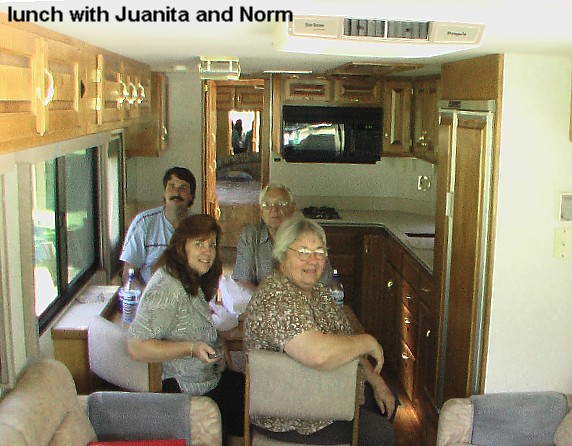 Usually always together, you could see Norm waiting patiently while Nita did her thing.  He was the quiet compliment to her energy.  Both so creative and thoughtful and kind. 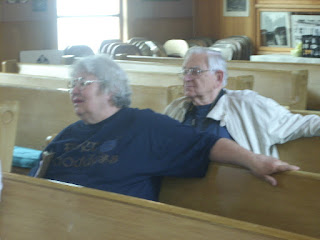 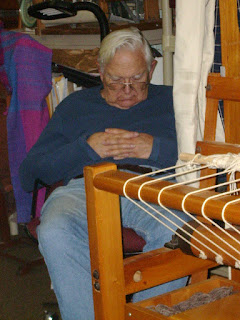 Eventually, Juanita got Norm to try his hand at weaving.  With a middle name of THOR, he was a mighty rug beater and made firmly beaten rugs... what a guy! 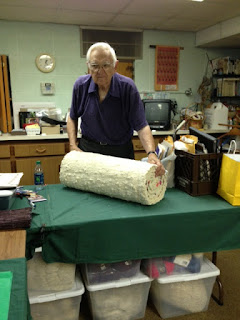 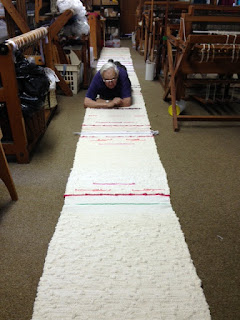 After the funeral, I took Juanita back to her home.  Her empty home now, with Norm's big recliner chair sitting there in front of his beloved tv to watch his sports... while she sat in her prim Queen Anne wingback chair nearby.  We chatted and reminisced and went through some photos and some past silliness.  It was good.

After such a long day, it was time for me to make my exit and let her rest.  My heart is with you, dear Juanita, as you enter the next chapter in your life.  And, we will always remember your Dignified Gentleman. 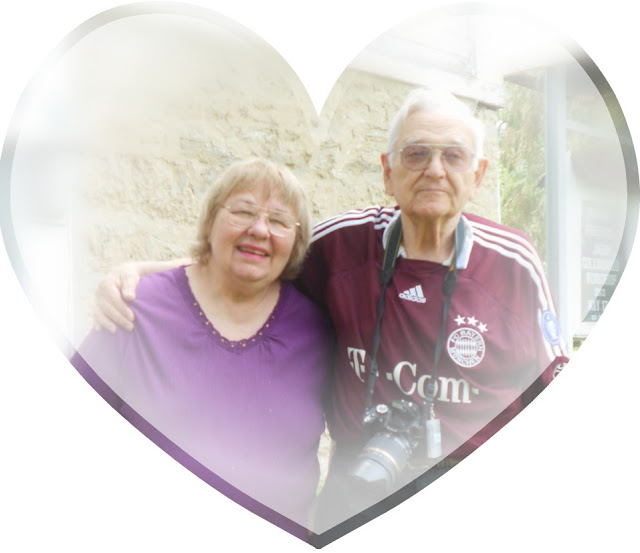 Posted by KarenInTheWoods at 9:37 AM