Our little guy Jameson needed a weekend away from his parents (his mommy was standing up in a wedding 100 miles away)  so he ran away to his grandparents' house for the weekend!  LOL

Actually, I picked him up on Friday morning and we did our grocery shopping, letting him pick out all his favorite treats.  Heh heh    He asked a zillion times "What's this??"  and we explored the skin on a pineapple, the netting on a frozen turkey, why yellow squash are not bananas and best of all, WHY would Granmuddah buy GREEN APPLES!!!!???  He was insistent that apples are RED!  But I wanted some green Granny Smith ones to bake into a pie.  That just didn't settle right in HIS world.  haha

We got home and he helped put them all away.  Soon his Auntie Erin stopped by with cousin Chelsea!   They played and played--- coloring, chasing, running, teasing, and eating supper and snacks.   Chelsea devoured her chicken stir fry, but we could not pry a single green bean or carrot into Jameson.  Whew... what a kid, he has decided he hates vegetables!

Both kids are excited about Trick Or Treat coming up soon.  They have decided on their costumes and will be here all dressed to the nines with their third cousin Allegra on Halloween (my birthday!)   Pictures of all them will be posted right afterwards.  Of course. 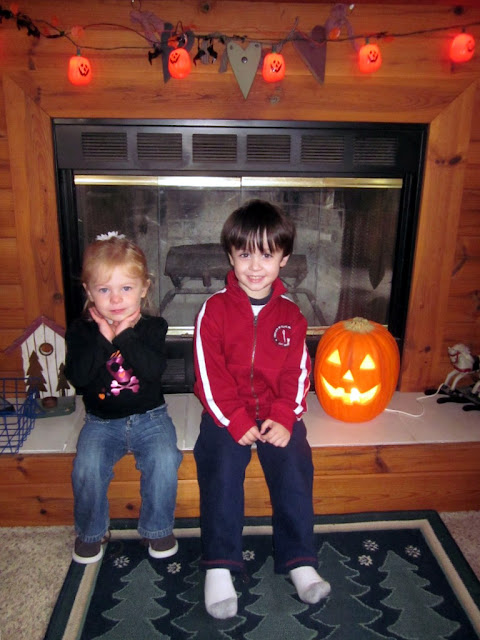 All of the grandkids have become enamored by Grandmuddah's fun weaving toys.  They belly up to the loom and love to do a BEAT BEAT BEAT of the beater, and flip the levers to make the harnesses go up and down.  Here I had my lap full, and both of them HAD to have a boat shuttle.  I agree, these are fun toys! 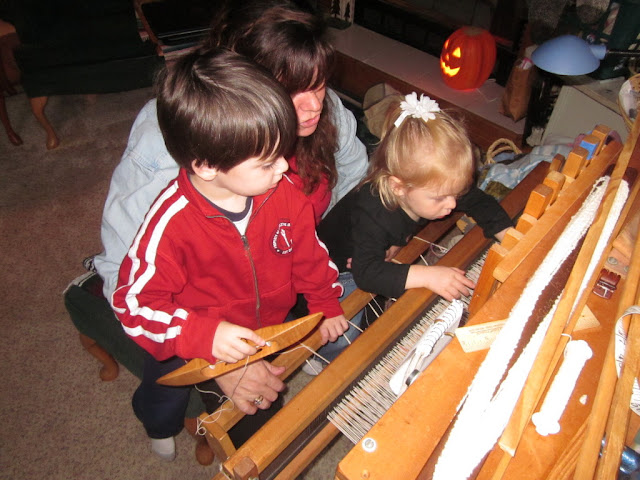 Here we were just getting started on a dishtowel.  All three grandchildren have *helped* with the last one, and it came out pretty good, even with a few skipped wefts and warps.  It was made with love, and that makes it even more precious.


Lucky boy Jameson is going through the new Fleet Farm Toy Catalog.  He was choosing and looking and pointing out things he already has.  I swear we went through it, page by page, 17 times before the weekend was over.  I am not exaggerating, he really made me turn them page by page, each time asking "What's this?"  "What's this?"   Just look at that little crooked finger pointing out item after item. 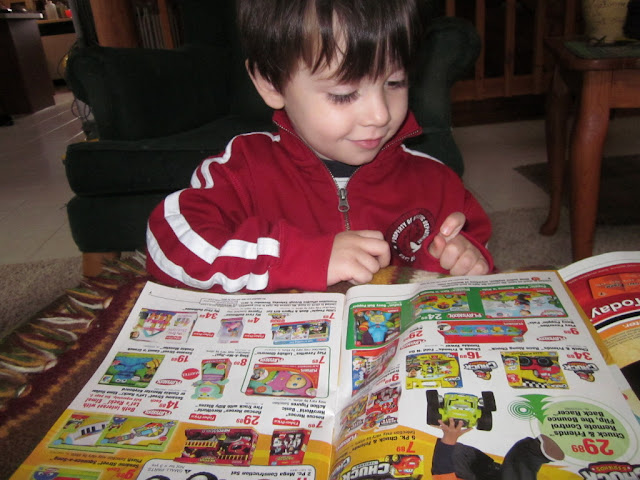 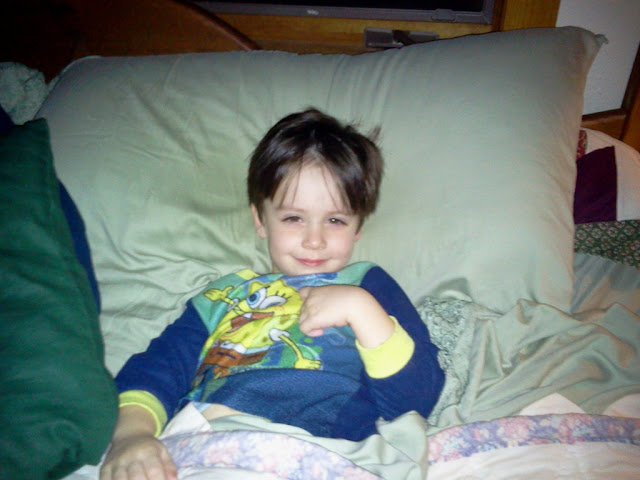 He got all snuggled into bed and wanted me to write an email message to his mommy and daddy.
So this is what he dictated to me:
I am going to sleep
You go to sleep?
Send a message to Jameson?
Go to sleep

Jameson loves his mommy and daddy
(doesn't that just melt your heart?)
He re-charged his little boy batteries overnight, and by 8 am he was up and bouncing on our bed.  Please note, both Granfaddah and the little boy are wearing matching Sponge Bob jammies!!!!  (Steve is gonna kill me when he reads this) 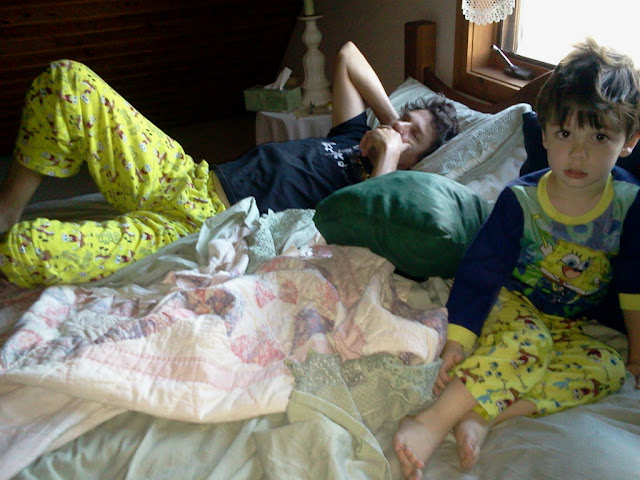 The day was sunny, but still very windy, blustery and cold!   The boys got themselves occupied with a big tub of Lincoln Logs.  It was a very busy morning on the floor, with both of them in their jammies till after 10 am!  Must have been the required work uniform for their log home building business? 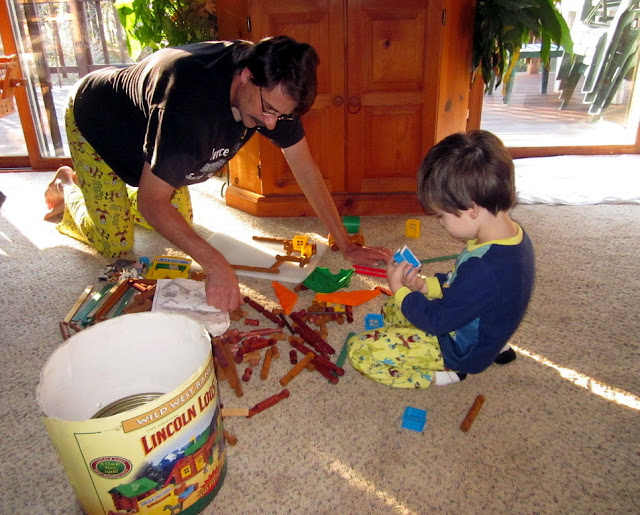 Steveio wanted to get out to the motorhome and work on the switch timer that I wrote about in the last blog, so that was the only way to get the little guy dressed, by promising him he could come out and watch cartoons in the motorhome and "help" us.
The rest of the day was spent down in my Loom Room, where he was helping me weave a Birch Tree Rug.  He wove almost a foot worth of rug with me, and was fascinated (as usual) with the big looms too.  He helped me unroll four finished rugs off the little Union, and the unrolling and ratcheting of the take up beam was entrancing to him.  I showed him the ratchet and pawl device, and then he explored the treadles which make the harnesses go up and down.  He was figuring it all out and examining it very seriously and understanding it all.  The feet on the treadles do the same thing as the levers do on the table loom!  He wanted to know why the roller on the take up beam only went one way, and not the other.  I showed how the pawl locked it into place.  Then I let him advance the rug we wove on the big Union, and he was soooo excited to be the one to pull the lever up... click click click and make it move the takeup beam.  I was careful to make sure we didn't have any pinched fingers.  He sure enjoyed exploring those big machines and making them GO!
After supper, we did some cookie baking!   I cheated and bought rolls of premade dough--- all we had to do was slice and bake.  It was a good thing, because this impatient little guy wanted those cookies FAST!  He helped line them all up on the trays...   WHY do they take so long to bake?  He watching the numbers on the digital timer count down to DONE!  He proudly brought one cookie to his Grandfaddah for  approval.  How adorable! We set aside a dozen to take home for his Mommy and Daddy too. 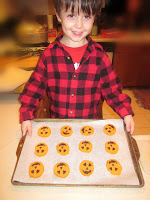 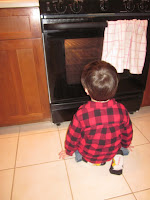 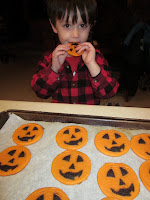 We were spending the rest of the evening in front of the tv, with the guys watching NASCAR.  (I find it totally boring)   I was weaving nearby on a towel and he came over from time to time to help throw the shuttle or pull the levers for me.
For the race, they each picked out a car to *be* and were discussing who was winning and who was passing who.   A big bowl of popcorn is necessary for NASCAR racing, I was told.  Then I picked a car to *be* too, and I passed them both!  Whew, they didn't like that.   I was sent back to my weaving.
Suddenly, just as surprising as the night before, Jameson announced he was going up to bed, and started climbing the stairs to the loft!   I think we were wearing him out!
Sunday morning found him wolfing down three of Granfaddah's homemade Belgian waffles, and then it was play play play some more with the Lincoln Logs, Legos, ABC letters, colored pencils, and back and forth to my looms.  It was a Packer Game day, so his mommy and daddy drove on up after the game started, as they only live a few miles from the stadium.  This way they avoided all the traffic because everyone was at the game by 11-12 oclock ish.  We sadly said good-bye to Jameson, as he was buckled into the car, clutching his goodie bag of cookies and treats to take back home.
Good bye, little guy.... see you soon!
Oh, and I took a cookie over for cousin Chelsea this morning
so she could try out her big cousin's baking talents. 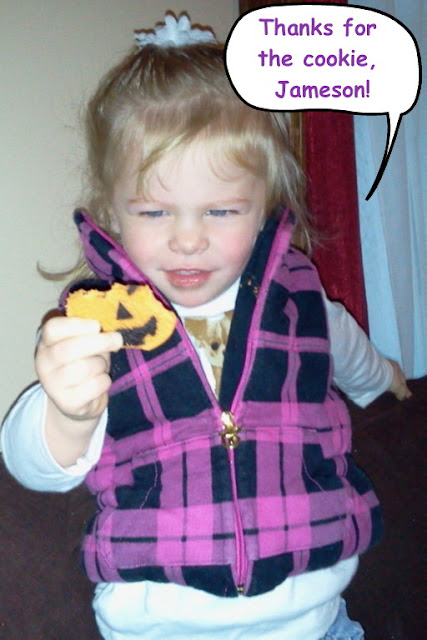 Posted by KarenInTheWoods at 12:52 PM