With Steveio taking a Friday off as an unpaid furlough day, we were able to sneak off and enjoy more of this Indian Summer we are blessed with.  The temps are in the high 70's for days on end, and we are making the most of it before it changes.

I had the rig all loaded up before Steve came home from work as usual, and we were ready to roll within minutes of him pulling into the driveway.  With the darkness coming faster and faster these days, if we are going any distance at all, we need to hit the ground running from 4pm if we want to get anywhere and set up before darkness falls.

We drove north in Wisconsin and crossed the border into the U.P. of Michigan at the Menominee River.  We knew of some WE Energies free campgrounds along the river, but we discovered those are already closed up for the season.    But Chalk Hills Campground was open, so we pulled in there....   25 sites near the Chalk Hills Dam http://www.chalkhillscampground.com/     We enjoy coming here and try to get here at least once or twice a year.   Pulling in, we found another couple we met last time we were here too! 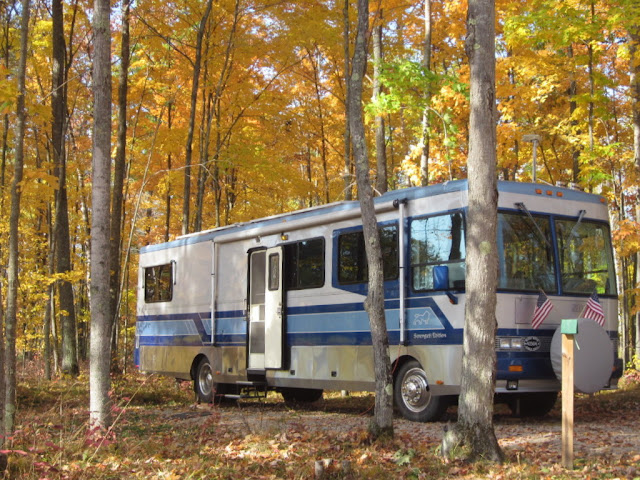 On the other end of the campground, by our favorite site were red reserved tags for a trio of campers due in later on Friday.  Also a few others were scattered here and there.  Nice to see more and more people finding this place, as it's a fairly new campground, about 3 years old.   At only $15 a night, with electric (some sites 50amp some sites 30 amp)  water at the entrance and situated in tall hardwoods, its' a pleasant place to camp.
We were surrounded by golden trees and rich autumn scenery.  We can only see two campers from our  windows, so it's pretty nice in our site number four.  I was playing with the panoramic mode on the Galaxy Tablet again, fun fun fun!  We love having large windows all around in the motorhome living area, it's all view and very little wall space blocking it.

(As I type this now on Saturday morning, we have 12 of the 25 sites occupied)

The moon has been almost full at night, creating an eerie glow on the golden leaves, but we went to bed with peace and quiet and restful sleep.  The morning was amazing with misty fog laying low, and the bright orange and gold and yellow leaves sticking up through it, along with the burgundy ground cover peeking through the fog too. 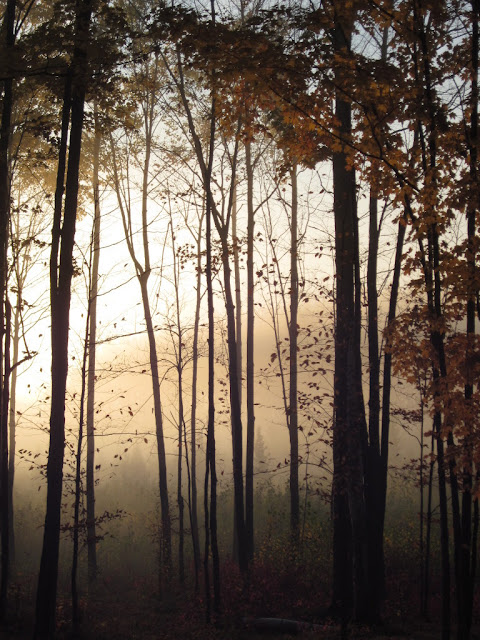 I snapped these pics outta the bedroom window and promptly crawled back into bed. 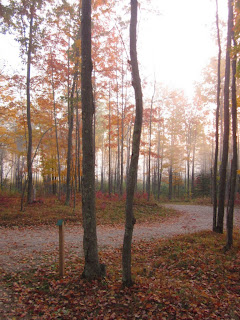 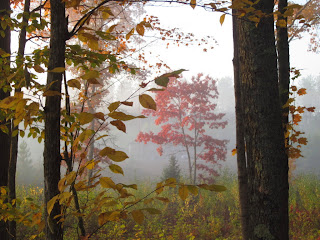 Our day was kinda lazy, we sat around and worked on some projects... and then we took a ride in the Tracker up the rugged dirt road.  Of course the dogs go along, which is now possible that we tow the Tracker.  It's kinda hard to take dogs along if you are zooming around on a scooter like we did before.   LOL . 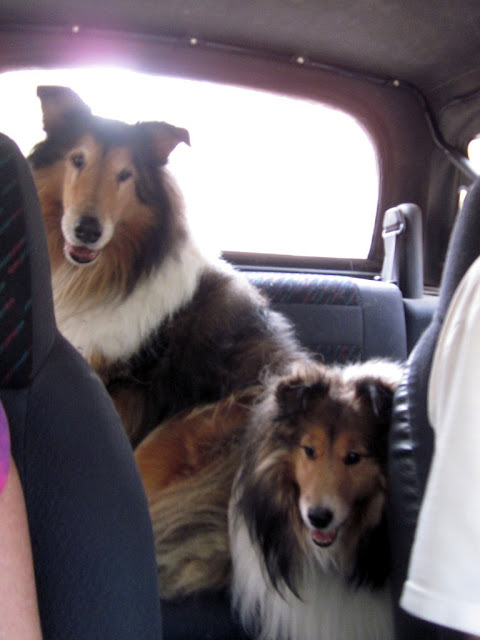 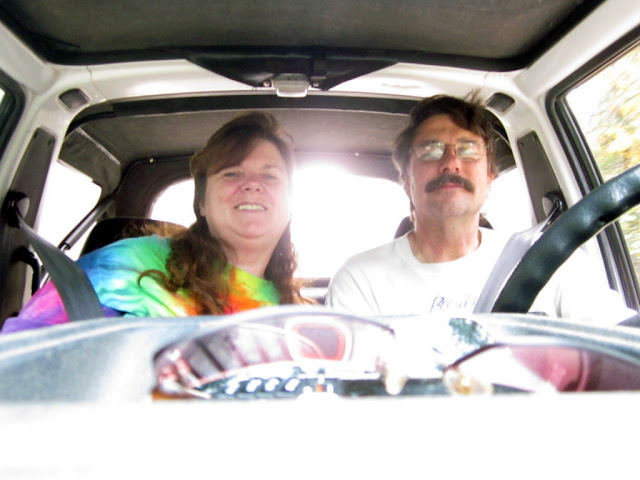 We went a ways up to the Pemine Falls and walked on down with the dogs to take a look again. 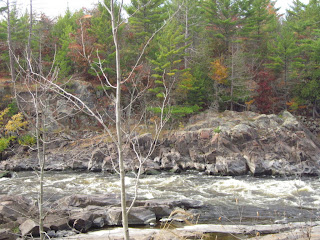 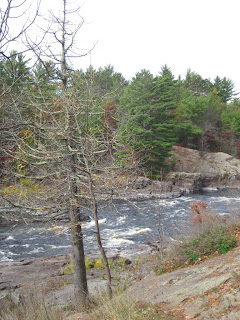 We have been here a few times before, but it was nice to sit and watch the water race on by.  An older couple were down along the edge doing some photography (we saw their license plate that said "I photo") so we left them to their business and headed on up the road further towards Sturgeon Bend township campground just to see if anyone was up there.  (1 tent)   The road up that way still had a lot of fallen trees we had to scoot around and some leaners into the roadway, so we would not have made it through up there even if we did want to with the motorhome.  We had been there before, but came around the from the north through Faithorn, MI and work our way down.   We were happy at the Chalk Hills, so that was fine too.

We chatted with the neighbors a bit and got a recommendation on a good place to go for a Friday Fish Fry.  Called The Camp Shakey Saloon (near the Shakey Lakes)   So we decided to head on over for a nice evening meal. 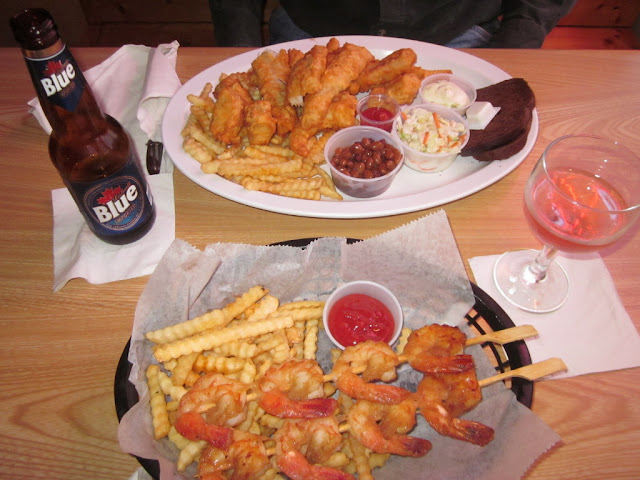 Wowzers did they ever pile on the fish for Steve's Fisherman Platter!  Typical of the large portions known for Fish Fry night in the northwoods.  People want the value for their money, and restaurants sure serve it up.  There always seem to be leftovers to take home and make another meal from the next day.   I ordered the Garlic Lime Glazed shrimp on a stick, and got TWO skewers with eight big jumbo shrimp that were scrumptious!

We waddled out the door, clutching our doggie bags.  LOL  I think Steveio used up his cholesterol limit for the MONTH~!   Headed back to the campground to make a nice campfire and enjoy the evening.  The winds were kicking up a little, but it was still very warm out, at least 70 degrees as the sun went down and the almost full moon came up.   It will be full on October 12th.  We enjoyed a campfire and some "beverages" until we could not keep our eyes open much longer. 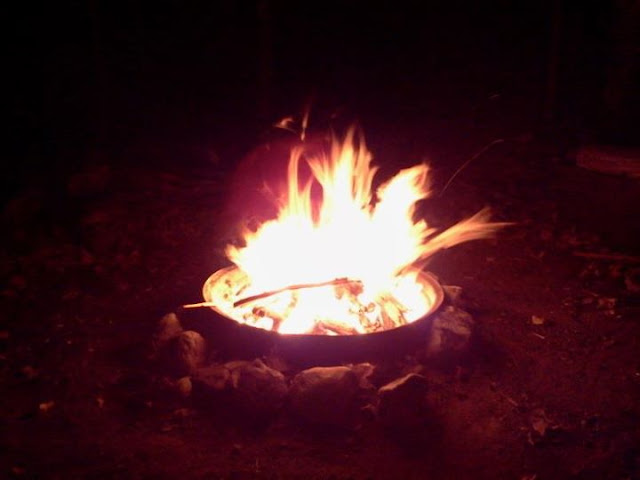 And today is a special day for our daughter Heather and son-in-law Jesse.  It's their wedding anniversary!  Thank you for bringing our wonderful grandson Jameson into our lives! 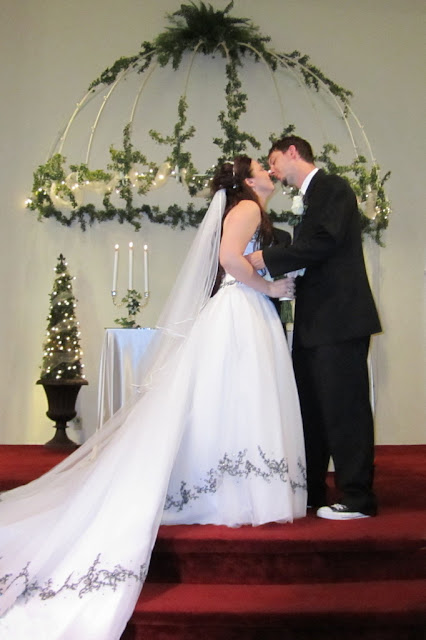 Posted by KarenInTheWoods at 10:47 AM