Dreary Winter Week ahead of us

Now that we are home from our vacation, we are trying to catch up on things around the house.  How depressing is that?  So I didn't have much to write about all week for a blog.  Once the excitement of the vacation is over, it's not too interesting to read about coming back home and feeling like drudge drudge drudge!

For any of you new readers, here is the first post about our vacation as we took off 2 months ago:
http://kareninthewoods-kareninthewoods.blogspot.com/2011/02/vacation-heading-south-from-wisconsin.html

The bright spots about coming home are the grandchildren!   We were able to go see Chelsea right away, as they live close by and we went to town to get the rest of our mail (Erin had been picking it up for us every few weeks)   We brought her some souvenirs, and enjoyed seeing her again.

At first, she stood far away and stared at us! Almost broke my heart, thinking we had been gone too long and she forgot us!  But soon she was flying into my arms, and cuddling in my lap.   I got lots of hugs and kisses too.  She was her silly girl self in no time. 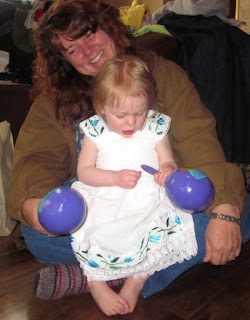 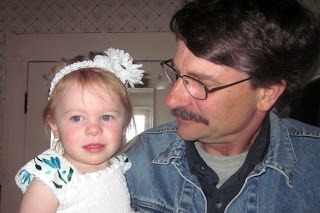 We brought them a Mexican woven blanket to be used for picnics...
which little Chelsea sat herself down in the center of the big star to try it out. 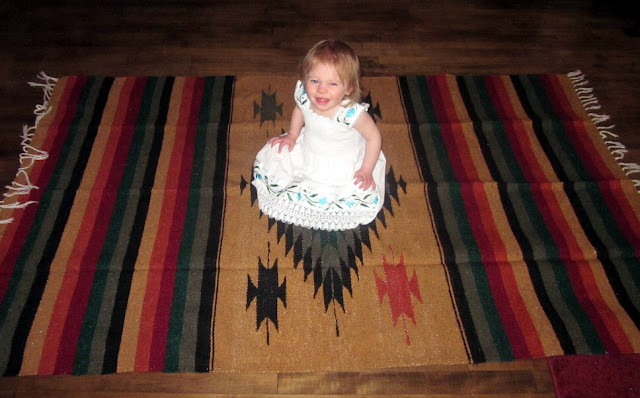 She put on her dainty little Mexican Senorita dress, and was twirling and spinning with the pretty lace around her ankles. It was hard to get her to stand still for a few shots. 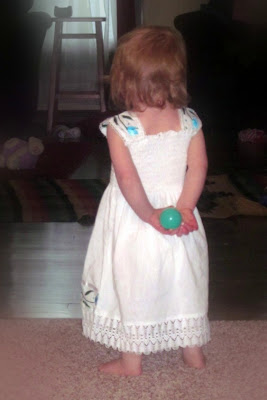 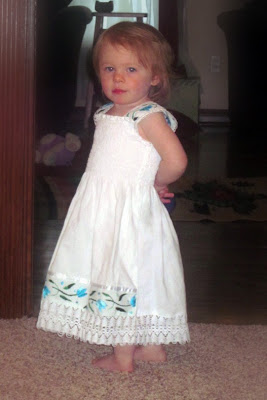 We came home just in time... because this week Chelsea's little day care had some festivities planned.  On Wednesday, they had a little parade through the downtown of our city, with the older kids marching and singing, waving pompoms. The younger ones got to ride along.  Here is Chelsea, up front with little Finn on the 6 seater kiddie stroller!   Wave those pompoms, kiddies! 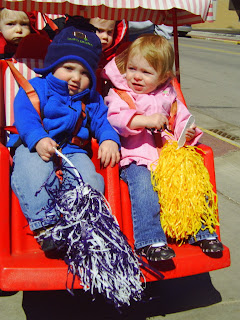 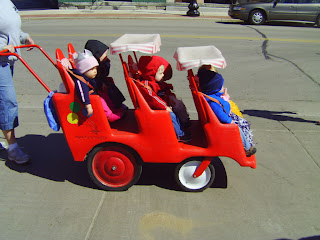 They even went though the local City Hall, in the front door, down the long hall, and stopping at the big banquet room in the back where the Senior Citizens were having their Meal Site day...  they sure enjoyed seeing all the little ones on their parade!  Then out the back door and down the sidewalk back to the day care. 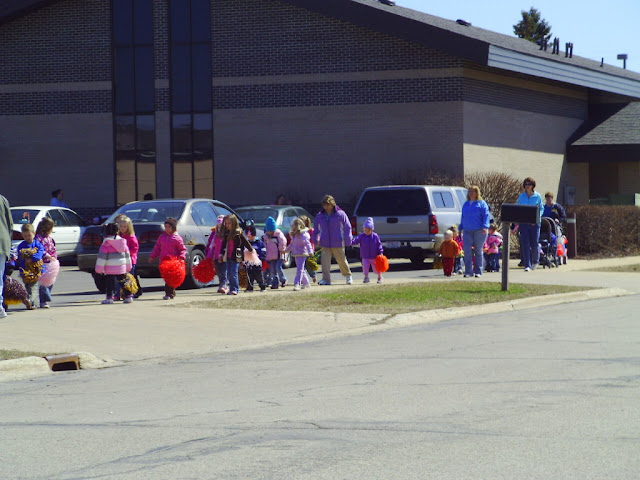 I was invited to a special Pancake Breakfast at the daycare.  And yes, Chelsea even fed me pancakes! 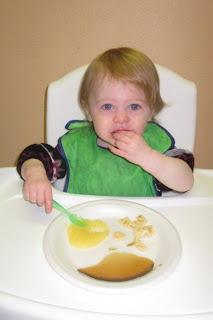 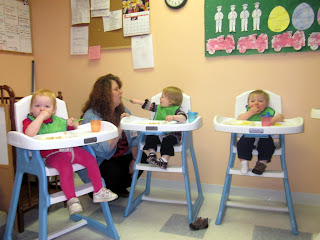 And what can be more fun than a box?  They crawl in and out and let the flap come down to hide out... the older kids at the day care center "decorated" it for the little kid room.  How cute is that? 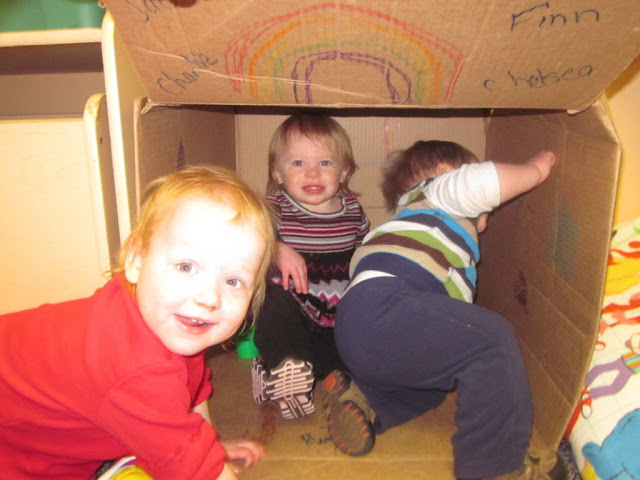 Steve went back to work on Wednesday as planned, but he was coming down with the same horrible flu/cold I had during the last few days of vacation in Missouri. I guess I "shared"  huh?   He felt so awful Thursday morning, that he tried to get ready to go into work, but was so ill he had to get undressed and crawl back into bed. I know JUST how he felt!  You know he has to be REALLY sick to miss a day of work, and especially having tons to catch up on there, it's going to be a long haul for him to start getting back into the swing of things.  Two more people in his department abruptly retired quick while he was gone, in the wake of our new Gubbner Walker Budget Cuts.  Of course replacement staff will probably not be hired.  That makes even more work for Steve's department.    More work, less guys.
The weather here has been very depressing too.. this is what we woke up on Saturday morning: 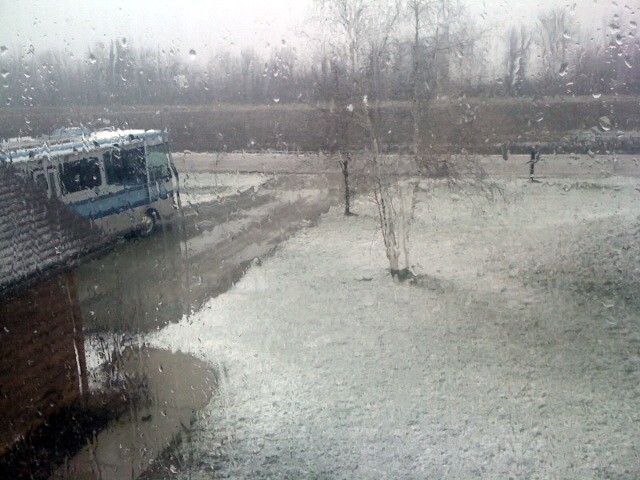 Rain, sleet and then finally ...snow...
Next up on the souvenir list was little Allegra... we drove down to Green Bay on Saturday to see her.  Again, she too gave us the Ole StinkEye when we came in, as if to say: "Who are you Crazy People?"   But soon she was doing high fives and knucks with us,  Daddy put on her little Mexican Senorita Dress to dance around in. 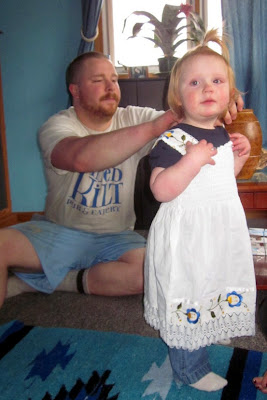 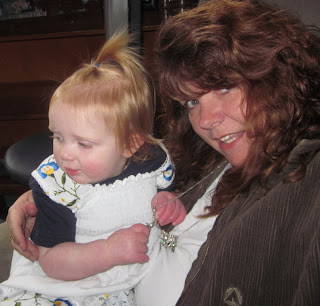 and Mommy showed her how to play her maracas. 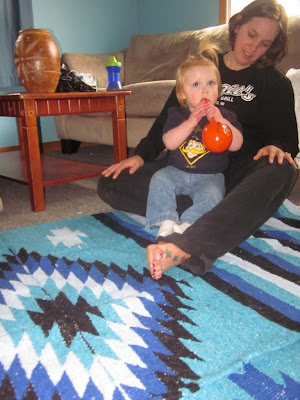 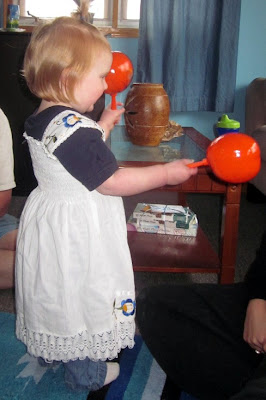 What a little nut, she was soon all over the place, enjoying the attention of having her Granmuddah and Granfaddah Pfun come to visit. 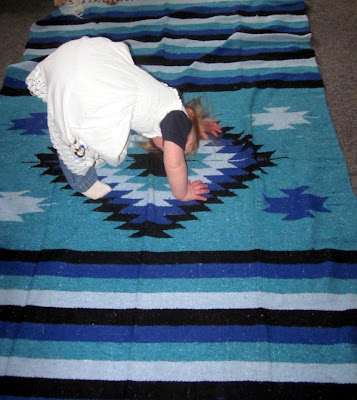 We didn't get to visit Jameson as he was gone to a birthday party while we were in Green Bay.
So we will be seeing him on Easter and will give him his souvenirs then.
We did a pile of grocery shopping at Aldis in Green Bay, and drove back home.

We holed up for the rest of the weekend in our easy chairs, Steveio with his laptop going,
and I, with the sock machine a-cranking. 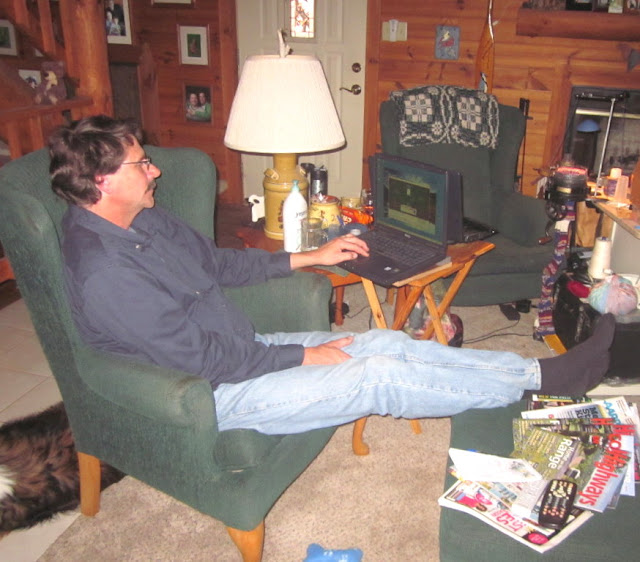 I had to finish up 5 pairs for friend Lisa, and 8 pairs for friends Jeanie & Ray and then 4 more pairs for some friends of theirs!  Whew... so it was a crank-a-thon during the depressing dreary icky weather.

(these are all spoken for--- but I can knit new ones for anyone who wants them)
We did get a bit of sun poking through the trees for sunset on Sunday,
so I snapped a few shots from the back deck, through the bare woods towards the river. 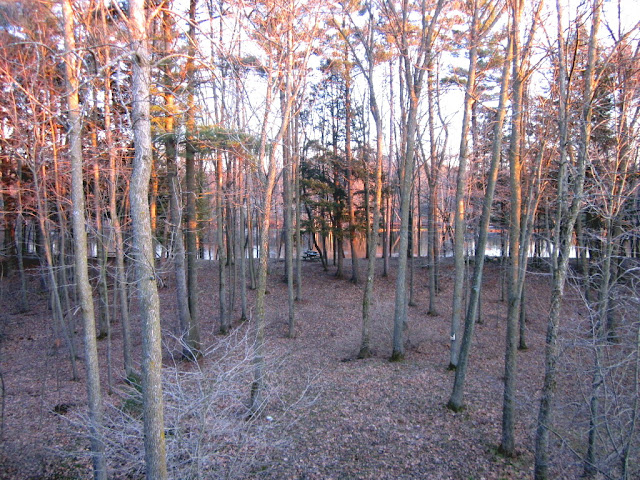 The water level is way up, about 6 inches below "flood stage" right now,
and will be much higher before the end of the week. 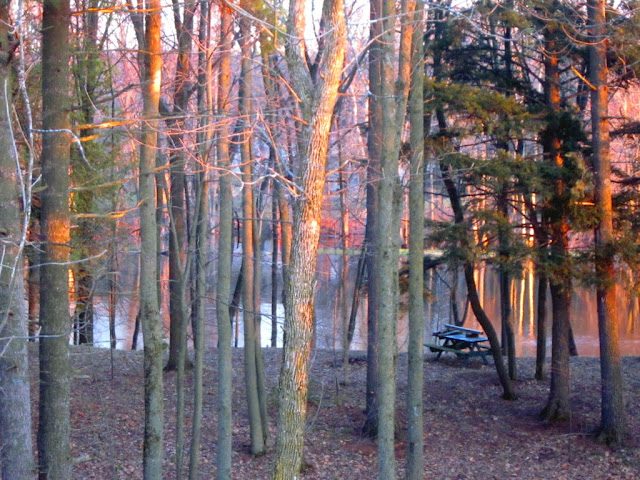 Why????  Just look what our forecast says for tomorrow night????

Posted by KarenInTheWoods at 2:05 PM