Woke up to 12 degrees frosty cold winter in Wisconsin, but we didn't care, we were LEAVING!   It was day ONE of our VACATION!

(we didn't take a vacation last winter because we had two new grandbabies arriving on the scene in Dec and Jan.  so this year we are going to make up for it!)

We loaded up the last few items like laptops, cameras, and phones... then the dogs (can't forget them, they were driving us NUTS in anticipation)  We set the alarms on the house and garage, and the neighbors know we are leaving and are keeping an eye on things, plus our kids are going over to take care of snow, mail, plants and just checking things out for us.

Steve had preplanned and brought in the garden hose the night before so it was soft and pliable before hauling it out the fill the water tank.  (last year we cracked and broke a cold hose stored in the garage by trying to stretch it out.)

So he got it all stretched out and started to fill the tank.. but "Rut -Roh"  the fill port fitting on the side of the motorhome water manifold was frozen up!   So out came the hairdryer and in a few minutes we were filing up our 100 gallon fresh water tank. 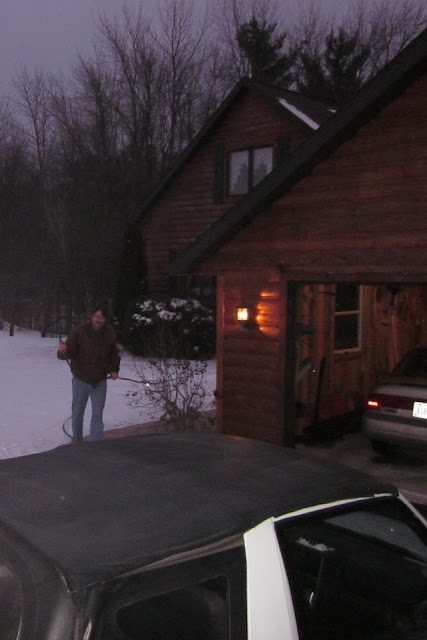 See how dark it was out yet?   Here was the view out the front windshield...brrrrrr 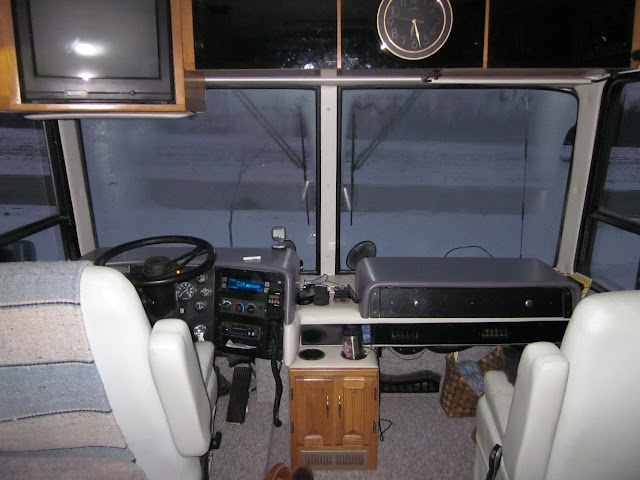 We had considered waiting till we were further south to fill it, but we do like the taste of our well water, the dogs are used to our well water, and we could enjoy a shower or do dishes on the first night if we had the tank full.  Later after that 100 gallons get used up, we will buy drinking water for the dogs.   Long hair on the butt dogs are NOT FUN if they get diarrhea!  Our basement compartments are heated when we run the big furnace, so we would be fine in that respect.   But honestly, we like running just the Olympian Wave 8 instead of the big furnace.  Uses less propane, and more important NO POWER as there isn't a fan or blower unit on it.

By 6:45am  Steveio fired up the big rig..... we pulled outta the yard, hooked up the Tracker and left Oconto.  It was just starting to get light and we were on our way!!!! 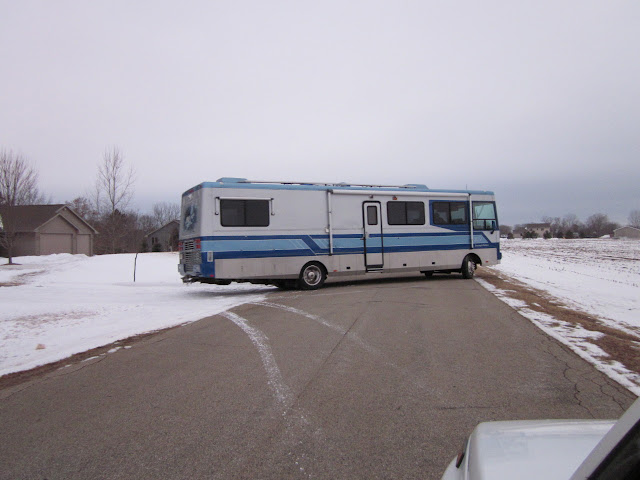 Bye House and Garage- be good while we are gone! 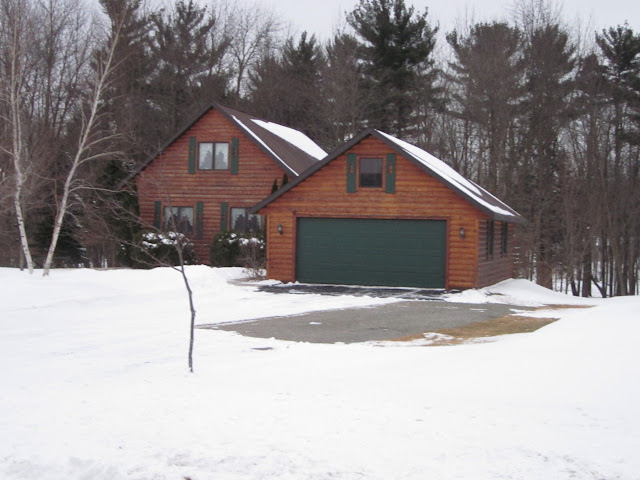 And we were all set to hit the road! 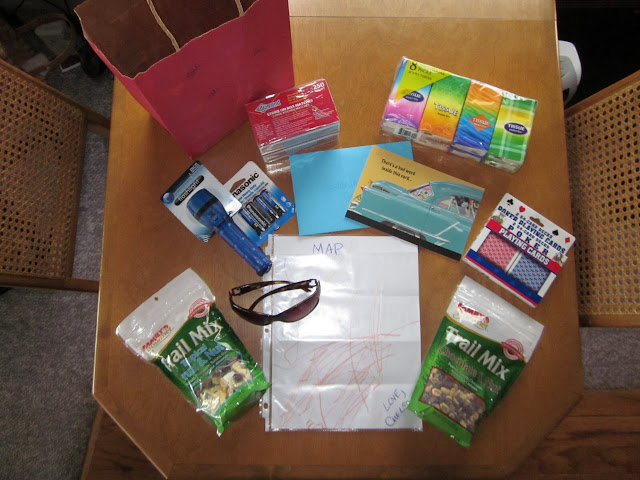 We had our MAP ....  the grandkids colored us a map so we wouldn't get lost... also they gave us:
- travel kleenix to cry with as we miss our grandkids
- a flashlight and batteries so scare away the boogeymans
- matches to start our campfires
- 2 decks of cards to play cribbage and rummy 500
- some trail mix snacks for when we are hiking on trails
- sunglasses for the enjoying the desert sunshine
- and a really really funny card that made me CRY!


We headed south and saw less and less snow.... about 200 miles later we were ready to cross into Illinois.  There are toll roads by Rockford, and with four axles now towing, we prefer to avoid tolls.  We knew a quick loop around through Shopiere and Clinton could bypass those tolls... and a stop to see our friends Juanita and Norm with the quaint little weaving studio called Vavning.    www.vavningstudio.com

We pulled up, but alas.. she was not there!   We left a little present under a hidden flowerpot and went on our way.   We were just asking for a "Drive-By Hugging" anyhow.  Have to catch her on the way back, I guess! 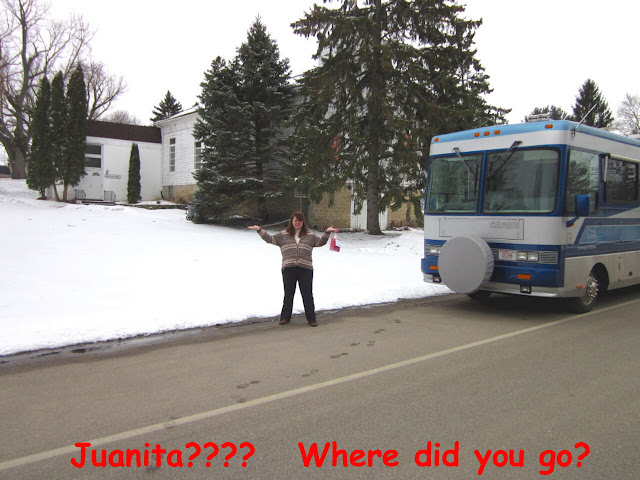 We flew on down the road, got back on the interstate south of Rockford and headed south.... I know I have mentioned it before, we are really "not" Interstate People.  We like the backroads and the quiet routes, commonly called Red Roads ... on the maps?   Well, for now we are willing to drive the interstates to get south fast....   out of the snow and the cold and the ice...


We drove past some interesting fiberglass characters, including a PINK ELEPHANT in Livingston, IL.   Yes, PINK ELEPHANTS!  So I had to take a pic for my mom... she loves PINK! 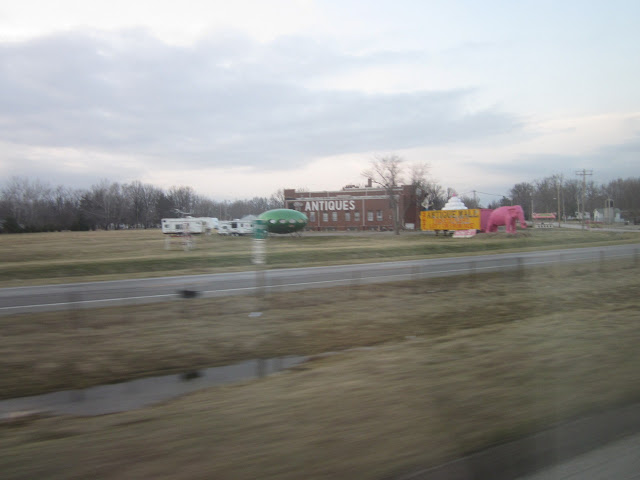 We finally crossed into Missouri at 6pm  and went over both of the Mississippi and Missouri rivers....

We drove as far as the Dardenne Prairie just west of St Louis... Fellow RV bloggers Sam and Donna

http://samdonna-5thwheelvagabonds.blogspot.com/
They offered their driveway for an overnight stop.  We were just getting in as it was dark (we HATE driving at night) and there was Sam... standing at the end of his driveway, waving a light frantically back and forth, and then showing us the way in... What a welcome sight!

We got settled in, unhooked the Tracker and visited with Sam, Riggens the Wonder Dog and Sadie Mae the Elusive Pupster.....   (and that grey thing is a long disemboweled play toy in my hands, being dragged off by Riggs who wants me to keep playing and not posing for a picture!) 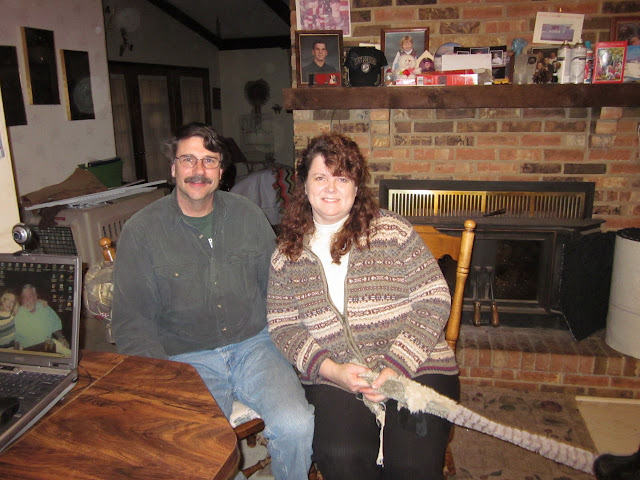 After jaw jacking for a while, Sam took us over to JJ's Restaurant where Donna was hard at work.

http://www.jjsofallon.com/
She was able to take a break and join us as we feasted on some delicious food!  They treated us to some of the best things on the menu, per Donna's recommendation.  Here is the obligatory restaurant pic of the food..... 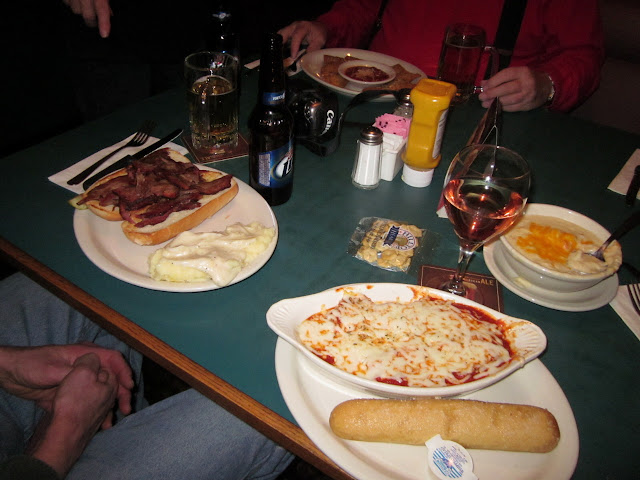 We toasted to RV blogging with our wine and beers....
I had the cannolli and soup (yummmmmm  but they served so much I had to take the rest home)  Steve had the beef brisket sandwhich, Sam had fried ravioli and Donna had a pulled pork sandwhich and baked potato.  Gosh it was GOOD! We even met her boss and then a fellow co-worked snapped this pic of us! 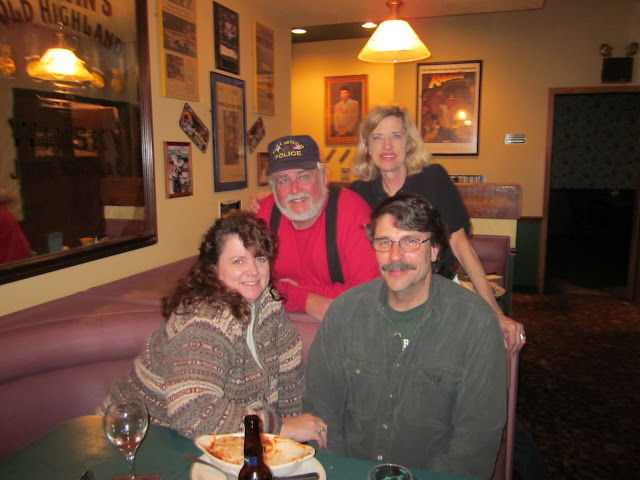 and US....    back row Donna and Sam, front row, Karen and Steve...
in case you might mistake who was who!
We headed on back to the house with full bellies and boy oh boy were we ever tired.  We crashed into bed and I think we were both asleep in ten minutes flat!