Ahhhhh the risks of living in tick infested Wisconsin. Yep, so far this spring, Steve has had three woodticks crawling on him. One of them happened to dig in it's nasty little head take a good bite. He didn't even feel it until later on that evening and pulled it out. He was pretty sure he got the head out, but that nasty little tick left a pretty big hole!!!

Sure enough, by the next evening, it started to swell and he started to get the big red patch around the bite. It was on his upper thigh but was not causing him any discomfort.

By Sunday morning we felt it was definitely infected and he needed to get into the Urgent Care. Look at that big nasty hole when I zoom in close with the camera. LOL (skip this picture if you don't like looking at that kind of stuff) 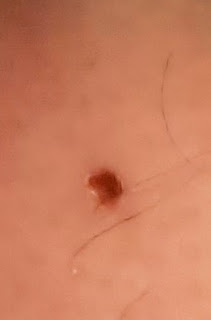 Off to Urgent Care we went, and he was able to see a doctor within just a few minutes. He is being treated with 10 days of Doxycycline. Topical triple antibiotic cream was applied for the first day. But because the bite has healed over, there's really not much sense in putting any more of that on.

If he experiences any type of fever, chills, or pain he is supposed to contact them back and we will go further from there. As for now, it will be treated just as an infected tick bite. We will test for Lyme's if he experiences any other symptoms
So we will keep an eye on him, but it doesn't bother him in the least.
On our way to pick up his prescription, we stopped to take a look at a Blackstone Propane Griddle. Our friends Janet and Bill Edwards had one when we camped with them last weekend. We had watched a few YouTubes to learn some of the versatility that these griddles can offer when we are camping. Also we can use it to cook outdoors while at home and not heat up the kitchen during the summer. So we looked them over and we turned our backs to walk away. Before you knew it, one jumped right into our shopping cart!

It was a beautiful day for a ride in the convertible, and Steve said there's just no way---- it won't fit in the trunk. We knew when we loaded our groceries in the trunk, it wouldn't fit.
But..... you know what happened next?

That big box with that new griddle hopped right in to the backseat! I guess it was going home with us???

Since the box hitchhiked a ride home, Steve figured we might as well open it up and take it out and check it out. He had assembled in no time flat.
We seasoned the cast iron portion with oil, this is an important first step. If anyone has ever used cast iron, you know that's important to take care of the griddle surface by seasoning, plus it also prevents rust.
We seasoned the inside cooking surface and also around all of the sides and back and bottom as well. We might give it a second seasoning by putting it in the oven and baking it for a while. We saw a YouTube on how to do that method. Today is too hot and humid to attempt that.

In the meantime, we decided to just griddle fry up a couple burgers. It sure was a nice little unit to set out on the picnic table. Then it can also be easily stowed away in the lower compartment of our motorhome when we take it camping. We only bought the 17-inch one burner unit. There's also a two burner and three burner version available as well.

It can run off the little one pound propane cylinders, or with an adapter hose off a larger 20 lb barbecue tank. Also on many RVs and motorhomes there's an external propane outlet to hook up extra propane devices such as this griddle too.
This kind of looks like a
happy griddling man.

Takes his mind off his tick bite!
Oh yes, did I happen to mention that a few accessories also jumped right into the shopping cart, along with the griddle? Now we have some new toys to use as we explore new recipes for the Blackstone griddle. 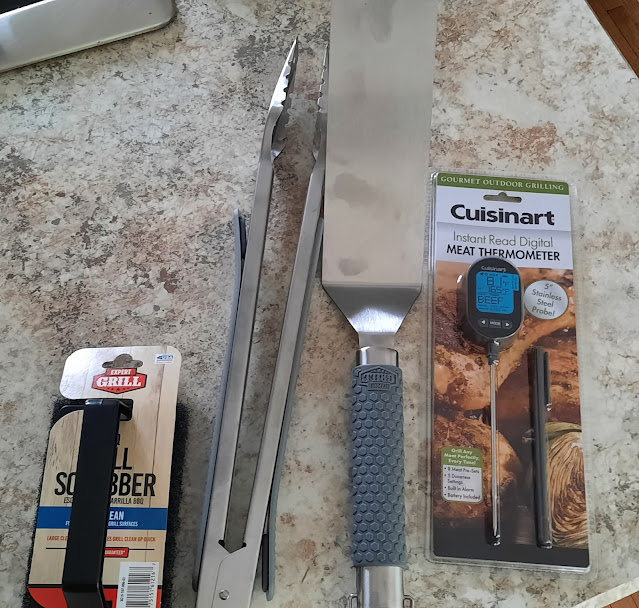 The temperature control is really nice and the surface heats up pretty evenly. Our burgers were delicious and tasty and done to perfection.

I want to try some of the stir fry recipes, and Steve wants to do multi part breakfasts,  and skillfully make all of the items finish at the same time.
If anyone has any favorite griddle recipes to share, please put them in the comments below. We have been watching a bunch of YouTube's with some creative ideas that we are going to try as well.

Remember on yesterday's blog post about draining our excess rain water from our backyard low spots? Well, Mister Steveio (who is always watching the Facebook Marketplace ads very closely) found some materials to help him in his upcoming project. We are on our way to get some used PVC irrigation piping that is worth about $700 if it were new. We are picking it up for 50 bucks and it will be a great help once he starts trenching out some of the low-lying areas. So that is what we are up to this morning.

I will finish this blog up with a heartfelt thank you on Memorial Day to all of our veterans who gave their lives for us. 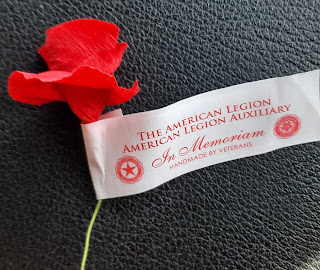 It is a sad day, but also a day of honor to remember them for giving their greatest sacrifice.

Posted by KarenInTheWoods at 1:01 PM