Well, we have an answer to our sweet little Finnegan's Eating Problem, and it's not good.

We had x-rays and more bloodwork done.  It seems our little guy has a huge massive tumor in his stomach, and it's probably on the spleen too.  There isn't much room for food anymore. Not a good prospect for surgery. The prognosis is grim. He is only seven years old. It breaks our hearts. 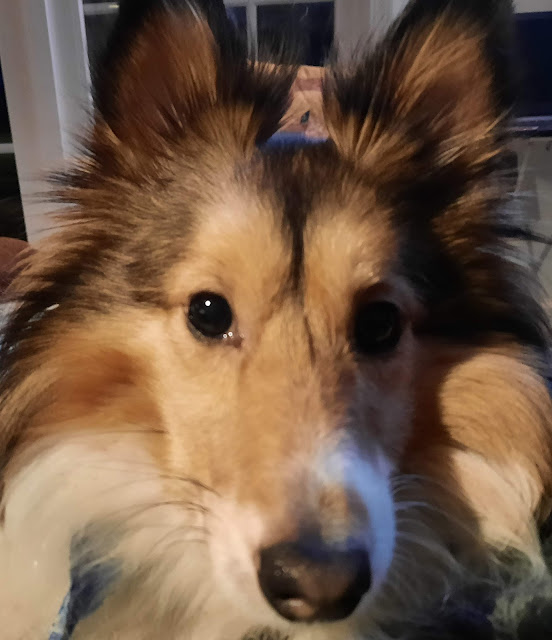 He is still active, seems normal and has full bodily functions, but he is sleeping more and more.

We will do what we can to keep him comfortable, and our final act of love will be done at home with a visiting vet.

The way he runs and and plays with Binney, you would never know.  He can be spurred into active fun, but then he goes to rest afterwards. This was filmed tonight:

That is all I can say

without bursting into tears

On to other things---

We had a delightful week of time with the grandkids who isolated and tested negative to spend time with us.  I will do a post about that later....

Well, seven of our eight special order replacement windows came in.  The shipping company or the store lost one somewhere along the way. It was one of the two dining room windows.  If they can't find it, they will have to reorder it.  That means another 6-8 weeks.

We were up at 5:30 a.m. on a frosty cold morning...  and went up to the Marinette Menards at 6 a.m. to pick them up at the special order door before any other people were around. We got 5 on the trailer and 2 in the back of the Saturn.  Then we came home by 7 a.m. and popped back into bed for a while.  Brrrrrrr~!

We decided the master bathroom window was the first candidate to get replacement.  With all of the air leaks, the moisture builds up between the main window single pane glass and the makeshift aluminum storm window.  When the temps get below 32, this window is all frosted up for the rest of the winter. 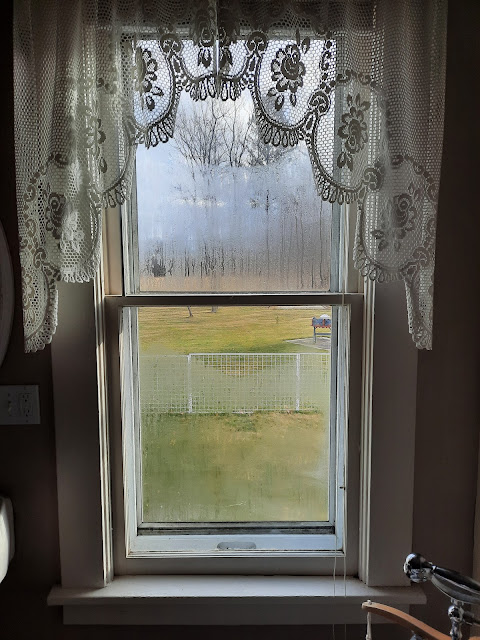 The previous owners, sometime over the years, just took cheap aluminum storm windows and fit them over the wooden frame of the old broken storm windows and screwed them right into the house with long 3 inch screws!  So they really weren't a proper storm window on this 100+ year old house. 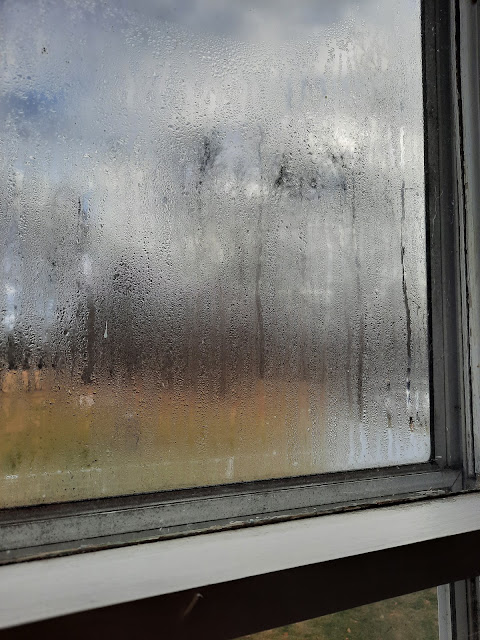 The regular inside windows were not in much better shape. In some spots, the glazing was totally missing and you could see the air gap right under the glass!  (by my finger) ACK! 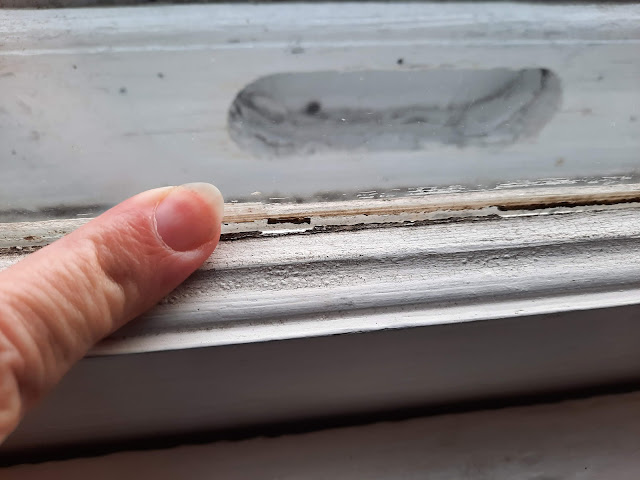 Steve decided after a few cups of coffee, we should gather up the tools and start on the first window today. Most of the work is done from the inside while the storm is still in place. We can always shut the doors to bathroom and keep the cold air in there once the storm is removed. 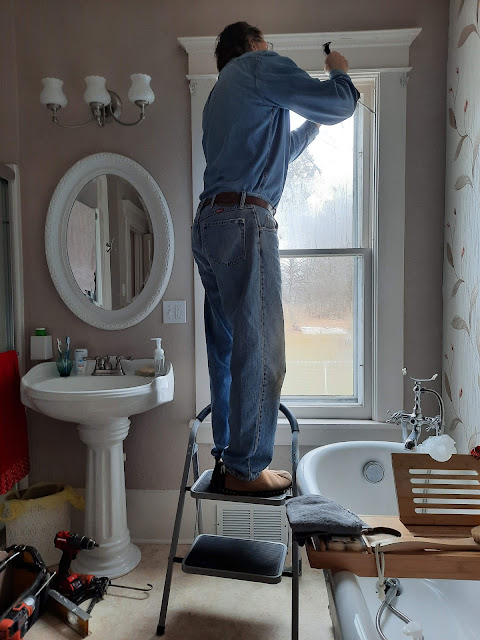 He was able to pry through the many layers of paint on the heads of the old screws that hold the the windows stops in place.  Then he cut through the paint around all of the edges too.  Miraculously, all three pieces of the wooden stops came free without cracking them! Yayyyy that means we can reuse them for the new windows!  Imagine that, the bare wood in this pic has not seen the light of day in 100+ years.... 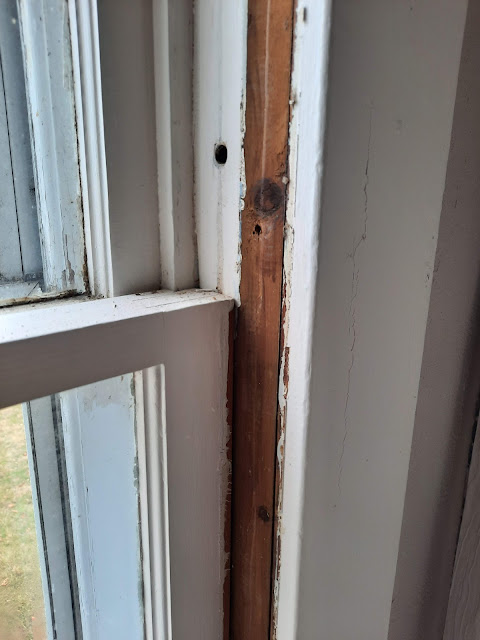 Here are the nice new thermopane windows with UV coating, Low E glass with argon gas and nice latches and they tilt inwards for cleaning.  We had custom ordered them all back in October, and it will be so nice to have them in soon.  We got a few quotes from window installers and decided we would save the money and do them ourselves. 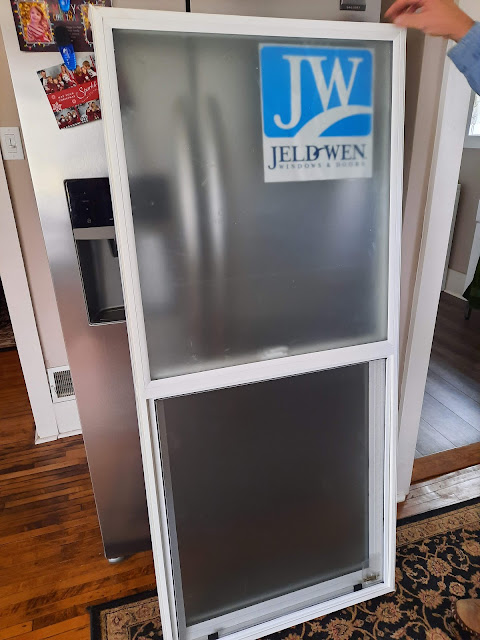 Of course, the dogs had to be in the middle of everything to see what was going on.  They think they are "helping" and try to find out what each tool does and if it included belly rubs. 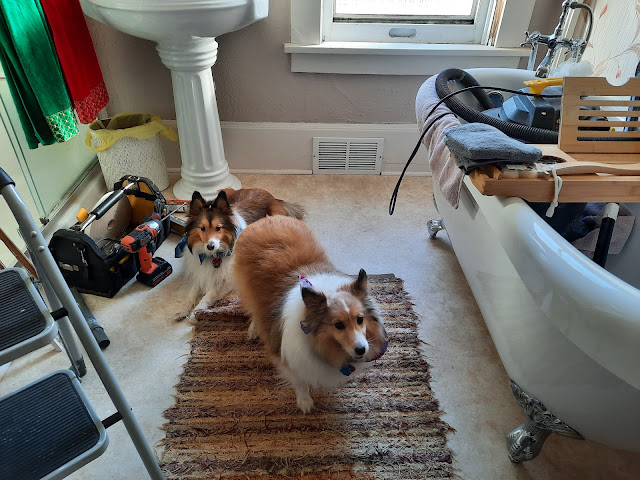 Once he got the inside windows removed, now he needed to get that big makeshift storm thing off the outside.  He got five of the six huge screws out of the wood, but don't ya know, one was stripped and he had to use a pliers to hand turn it out.  All done while balancing on the ladder outside.  Plus, once he came back in, only to find there had been a thick bead of caulk put in all around the frame that he had to cut away in the process.
For this task, he used his little oscillating tool and a flat blade.  He was able to cut out the caulking and not damage the wood too much. I will touch it up in the spring with fresh paint on the outside. 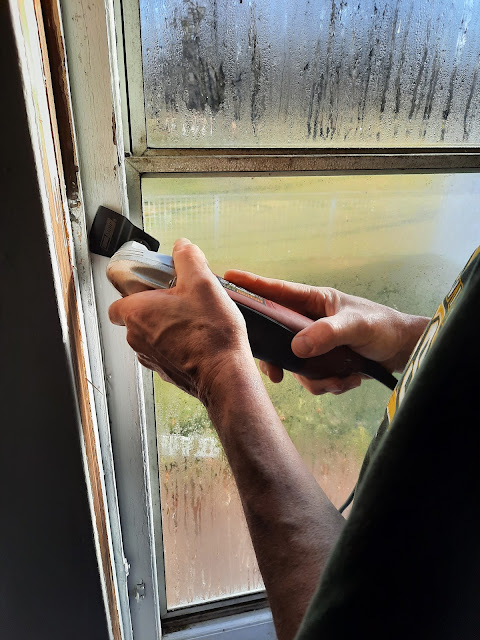 When he uses this power tool, the goofy dogs go nuts!  Mainly Binney, but she gets Finnegan all wound up in the process.  So I had to secure them down in the She Shed where they could stay out of mischief and wait until Steve is done. 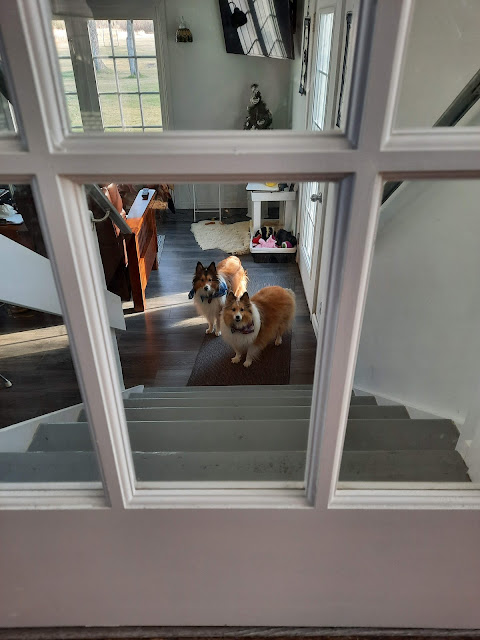 While Steve was busy making a mess, I stand by with the tools and wiping rags, and best of all, the shop vac.  I would rather do 5 or 10 little clean-ups as the job progresses, than a big mess at the end.  Then the paint chips and wood shavings are not tracked through the house as he goes in and out to do things on the outside.
Workspace was at a premium, so I plopped the shop vac in my claw foot tub! (on a towel for padding) so I could just plug it in and take care of the messes as needed. 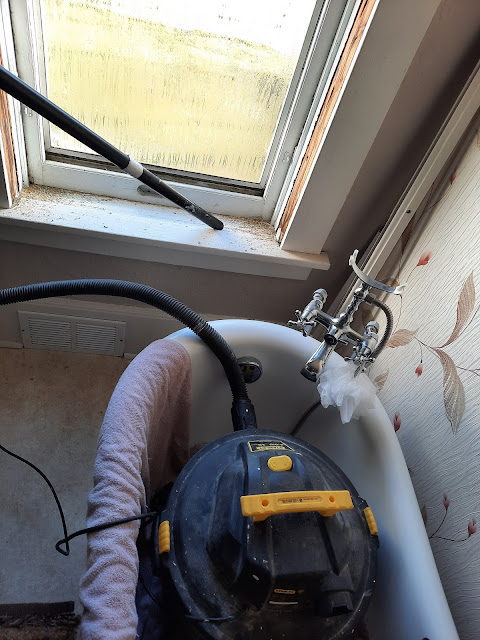 He finally pried and pounded and got the crazy outside wooden storm frame off the window casing.  Whew!   We will do the touchup work in the spring, but at least he got it out and cleared away. 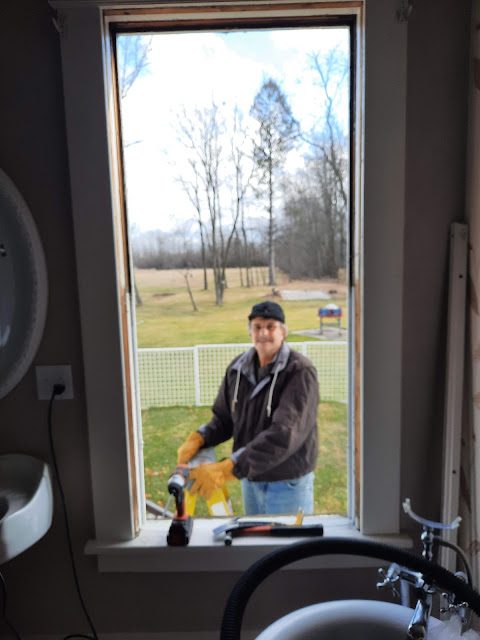 The new replacement window fit into place very well.  Steve shimmed it up to be level, plumb and square.  The difference was amazing, and no more frost! 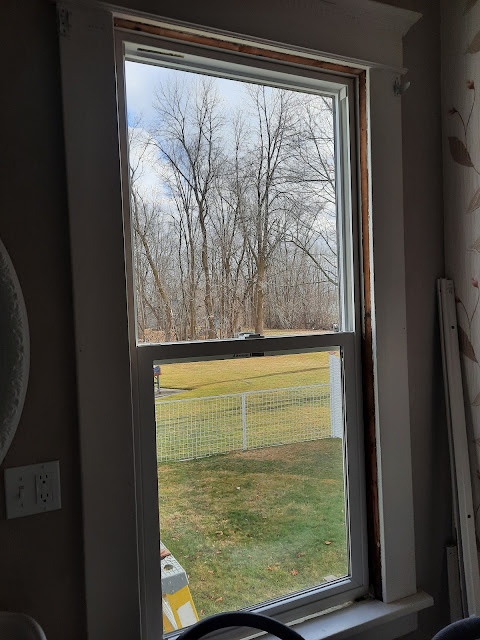 He made sure it was securely in place, and then went outside to add a layer of silicone to the edge to prevent any future water intrusion. 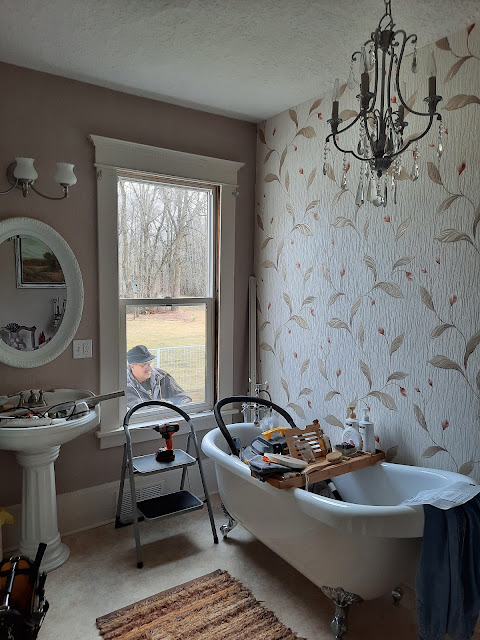 From the inside, he filled all the gaps with a non-expanding foam sealant, and then added the original wooden window stops back into place.  There is a slight difference in thicknesses of the old window to the new one. so I will touch up the paint on the trim later. 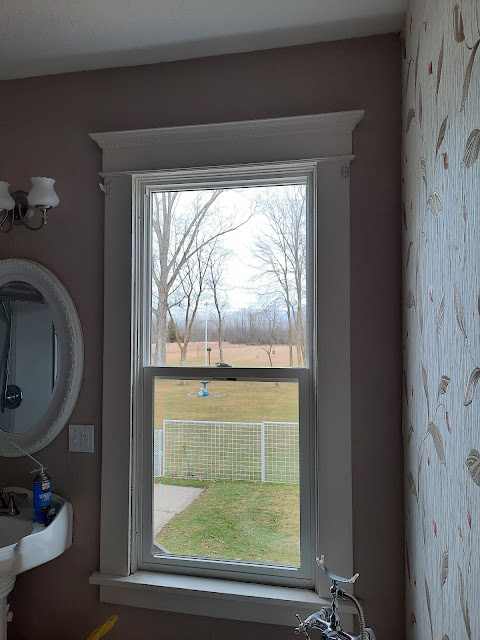 NO MORE DRAFTS
NO MORE MOISTURE
NO MORE UGLY STORM WINDOW
I hung some of my Heritage Lace curtains back up for now, but I am thinking I would like to get some nice white wooden plantation shutters in the future.  I looked them up and they are quite pricey, (over $100 a set)  so for now this will be fine.  I might find some at the REstore or on Facebook Marketplace. 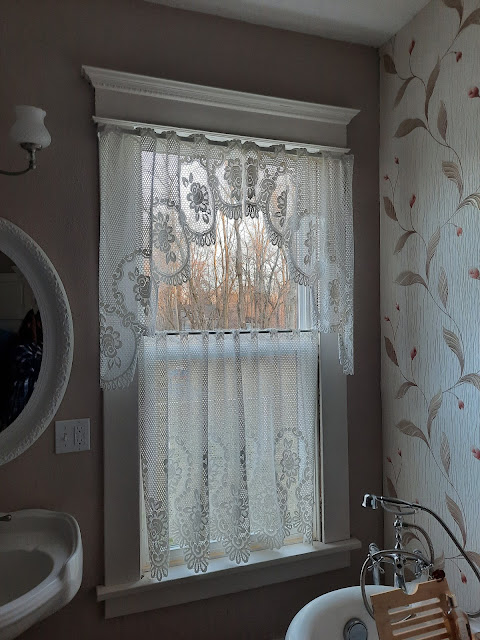 It sure made a difference

and looks much lighter and brighter.

Tomorrow... the Master Bedroom window, that is the next in order of severity which is needing replacement. It will make a huge difference in our heating and air conditioning costs as well.

As for tonight, I am going to go and hug my dogs...

Posted by KarenInTheWoods at 6:38 PM