New Set-Up for Our Towing and Braking

Now that the siding is done on the North side of the house, the weather is looking awfully nice for this week. We decided perhaps it's a good time to go camping.

They are quite pricey, the entire auxiliary braking set up is in the $1,200 range. But fortunately for us, our wonderful children just bought a used motor home last year. The seller included the complete set up for towing a vehicle behind it, which they have no interest in doing. So that darling daughter and son-in-law of ours had a braking setup they weren't using.  They said "take it"!

It's a Roadmaster Even Brake unit which is quite popular and quite reliable. We know many others with the same unit and are happy with it.

Steve spent a couple hours just watching YouTube videos on all of the ways to set it up properly. He printed out the instructions from their website, and he even called Roadmaster themselves to ask a couple questions. What a resourceful guy using his due diligence in setting this up.

There are several senarios involved in setting this up, depending on the how your vehicle is wired. He chose the one that best suited our needs and for what we were doing. 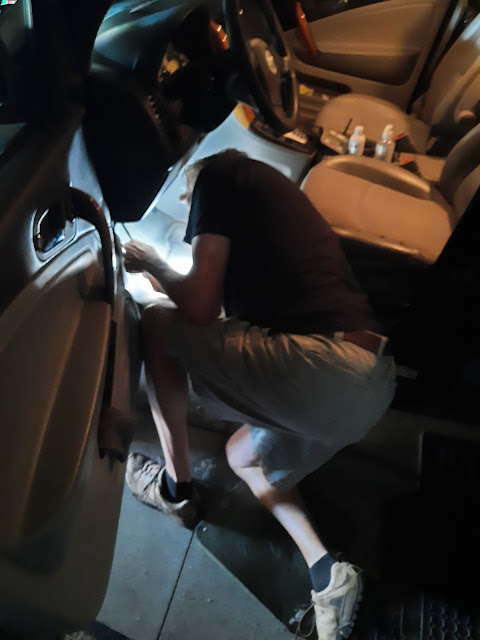 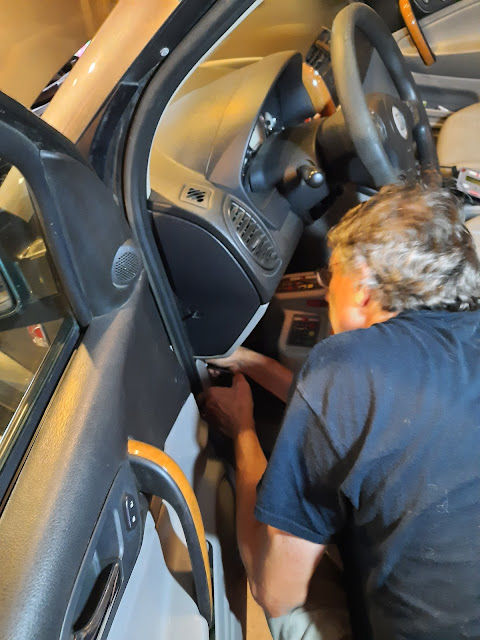 It took him most of the day and also into the evening hours before everything was set exactly the way he wanted. I came out and did the final help with the adjusting and to watch him be successful in his efforts. I am his cheerleader.

Here is a little video clip of a going through its test procedure:

OK so that was only half of what he worked on yesterday, the other half was the tow bar itself...

When we bought the Saturn, the seller said it was a Blue Ox tow base plate already attached to the vehicle. Hidden inside under the bumper. Also the wiring inside was addressed with a switch on the dash to disconnect certain things in the fuse box ... to prevent it from running down the battery while being towed.

Once we got the Saturn home and looked closely at the connection ends with our Blue Ox tow bar, we realized that rut roh.... the base plate wasn't Blue Ox, it was a Roadmaster brand!!!

That's OK, we could get an adapter bar that ran across the front of the Saturn that would convert it from Roadmaster over to Blue Ox.

The only problem is that if we ordered it, it would take 2 to 3 weeks shipping and even then, it's kind of a like an adapter and not a direct connection.

But but but ---- back to the rescue again, our wonderful children had a Roadmaster towbar given to them along with the Roadmaster brake system!

Now we can either save our Blue Ox, sell it, or swap back if we ever decide to change to a different vehicle base plate again.

But in the meantime, our kids GAVE us the entire tow bar set up to attach the baseplate to our Saturn! That is another $1,000. Ack!

I think we owe them extra baby sitting and dog watching, don't you???


Steve fiddled and played around with all of the geegaws and doodads on Monday. I was feeling a bit under the weather so I stayed inside. Finally he said he had everything figured and adjusted and handled correctly.

Looks like I need to hop in and tow  Steve down the road doesn't it? 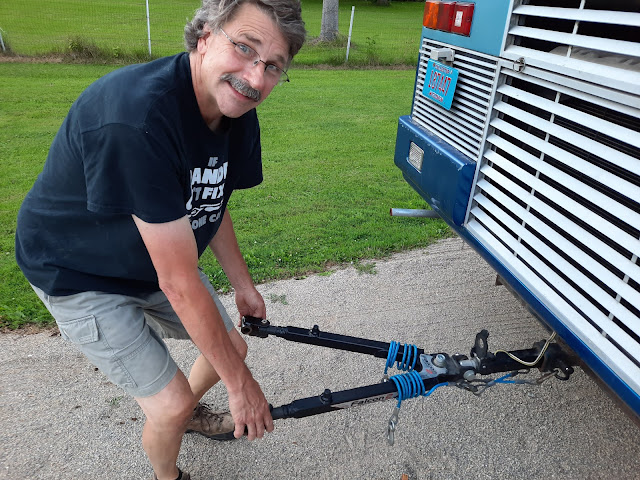 He went to bed last night with a happy smile on his face because he knew that today, being a beautiful day, we were going to load up, hop in, and take off!


This morning, we put the motorhome out on the street in front of the house, and hooked up the Saturn.  We carefully went through all of the procedures and steps for getting the tow bar hooked on correctly, getting the lights set up correctly, double checking everything, and then setting up the Even Brake system. 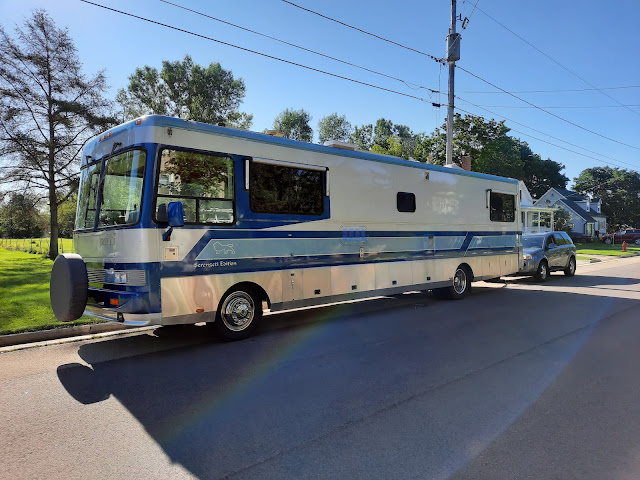 All hooked up and we even put all of our little padlocks and place. That is so nobody comes by and unhooks anything if you are stopped somewhere. Bad people play horrible pranks and it's been known to happen... 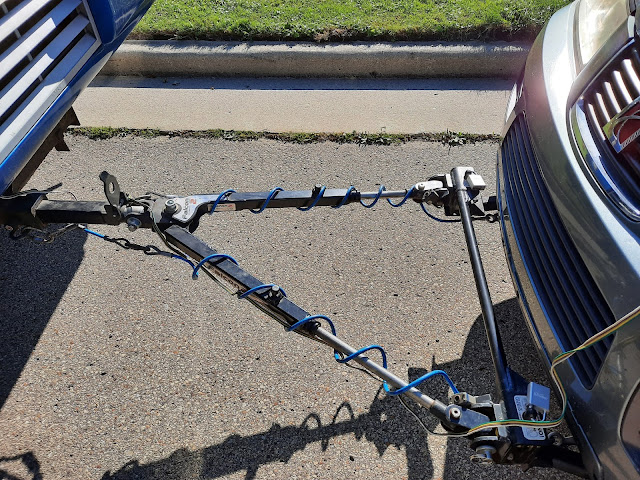 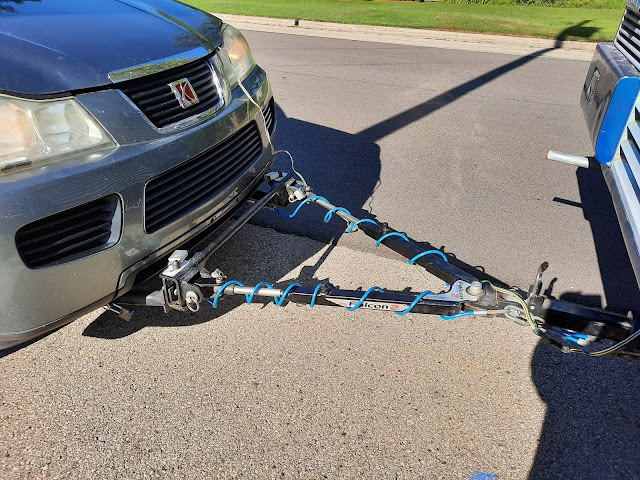 We ran it through a test and everything performed perfectly. 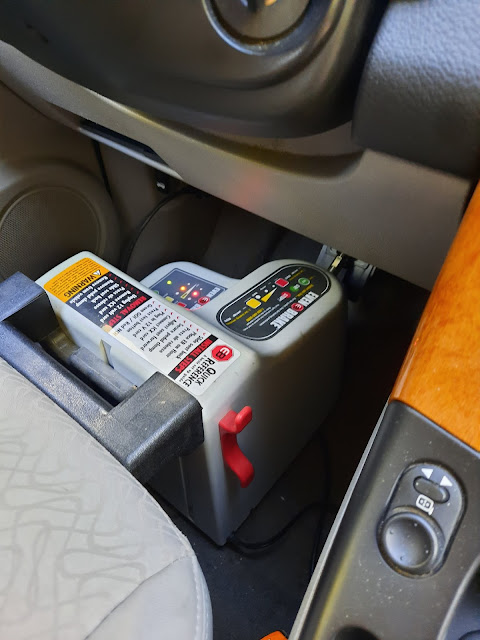 We were ready to go. We tossed the dogs in the motor home, along with our groceries and some clothes. It looks like we are heading out for a couple days...

I rode the 1st mile in the passenger seat of the Saturn to watch the Easy Brake function when we got up to the stop sign on the curve. It worked perfectly!

Then Steve let me come back in the motor home and from there we continued our ride North.

We have a rear facing camera so we are able to watch the progress of the Saturn as we turn the corners. We also keep a white cloth clipped to the top dead center of the steering wheel so we can see that the steering wheel returns back to the stop center position after going around corners. That's a very handy thing to do, and it makes it easier to see the steering wheel against the dark interior.

We stopped in Peshtigo to fuel up our propane as well as our diesel fuel... because both were getting a low. The Eagle Express truck stop had bulk propane, so we can do everything at one stop.


As an added P.S., we set up four mouse traps in the motor home. We didn't catch any mice at all. Nor is there any new evidence of mice doo-doo anywhere inside. So hopefully the ones that came to enjoy their vacation stay while it was at the Oconto Truck and Power Center, had decided to move on before we brought it home?

We got our final bill for the repairs of the injector actuator pressure switch replacement, along with the diagnostic charge and labor and some diesel fuel and repairing a couple broken wires. $508.00

We were quite pleased and tipped him extra and rounded it up to $550. He had gone above and beyond to help us out, even giving us a ride home after the tow truck dumped us at his shop. Thank you again Nick Badendick for a great repair job.

And I should also mention thank you to Leah Burg and her assistant Stephanie from American Family Insurance of Chilton. That's who we have our roadside emergency towing added to our normal motor home policy. We also carry an extra rider for interior contents above and beyond the basic $500 limit. Not only did they make sure we were safe and towed with adequate equipment, but they were able to quickly return the fee charged erroneously charged by the towing company. That was a miscommunication between the tow company and American Family to have us pay up front. They said we would be reimbursed later from our insurance company. American Family said no, the tow company was incorrect and that they were not supposed to collect any money from us up front. Either way, they got our money returned to us which was only a $390 fee. It could have been much much much more to tow a motor home that size for 90 miles. We were very pleased with the service and the tow company as well as American Family. They straightened out their miscommunication between the two of them, and we were made whole again.


Okay.... we are at my FAVORITE CAMPSITE now,  we drove ahead in the Saturn to make sure it was available. 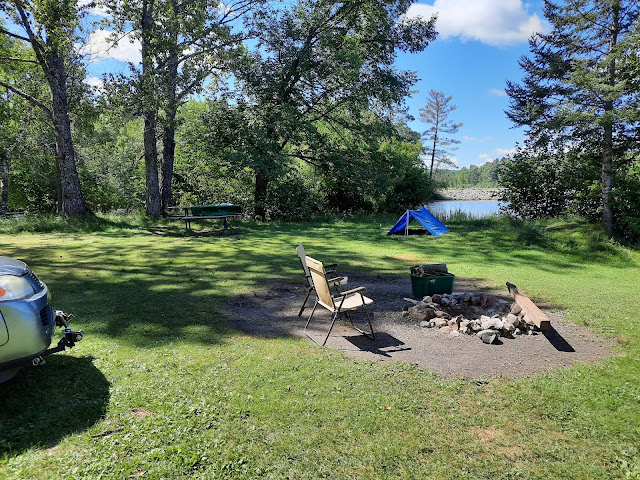 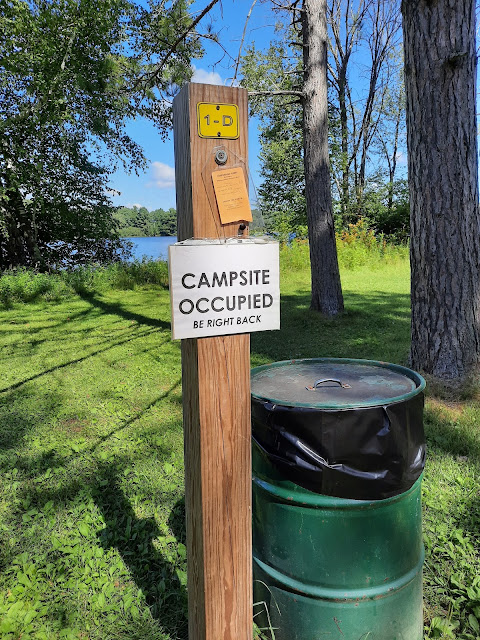 We pitched a little tent,  set out some lawn chairs, firewood,  and paid for two nights. 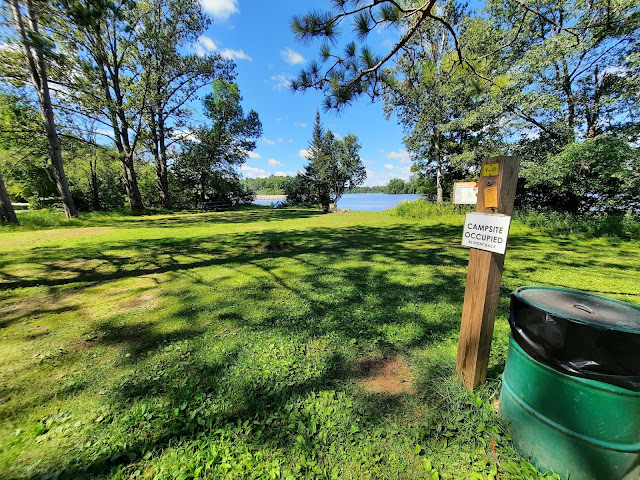 Now to buzz back and get the motorhome where we left it back in the main highway. Saves us 60 miles round-trip if it had been occupied by someone else.


Posted by KarenInTheWoods at 11:51 AM