A Day With Grandkids Before Going Camping


We are loading up the RV to go camping on Monday. Rather than battling with the Weekend Warriors, us retired folks can take advantage of the nice quiet campgrounds Monday through Thursday. We're not sure where we're going yet, maybe head up along the Michigan Lakeshore and check out a couple of the campgrounds, till we find a place we want to be?

Their daycare center closes up twice a year for a single day, to do a thorough cleaning and reorganization.  Friday was such a day. Parents scramble to find alternative care situations. Fortunately for these three, they got to come to Grandma and Grandpa's house. The means coming over at 6 a.m., their normal drop-off time at the daycare.  We set the alarm clock for 5:45 and soon they were tumbling in the door!

They really enjoy coming here, and our first task was to make a breakfast buffet. That is at their request. We fill up the island with all different choices of things for their breakfast. Ranging from fresh fruit to dry cereal to juices to applesauce (with sprinkles) and hard boiled eggs. It makes for a fun breakfast time, to sit around the table and talk, get caught up on what's going on in their busy lives, and everybody gets to basically eat what they want. 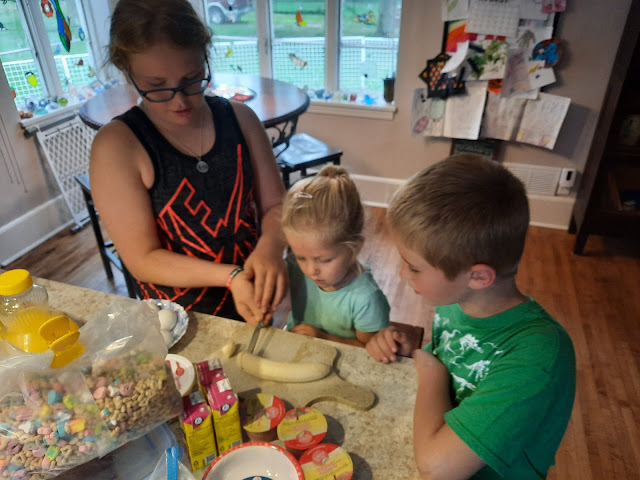 After breakfast, we planned an outing to go for a little hike through the Nature Preserve located behind our home. The rain clouds were threatening to let loose but we thought we would quickly get on our shoes and head out the door before it began.

Here is Clayton helping his little sister Claire get her shoes on. I love it when everybody cooperates and works together so we can get a move on. That's how nice it is when you got kids that can behave and get along with each other. 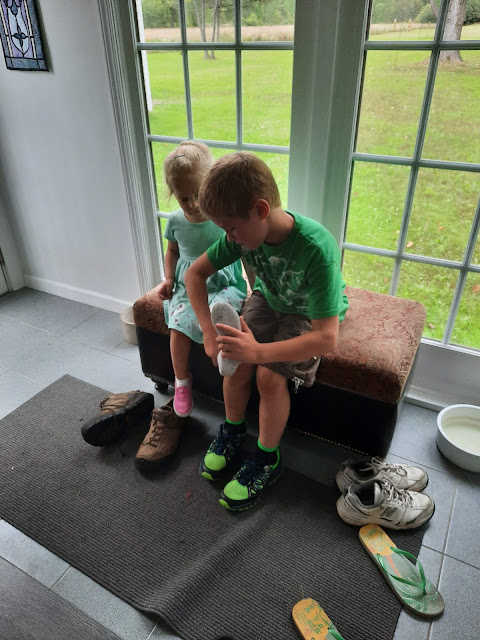 Here we are getting ready for a little hike. First we sprayed down everybody's ankles and legs with mosquito repellent, because not only are the mosquitoes pesty, there has also been an influx of ticks and chiggers recently in Wisconsin with the unusually warm weather. 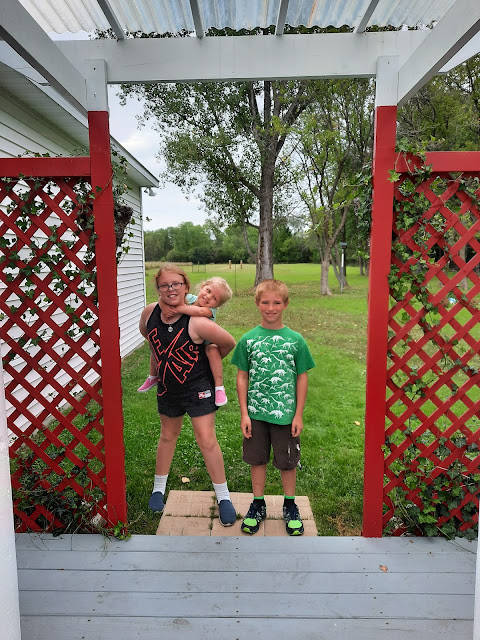 Here is the sign at the entrance to the Nature Preserve. It is owned by the Northeast Wisconsin Land Trust. They have some future plans for developing better walking trails and a parking lot area. Honestly, I like it just the way it is. It's rough and rustic and protected so there will never be any development back there or any selling off of the land for future home building. Beyond that is a big swamp marsh that is owned by the Department of Natural Resources. Beyond that is a county road and then the bay waters of Green Bay leading out into Lake Michigan. That means our backyard will always be natural. Not many people even know it's there.  Good for us---- 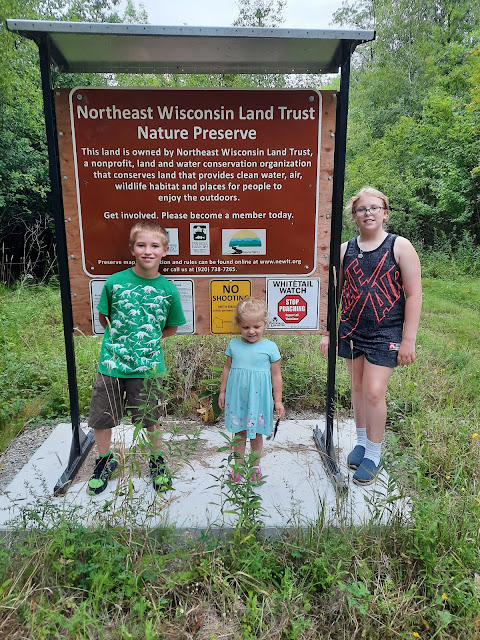 Right at the corner entrance to the preserve, our neighbor has this adorable little cement deer statue. The kids always have to stop and pet it and talk to it. From time to time, on various holidays, he decorates it. Wonder what he's going to do on it for Labor Day? 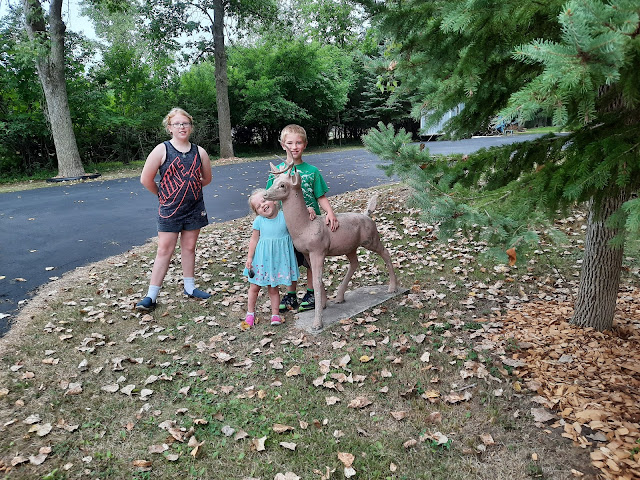 The trails are wider open at the beginning of the nature preserve, but after you get beyond this point, it gets a little narrower and harder to follow. As we walked along we felt a few different raindrops here and there and we knew our walk might be cut short. 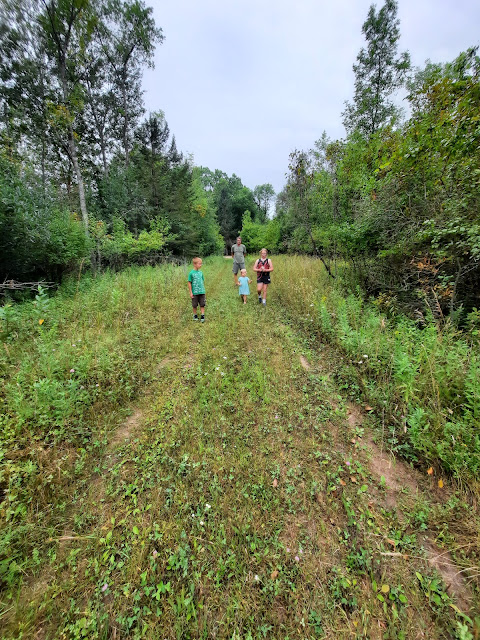 There is a remaining foundation of a big barn that had been burned down back in the 1930s or 40s I think. The kids call it a "Castle" because of the rows of little square shaped window openings that look like ramparts of a castle. Clayton went inside to peek out from one of the openings. 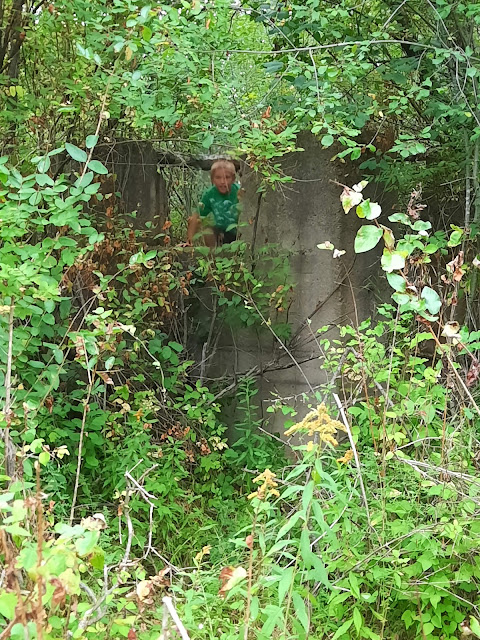 Steve took the picture of this colorful group of hikers out on a quiet Friday morning. I think we represent every color of the rainbow.  Claire found a big feather she played with for the rest of the day, and Chelsea picked me a bouquet of wild flowers. 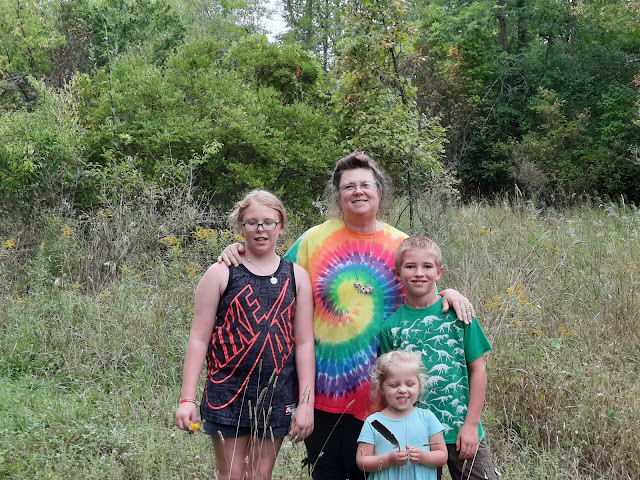 Not too long after that, the rain started and we needed to trek back indoors for the rest of the morning.

I put little Claire to work wiping down the entire kitchen window sill, after she carefully removed each of the blown glass paperweights. She is such a good little helper and tries so hard to keep up with the big kids. She would rather "help" me with projects than play with toys! 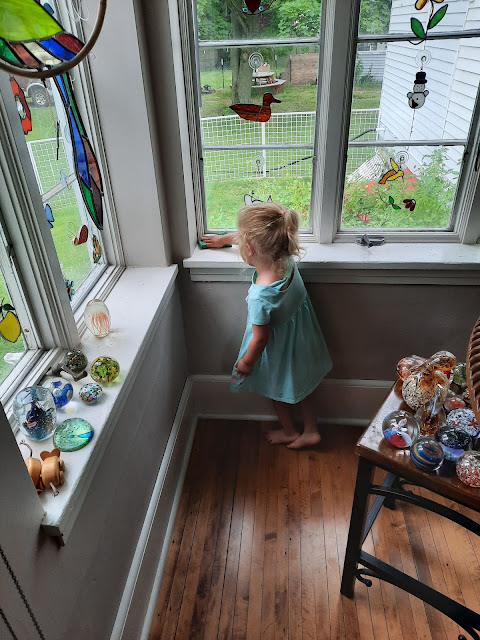 As for the big kids, even though it was drizzling rain on and off, Grandpa put them to work washing off the Saturn. It's still had a lot of dirt and grime on it from the weekend before. What fun for them to get out the brushes and soap and the garden hose. Grandpa said they spent more time trying to spray each other with the hose than taking turns scrubbing the actual car. Who knew? 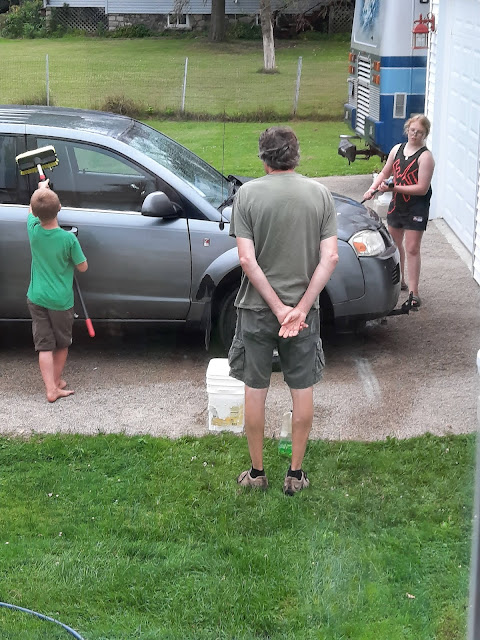 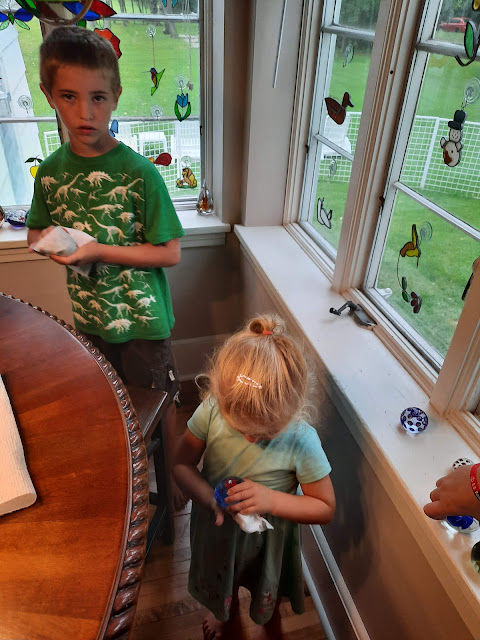 Bit by bit they got all of the paperweights back on the windowsill. I have been collecting them for years now.  Sometimes at a thrift shop, sometimes from antique stores, sometimes I get them as gifts. Up above those,  I have stained glass suncatchers on the window. It makes for a colorful corner in the kitchen and something to look at when we sit at the table and have our early morning meals.  When the sun is shining, it's soooo colorful! 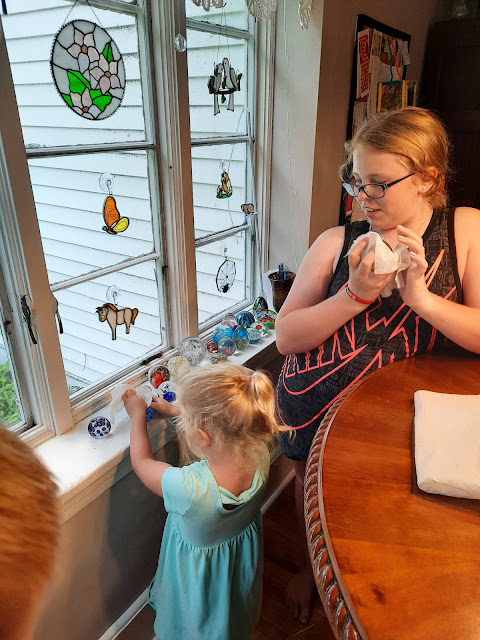 The rain let up a little bit so the kids went out to harvest some tomatoes for me. I've been getting about a basketful a day. What great helpers to harvest for me. 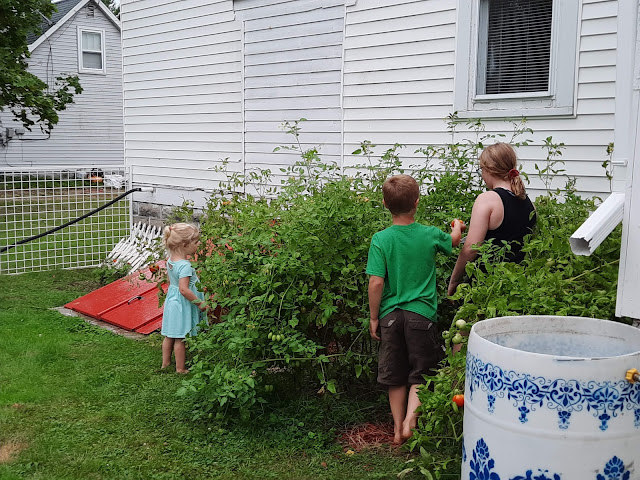 I have been canning them up as quick as possible. I've been running out of canning jars so I did freeze some quarts in zip lock bags. I don't have a lot of freezer space, so I needed more jars. But my thoughtful son-in-law Waylen found jars available on sale at Menards yesterday, and brought me two cases. I think I'm good to go again? 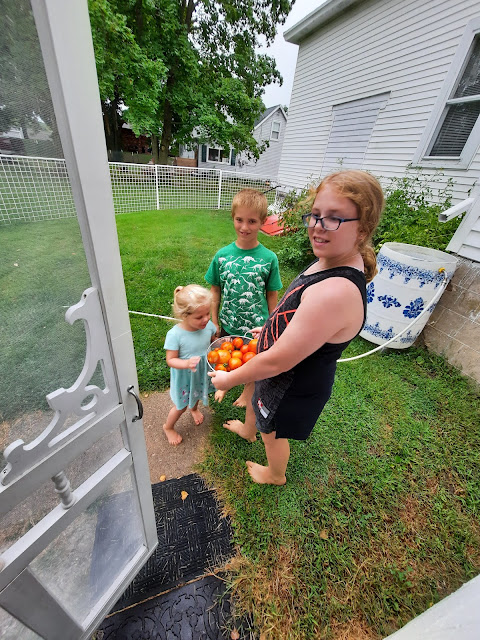 The rain continued on and off all morning. That was fine with me. We have been bone dry for about two weeks. It seems that like every storm that was coming across the state of Wisconsin would split in half. Part of it will go north of us, and part of it will go south of us, and work right around us out into Lake Michigan. We were getting missed every time! The lawns were starting to turn brown. My rain barrels had been empty for too long. I hate using city water on my plants. So now the rain barrels had a chance to fill up again.

Chelsea was busy at the sewing machine working at projects. While she was doing that, Clayton and Claire were doing a little bird watching out the back windows of the she shed. Those are the Doggie Ottomans for them to sit on, but work great for the little Bird Watchers too.  I love this pic! 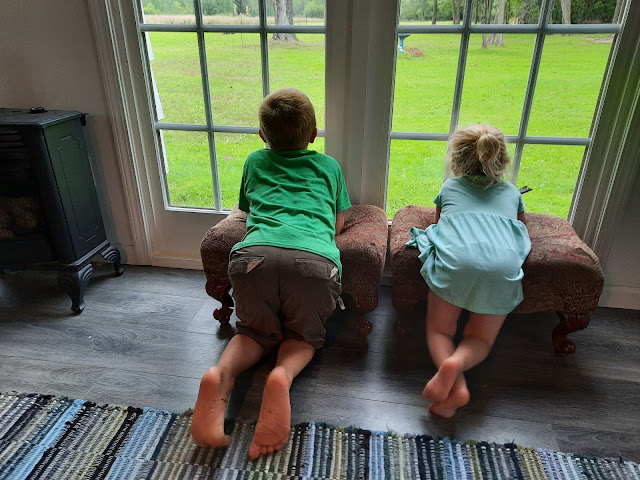 I just love their curiosity and inquisitiveness about the birds. By watching with the binoculars, they can look at them up close, while the birds are at the multiple feeders we have hanging in the backyard. Later in the evening, the deer come and hang out too. 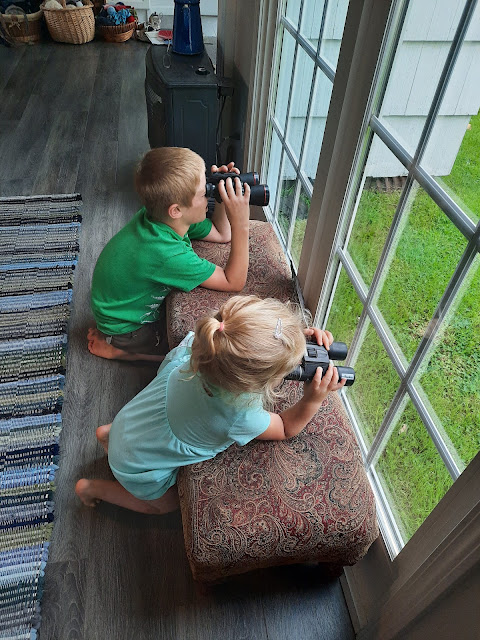 Little Claire decided it was time to play a couple games of Yahtzee. So I stopped my sewing projects with Chelsea to get in a couple games with the little stinker. 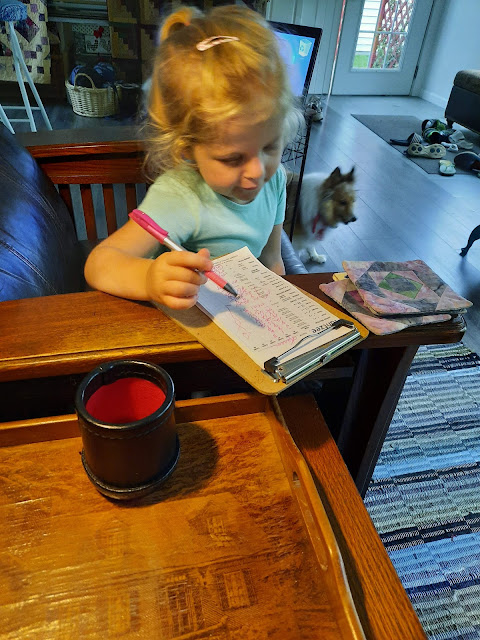 Can you believe she got two yahtzees?!?! 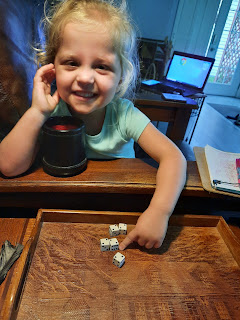 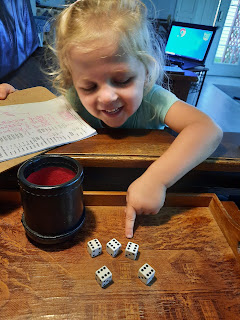 She likes going for yahtzees more than going for small straight, large straight or full house. I think the yahtzees are more exciting. Plus they all match! Each time she wins a yahtzee, she insists that she builds the dice up into a little pyramid that she calls a "birthday cake". Why, I have NO idea....

Chelsea had made this beautiful abstract type painting at the daycare a couple weeks ago.  It is painted on a recycled 12 by 12 ceiling tile as her canvas. I had seen her working on it, and I asked her about it, if she was planning to hang it at her house or if we could possibly hang it up here at our house. I felt it showed such an unusual way of painting the Bumblebees. Plus, it matches my favorite shirt! 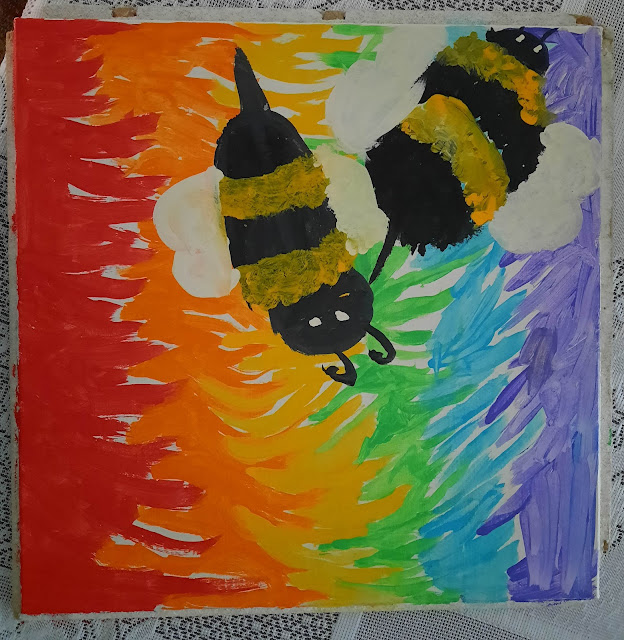 Chelsea was busy busy busy at her little sewing machine. She got it for Christmas last year and brings it over here to work on projects. She decided to sew little makeup bags for each of the teachers at her daycare center. Some of them are leaving now to go back to college, and some of them are staff that had been there for many years. She sewed and sewed and sewed. She was able to make up 12 little bags to bring over to the daycare that afternoon, when the teachers were all done with their cleaning and reorganizing. Each little bag has a zipper, box pleat ends, and is lined inside. I'm quite proud of her and helped her with some of the top spots. But mostly she sews them all by herself. 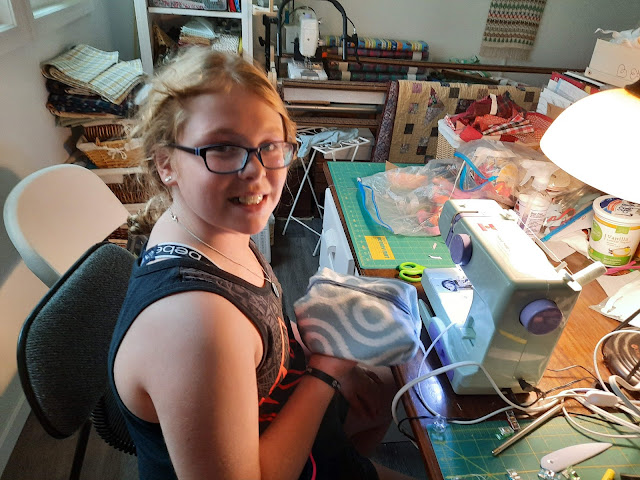 Before lunch, it was time for all of us to don our little aprons and get to working on a treat for later that afternoon. The old standby favorite at our house is rice crispy bars. 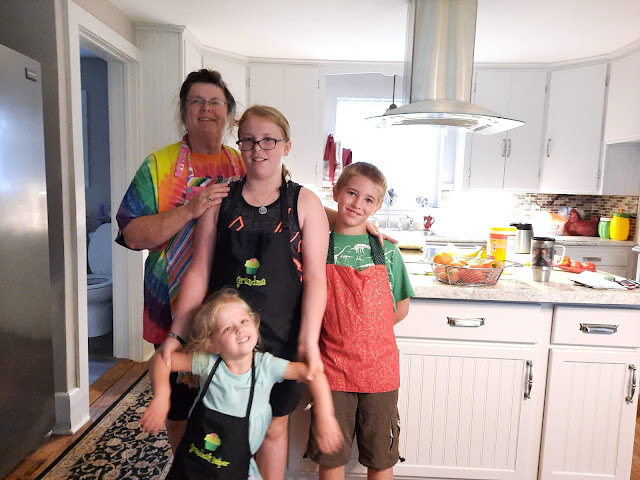 Everyone takes turns helping out. 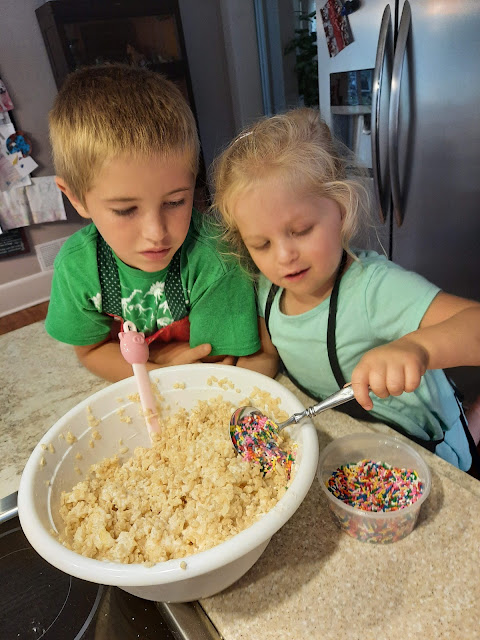 Of course, we have to add sprinkles to them each and every time. 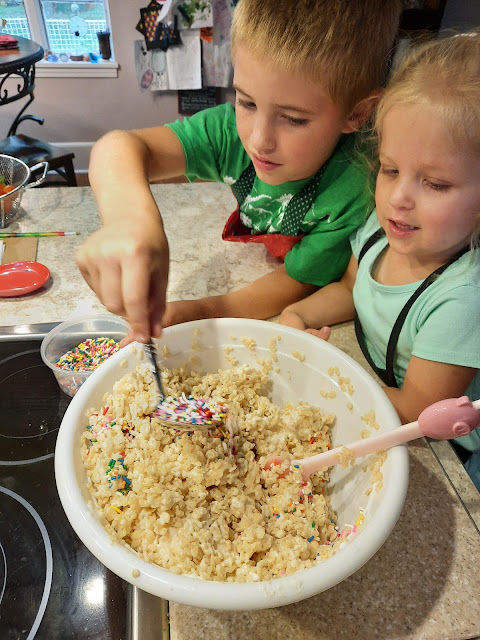 The sprinkles just make them taste so much better,
as well as make them colorfully fun to eat. 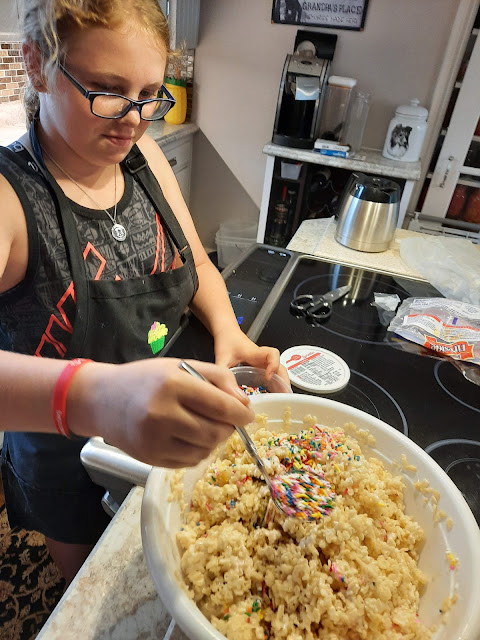 And when we are all done, it's time to lick the spatulas. We had to bring out extra spatulas just to make sure there was enough to go around. I remember when I was a kid, we would be so worried when Mom would be cleaning out the bowl to fill the pans with whatever we were baking, whether it was cakes, cookies, pie filling or whatever. We always wanted to be sure there'd be some left in the bowl for us to take turns scraping out and eating. We never heard of botulism from raw eggs out of cookie dough back then. None of us died. But from that lesson, I've learned that I have to always leave more than enough in the bowl so everybody can have the satisfaction of having a little bit on the end of their spatula. 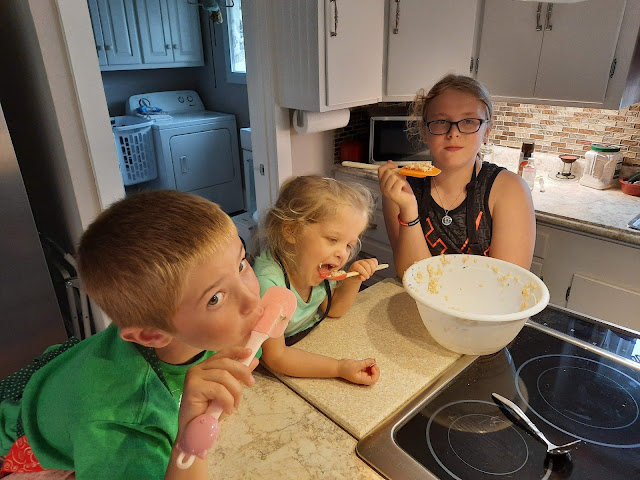 Pretty soon it was time for little Claire to lay down and take a nap (with me too). Chelsea was going to do some tablet time watching some YouTube, and I took Claire up to the bedroom for a rest. This is when Clayton and Grandpa sat down to whip out a couple more games of Yahtzee between the two of them. Clayton is quite the player, quick and adept at math, and very often he is the winner. 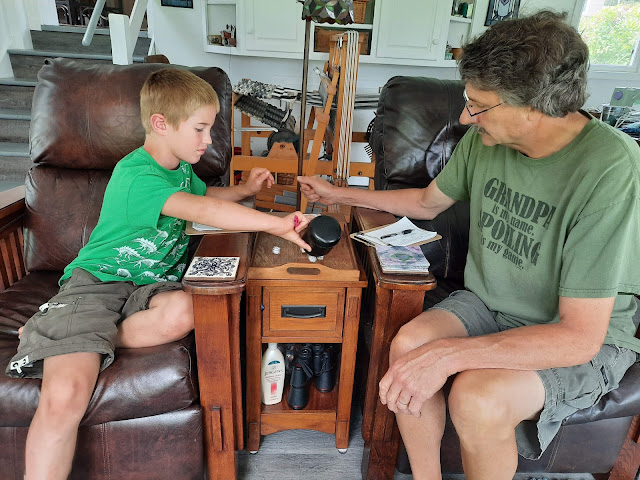 Pretty soon everybody is up and at em, and back together to get their gear organized because they were getting picked up by their parents. Projects were completed, toys were picked up and put away, dishes were done, and hugs were given all around....


After a long day,
they are gone.

The house is quiet.
Too quiet.

Posted by KarenInTheWoods at 10:57 AM