MOTORHOME MODIFICATIONS - *M* is for Muffler and Museum

So here it goes, we are up to the letter M now!

Muffler:
A while back (2009) our motorhome was getting a little louder and we realized that the salt on our Wisconsin roads is tough on vehicles.  Just look at where the muffler is all rusted out.  It was rusting around the holding straps where the salt gets trapped, even after we rinse things off from a snowy winter road drive.  Bummer, eh?

We called around to a few Cat truck and parts places for a new one, and they ran in the $350 range!   So then we called our local CarQuest auto parts in our tiny town.  He was able to order the exact same muffler for us for only $170!~

Next he had to special order another part leading up to the muffler. It was the big snaky 4 inch diameter pipe and flange made up at a local exhaust muffler company.  That was more expensive than the muffler!

A fellow Safari owner just supplied me with this information:
Donaldson p/n H000349
for the 2 muffler hangers/straps/bands

Once all of the parts were in, it was time to head out and do some work. Steve does the hard stuff, and I am the tool gopher and picture taker.  Some of the work was able to be done from up above through the bedroom, where we can access the engine compartment.

Lucky that our king-sized bed lifts up for easy access to our engine compartment.

The old parts came out surprisingly well and in no time Steve had the big snake part bolted up into place.  We both crawled underneath so I could hold up the muffler while he bolted the straps tight to hold it.  It lined up really well, so Steve's measurements were correct on having East Side Exhaust make up the part from his drawing.

Here he is finishing up the job by hanging on the tailpipe. We were able to reuse the original tailpipe as it was still in good shape.

This is what it looks like from up above looking down from the bed compartment. See why he had to make a special piece that needed someone flexibility to reach down to the muffler area?

Whew… good job all done!    And now our Cat is purring along nice and quiet!

Yesterday was a pretty busy day for us. We volunteer our time at the Calumet County Historical Museum. Steve is also a member of the board and helps with a lot of their mechanical repair and construction situations.

A local high school teacher was bringing over about 15 history students to help with our spring cleaning to get the museum ready for opening day on Memorial Day weekend. We were so very appreciative of their assistance. 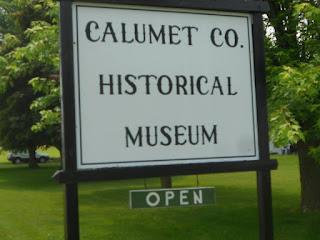 I took charge of a crew of four young gals.... they became my bottle stackers, bug-suckers, and glass display case washers.  We had a lot of giggles and fun while they buzzed along and worked hard. 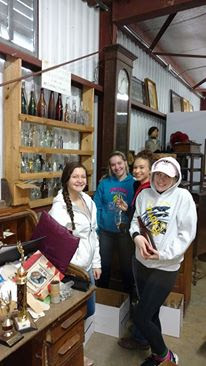 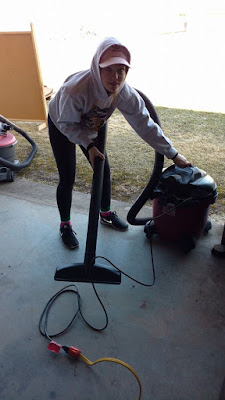 Steve and I brought along a case of water and dozens of cookies to keep them fueled. Since many of them had never been to our museum before, they were discovering fun stuff and finding out about a lot of interesting historical items from our area. 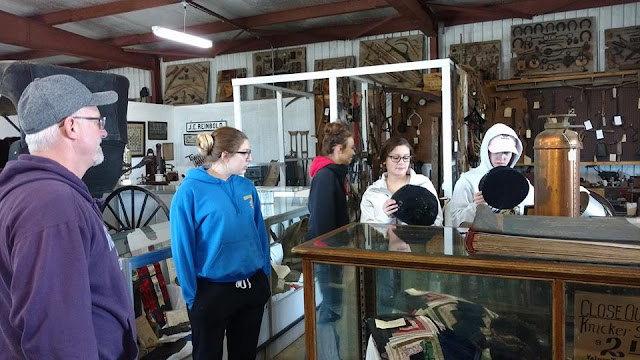 We got a LOT more accomplished than we ever expected to get done
with all of their great help and energy. 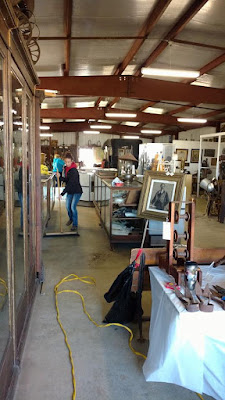 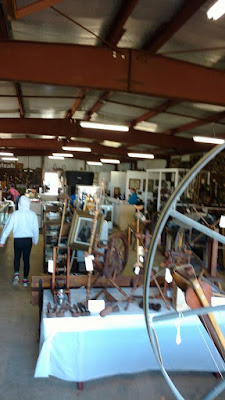 Steve had a crew of boys over in the agricultural area in the north building, and they were so busy moving things, unloading the junk stashed in the rafters and helping to organize a lot of the displays. Steve and Mike just built this huge storage rack in the back room last week.  It can hold 100 categorized boxes of artifacts in order with a main index cataloguing them all for easy access. 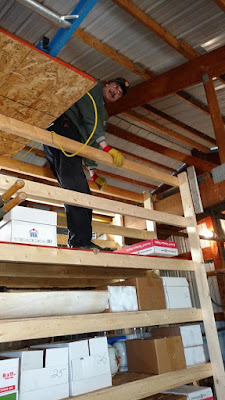 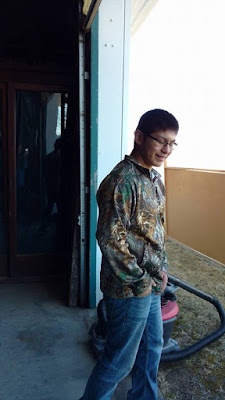 This is a body retrieval basket (nope no bodies in it) made of wicker for air circulation. Years ago, it may have taken a day or two to get a body into town from the outlying farming community until the mortician could attend to it.  Pretty gruesome, but the kids enjoyed the story behind it. 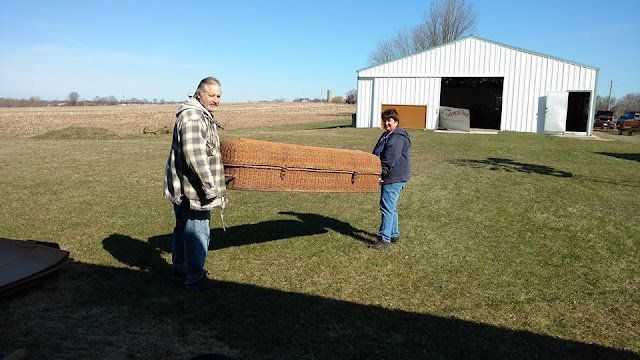 Our girl crews were pretty much finished over in the commercial, educational and domestic areas... so we sent them over to give the boys a hand in the agricultural and mechanical building. Someone had stored years of cardboard boxes up in the rafters....  The girls helped flatten and stack all the cardboard for recycling. 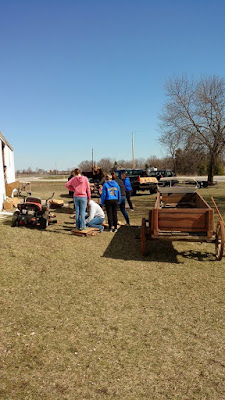 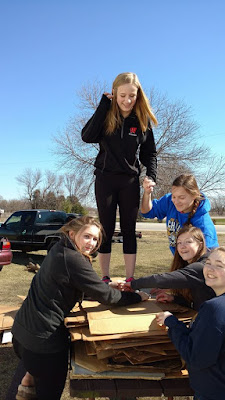 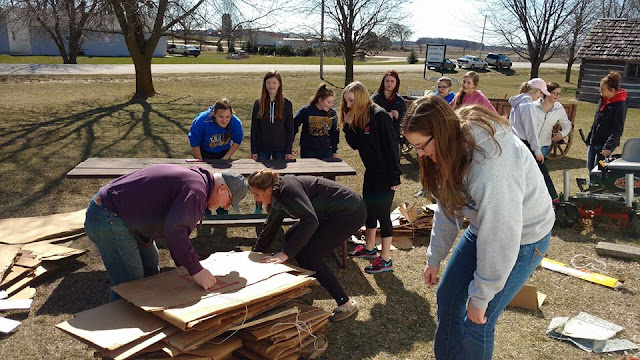 One of the students present was fortunate to have her grandfather come out to the museum. He is a local resident with a lot of interesting stories. He gave a talk about life on the farm, what he did as a teenager, and how he was enticed to complete high school and graduate (an aunt promised him a new shiney Schwinn bike)  when so many of his pals quit to work on the family farms.  He was an engaging speaker who kept their interest. 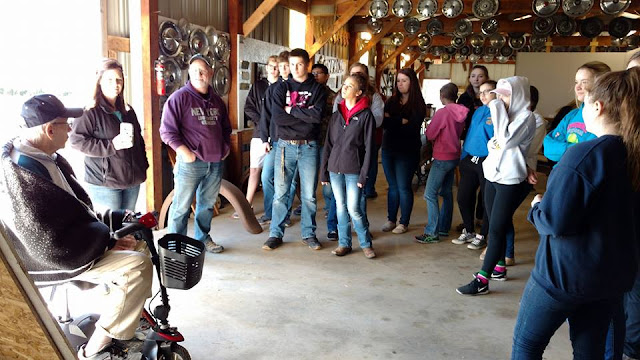 At one point during the talk, I noticed his loving granddaughter come over and adjust the fleece throw over his shoulders.  Awwwww  It was kinda cold in the museum buildings and it was a nice thoughtful thing for her to do. 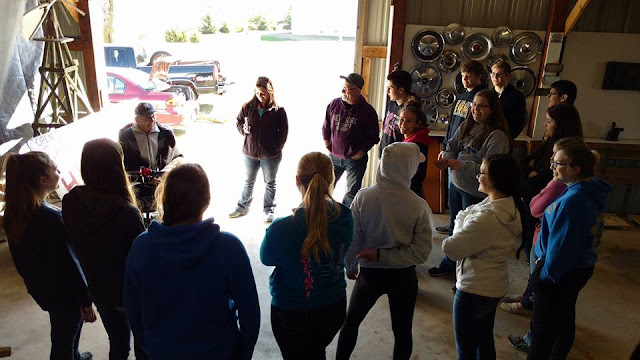 Once all of the kiddos were gone, it was time to gather all of our cleaning supplies and tools and load back up to go home. I tell ya, even through we are smiling in this pic, we are TIRED!  We were in need of a long hot shower and sound nap!!!! 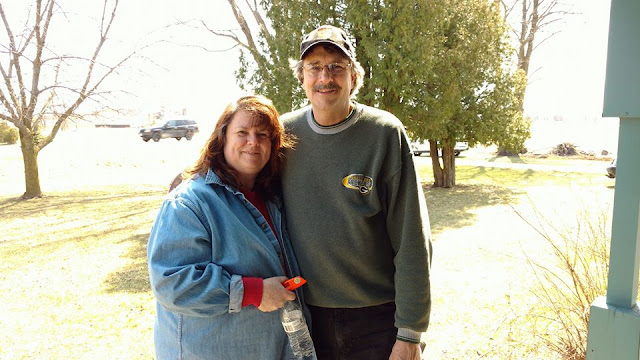 We hauled home all of that flattened cardboard to be recycled --- we will put some of it in our recycling dumpster one week at a time. It's a good thing Steve had just picked up this cute little utility trailer that morning. It sure came in handy. 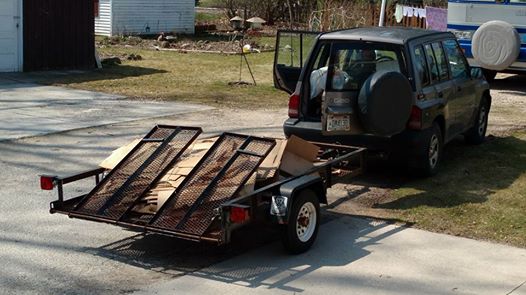 Yes, Steve found this adorable little utility trailer on Craigslist the other night. He was able to take a little break from the Museum to run over to the next town and buy it. The first people that were going to look at it passed, so we were next in line. The seller called and said he had two more people lined up after us, so it was "buy it now or lose the deal". Steve handed over his crew to another board member, grabbed some cash at the bank, and went to pick it up. Not too bad for $300! 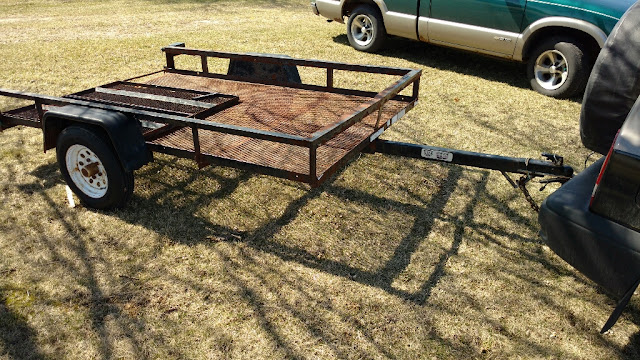 He will take his grinder wheel to it and get off some of the rusty spots and flakes of loose paint. Then we will brush on a little primer and Rust-Oleum paint and it will be good as new. It seems to be pretty well-built, for a lightweight trailer. Our little Tracker can only safely tow about a thousand pounds according to the manual. So this trailer will really come in handy for little loads. Tires are good and he is going to grease the bearings and hubs. Electrical all works fine, as well as the hitch latch and built-in ramps. 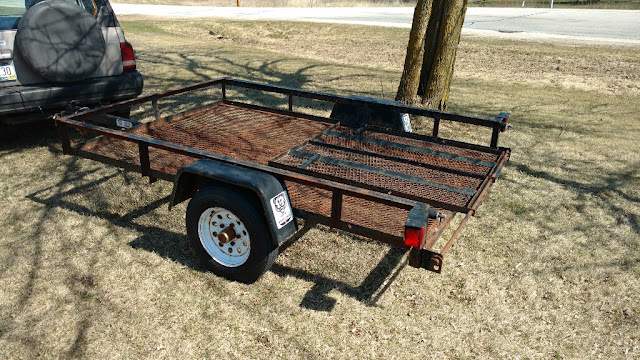 I could have really used a trailer like this on Thursday when we picked up that Union Custom Loom! We wouldn't have had to dismantle it to fit it into the back of the Tracker. It could have come home all in one piece. Oh well, we are going to dismantle it anyhow to work on it, but it would have saved time.

We are looking at a nice warm Sunday today, temperatures might reach the seventies. Might do a few things around the yard, and hang up some laundry on the line. Steve is working on adding a 50 amp power outlet to the side of the garage for the motorhome, and running heavier service wire out to the garage breaker box.

Yesterday we did some work on the flower beds and straightened up all of the white edging around the sidewalk from the front of the house to the back. It was all tilted from the ground heaving during the winter frost. Today I might get the front and north side done as long as it is warm out.

But as turned on the tv... that danged weatherman says it might rain today!!!

Now we are thinking that after our coffee this morning
it might be a good idea to take some dogs
for a nice long walk.

Posted by KarenInTheWoods at 9:33 AM