Question:  What does a roll of tape, a painting extension pole, and a hunk of rope have to do with a cistern? 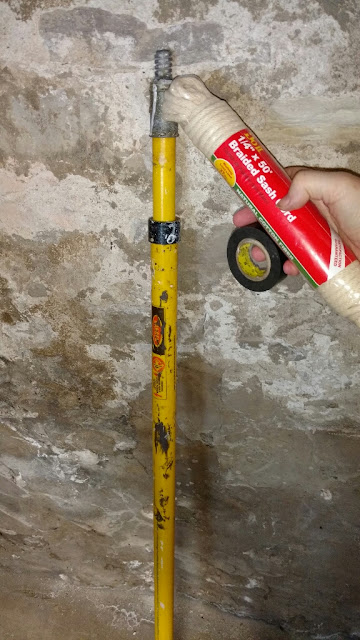 Now, some of you are probably asking "What is a cistern"???   Well ... it's a huge cement reservoir, usually found in old homes in the basement.  The water runoff from the roof is channeled down through the gutters and downspouts into a chamber in the basement.....  Here is ours....  behind this cutout is a HUGE space with 2 ft thick walls of stone. 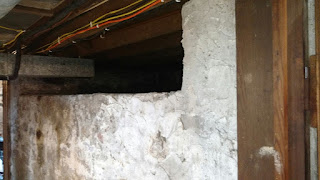 Here is a photo of a gentleman (George Baldock Jr.) who grew up in our home.
See the gutter work behind him? 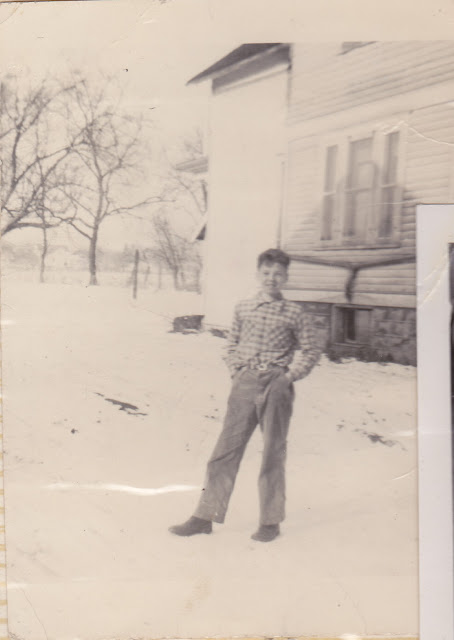 There was a gutter and downspout structure like that on each side of the house to collect all of the rooftop rain and channel it down to the cistern. Once the water collects into the big holding area, it can be either filled into buckets via this HUGE faucet in the basement wall.... 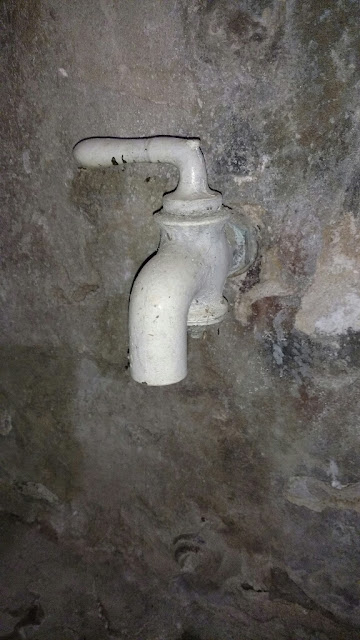 Or it was pumped with a big hand pump (now gone) up through a pipe into the attic of the house!  Up in the attic was this big steel holding tank.  That would get filled by the pumping up water from the cistern.  It was usually done by a servant in the early morning hours before the household was awake.  Then the cistern water could be pressurized by gravity to flush the toilet in the water closet, or into the sink in the butler pantry.  The servant in our home in 1920 was named Josephine Flemming according to the census.  So that was most likely one of her many jobs to do. 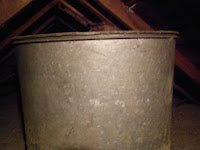 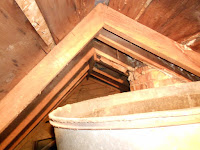 WHY am I yammering on about a cistern?
And what did a roll of tape,
extension painting pole
and a rope
have to do with it?

The cistern is situated in the middle of our home, under the dining room.  The main electrical panel box is on the far left and the garage is out back to the far right in this diagram.  The existing power line leading to the garage was only for 20 amp.  When working on items in the garage or out in the backyard, Steve would sometimes pop the breaker when using strong power tools.  If we plugged in our motorhome to the garage and ran either the heater or the air conditioner or a vac cleaner, it would also pop the breaker. 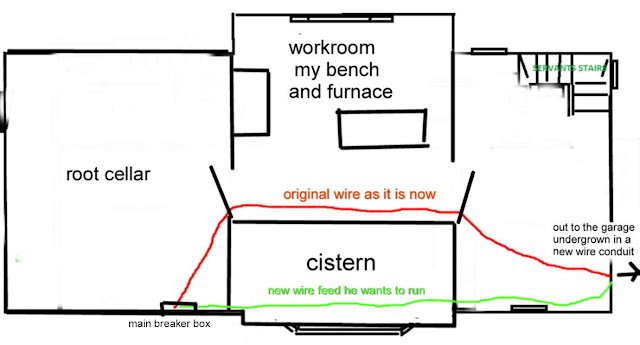 The existing lighter gauge wire is the red line.... Steve wanted to run heavier 6 gauge wire, taking the shortest possible path, due to cost of copper, it would save us quite a bit of money.

But... HOW to get the wire across the top of the cistern?
(which is long ago abandoned and not in use and all dried out)

Steve was opting for shimmying over the top ledge, dropping down inside and taking his ladder with him to get back out.  I said NO WAY!!!!! 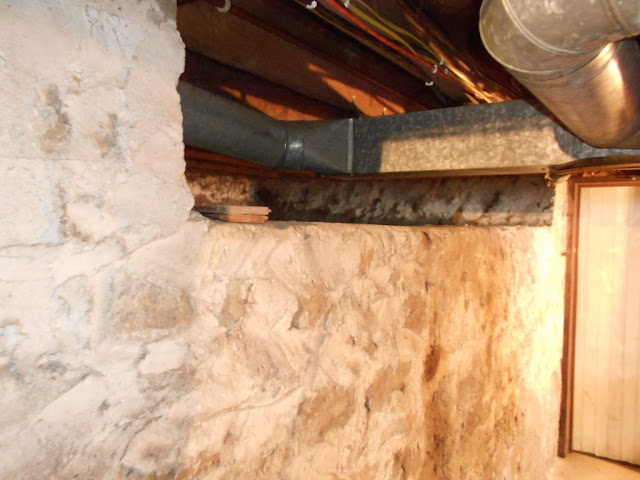 From everything I read, cisterns are usually 4-6 feet deeper than the basement, so that would mean he would be dropping down about 10 feet. Also, I read the bottom surface can contain multiple feet of silt that he could sink down into.  There was NO way I would let him try his idea.  Time to come up with a new one.  I came up with a better idea:

That is what brings in the tape, the extension pole and the rope!

First, we set up a big work light so we could see down into the cistern. Oh my! It looks like a whole other world strange planet with all the dried silt and dirt over the many years (our house is 104 years old) ....  It was so deep in there, you could not even see where that pipe ended that leads to that big faucet on the outside of the wall!   So that silt could be 5-6-7 or more feet deep!   Now THAT is why I wouldn't let that goofball gungho husband of mine hop over the wall and drop down inside! 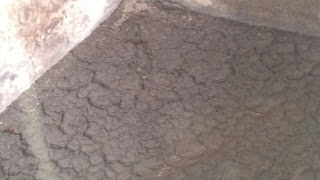 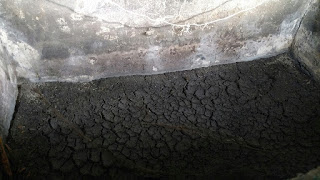 I handled the pole and extended it over to the far corner by the floor joists open to where the electric box is located.  It was still too short, so we had to add an extra pole to the first one! Then we added a 2 ft long bent hanger to the end of the pole to reach sideways through the floor joist opening long enough to get past the 2 foot thick wall. 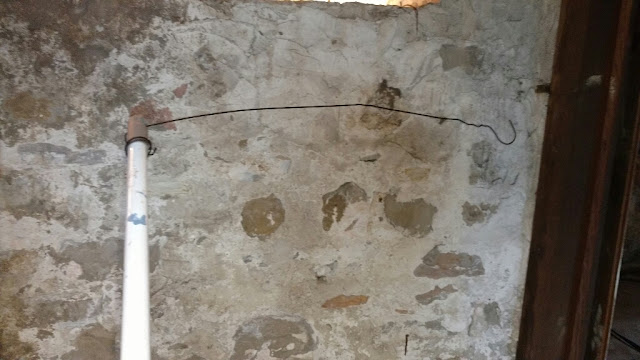 I guided the pole over to the corner, and from that other room in the basement, (the root cellar) Steve reached through the opening between the floor joists, and attached the rope to the end of the pole.....
(ignore the cobwebs, I am not going to clean them) 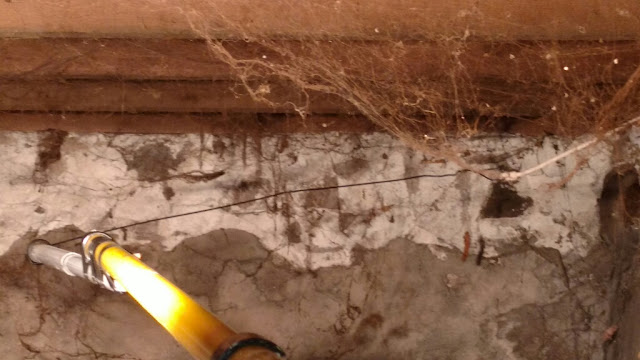 I carefully swung the pole to the middle of the cistern,
trying to not drop it!
I rotated the pole so now the hanger and the rope were facing the opposite way and put it through the floor joist on the other side where he wanted to get the rope to go to.  He grabbed it and pulled it free from my pole.  Whee!  The rope was now in place!

Next, he could attach the rope to the heavy 6 gauge wire and we could pull it through from the one room through over the cistern to the other room!  Voila! 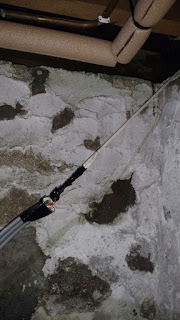 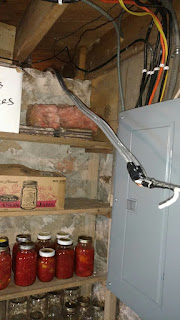 Our electrician friend will hook it up to the box once he gets the wire fed out to the garage.  I can not imagine what an electrician would have charged us to get a wire across that cistern!  Now we also picked up a 50 amp outlet box to have him wire on the far side of the garage.  We can plug in our motorhome and not worry about popping any more breakers!
Lowes for $27.97 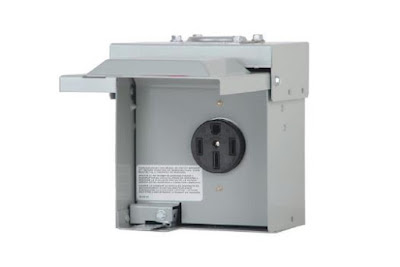 Now the other project we worked on...
kinda sorta by accident!!

Sunday night we were sitting out in our front porch, enjoying the evening and watching the cars go by.  (sometimes guessing their speed if they are exceeding our 25mph limit)  LOL....  Our front porch is pretty comfortable with some handwoven runner rugs over the old wall to wall tan carpeting. 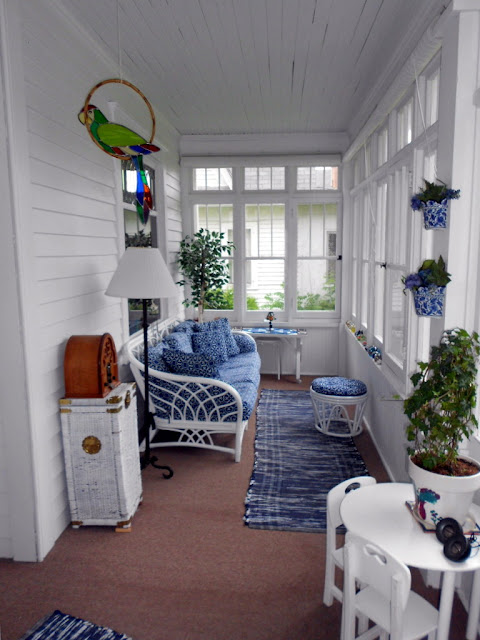 Steve said: "This old tan wall to wall carpeting is in pretty tough shape, what do you think about replacing it with vinyl plank flooring?"

I replied: "I wonder if there are old original porch boards under the carpeting?"

That is ALL it took....
ten minutes later this is what was happening! 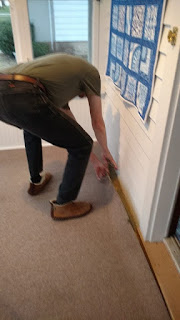 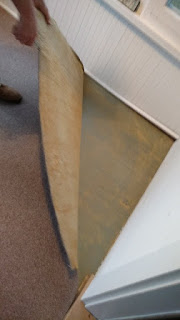 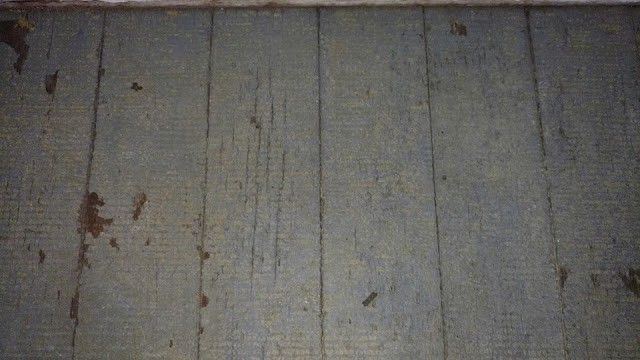 I had to rush to move all the furniture off the front porch, stacking it into our foyer and our living room. He was ripping up the carpeting faster than ever, and he only took one break to help carry out the large rattan couch.  I got everything out of the way and he was able to haul out the carpeting in pieces.  It had only been lightly glued underneath and came up with ease. 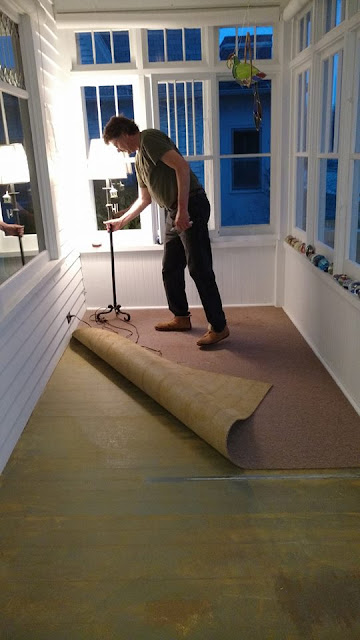 I ran around with the shop vac to take up all the dust and dirt that accumulated over the years.  In talking with the gals who grew up in our house, the older one remembered the porch boards, but the younger one (my age) said she only remembered it carpeted. That made that carpeting over 55 years old!  On the back side of the old carpet, we saw written in black marker the words CITY HALL so we might assume it had been second hand carpeting to begin with, installed about 1960 or so?

Early on Monday morning, we hit the local hardware store and picked out a color....  Valspar Porch and Floor Enamel in a color called Aristocratic Blue.  I started rolling the first coat after Steve removed all of the quarter round trim strips along the floor.  He did my cutting in with a brush, even though he HATES painting.  I recently injured my elbow and it's slowly getting better. So he took pity on me and pitched in with painting duties.


The slightly roughened surface of the glue we left in place, as it would help with slippage and keep our runner rugs from sliding around. The slight texture would look okay with a painted surface, so we just prepped by a good vacuuming and sanding off any really rough spots. Steve also filled in two larger spaces between boards with a paintable acrylic silicone that would stay flexible if the porch shifts during temp changes. 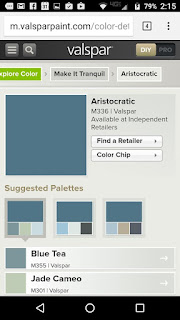 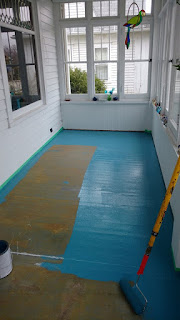 It went on pretty bright, but I knew it would darken as it dried.  Long ago, I went through Paint School with Valspar paint when I worked in Oconto.  I knew two coats would provide a good long lasting surface. 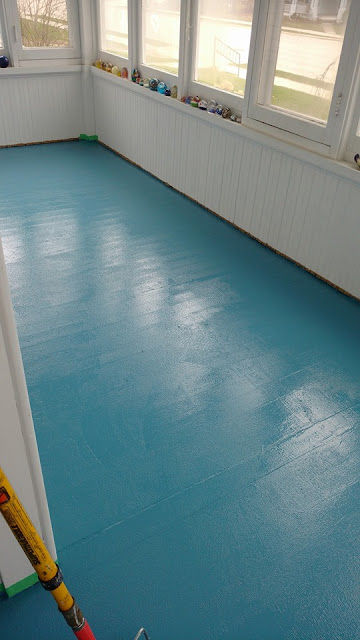 Temps dropped fast on Monday afternoon as storms rolled in.  We had to set an electric heater on the floor to blow the warm air over it to cure the paint.  We added a fan to help circulate the air too.  As much as I wanted to, I held off doing a second coat on Monday, giving it time to dry to a good hard surface before adding the second layer.


I rolled on the second layer on Tuesday and set the fan and heater again to help cure the second coat and get a good firm finish.

While waiting, I went out in the garage and also painted all the quarter round trim on sawhorses. It would now match the floor.... instead of white, it was now blue too.

By Tuesday evening, it was kinda dry.  I ripped off the green tape I had marking off the edges, and Steve air nailed the quarter round trim into place. By Wednesday morning we would be "good to go" and move our stuff back in place! 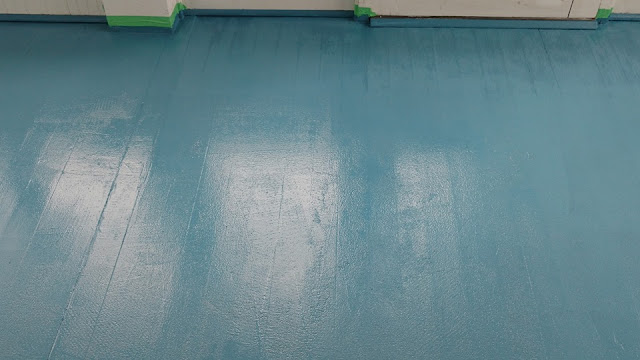 This was looking good if I say so myself!

This morning, Wednesday, was MOVE IN DAY!  We hopped out of bed, and after a few gulps of coffee, we got to it.  Steve and I had our porch back into shape... and sat down for a second cup of coffee before our friends Herb and LuAnn came over to walk about town for a couple miles.

It was cold out, only 33 degrees,
so the windows fogged up with our hard work.
Whew! 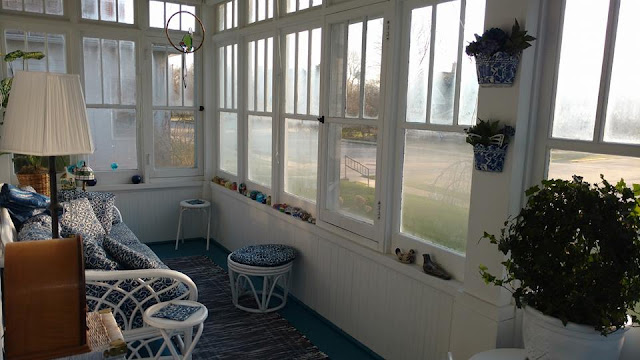 It felt so good to put each thing back where it belongs...
including this old rocking chair we got from the previous owners.
Perfectly occupying it's rightful place. 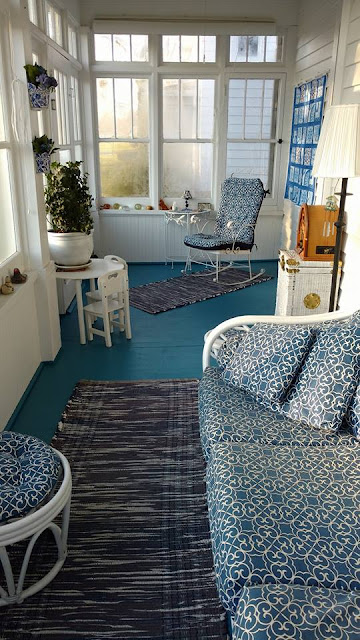 We spend a lot of time out on the porch, reading, sometimes eating, mostly sitting and sipping our coffee or a glass of wine.  Sometimes I roll out a table loom or bring along knitting or spinning. We try to spend time out here in the Spring Summer and Fall... and even sneak in a few Winter days if the sun is shining. It is our second "livingroom" .... 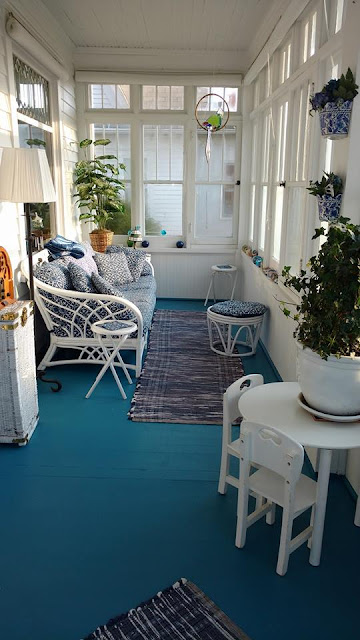 Of course, it is also Dogger Approved! 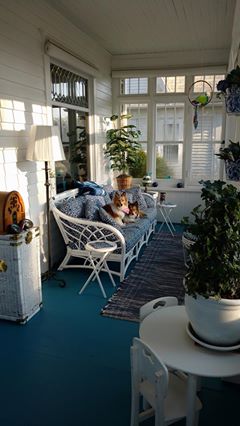 Just wait till you see the next project in the works for Our Old House.. it's a biggie! We have to go through various stages of steps to get it lined up.  All of our projects we try to not "modernize" our house's original style. We try to just enjoy living here and make it more "restored" than "improved"!

Posted by KarenInTheWoods at 10:07 PM