So here it goes, we are up to the letter K now!

Koni Shocks:
Suspension on a big rig is pretty important.  Not long after buying our motorhome (used) we noticed a CLUNK sound on our rig when going over a bump.  Rut Roh.. time to check it out.  We knew the shocks were probably in need of replacement.  Steve examined the shocks and they were okay, but the mount on the driver's side was cracked totally loose.  Oh boy!  No wonder we were hearing a bad sound.  After removing it he found it must have been broken for a while , as it was rusty and not a fresh break.  Luckily he can weld and he repaired it himself. 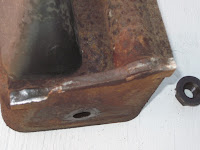 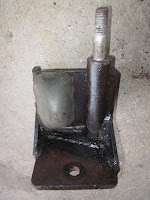 A few years later, he decided to replace the shocks.  We had a very tough time trying to find replacement Koni. Seems they stopped making the shock size that we needed.

A few folks emailed and asked me WHY is it such a big deal about the shocks?  Well, it is because the mid 90's Safari motorhomes were constructed on their own exclusive chassis that Safari made themselves, with a sub company called Magnum.  Both of which are no longer in business.  It's not like a common Roadmaster or Freightliner, where parts are readily available.

The suspension is a specially developed style called Torsilastic developed by the BF Goodrich company and is called Velvetride.  It is comprised of a series of rubber wedges and big rubber bushings.  No springs, no air bags.  Just shocks.  (and it does ride like velvet!)  Not many repair places even heard of it, much less able to do any alignment or repairs on it.  Some of the larger coaches/buses like Foretravel used this suspension too.

The trouble with the shock replacement on this chassis is that the original shocks were made exclusively by Koni as a special configuration for the Magnum chassis and not available on the open market as replacements.  They are adjustable, but one shock on one side of ours will still adjust, the other side won't hold anymore, so the seal must be blown inside.  No leaking hydraulic fluid, but if Steve grabs one end and I grab the other, we can pull it apart too easily.

The only other alternative for us vintage Safari owners is to buy a special bracket made by a guy out in Washington for the Safari rigs that will let a person install pairs of smaller more common Koni FSD shocks-- 2 together on each side.  Just the brackets are $295.00 for a pair,  and the 4 shocks just for the front would be another $145.00 each, which is a total of almost $900.00  !!!!

So THAT is why we were excited to locate a company that has a single larger shock that will fit our rig.  It was Bilstein. We ordered some Bilsteins to replace the original Koni shocks.  He did the replacement SO fast I never had time to take the pics. ARGGHH....

We ran on the Bilsteins for a while, but Steve realized they were for a spring type suspension and not the torsilastic.   We really needed the type of dampening on the upswing not the downswing like the Bilsteins provided.

Through the wonders of the internet, and belonging to a Yahoo group dedicated to Safari motorhomes ....  https://groups.yahoo.com/neo/groups/safarimotorhomes  We found out now the original Koni shock numbers we needed were being produced again, so we bit the bullet and ordered some.

We ordered the the rears from RVchassiparts.com Part #: 881458SP2


These new shocks are "adjustable" and you can set them for three different types of rides. The back ones we put on the firmest setting. That helped with bouncing and "porpoising" of the front nose.

For the front ones, we chose a middle setting, then if they get softer over time, we can turn them up to a firmer setting.

He set the rig up on it's front jack to get a bit of clearance ... and it was MY job to turn the steering wheel from side to side.  He pulled out the air compressor and had out his air tools to do the job. 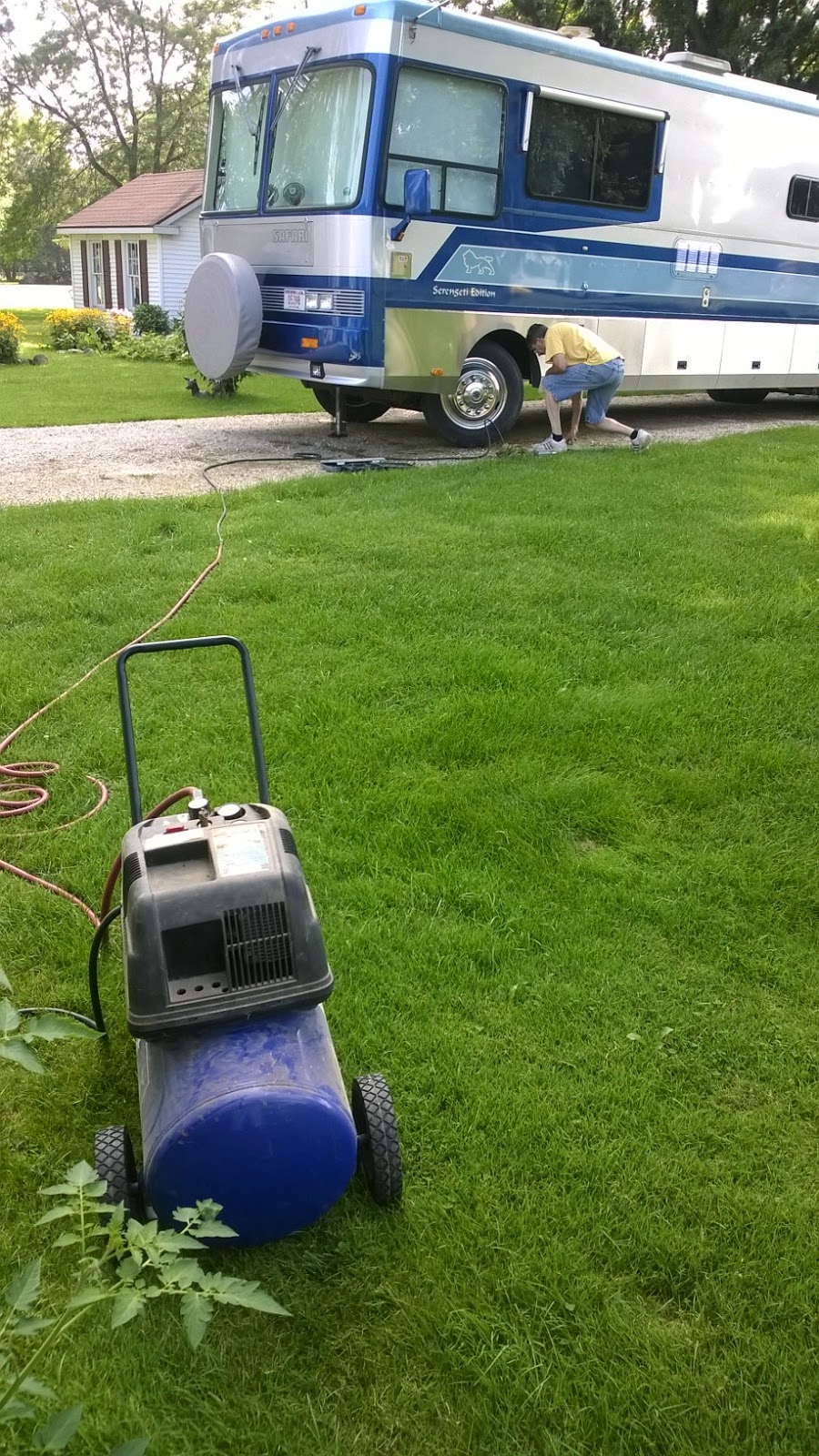 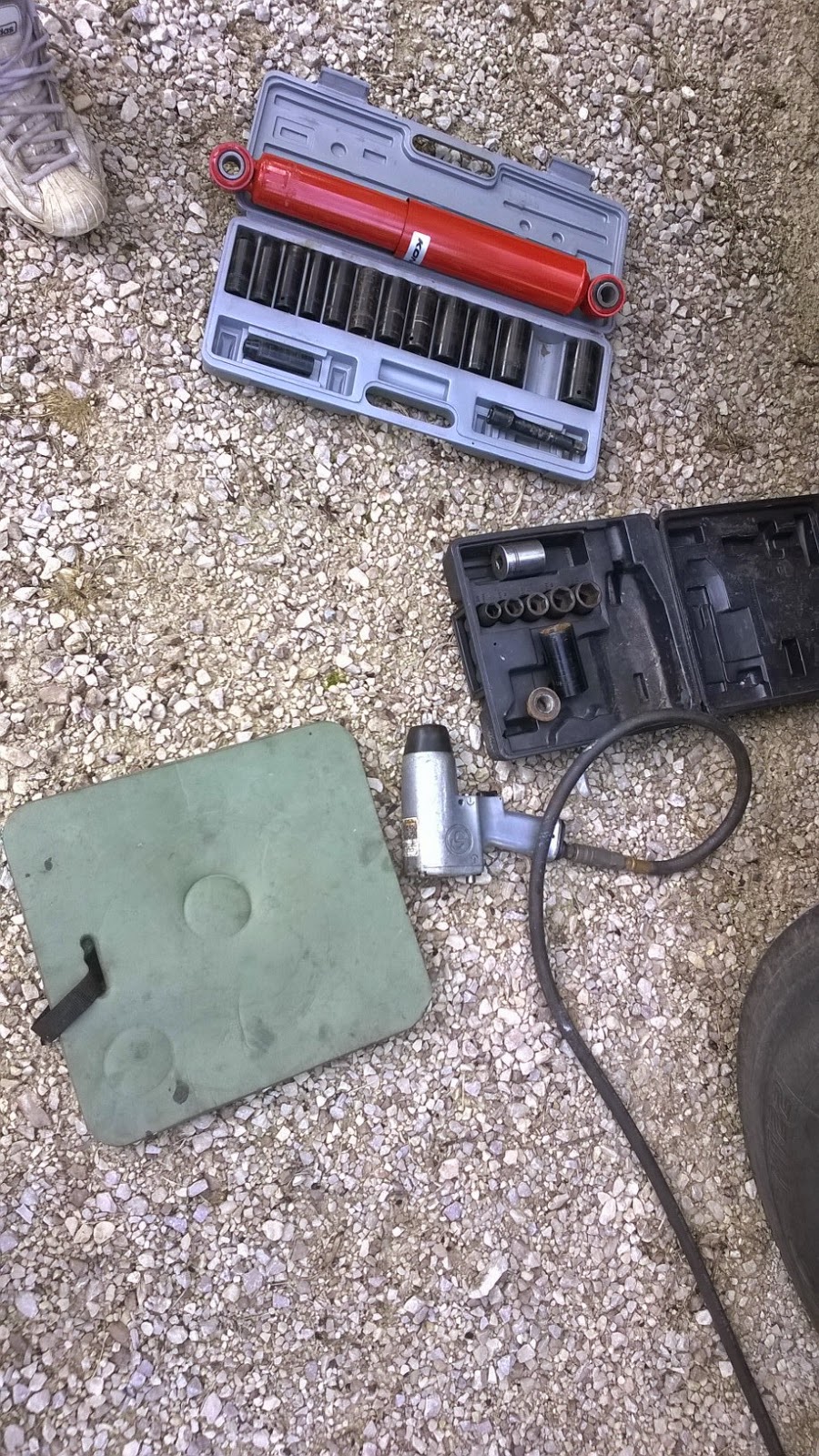 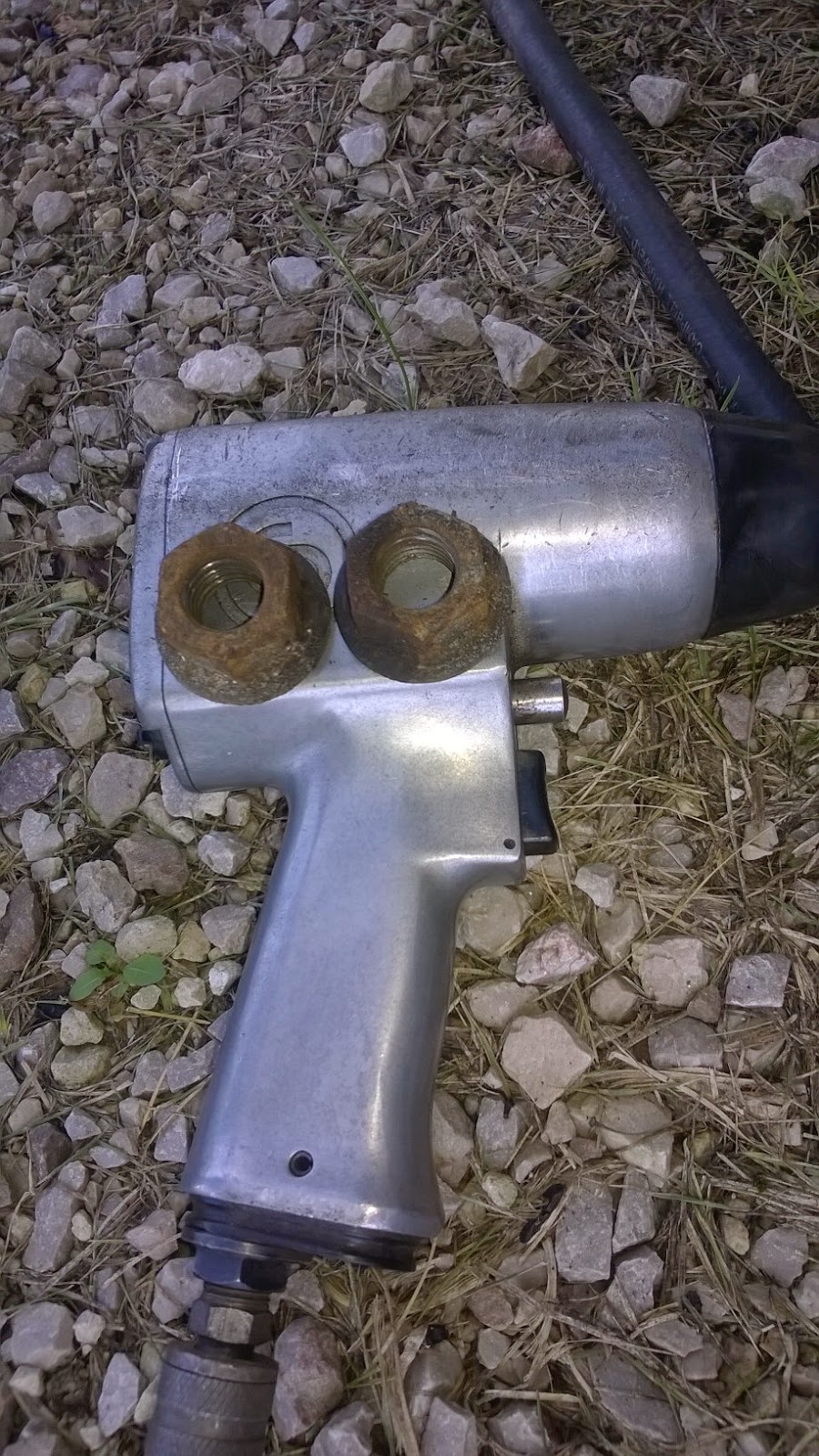 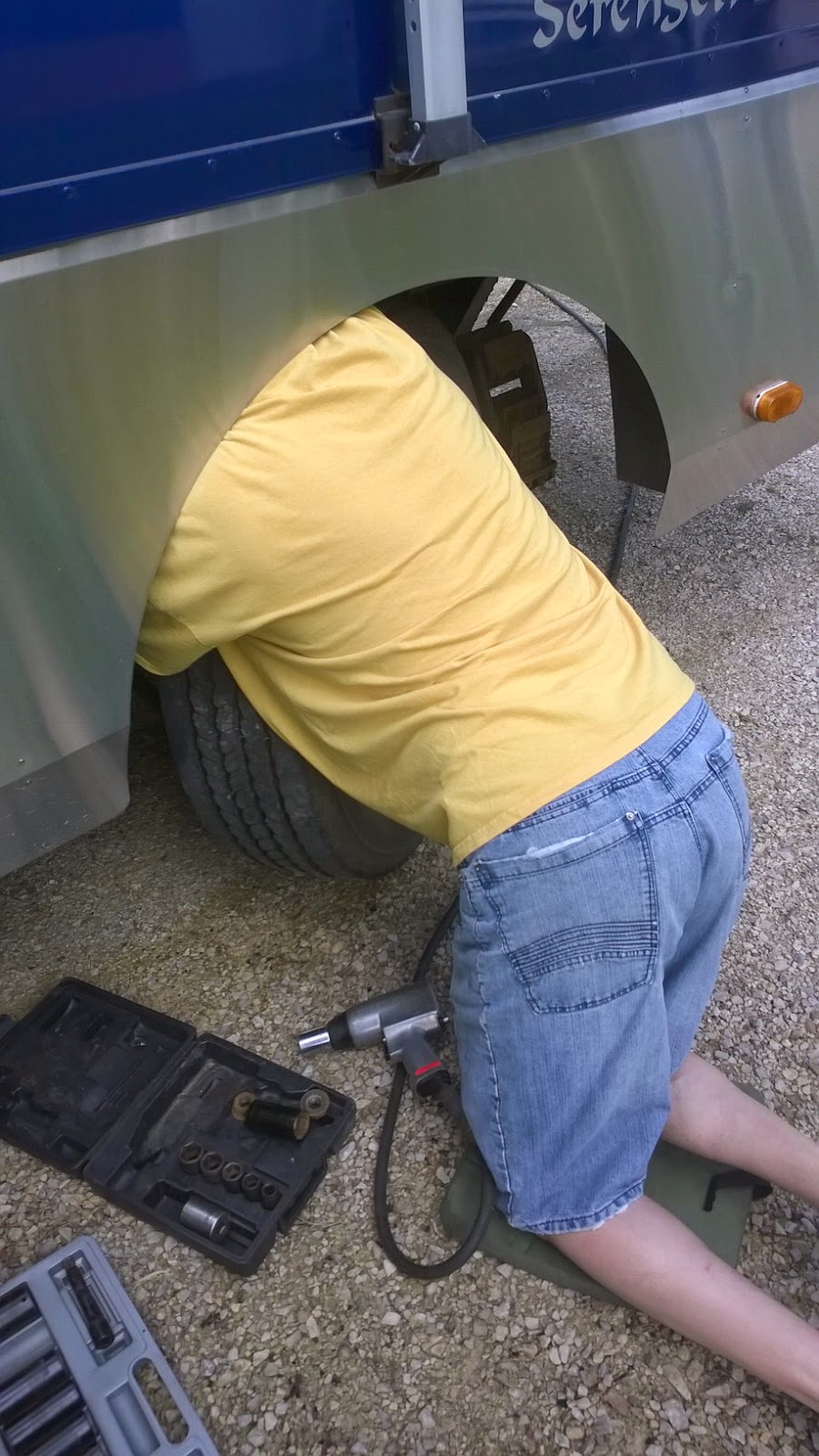 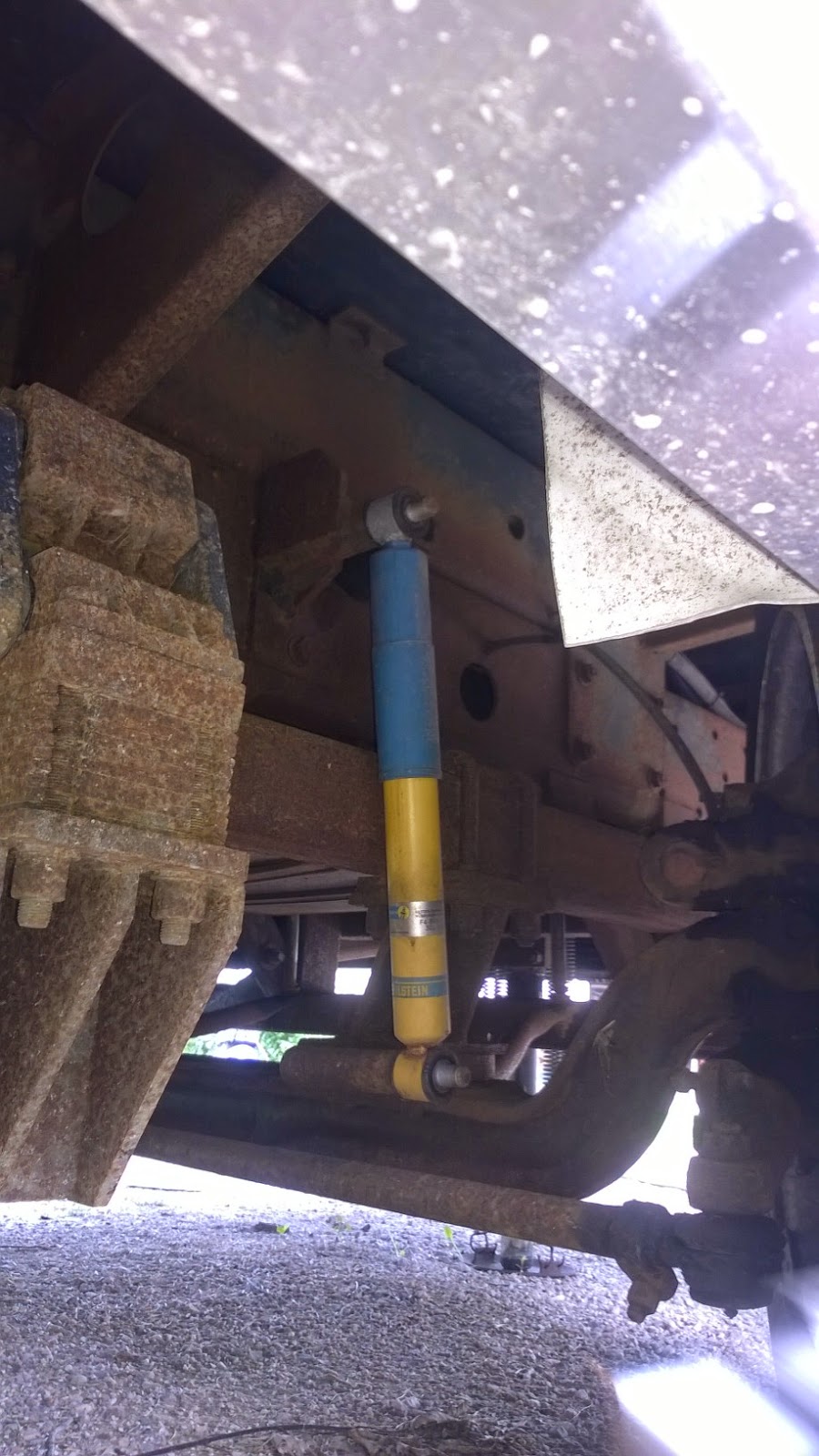 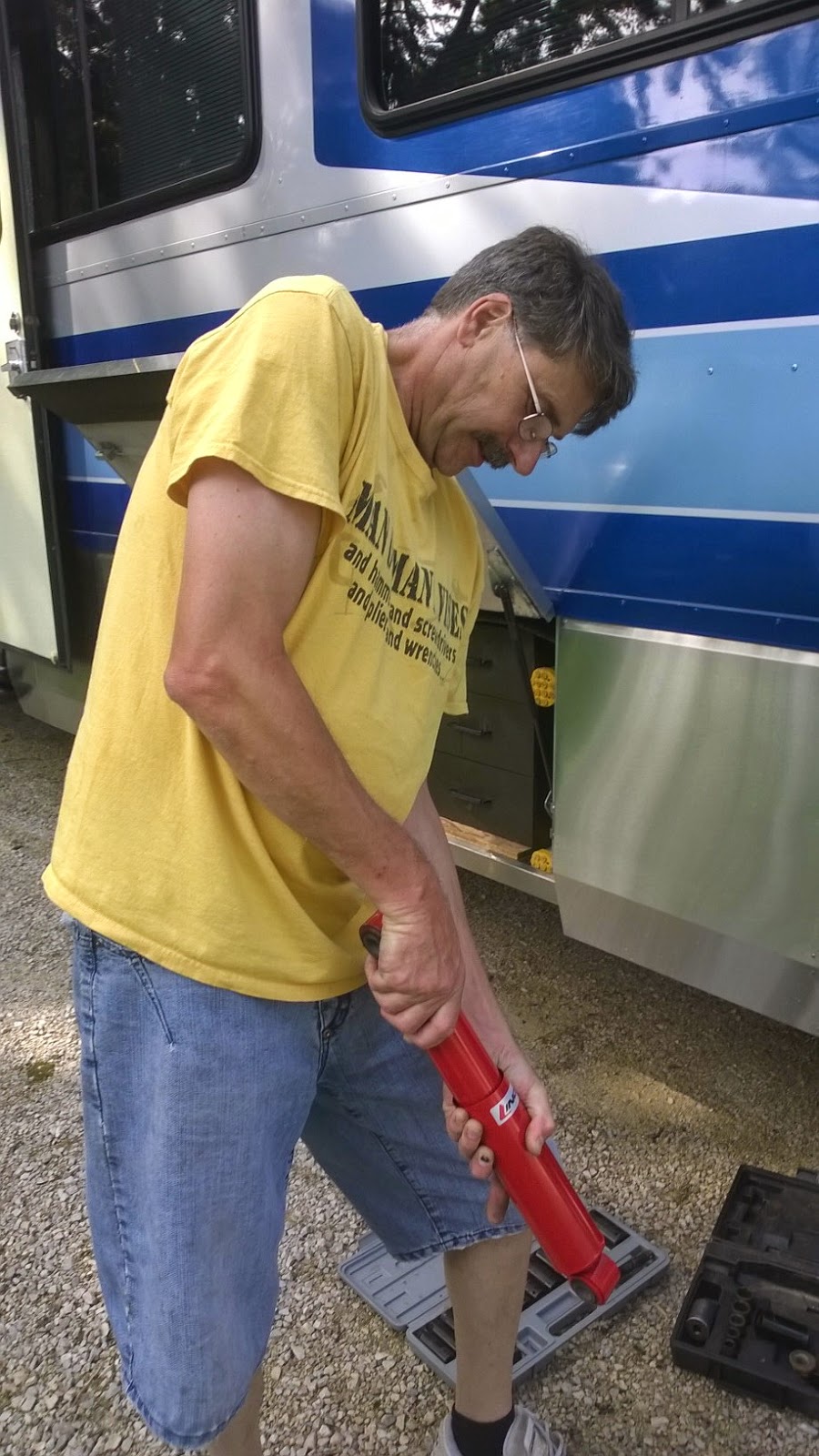 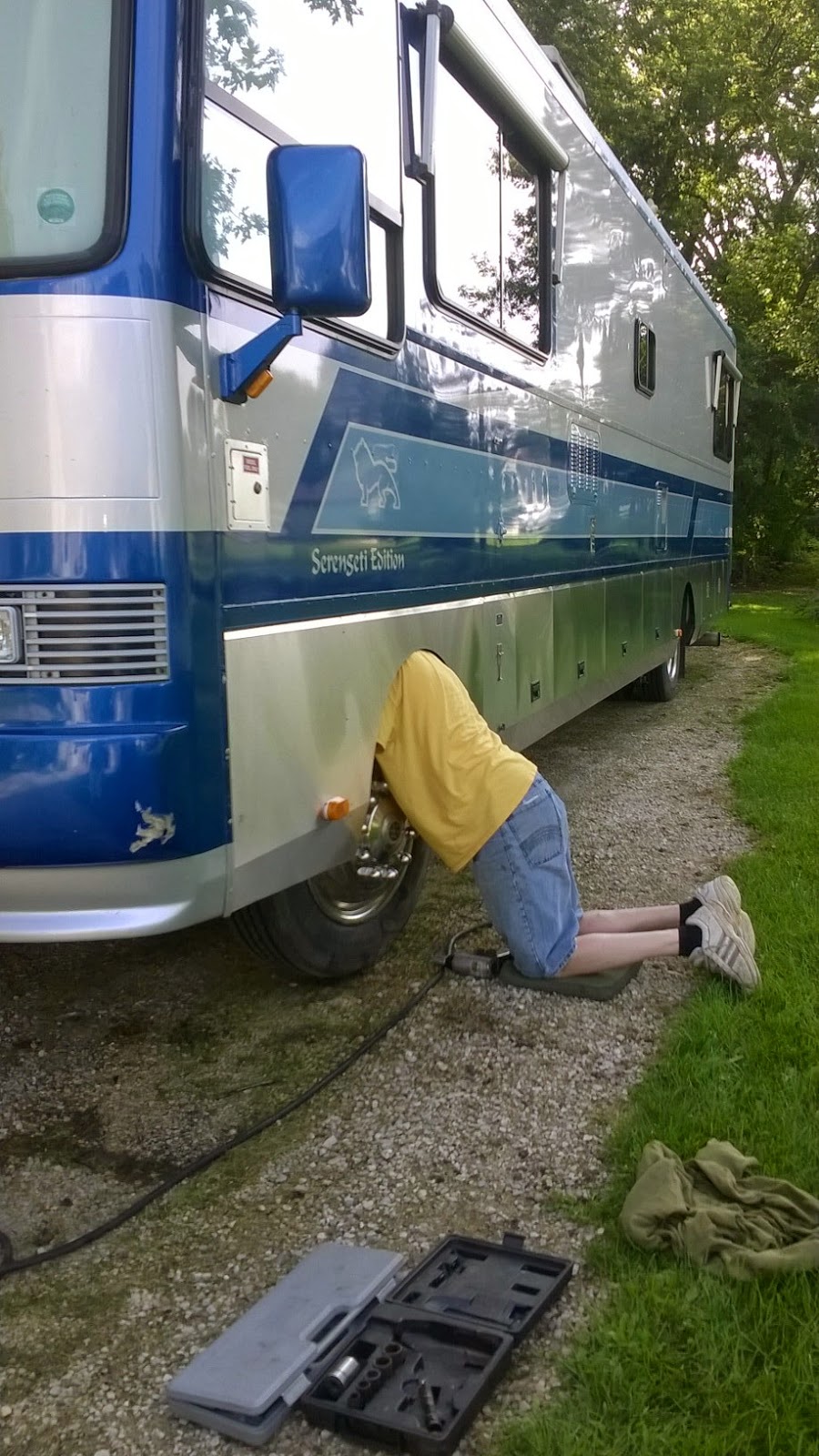 There... new Konis installed on the front.
He did the back ones so fast I never got pics.
What a guy! 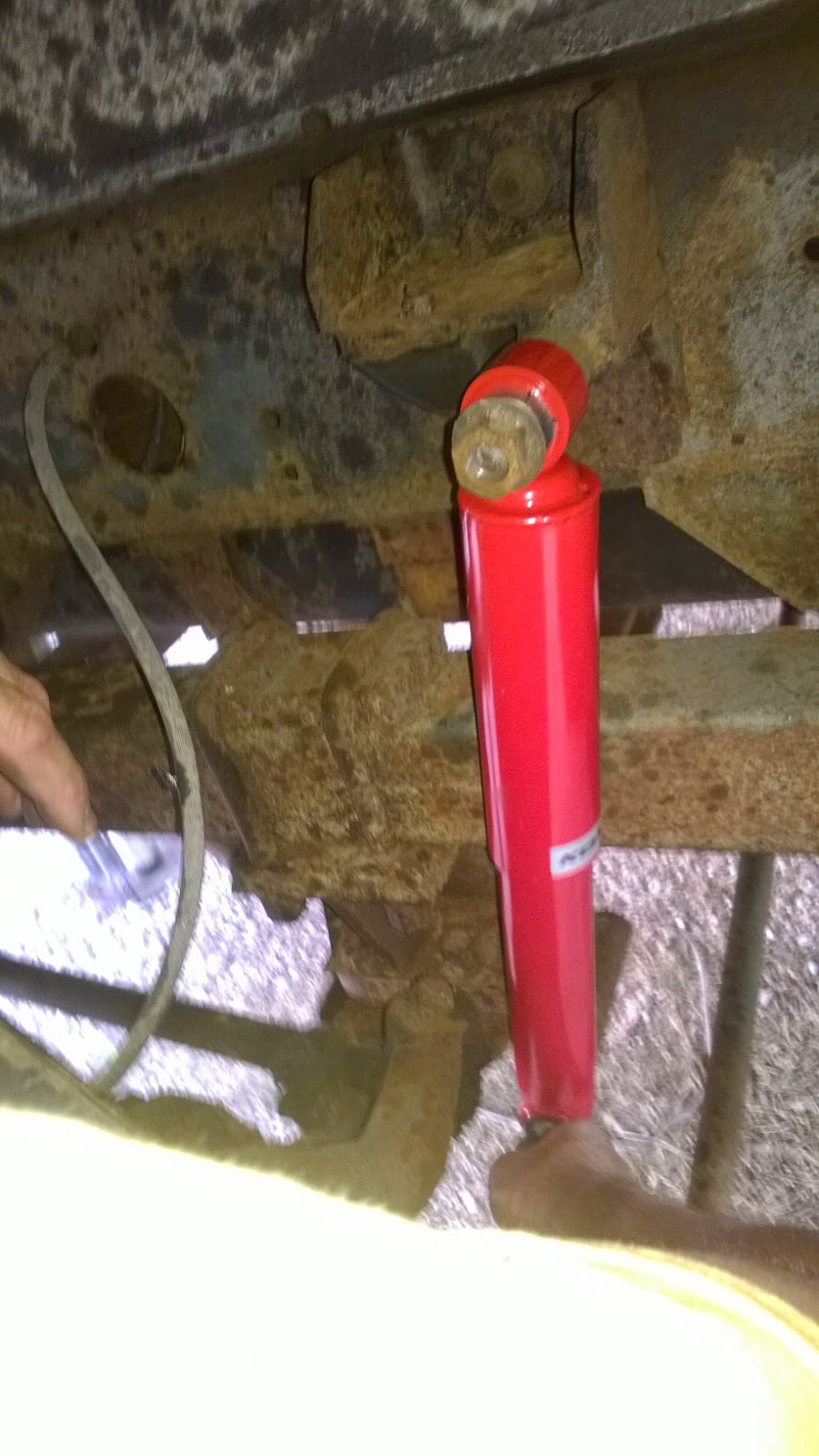 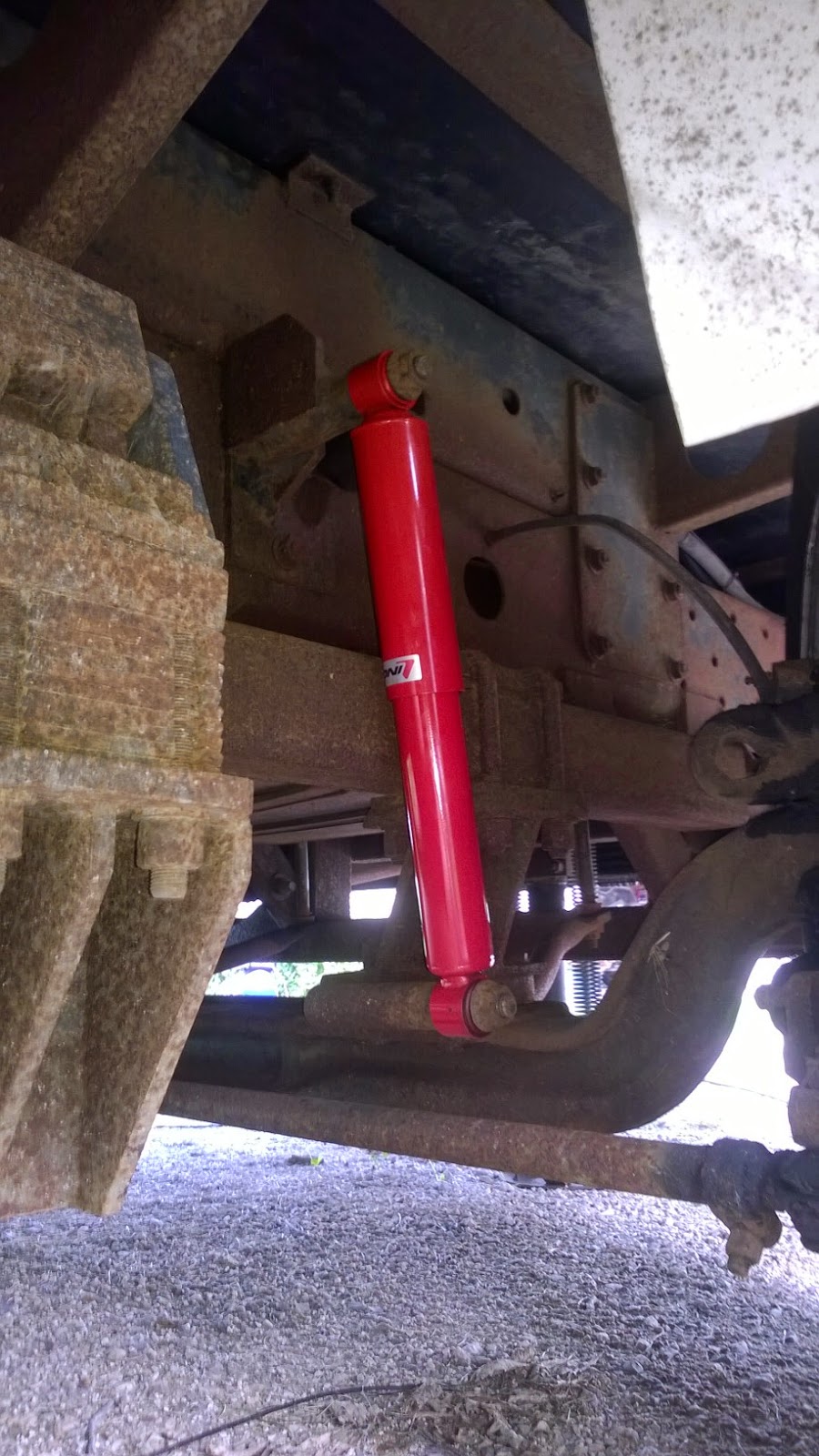 We took it for a test ride and there is a big noticeable difference.  We no longer have that "lean" when going around corners and it is a much softer ride with no noticeable "bounce back".  It was a worthwhile upgrade to change them out.

Our friends with a spring type suspension on their Safari Sahara bought the Bilsteins from us as they were perfectly good for their type of suspension. So in the end we were all win/win!


Knob on screen door slider:
This may seem like a silly thing... but how many of you RVers have a slide on the screen door?
Yes... most of you.
How many have a white one?
Many of you.
How grubby and dirty does it get from handprints?
Always!!!!

It is already somewhat dusty from travel, and wet hands from doing dishes, going in and out, food on grandkid's fingers etc.  We know... we know. it gets pretty grubby on the slider by either flat palming it or by reaching for the ridged edge of the slider.

I saw this on a helpful hint in an RV blog one day. HEY!  What a great idea! 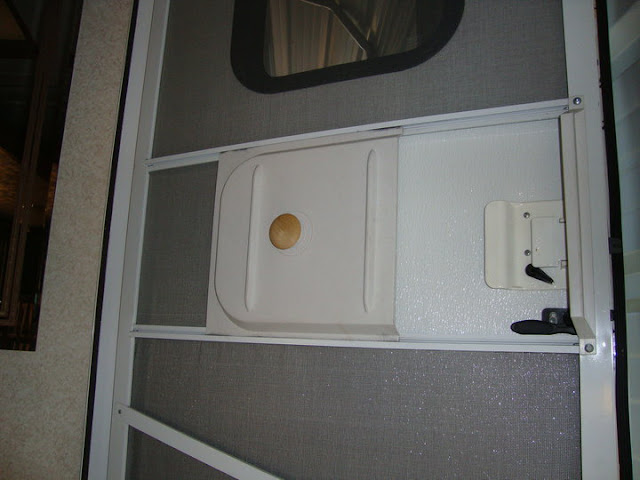 I got a little wooden knob from the same RV friend the bought our shocks (it was off a desk that has survived their house fire, so it has emotional value to her and she shared it with me)   So we drilled a little hole in the slider and mounted this knob.  By only putting one or two fingers on the knob, it slides easily and eliminates the messy handprints on the white plastic!

~~~~~~~~~~
Steve started out the day with running over to the Calumet County Historical Museum. They are revamping the shelving in the storage area and he is going to build some shelving units for them.  While he was gone, I worked on my rugs for a while.

This afternoon he wants to watch the Wisconsin Badgers play in the March Madness so I am going to get some sewing done.  This evening we are heading to his brother Pete and wife Cindy's new home for a corned beef and cabbage dinner!

(I just LOVE Shaun the Sheep)

Posted by KarenInTheWoods at 12:25 PM