Oh my, what a fun day I had yesterday!

The Wisconsin Sheltie Rescue program often takes in dogs from other states. Our Wisconsin group has a big waiting list of already approved adoptive families just waiting for a Shetland Sheepdog. When no dogs are available locally, Lisa Martin, the founder of Wisconsin Sheltie rescue, will reach out to other states. Other areas in the country often have too many dogs and not enough homes. 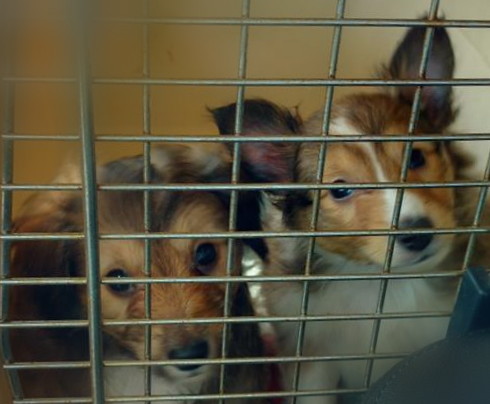 Shelties do not do well in the Humane Society programs or a dog kennel adoption facility. They generally are timid and many will cower in the corner and are not seen in their best light.  A Sheltie's instinct is to be solitary guard dog on a herd of sheep and just interact one on one with a shepherd, or sometimes in a team with another sheltie. They are generally not a social dog until they get to know you.  In a strange noisy dog pound or animal shelter, they are usually pretty much out of sorts and not in their best element.

When the Wisconsin Sheltie Rescue gets in dogs,  Lisa carefully assesses the dog, arranges vet care, and gives them a good bath and grooming  She selects her applicants to match up the right type of dog to the type of person applying for the adoption. These people are screened, and checked out thoroughly before placing the dogs in their care. The adoption fees help pay for the vet care that each dog receives before being placed.

With Lisa manning the operation, and the rest of us volunteers helping out, we are able to bring Shelties to new homes with people who understand the Shetland Sheepdog temperament.

Wisconsin Sheltie rescue has placed many dogs into fine forever homes.  But lately we have not seen a lot of shelties landing in shelters or removed from puppy mill raids.... which is a good thing.   But in other parts of the country, there are still Shelties that need homes.

That is when volunteers come into play. A relay team is set up of folks to transport the dogs from one area to another.

A local gal named Ginny drove down to St. Louis, MO to pick up two puppies and two adult dogs. On her way back she requested that somebody meet her down at the bottom edge of Lake Winnebago and take the 4 dogs the last 38 miles to the Wisconsin Sheltie rescue headquarters.

Lisa contacted me and asked if I could be available to do the last leg. What fun! It was like the frosting on the cake created by all the other volunteers that it took to get the dogs this far.

I went over to the Wisconsin Sheltie rescue headquarters which is also Lisa' s boarding and grooming business called  Stockbridge Critter Sitters. She let me hop in her big Chevy Tahoe which had plenty of room for the dog crates and additional air conditioning vents in the back area for the dogs.

At the same time, I also took along Ginney's two dogs, Mister Sparky and Clarabelle because they had been boarded at Lisa's business Stockbridge Critter Sitters while Ginny did this transport run.

Cell phones are great to coordinate meeting places and timing. I reached our designated meeting place, I found a shady spot to park with the air conditioning running while Ginny pulled up with her vehicle in just a few minutes.


With big hugs all around and happy dogs to see their mommy again we transferred Mr. Sparky and Clarabelle into her vehicle.  Then we moved the two adult dogs and crates into the SUV. 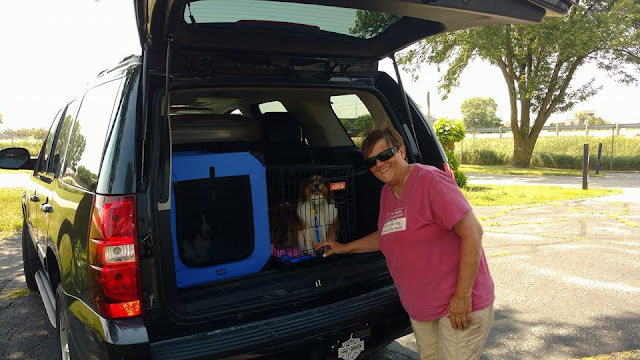 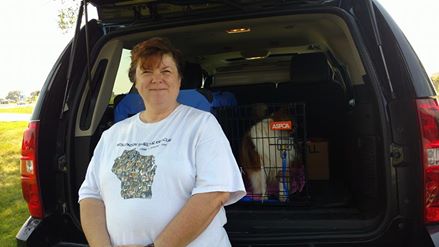 The bi-black Sheltie is a male named Louie.
The sable is a female named Kaella. 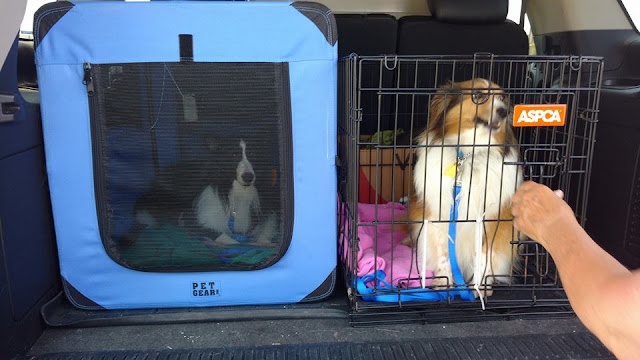 We let out the little puppies for one more potty break and cuddle...
they are both males, 8 weeks old, and totally
ADORABLE!!!!! 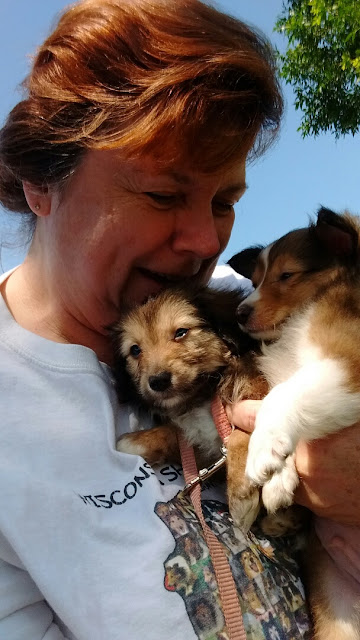 Ginny gave them all a good snuggle and said she knew they were on to bigger and better things. We hugged goodbye, and she left with a very tired smile on her face after all her miles traveled to help these dogs 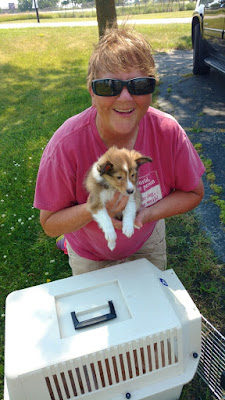 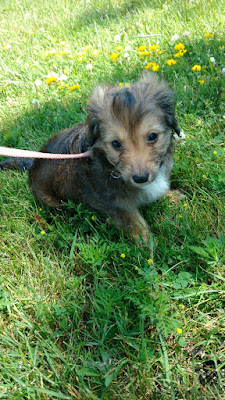 Now it was time for the last 38 miles home. The little pups did some All Star Wrestling and yelping and yowling for about the first five miles. Their crate was on the seat next to me and I snapped these photos while I was at the stop lights. 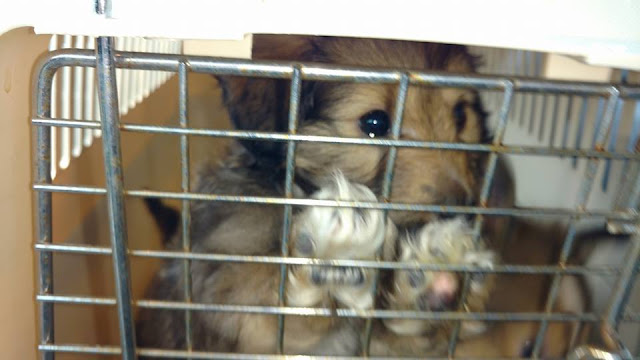 I don't text and drive, nor do I fiddle with my phone when behind the wheel. Especially with such Precious Cargo on board! 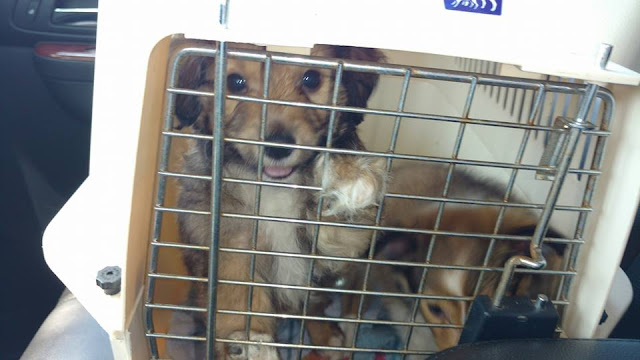 After 5 minutes of traveling, both puppies fell fast asleep. I chattered to Louie and Kaella to comfort them and know that there was a person who was loving them. Even if I was only in their life for one hour I wanted them to feel comfortable. I even sang them some songs. Dogs don't care if you sing off key!

I pulled into Critter Sitters without an issue or problem with any of the four dogs. What a relief! Lisa quickly got the two adult dogs situated in a separate area until all of their vet work is complete. What pretty doggers!  They are both very sweet and seem to be in good health and happy socialized dogs.  Some dogs the rescue gets are basket cases, health challenged or plain old filthy dirty.  These two are just great!!!! We put the wee little pups into an X pen out side and both pottied right away and drank water from the dish.  It was very hot out, but we kept them out long enough to let Lisa arrange their inside pen. 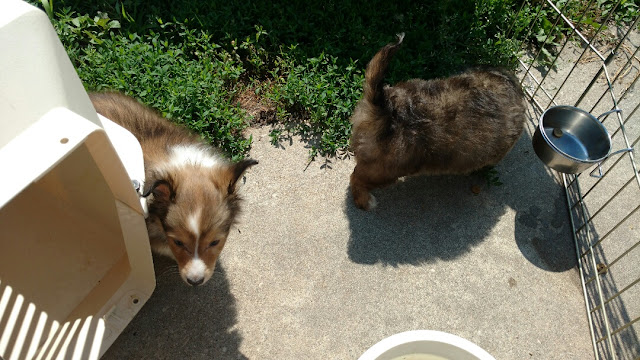 Then the two silly puppies decided they were going to play in the water and take a bath! I think we brought back a couple water dogs like retrievers rather than herding dogs like Shetland Sheepdogs. 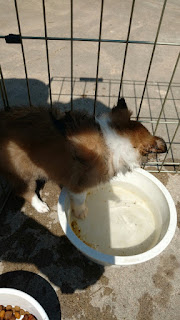 I held the pups while Lisa made a comfortable inside pen in the air-conditioned room of her business. I didn't care if they were all wet, little puppies smell wonderful no matter what. 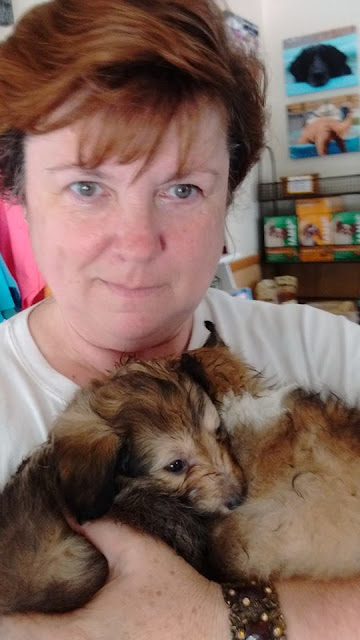 I put them down and said good bye and
headed on back home.
I know I only played a small part in the journey of these four dogs.

Thank you to all the wonderful people behind the scenes who helped locate these dogs, make the rescue connections, arrange the transport in various legs and do it all for the sake of the dogs!

I got home and oh my Lord, were Finnegan and Binney ever jealous! You can just see it on their faces what they thought of me snuggling and holding and caring for for other doggies.


The pictures say it all! 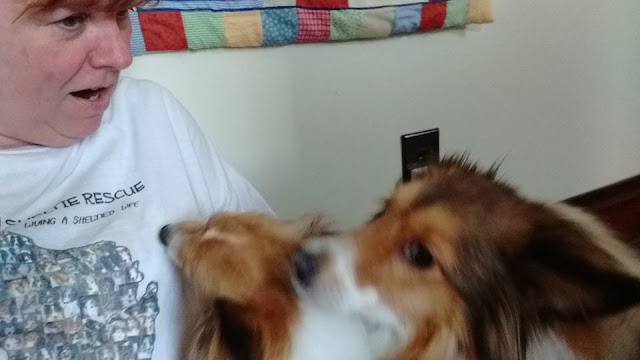 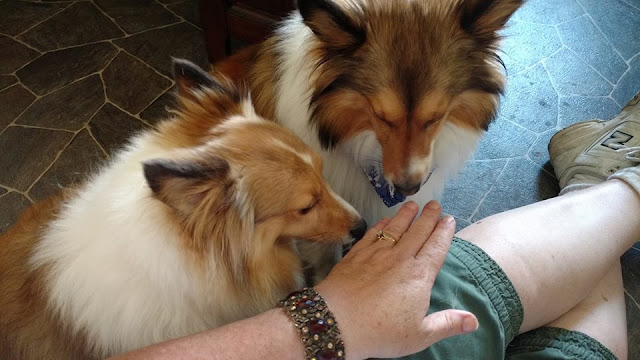 They felt I was a traitor and were worried
that I was bringing the puppies into their household! 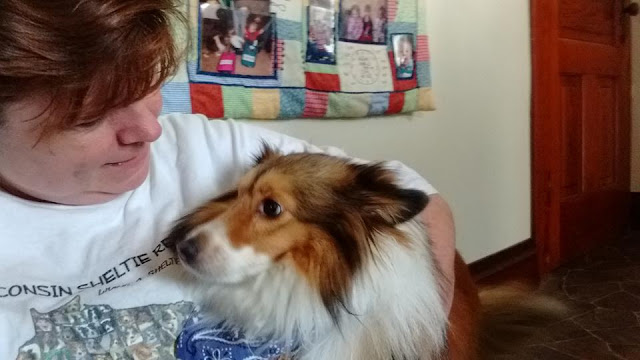 Rest assured my little spoiled Shelties,
your home is secure and I only did this to help out these other dogs. 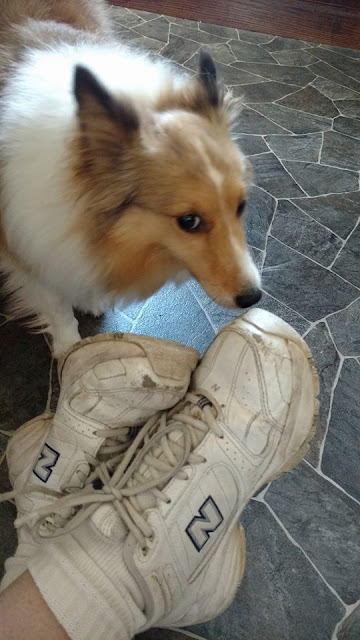 And we can be confident in
knowing that these four rescue dogs
will have wonderful homes waiting for them. 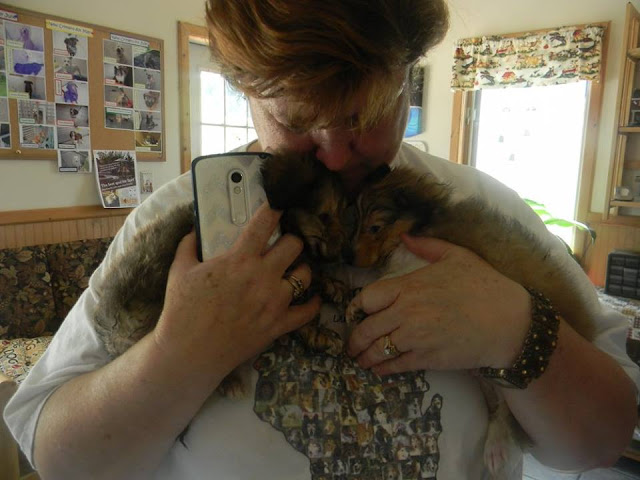 It sure was fun being a little part of it.

Posted by KarenInTheWoods at 10:41 AM