Ringing In The New Year

First of all an UPDATE on my stepdad... Lowell has been moved to a Hospice Care Center in Sandusky, about 45 miles north of their apartment in Ohio.  Mom is able to stay in the room with him, sleeping by his side in a large lazyboy chair.  They are getting his pain medication under control... as the patches were no longer working for him.  She will let me know more in the morning after conferring with the docs.  The place is very nice with staff focusing on comfort for end of life care with cancer patients.


We decided to head up north for our second annual New Years Celebration at my sister's tavern.  Last year she and her husband and their brotherinlaw took over ownership on New Years Eve....  and we drove up 170 miles to surprise them with coming through the door in masks and party favors... they had NO idea who we were! LOL Here is a blog post from last year:

This year, Steve and I drove up earlier in the day, and stopped at dad's cabin to snowblow...  nephew Matt had just been there and got most of it done before getting called away for a family emergency for his wife's father.  (hope your dad is doing much better Amanda!)   We drove up the rest of the way to Michigan and checked into the Bicigo Hotel (my brother Butch's house)

We stopped for some good ole Riverside Pizza (it's award winning pizza and voted the best in the whole state many years in a row!)

I can still taste this pizza by looking at the pic!
It has a flavor like none other I have ever had. Yummmmmmm 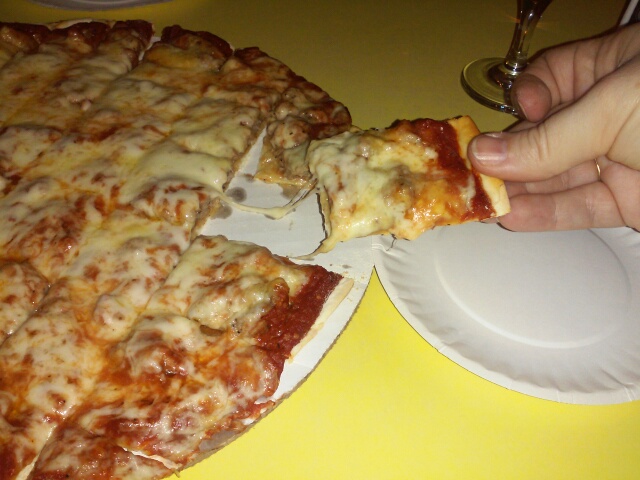 We found this fun video game with an exact likeness of Steveio,
My Brawny Lumberjack Man! 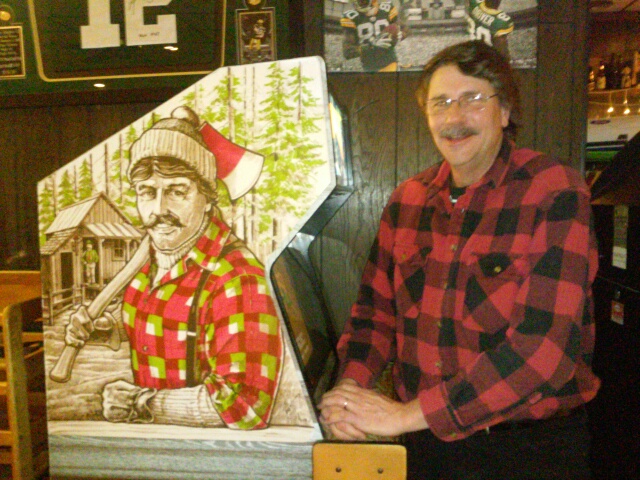 Our grown kids with their spouses Erin and Waylen, Heather and Jesse, met us over at Bicigo's Hotel... we got our doggies settled into crates and headed out to my sister's bar.

Wheee heeeee  it was fun! 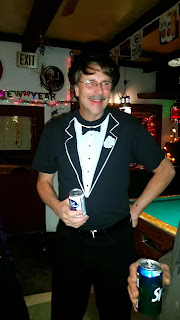 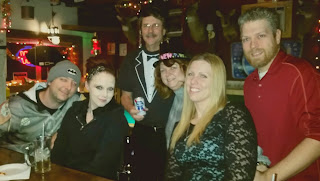 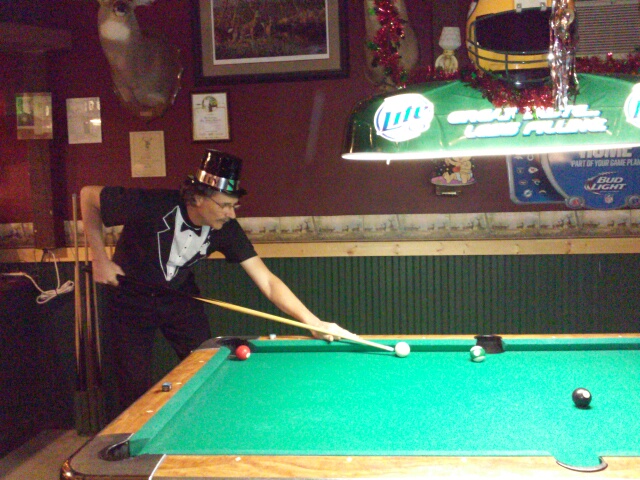 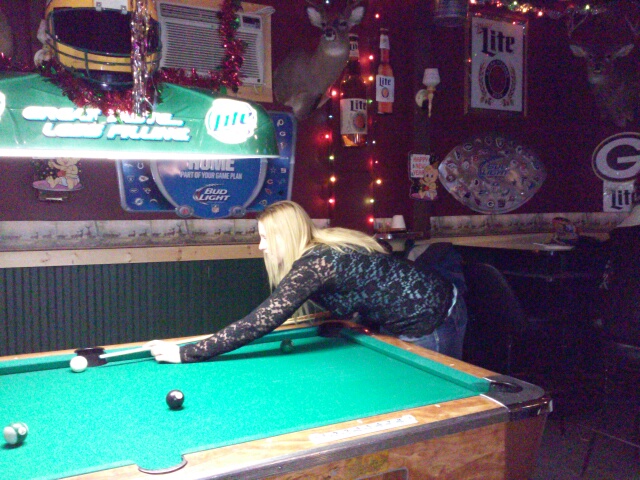 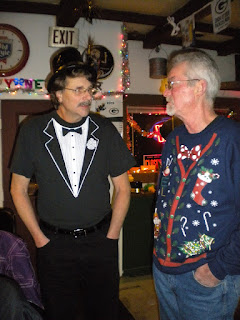 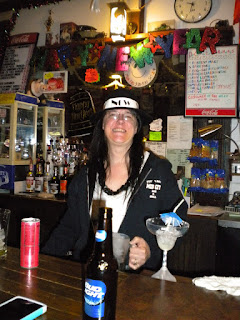 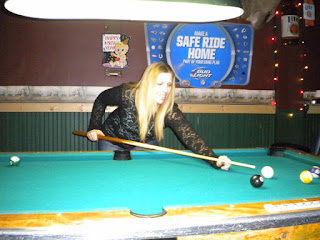 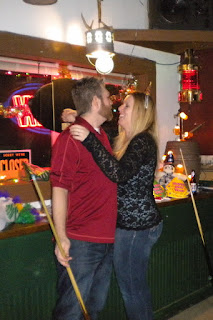 My sister gave bar tshirts to myself and both daughters... 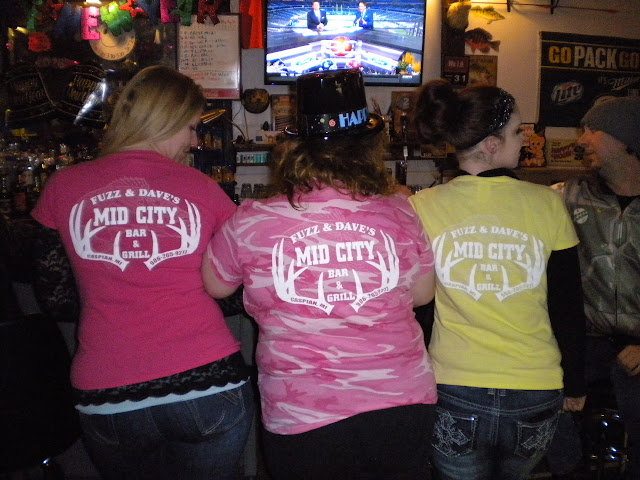 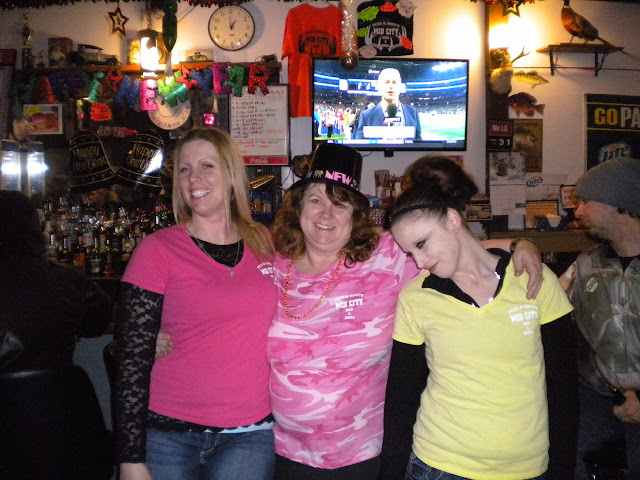 The bar was full of old and new friends, some relatives and of course US!   My sister put out quite an array of free food, with the evening feature, King Crab Legs!   What a nice treat!!! 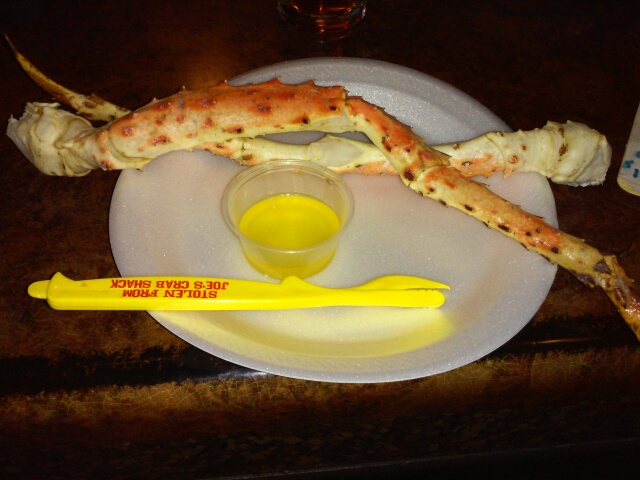 Thanks for hosting a great evening...
Schmoo, Fuzz and Dave! 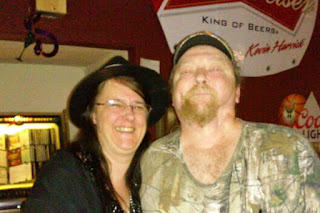 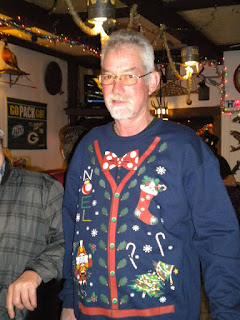 We finished up the Old Year and greeted the New Year with
a kiss, a dance, and then I was the DD home...(Designated Driver) 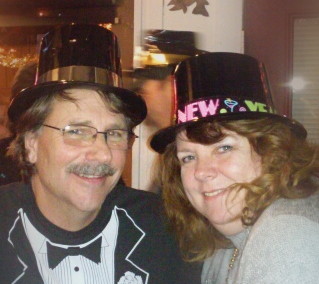 After I safely delivered everyone back to Hotel Bicigo, (and we did see one police officer)
the die-hards stayed up till 4 am playing traditional cribbage around my brother's table...
this is a yearly event.  I went to bed! 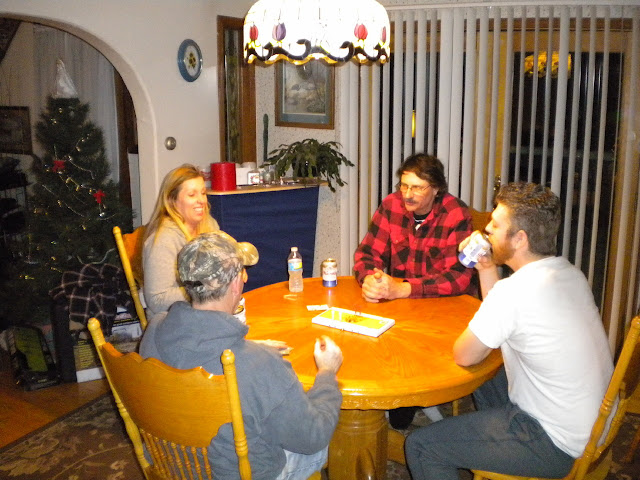 The next morning, I had taken the dogs out for a potty break.... and as I brought them back up into our guest room, Steve noticed one of my brother's cats snuck into the room.  Instead of being SMART and shooing it out with my foot... what did I do???  Yes, I picked it up, and carried it up over the dogs in their crate.  They barked, the cat hissed, and twisted... and I either got clawed or bit, not sure which.   Four spots, one deep into a vein.. OUCH!

I bandaged it up... and later poured peroxide in it.  No biggie, right?

About an hour or two later, the finger started to feel numb. Hmmmmm  then it started swelling.  I put on a bag of ice and we headed on back home to Chilton.  I was driving because a certain Steveio was still under the weather with "New Years Flu"     As I drove on the three and half hours, my finger and then hand started to swell more and more.  I was feeling pain by the last 20 miles.   OUCH!

We dropped off the dogs and we headed on over to the walkin clinic on New Years Day....  turns out all animal bites automatically become emergency room visits!  Oh well, we will meet our deductible on Jan 1 already!  ....  I do not know if it was a claw or a tooth, but the ER staff said it didn't matter, because cats carry a certain bacteria in their mouths that is also on their paws and claws from licking.

They said almost all cat scratches and or bites result in infections!  like 90%!   Sure enough... that was me!
The bacteria in a cat's mouth is called Bartonella, it is responsible for "Cat Scratch Disease."

They took down all the necessary information and we proceeded with treatment.  I was given antibiotics and pain killers and instructions to come back if I see red streaks up the arm. It's going to get worse before it gets better they said. ACK!   They treat all cat scratches the same as bites, because the intrusion of the bacteria is the same.

Sure nuff... it did....   and by Saturday morning I was oozing, in pain, and the hand and arm were puffy too! 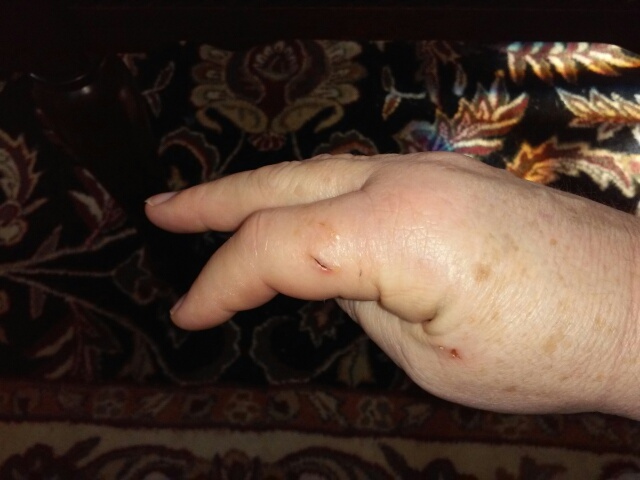 But by Saturday afternoon, the antibiotics were kicking in and I was doing much better....

Here I am this morning, just 36 hours later, and it's amazing the difference!
The swelling is gone, I can feel with the fingertip as well as the whole finger now,
and it's no longer oozing.  The arm and hand are fine too. 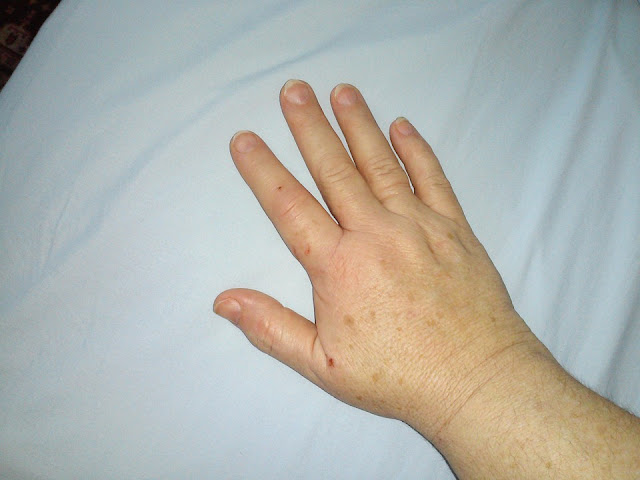 Posted by KarenInTheWoods at 11:02 PM