Stockbridge Critter Sitters Open House --- and a new member to our family????

Sunday we had the chance to attend a great event right near Chilton.  In the tiny burg of Stockbridge is a boarding kennel, groomer and doggie day care called http://stockbridgecrittersitters.com/     Facebook page for Stockbridge Critter Sitters.  The owner, Lisa Martin, also runs the Wisconsin Sheltie Rescue.  So beside the open house festivities, she hosted a silent auction with proceeds going to the Wisconsin Sheltie Rescue Organization. 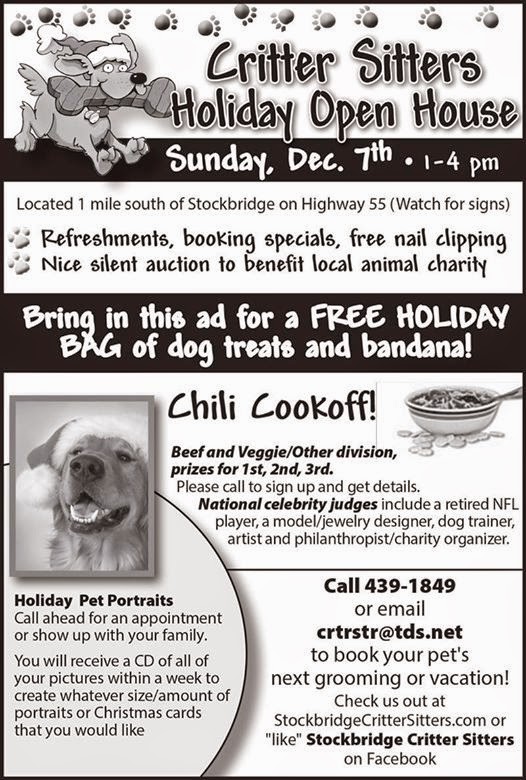 There was a lot of fun stuff going on--- chili contest, pet photos, shopping discounts in the store, refreshments, and Lisa also let me set up my antique circular sockknitting machine! 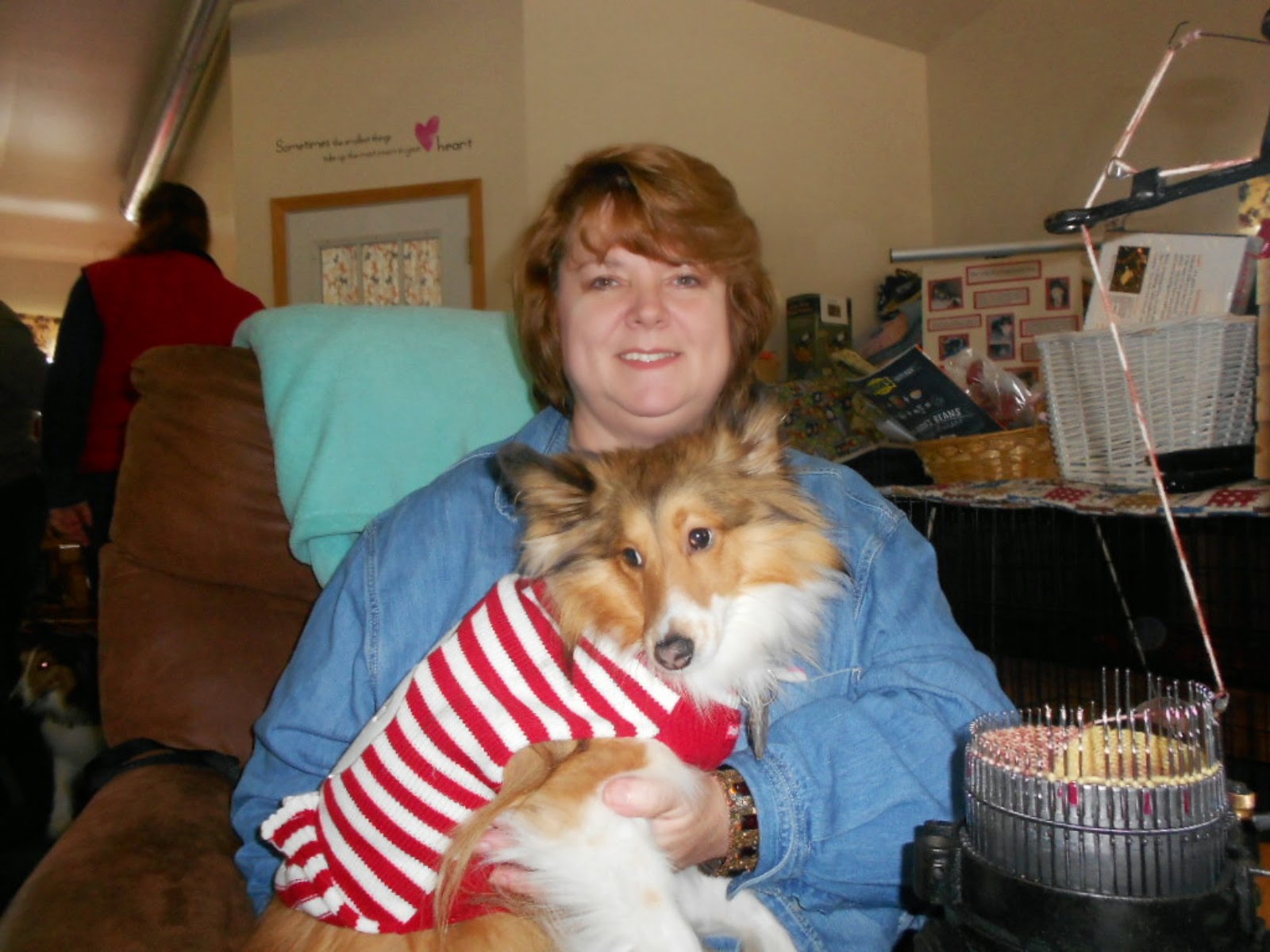 I put up a sign that said 50% of my profits would go to the rescue fund!   Finnegan came along to keep my machine under guard of his watchful eye.... heh heh  he also got a huge doggie crush on a pretty gal named Merlot who also dressed up for the occasion.   I sold a lot of socks, a few hats and even a set of hotpads I happened to have along! 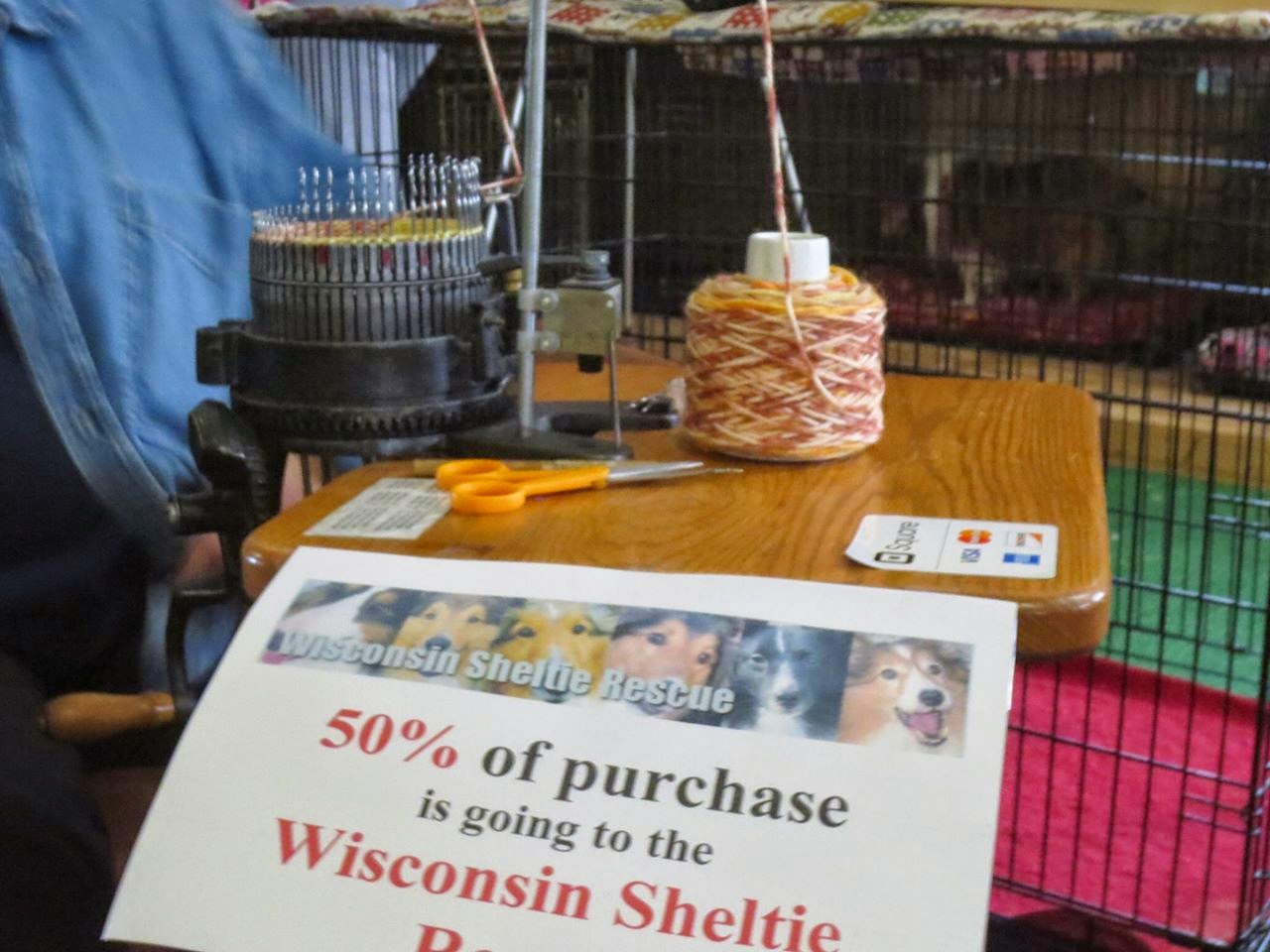 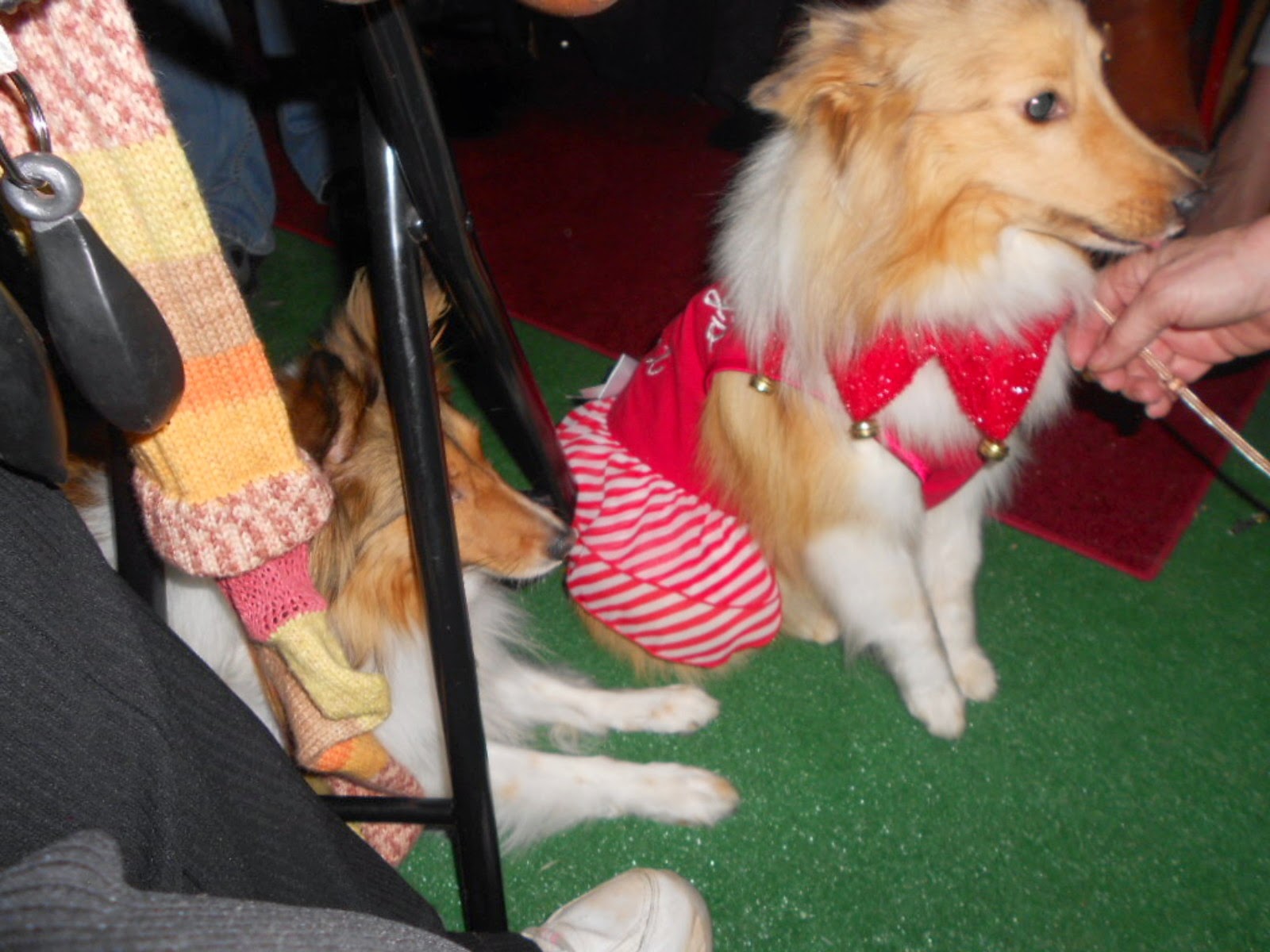 Here are a few snapshots I took throughout the day 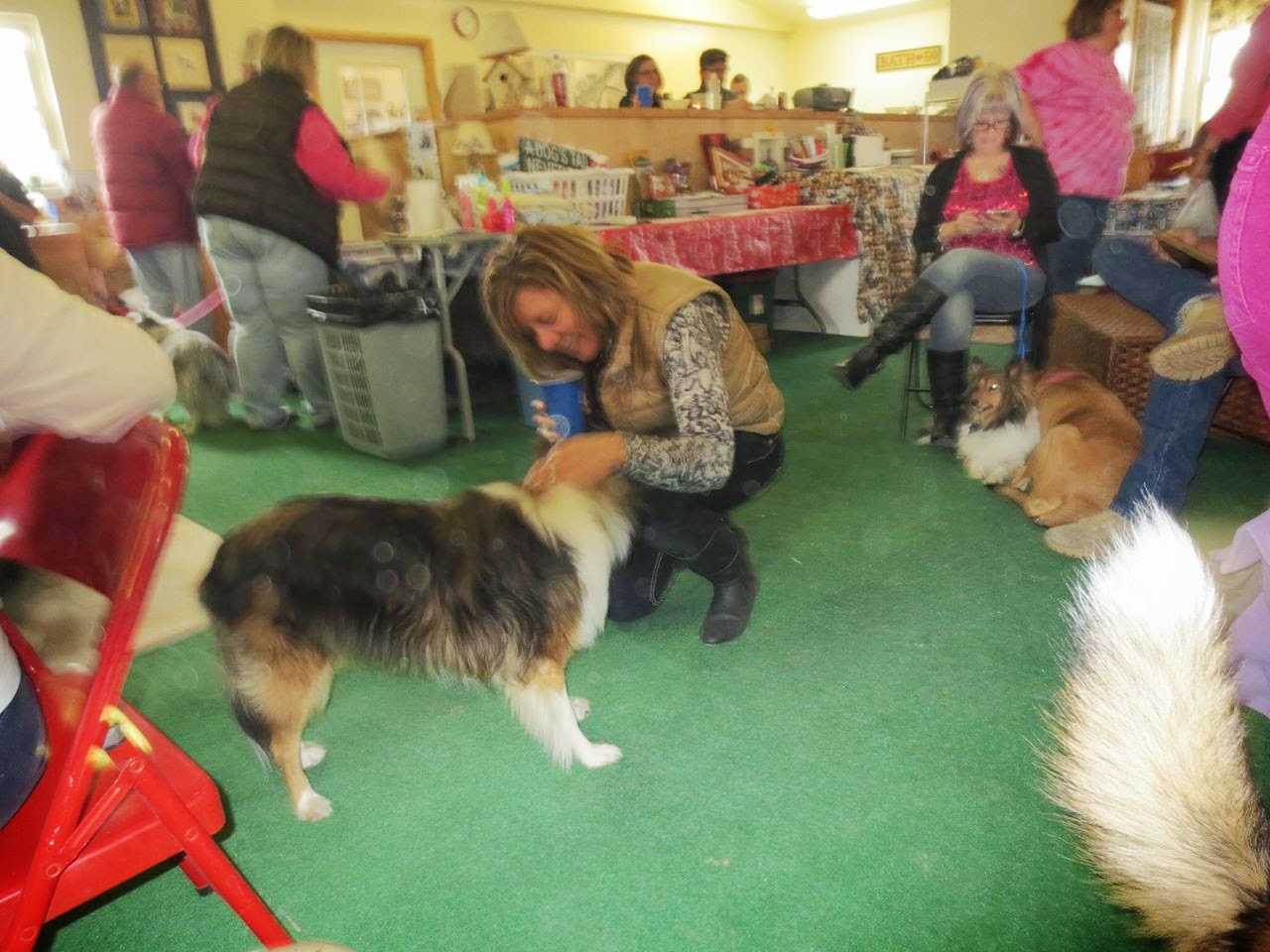 Finnegan was socializing with some of the other dogs and people too
(and begging for snacks!) 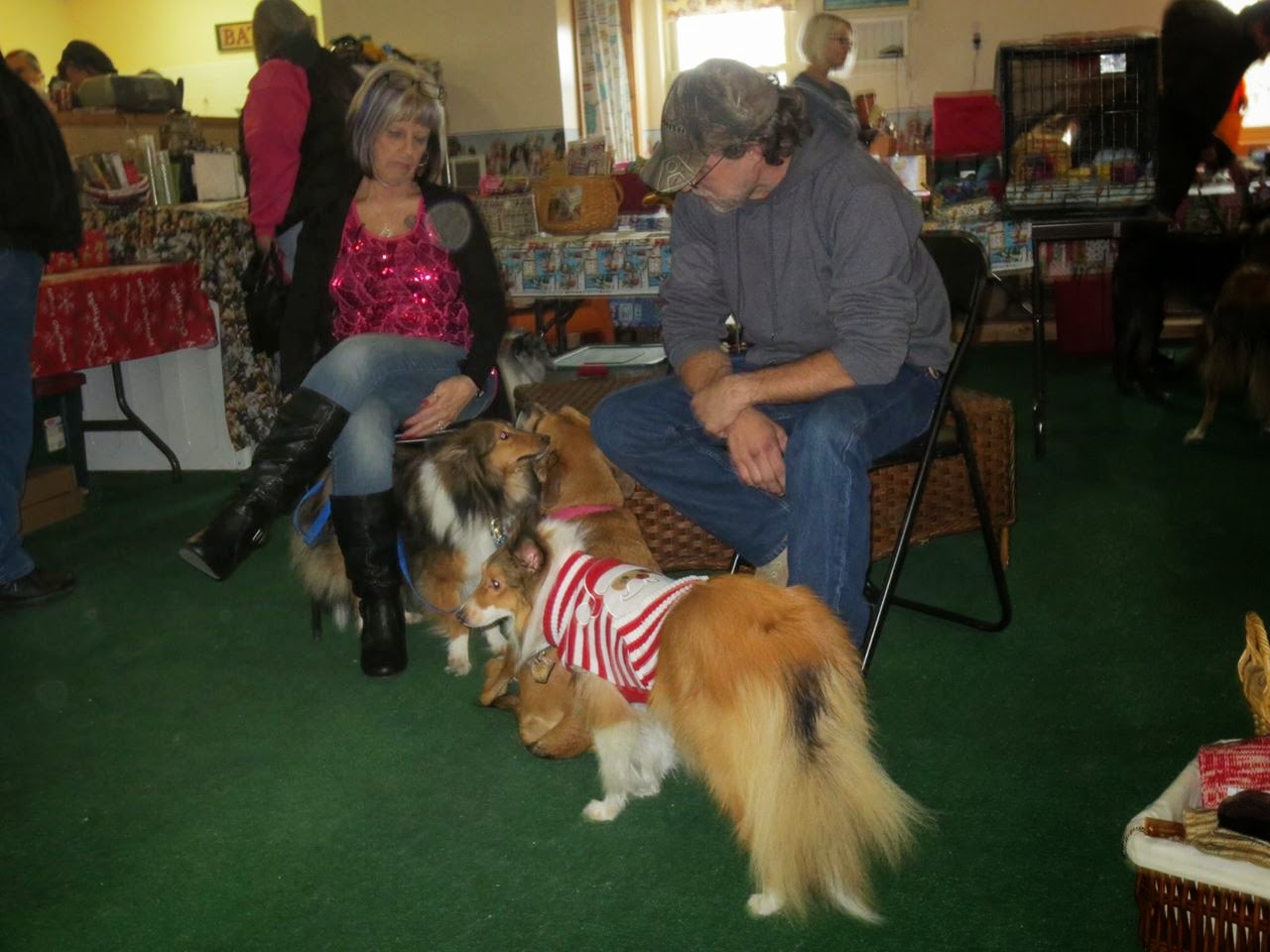 Dogs of all breeds were schmoozing for snacks! 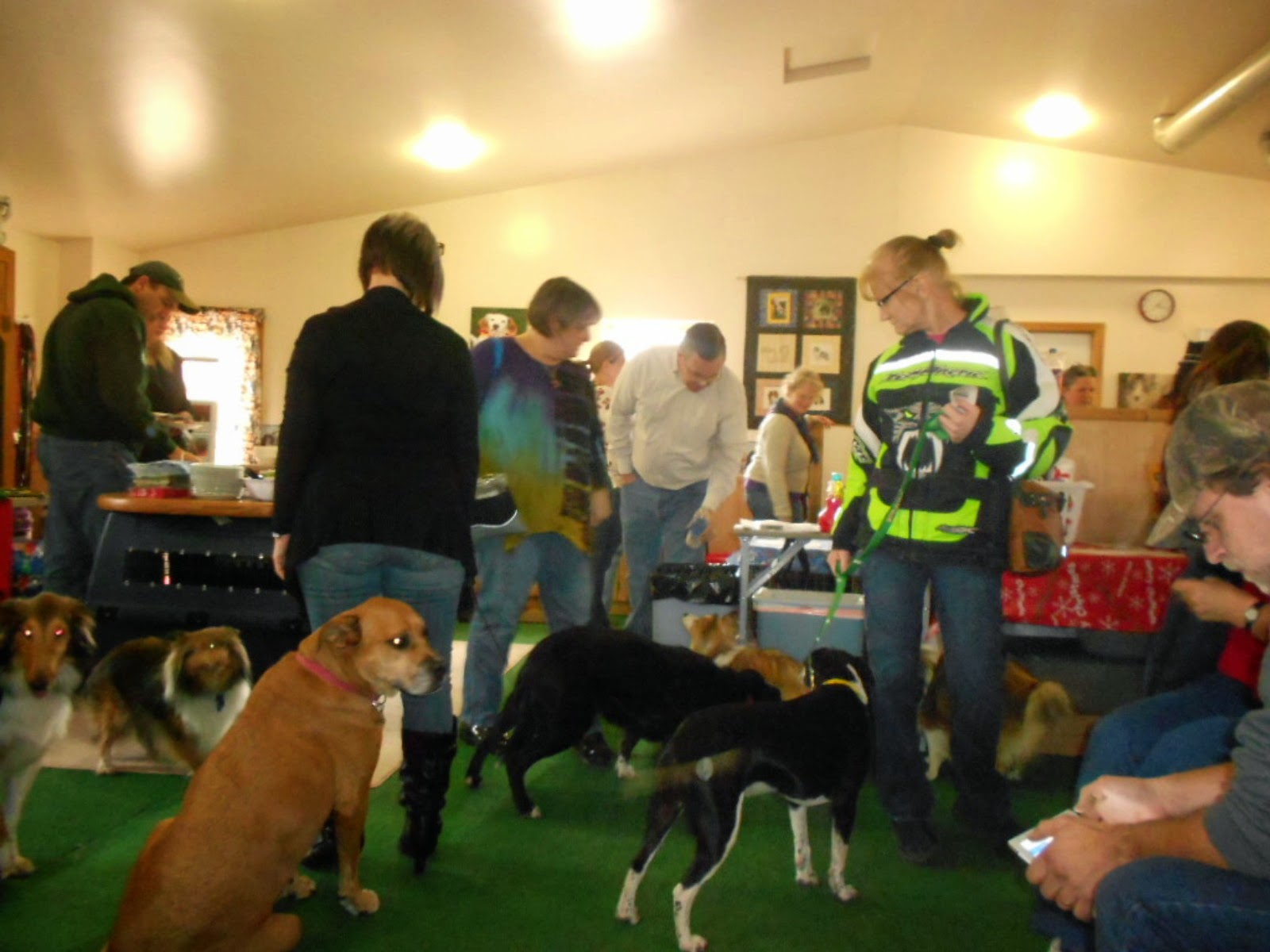 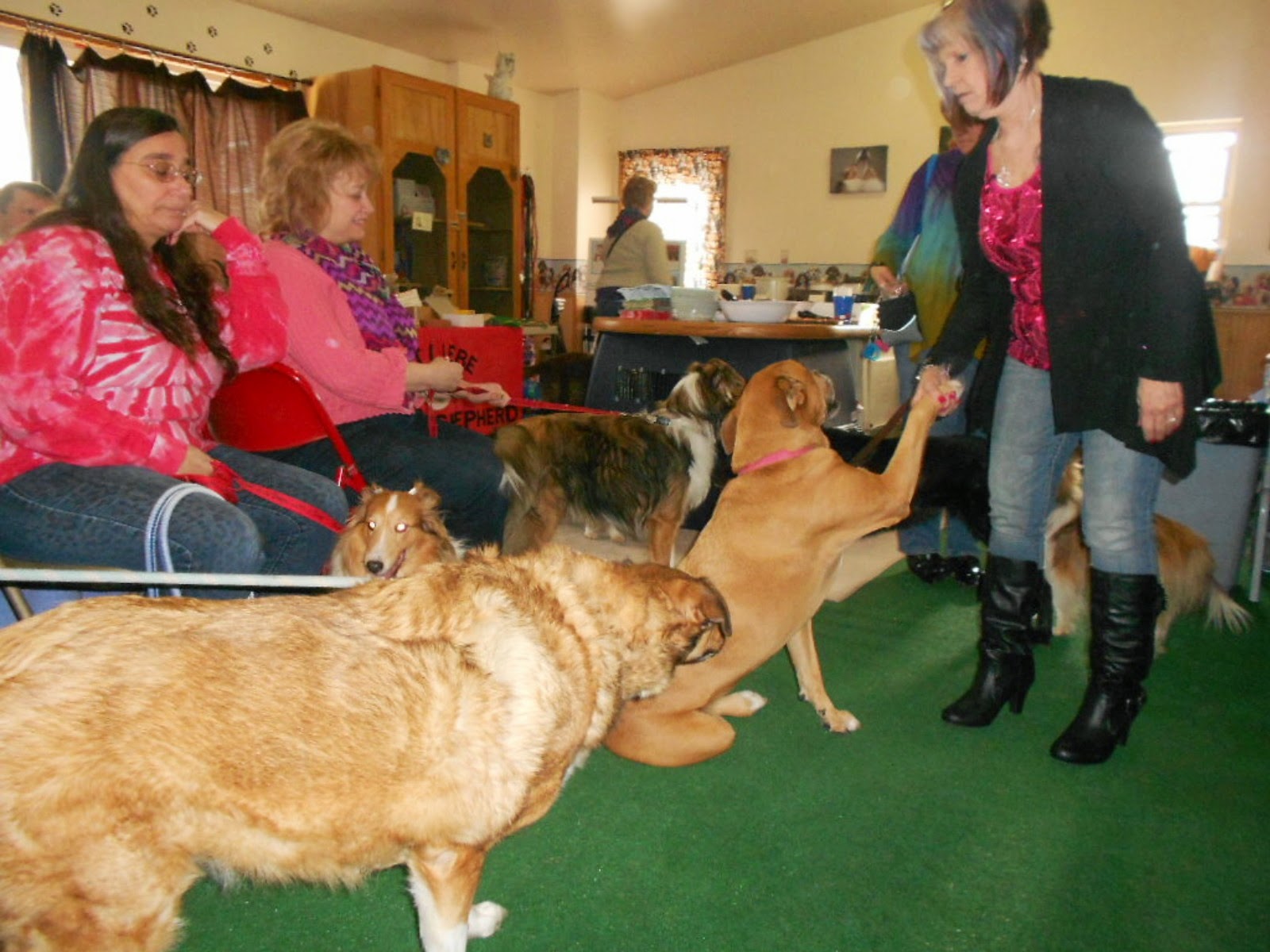 Lisa has a great setup with indoor exercise areas, two outdoor fenced in yards for small and large dogs, and a grooming area besides her little shop of pet supplies and gift items.  Stop on by and check it out--- by appointment, please.  Use the links up in the first paragraph for more information. 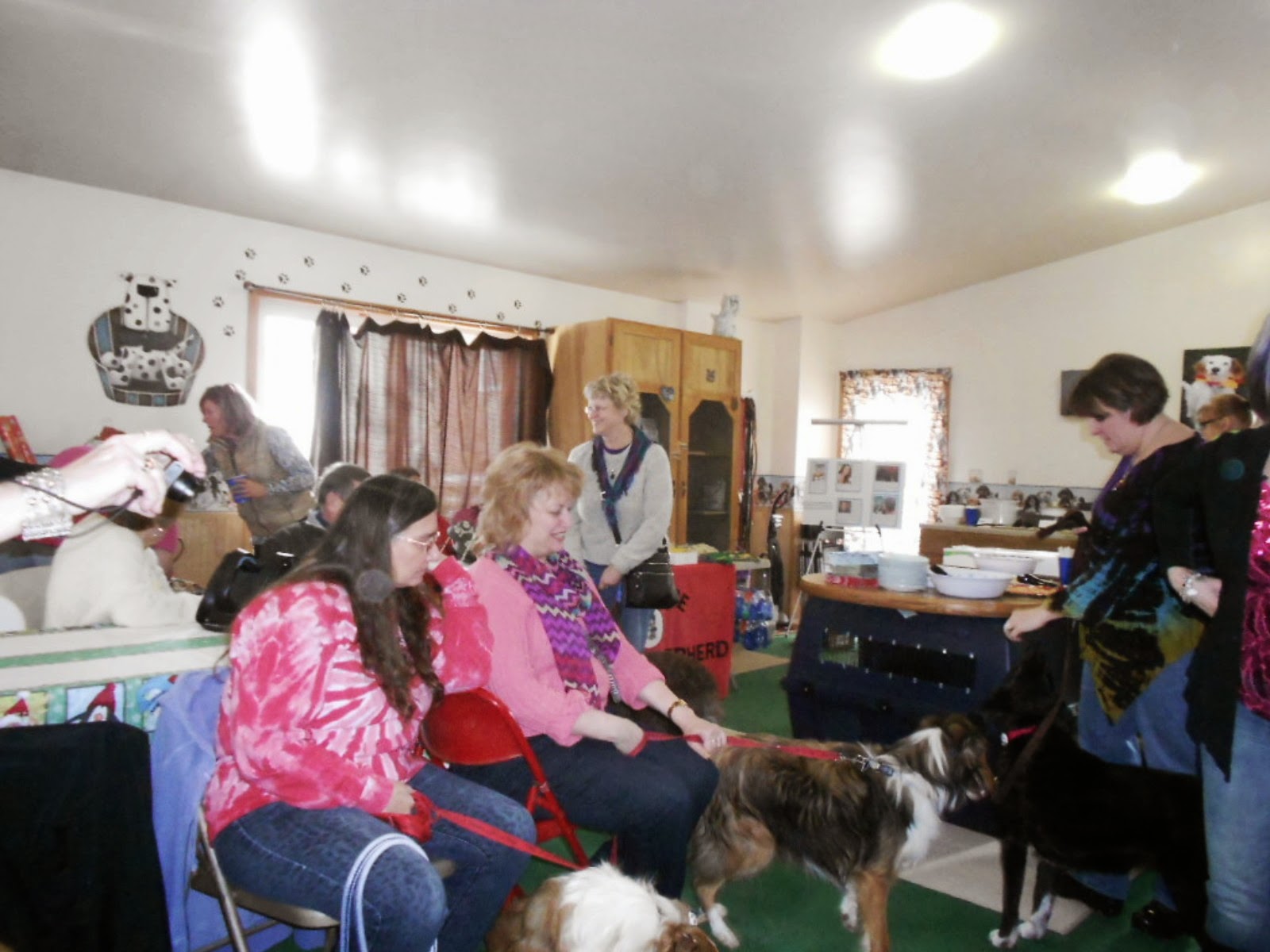 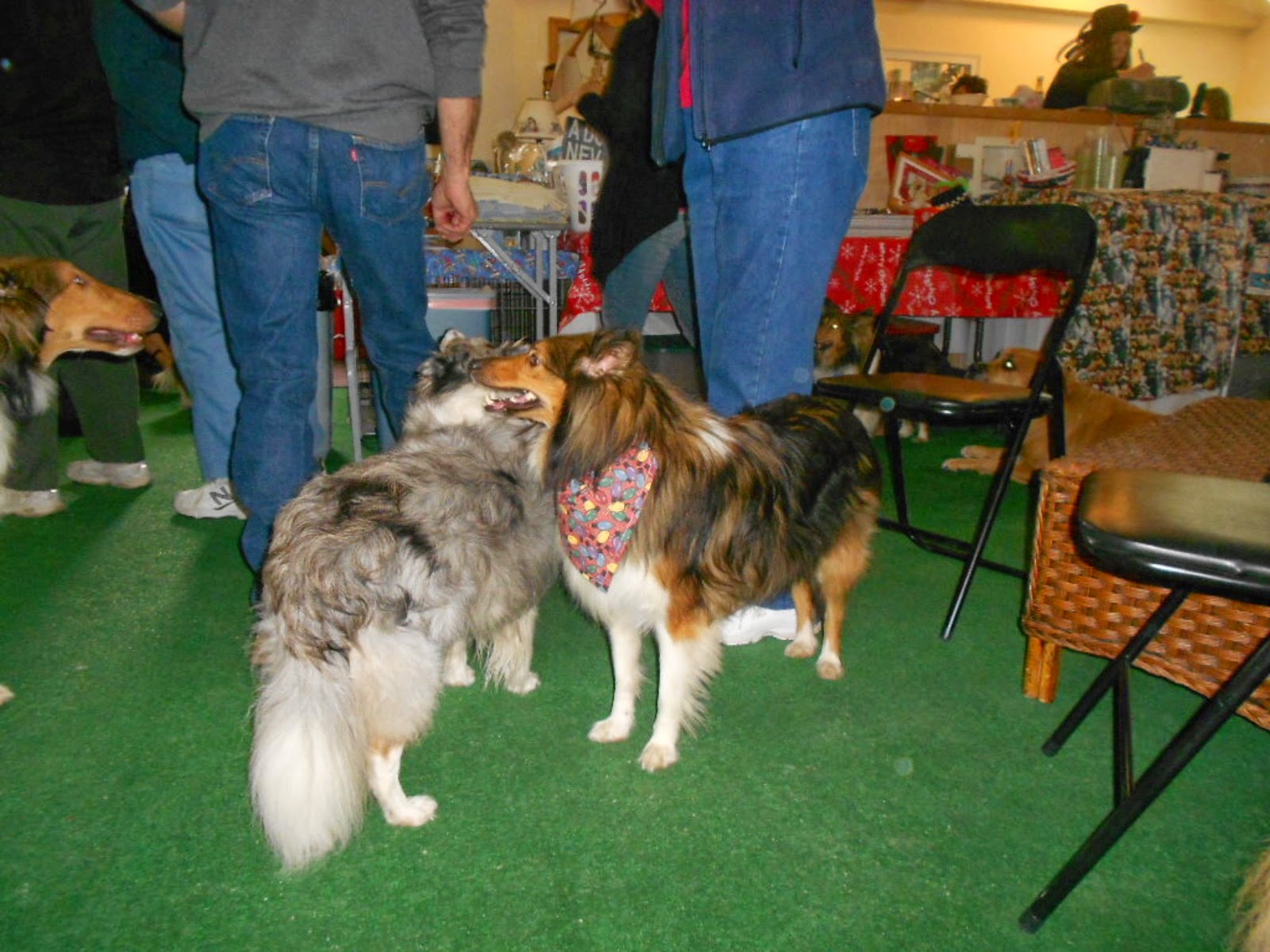 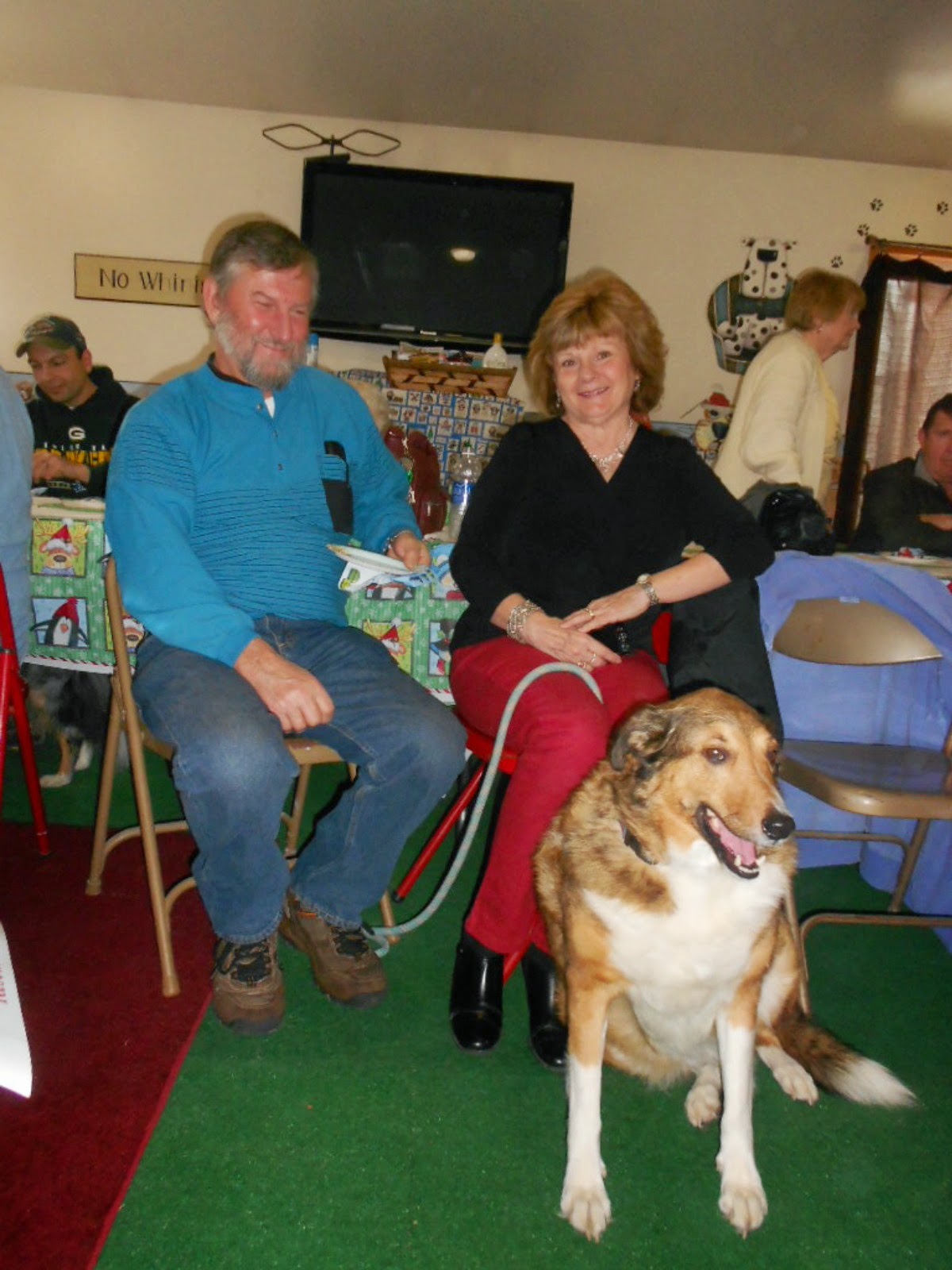 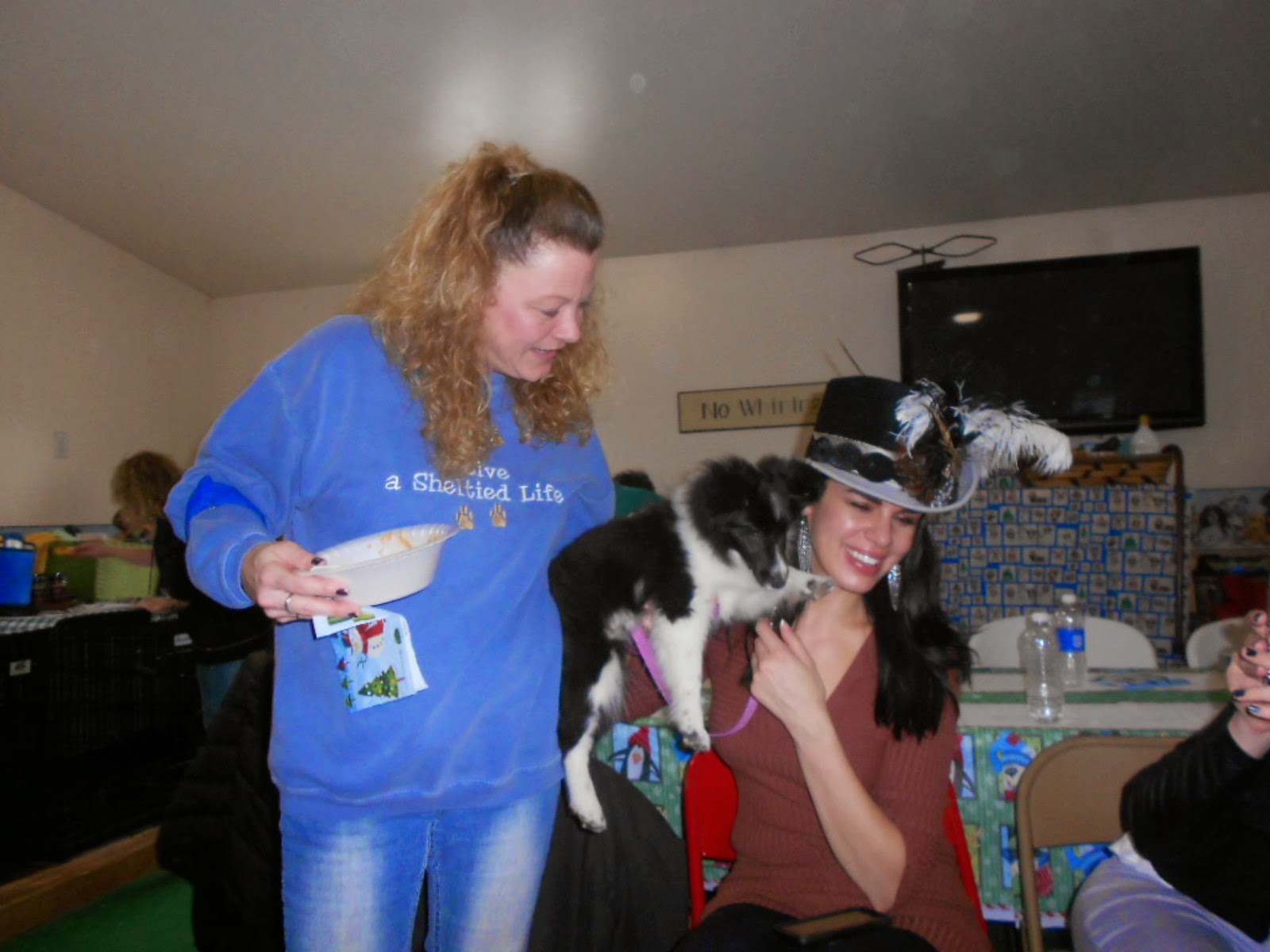 These kids were busy making doggie bone ornaments for their Christmas tree... and were using my little sock machine stand to color them on.  They were entertaining and delightful little people! 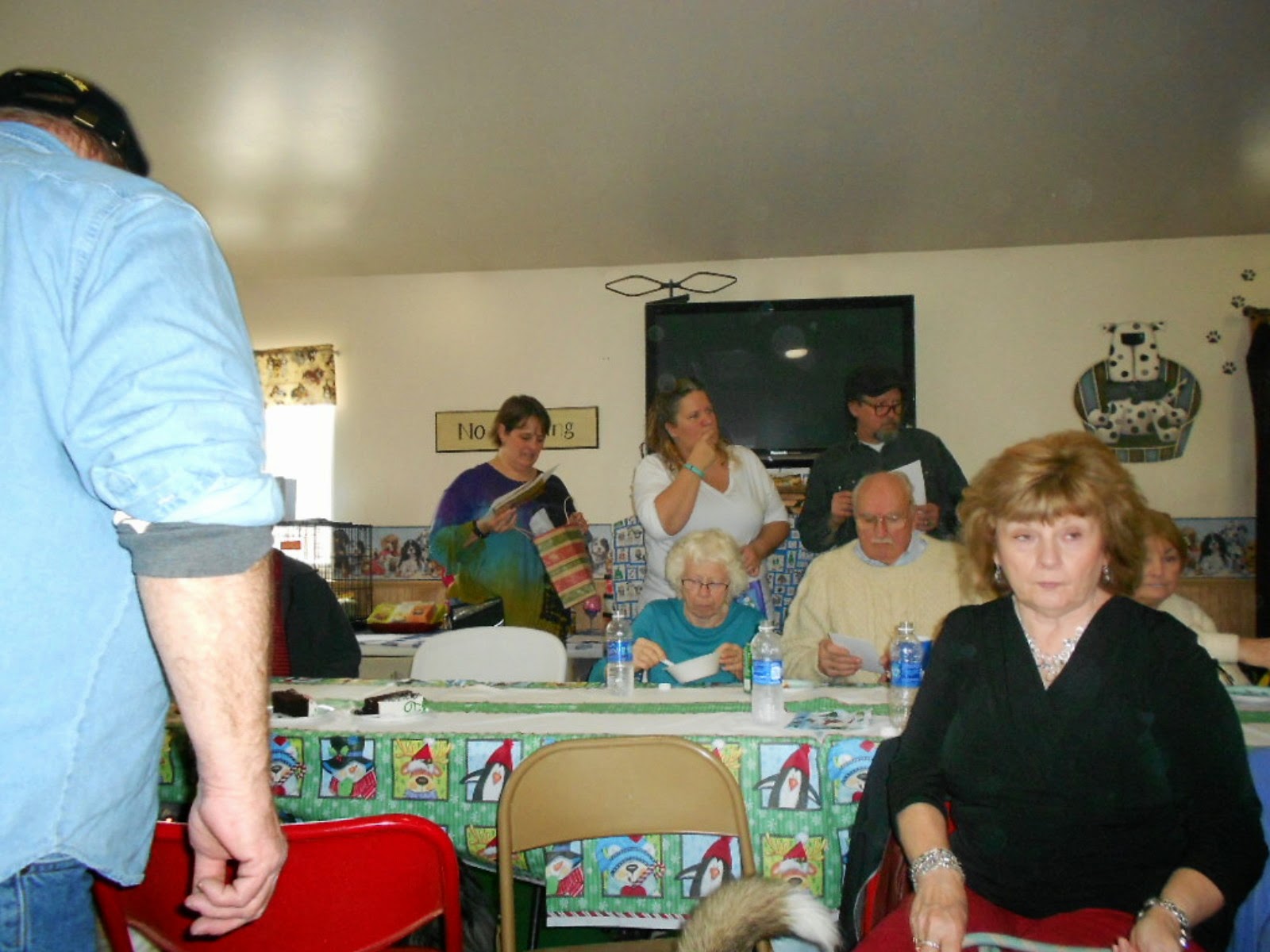 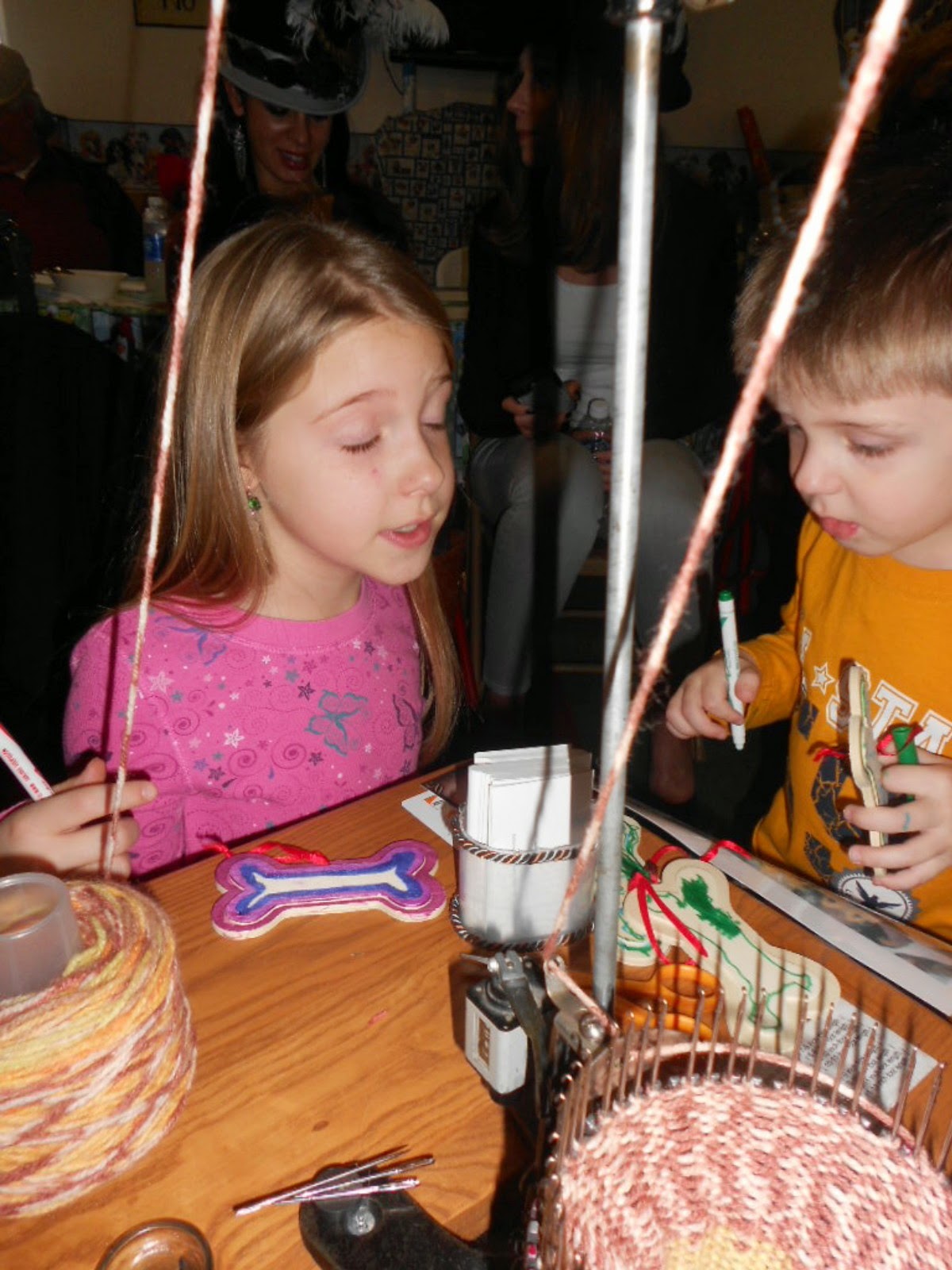 And someone even brought a puppy that needed socializing!
I sure didn't mind helping out---- 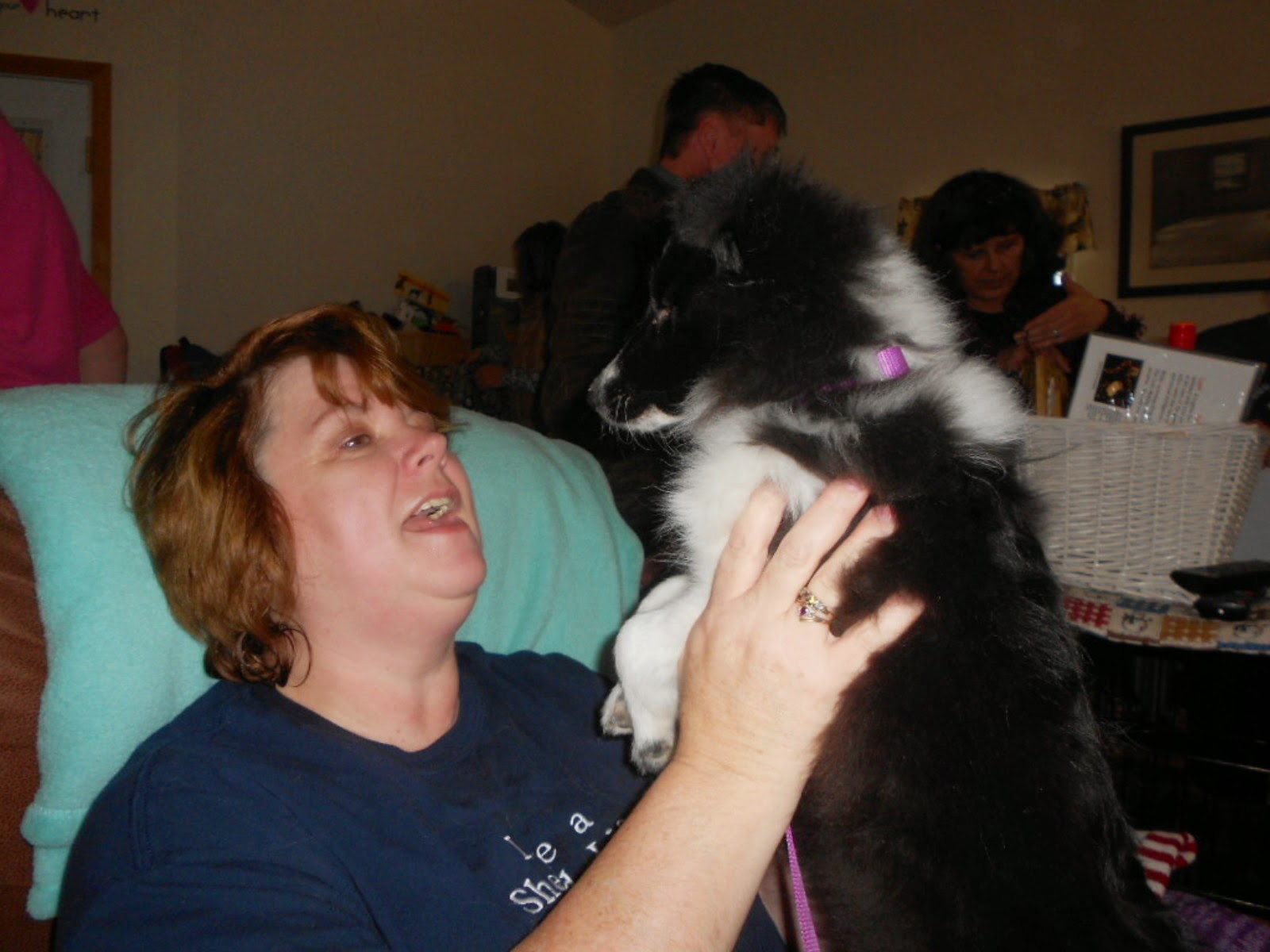 The celebrity judges were fun, and there was a lot of laughter and dogs and people throughout the day. The rescue group made some money to help with vet bills and expenses for the shetland sheepdogs that end up in shelters or need rehoming in our area. Lisa does a great job finding the right dog for the right home for the right people.   Hmmmmm speaking of that.....

Went out to dinner on Sunday night with Lisa and Brittany, the owner of Finney's mommy, Daisy.  While at dinner Brittany asked if we were thinking of getting another dog since Duke has passed away.  I said "Hmmm not sure. I think Lisa would know that before we do!"

Was I ever right!

I had arranged for Finney to go to the Stockbridge Critter Sitters Day Care on Thursday while I went up to two of the grandkids school concerts during the day.  Since I would be gone for 8 hours, I thought Finney might like some company of other dogs at the daycare. He's been pretty lonely since Duke is gone.  It was his first time attending.

What I didn't know until the night before that Lisa just got in 3 dogs from Michigan needing placement in homes!  Hmmmmm  Well, I saw a pic of a little sweetheart and my heart jumped up in my throat!  I couldn't hold back the tears at my eyes as I showed the pic to Steve when he got home from work.  Then Lisa posted a video of the little girl so I could see her in action.  Little Debbie was needing us.  I could tell.

I knew she had a really rough start living in a dump with a hoarder in Midland Michigan. Finney's mommy was from there too!  He was actually conceived while still in that "hell hole" inside of his tiny 6 month old Mommy, Daisy. After the place was raided and the shelties seized, then a tiny 8 month old little Daisy gave birth to a litter, of which one was Finnegan!

Here are some links of that horrible situation and all of the work that the rescue groups did to take care of all those malnourished mistreated shelties... 38 live dogs, 2 dead dogs, and soon many of the pregnant females had litters after the seizure!   And the horrid woman who did all this? She pleaded insanity to avoid the felony charges!

Well, now back to Little Debbie-----  when she was seized she was skin and bones and had positive heartworms. She then got good vet care by the Michigan Sheltie Rescue Groups, those saints with gold halos!  It took a long time, lots of vet care, and of course lots of money to help bring her around. She was about 1 year old at the time, and now is between 2-3.  Michigan Sheltie Rescue leader Carol S kept her safe and fostered her in her home all this while.  It was time now for Little Debbie to have a real home.  A Forever Home.

Another kind volunteer, Ginny, and a friend of hers, drove all the way to Grand Rapids, MI to get three dogs to take back to Wisconsin.  The dogs arrived in the afternoon on Wednesday, after I had already made a playdate appointment for Finnegan for Thursday. I had no idea they were coming! But when I saw the photo of Little Debbie that night, I just could not wait for Finnegan to meet up with her the next day at his playdate, and see how they got along.

Finnegan got to spend the WHOLE day with her at the Critter Sitters, and they spent time together in a crate too while the other dogs were doing their fun stuff.  Some "bonding time" Lisa said!  LOL  She is a little lighter in color and standing in the back, Finney is laying down up front. 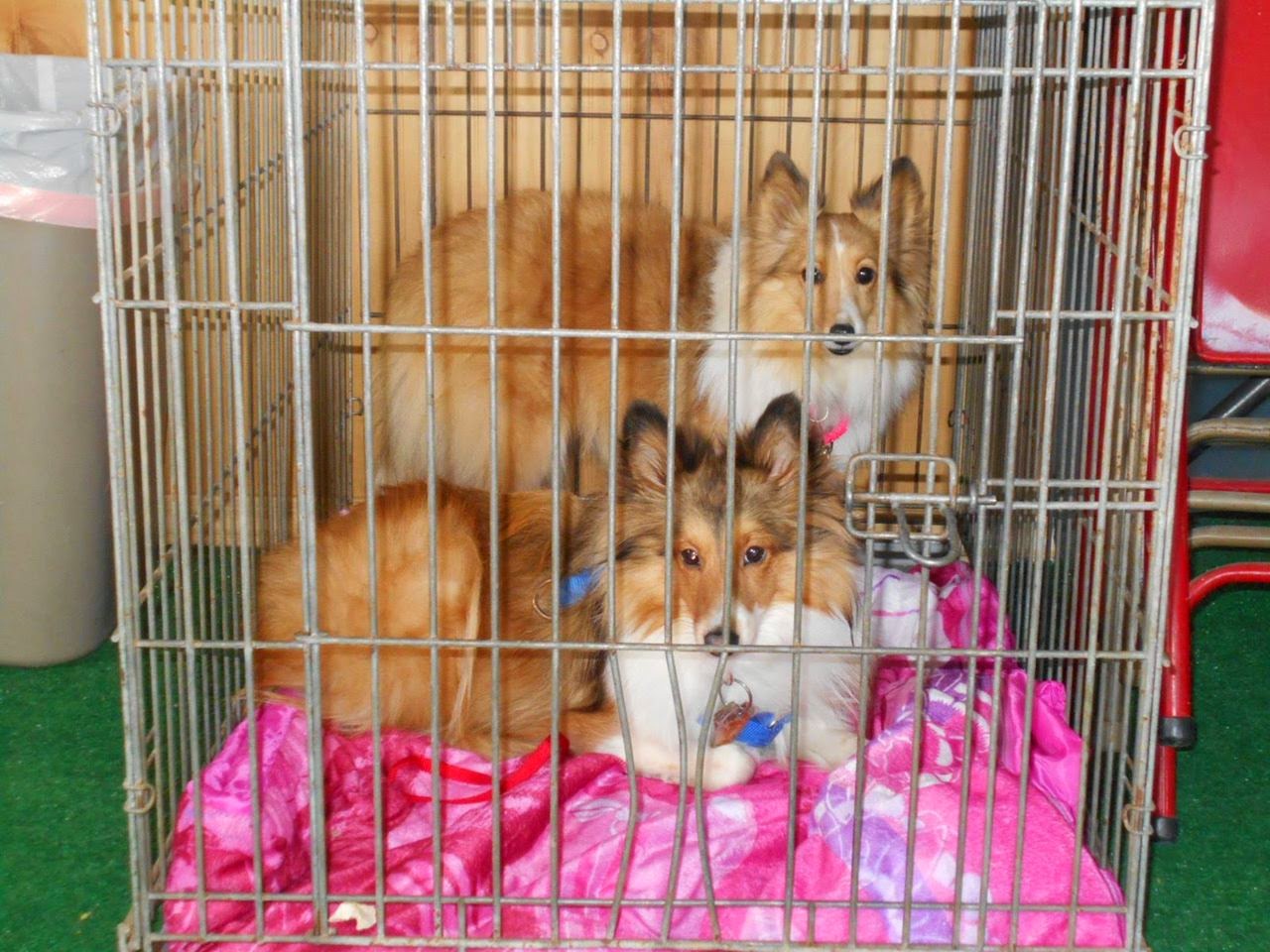 After the Grandtot's Christmas concerts were over up in Oconto (more about that in another blog) I rushed back down to Stockbridge Critter Sitters to see the result of Finney's play date.  YAYYYYY  they liked each other!   Steve was able to stop by too on his way home from work. So he got to snuggle her and cuddle her up.  Lisa was going to head out on errands, so we made a quick decision to host a "sleepover" at our house... nice and quiet and see how they get along.  Like a "fostering situation" 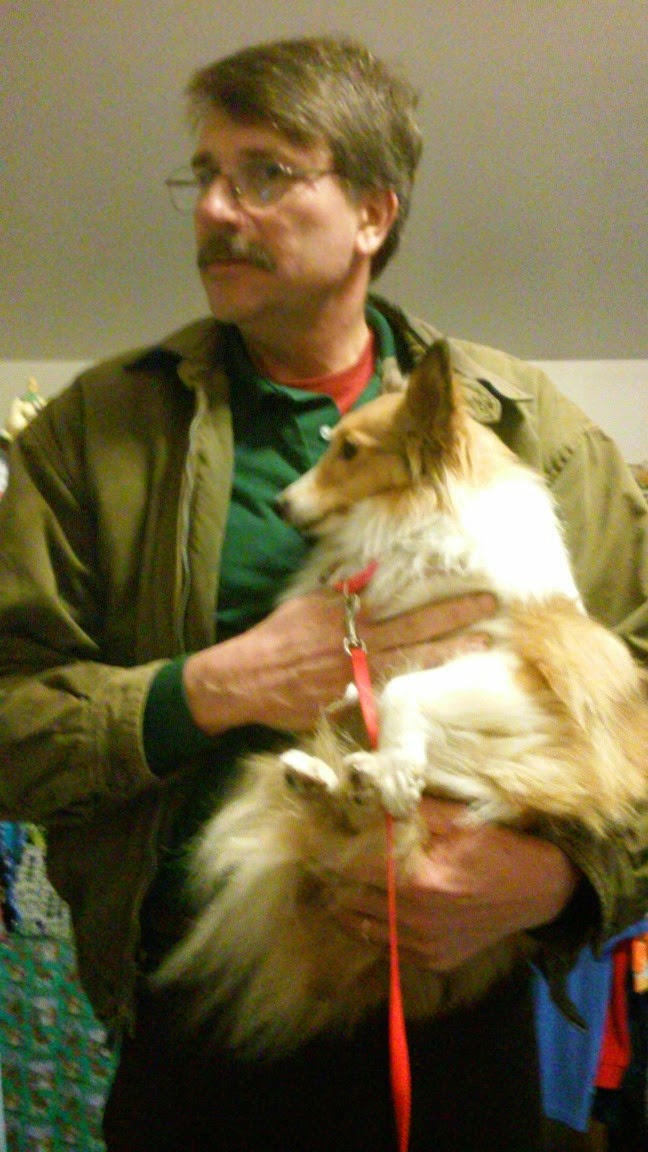 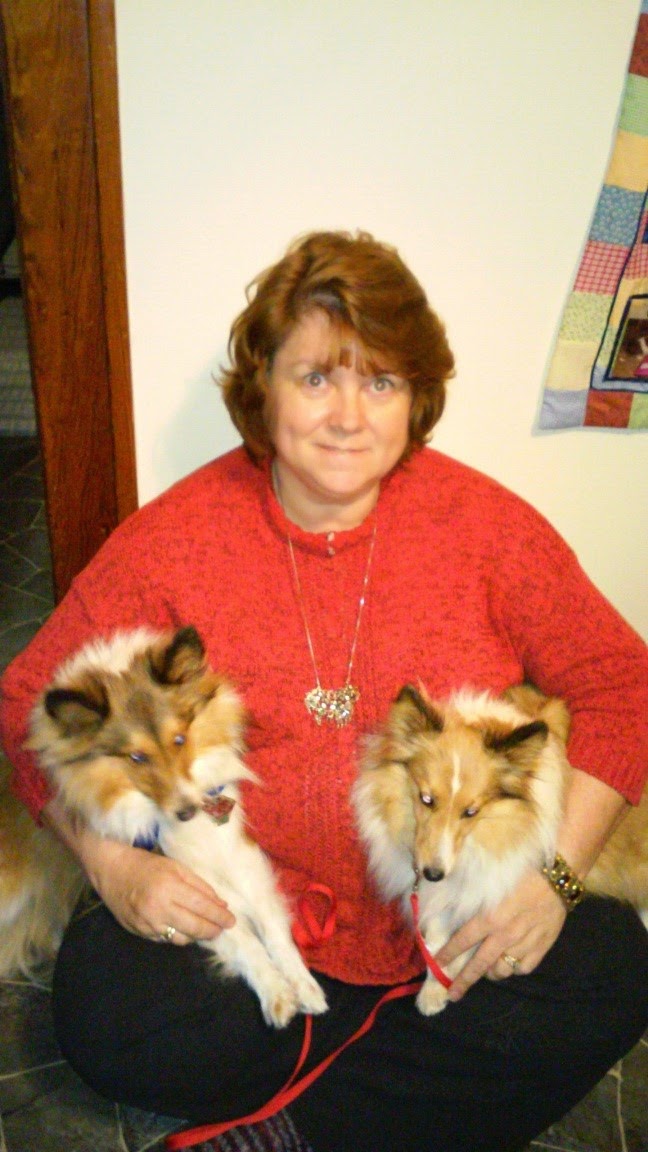 Well, I admit it. I am a Foster Failure!   I decided that this little girl was going to stay here FOREVER!   Steve cuddled her and played with Finney so he wouldn't be jealous.  She tenderly explored our house a room at a time.  Finney wanted her to romp and play, but she is just a bit timid yet.  She slept in her wire cage set up alongside Finney's bed, at the foot of our bed in the bedroom.  Not a peep out of her!  I looked down during the night and Finney's body was pressed tight to the wires on her cage, and she was laying tight to him from the inside, fur touching. Awwwwwwww  I think tonight she can sleep out of the cage.

By morning, we all three cuddled on the couch with our coffee, computer and watching the news... Steveio had to leave for an early doc appointment, but came back to snap this pic of the three of us! 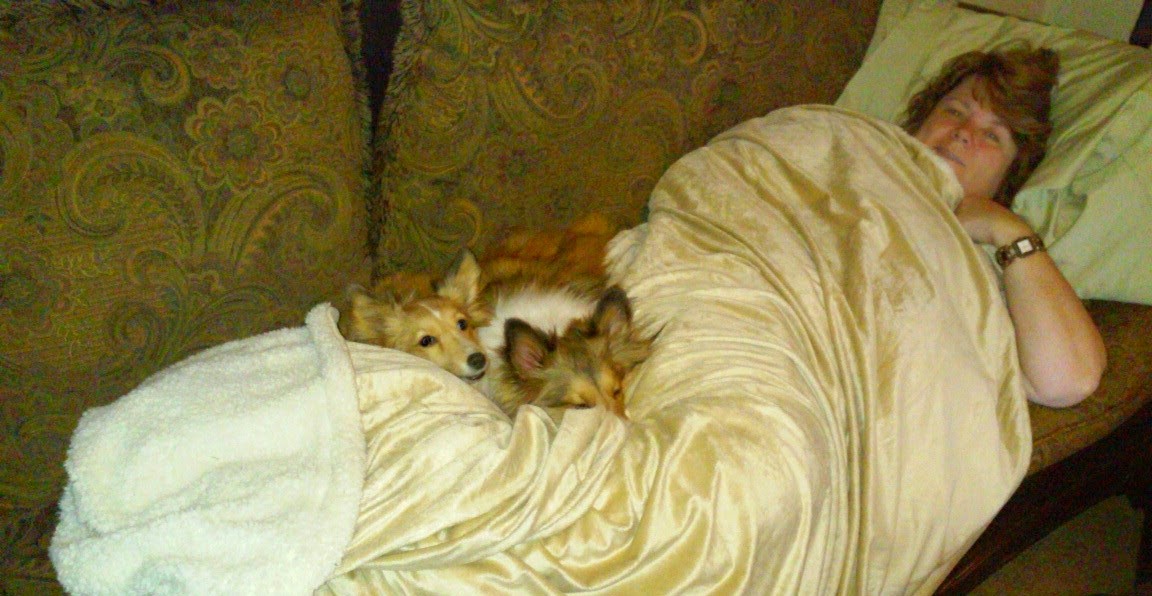 Yup... it's official
She is now a part of our family! 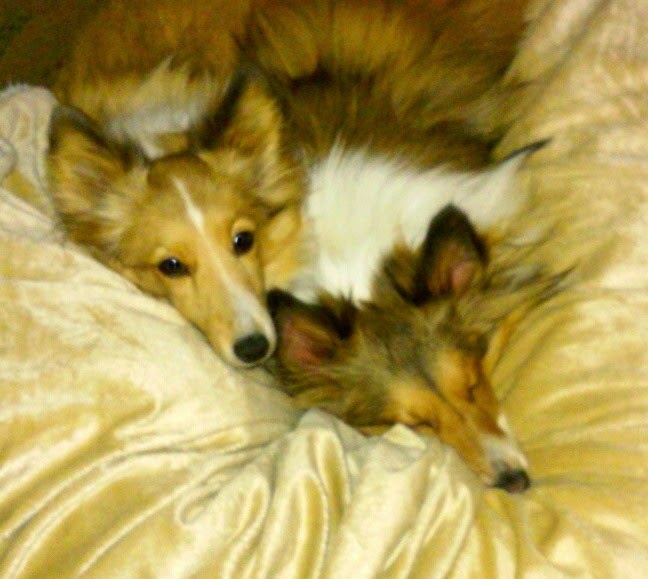 We are considering changing her name from Debbie to Binney....  many times we would say to Finnegan : "Finney Binney, but we don't know what a Binney is?"    Well, now I think we know! It's our new family member!

Posted by KarenInTheWoods at 7:07 PM