Oil Change on the Motorhome and Chilton City of Lights Parade

Catching up on things that I meant to blog about....  since we were sick for so long, I really didn't feel like blogging much.  Now I have multiple topics to catch up on here.

First is the oil change and filter on the motorhome.  It needed to get done before we head out on a winter vacation, and best to be done while the weather is kinda sorta warm.  We picked up the oil on sale in large 5 gallon buckets, because our 3126 Cat diesel engine takes 28 quarts of oil!    Neither of us was feeling quite up to it, but a little warm snap was the most opportune time to "git er dun" ... so we did!

In preparation for the oil change, Steve saw this neat 2 piece funnel set at Menards for $3.00.  He figured the threads of the spout were the same size as the threads on the two buckets of oil that he purchased.  We took a chance and bought it and took it home.  Sure enough, the nozzle piece fit! 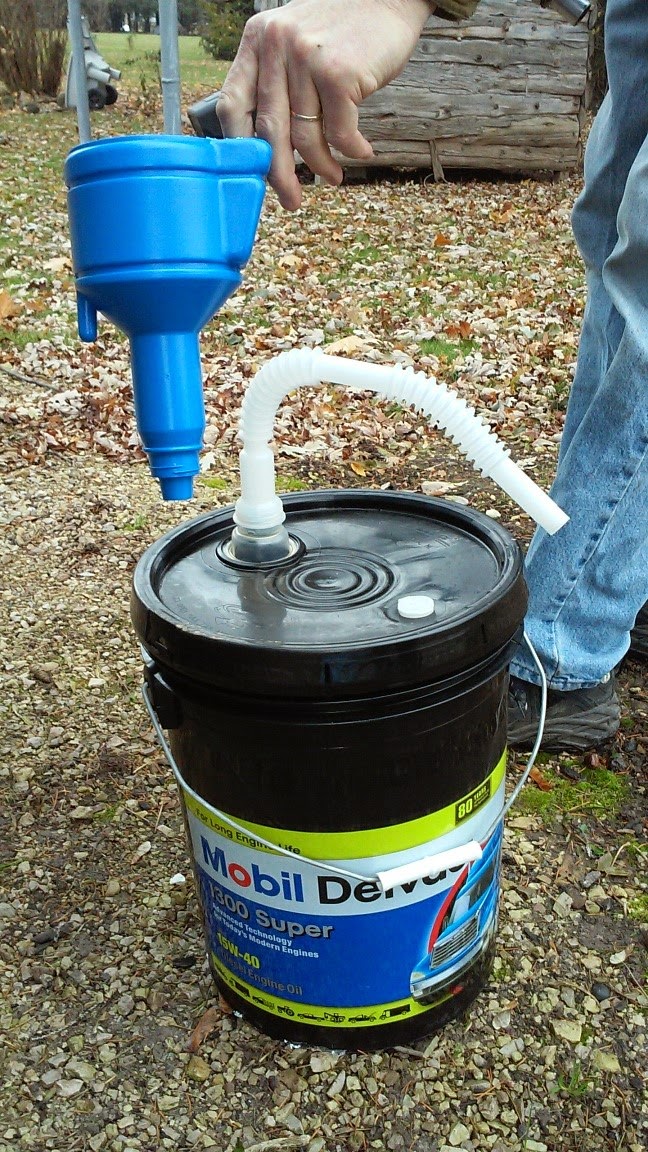 We had just driven home from staying the weekend up at Erin's house, so the oil was still warm.  That is the best time to drain it. Even though neither of us felt up to snuff, we knew it needed to be done. He drained the old oil out and he hauls it off for recycling, and then changed out the filter to a new one. We change the oil every year, even if we only put on 3,000-4,000 miles this past year.  Still good to change it.

Sure made an easier task by just holding up the bucket to pour it in, rather than dumping from the big bucket into smaller buckets to lift up and reach wayyy into the fill port. Less chance of contamination of moisture or dirl getting into it.  I was on hand to help guide the nozzle into the port without spilling a drop!  (and to take the pics once he got it pouring in) 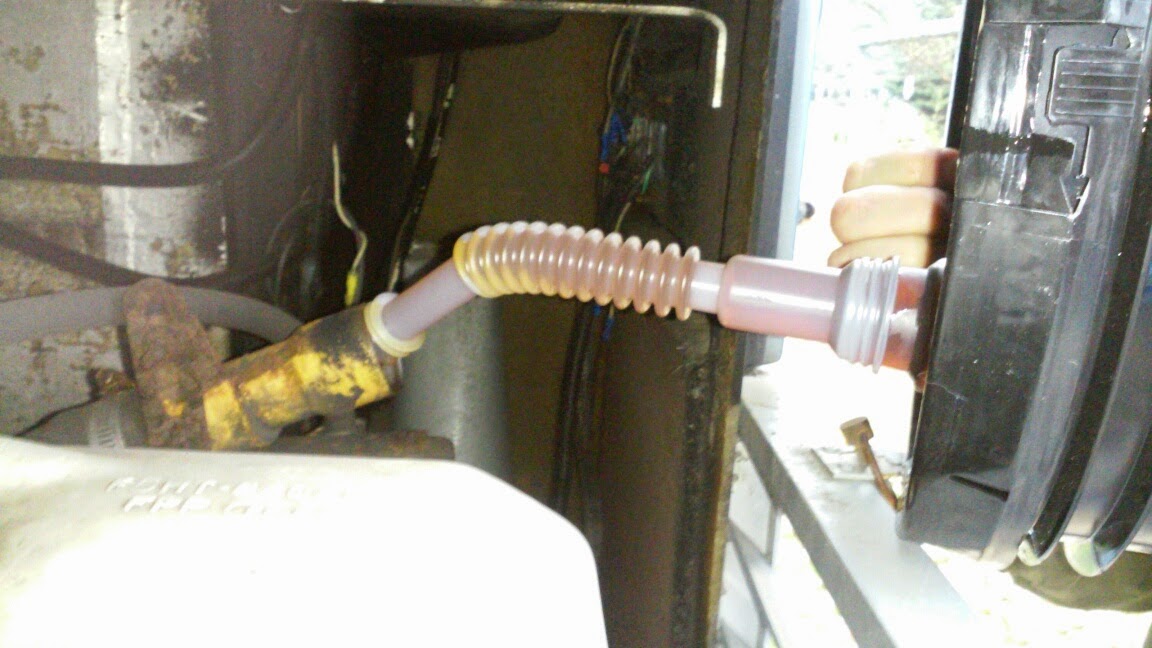 Good thing Steve is strong and can hold the big bucket up there until it's done draining into the engine. I could never do that.  I would be pouring out a quart at a time, or the most a gallon at a time? 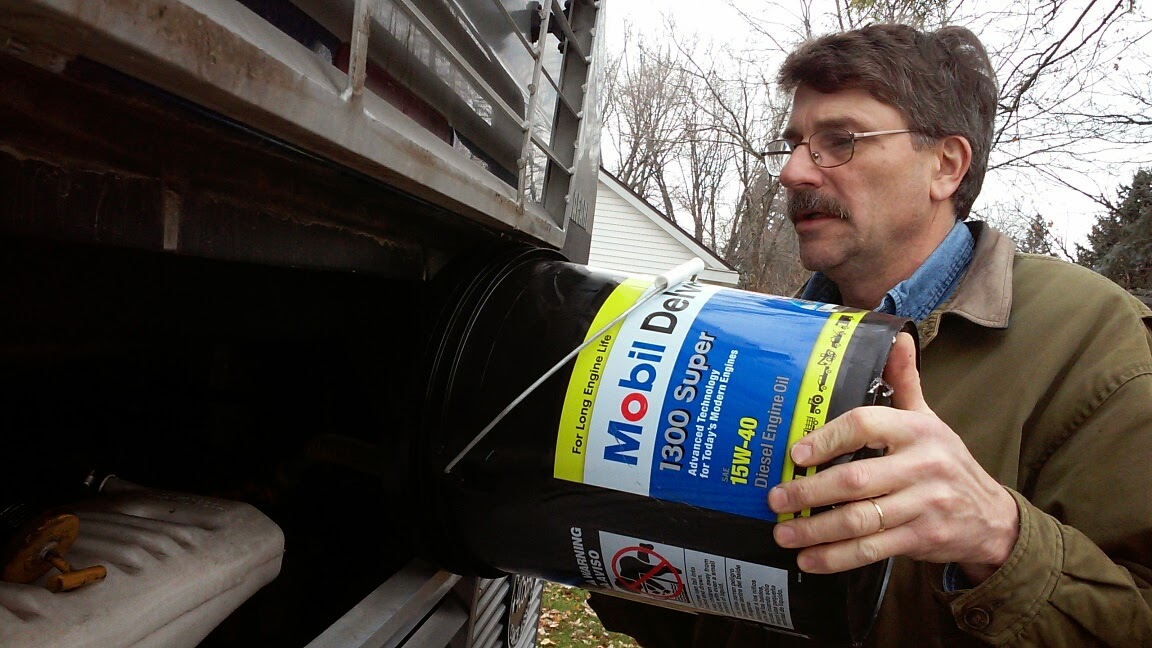 Once he was done pouring in his calibrated 28 quarts, he started the motorhome up to let it circulate the oil through the system and checked the level to be sure.  Spot on.  But he will check it again once we hit the road.

At the same time he also ran our generator to exercise it and put a load on the output by starting up an electric heater inside. Set on high to draw a good load, and then he fired up a roof airconditioner at the same to draw more wattage.  Talk about contrast, heat and cold, but it kept the generator running with a load on which is good.  Good to do that and keep the copper windings and brushes from corrosion.  It's good to run it every month under a heavy load. Because we use our solar panels and battery bank so much, we didn't run our generator enough during the first few years that we owned the rig.  Without enough use, we had to do an expensive rotor rebuild.  Here is the blog post from that project:


Now the motorhome is ready to roll when our winter vacation time comes around.  Toss in some clothes, some food and the dog, and we can escape!

Next topic:
Saturday night our tiny town of Chilton, Wisconsin held a delightful event.  It was called the City of Lights Parade taking place in the evening.  We missed it last year because we were out of town for something. This year we made sure we were in town to catch it.  Waiting a few blocks from our house, we hung out on Main St. but didn't see much going on.  I did take a pretty pic of the lights on the little park in the city center... 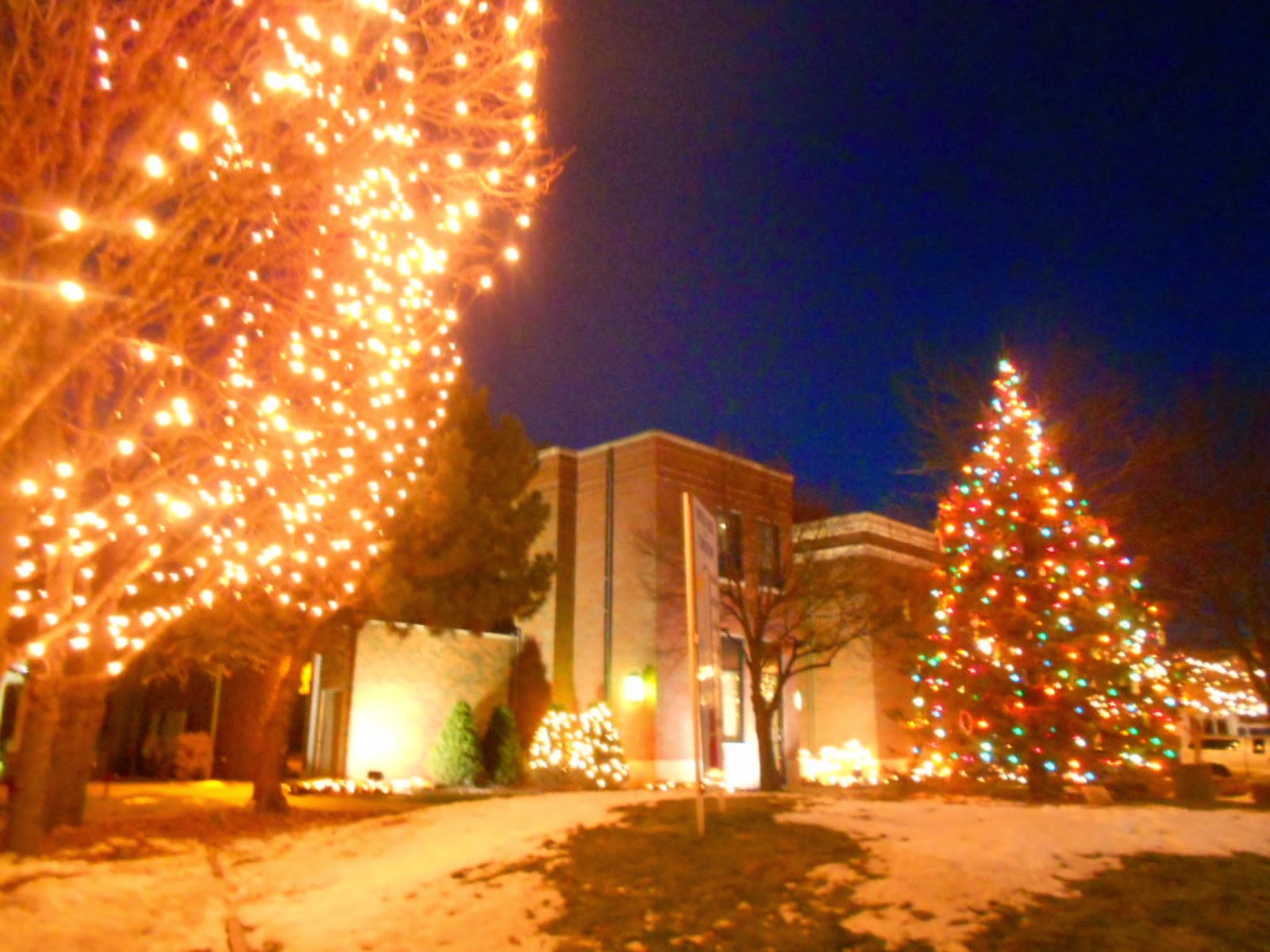 After asking a few people and doublechecking the Chamber of Commerce website, we realized we were in the wrong place!  We found out the parade route was in the other direction and would be passing within 4 houses from our own house, on the corner of Grand and Madison!

We hoofed it on over and made it in plenty of time to watch the parade coming along ....  here is a video clip I made of the entire parade!  Yes, it's a small town, and it's a short parade. Pretty good for a town of less than 4,000 people.  The evening was full of cheer, good wishes, and Christmas Greetings from the parade people ..

If you don't want to watch the video clip,
here are a few pics of the evening.... 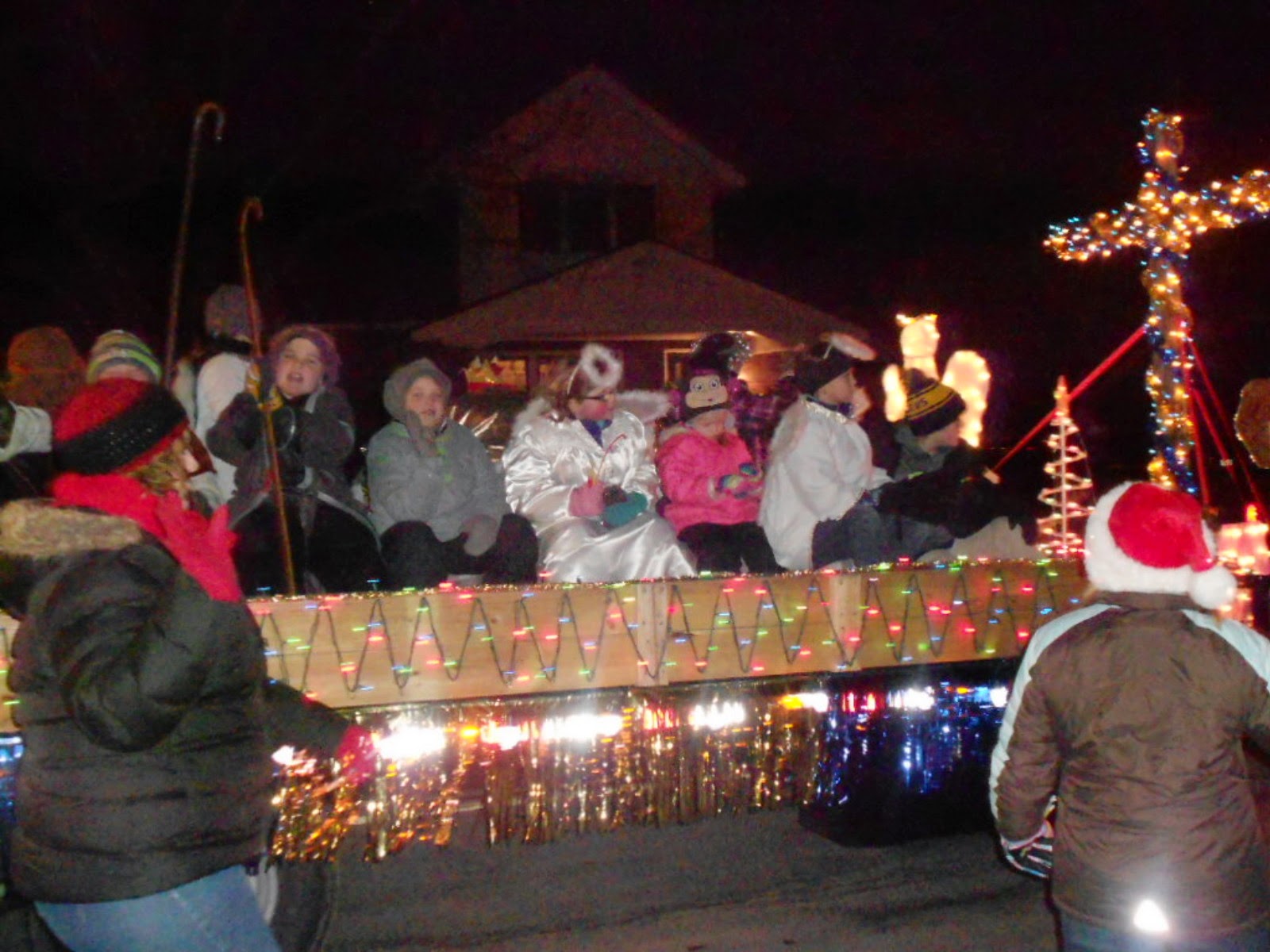 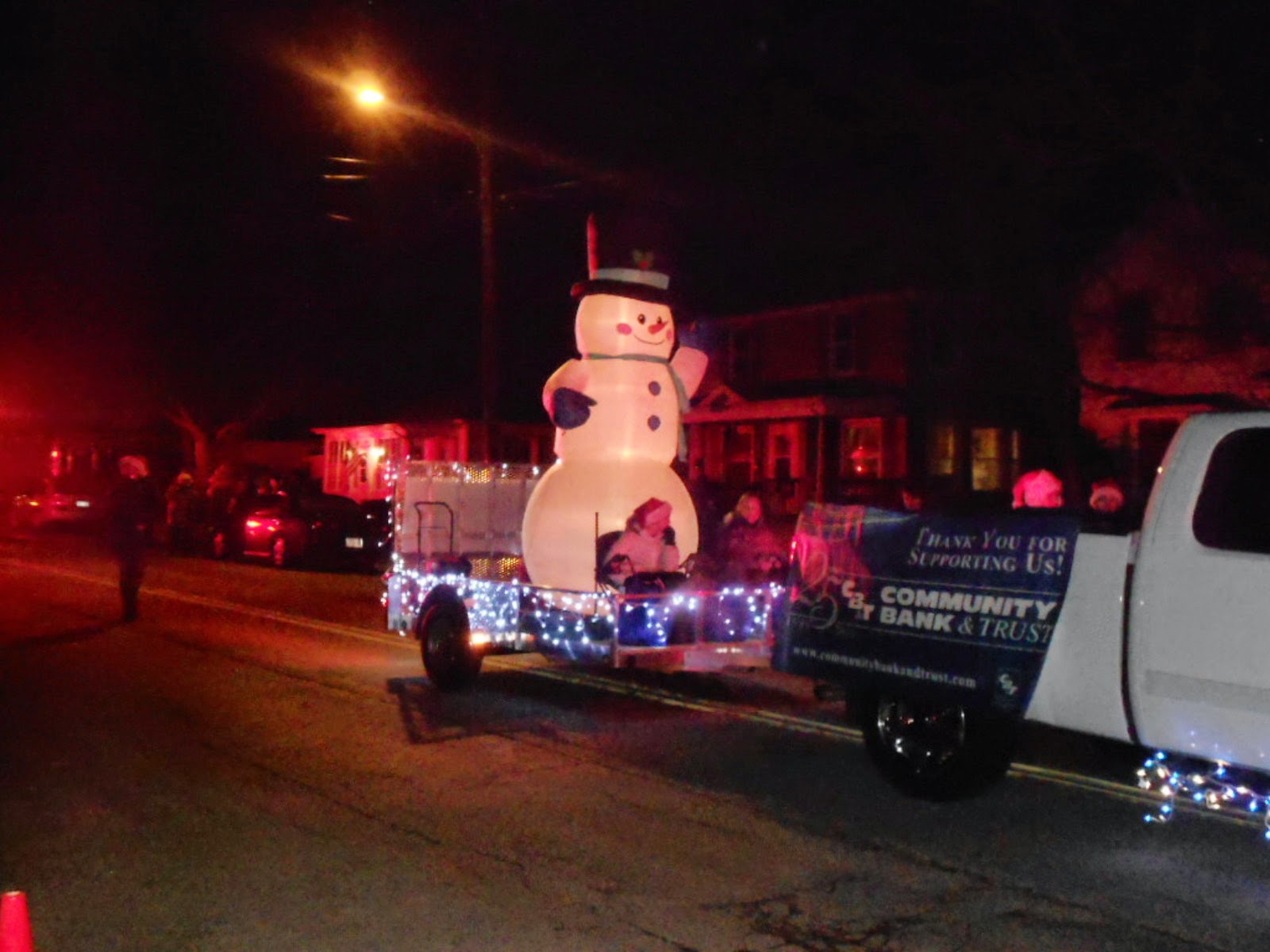 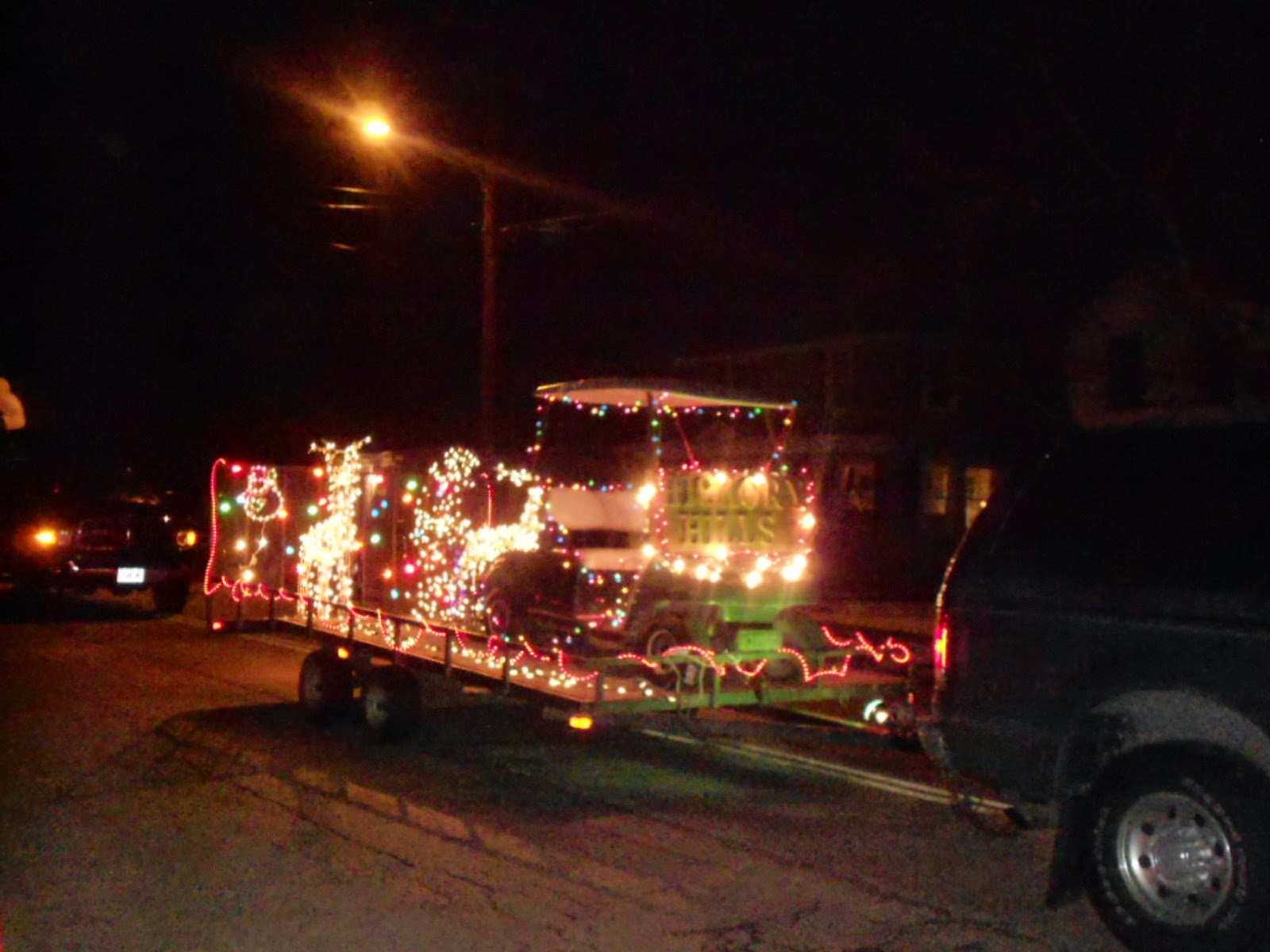 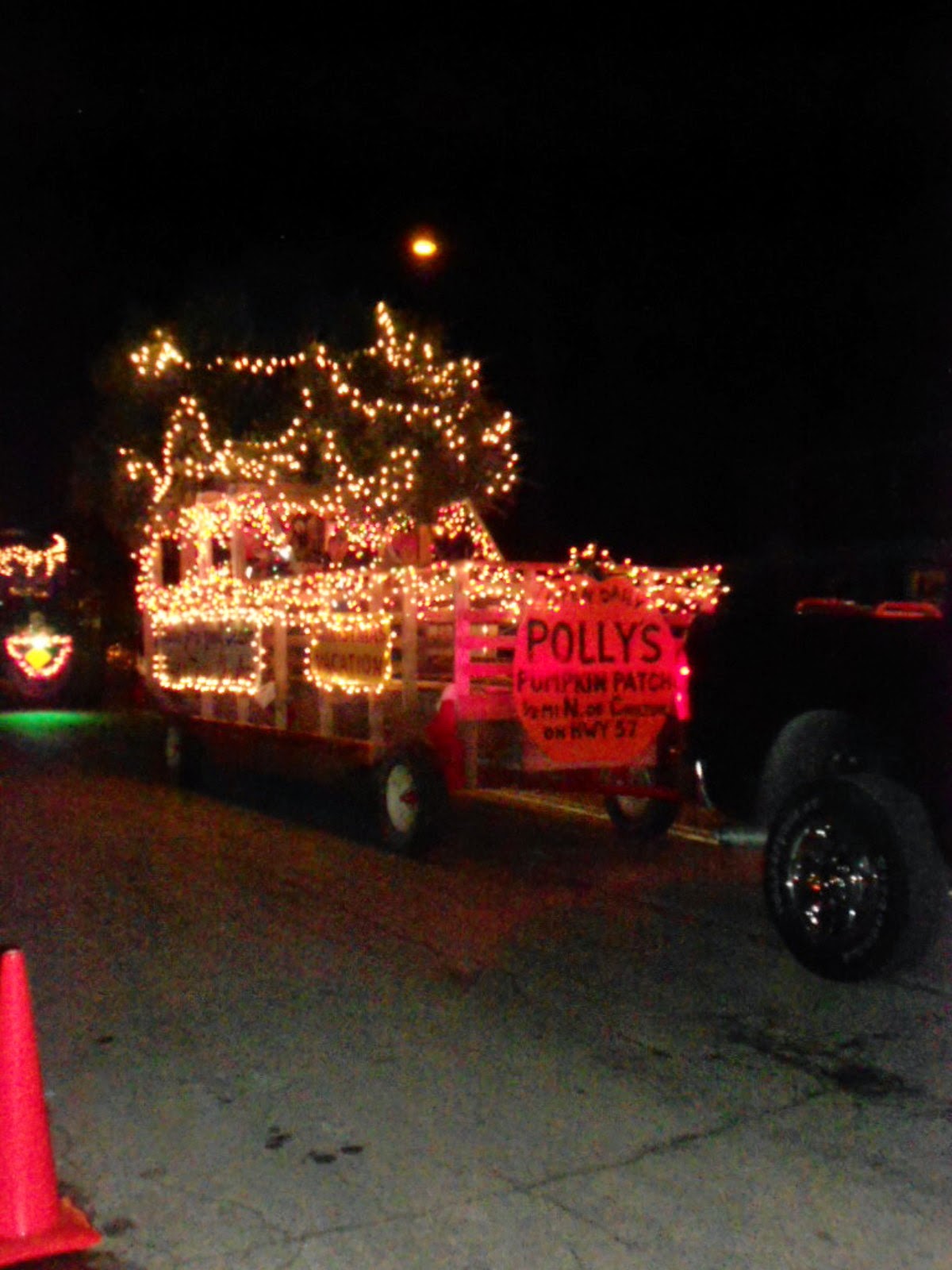 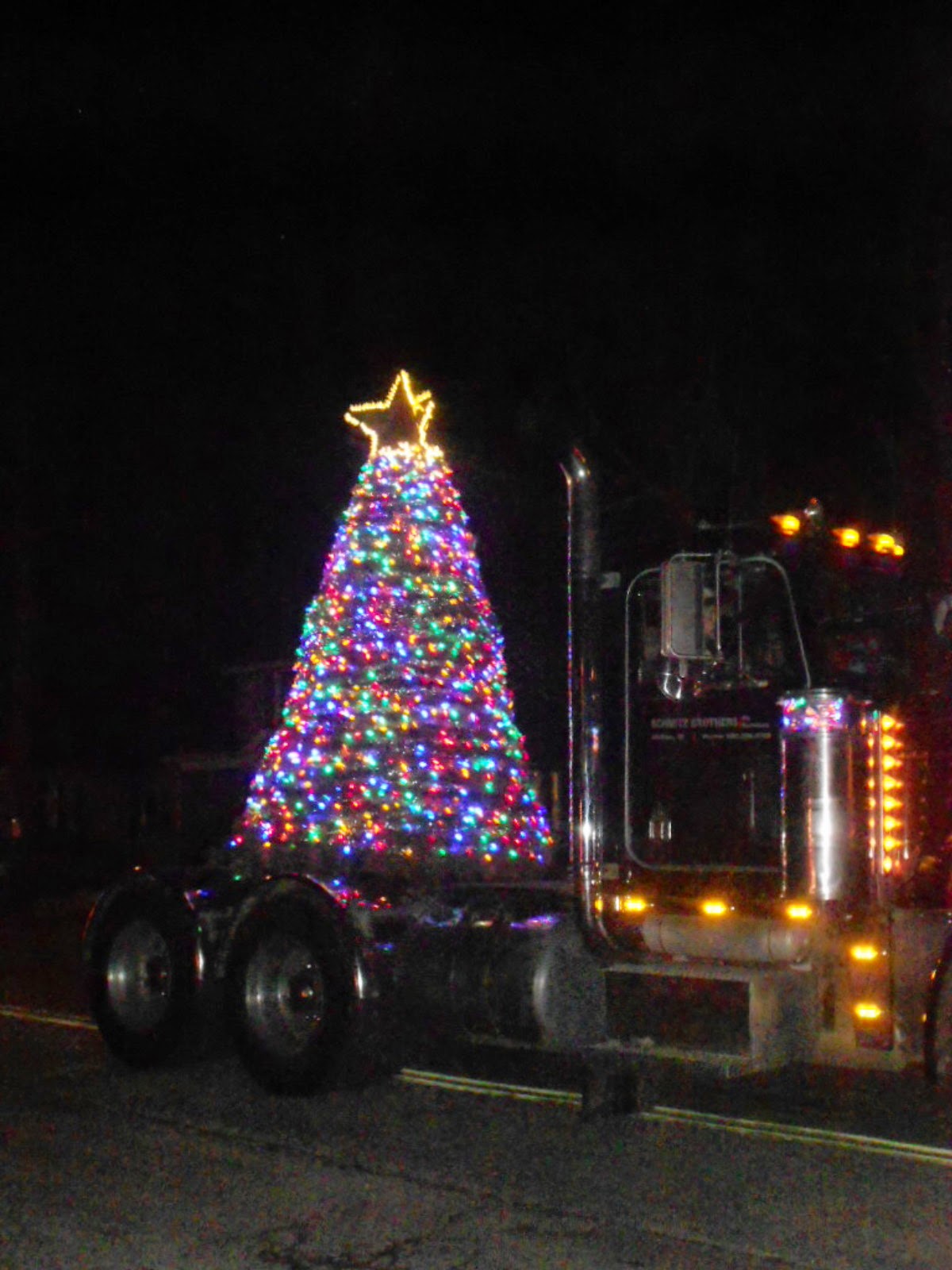 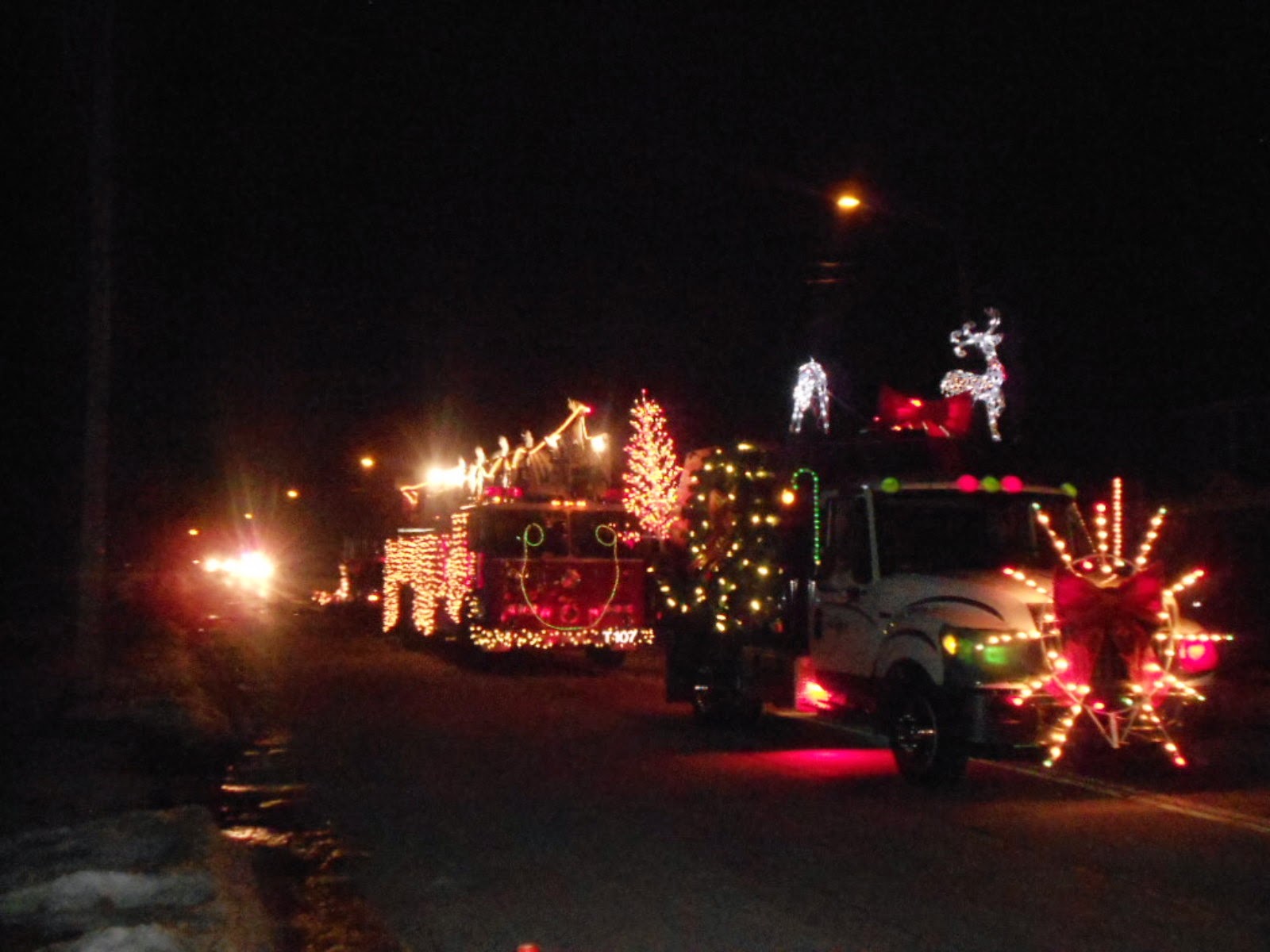 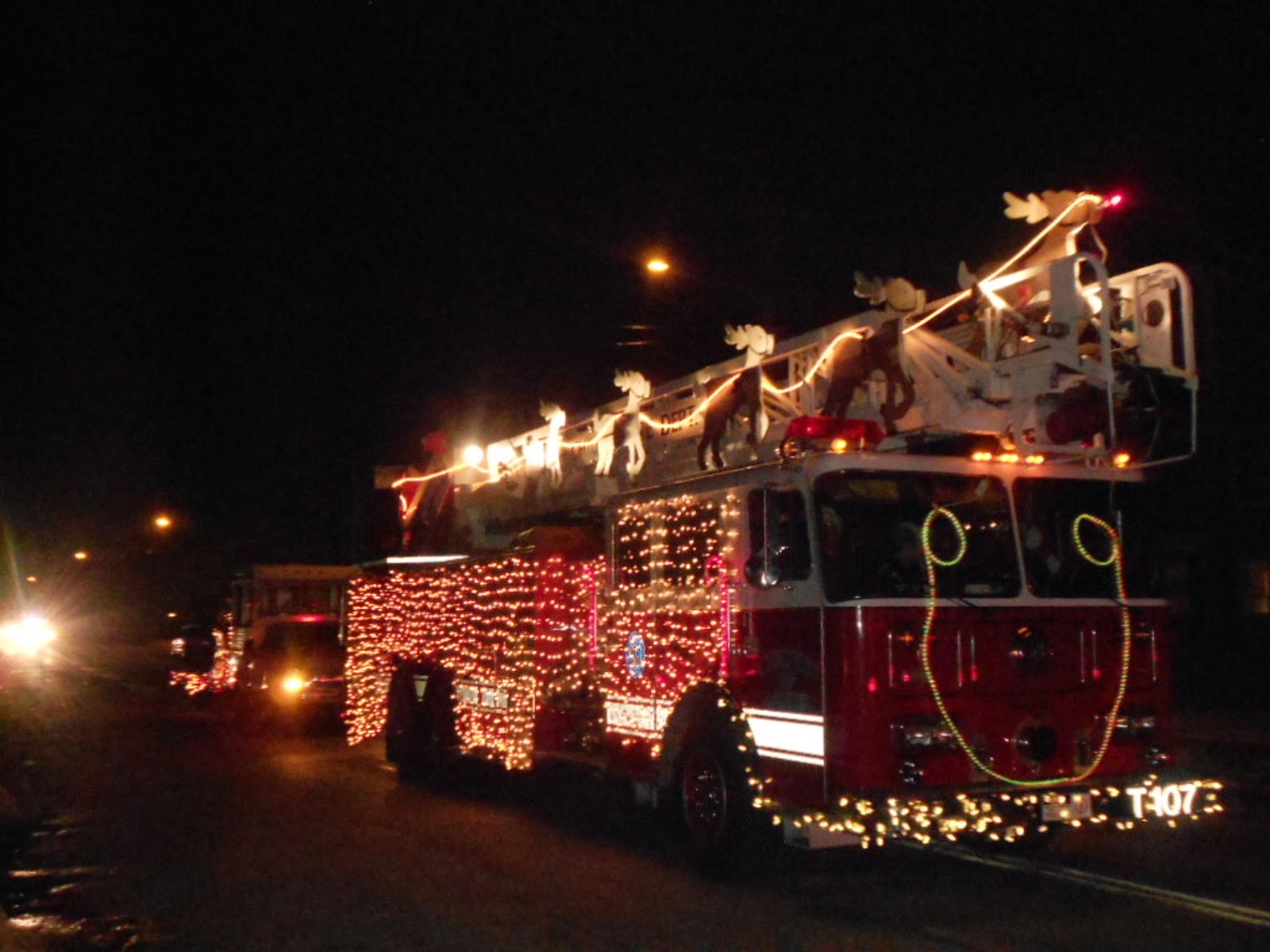 and most of all SANTA at the end of the parade! 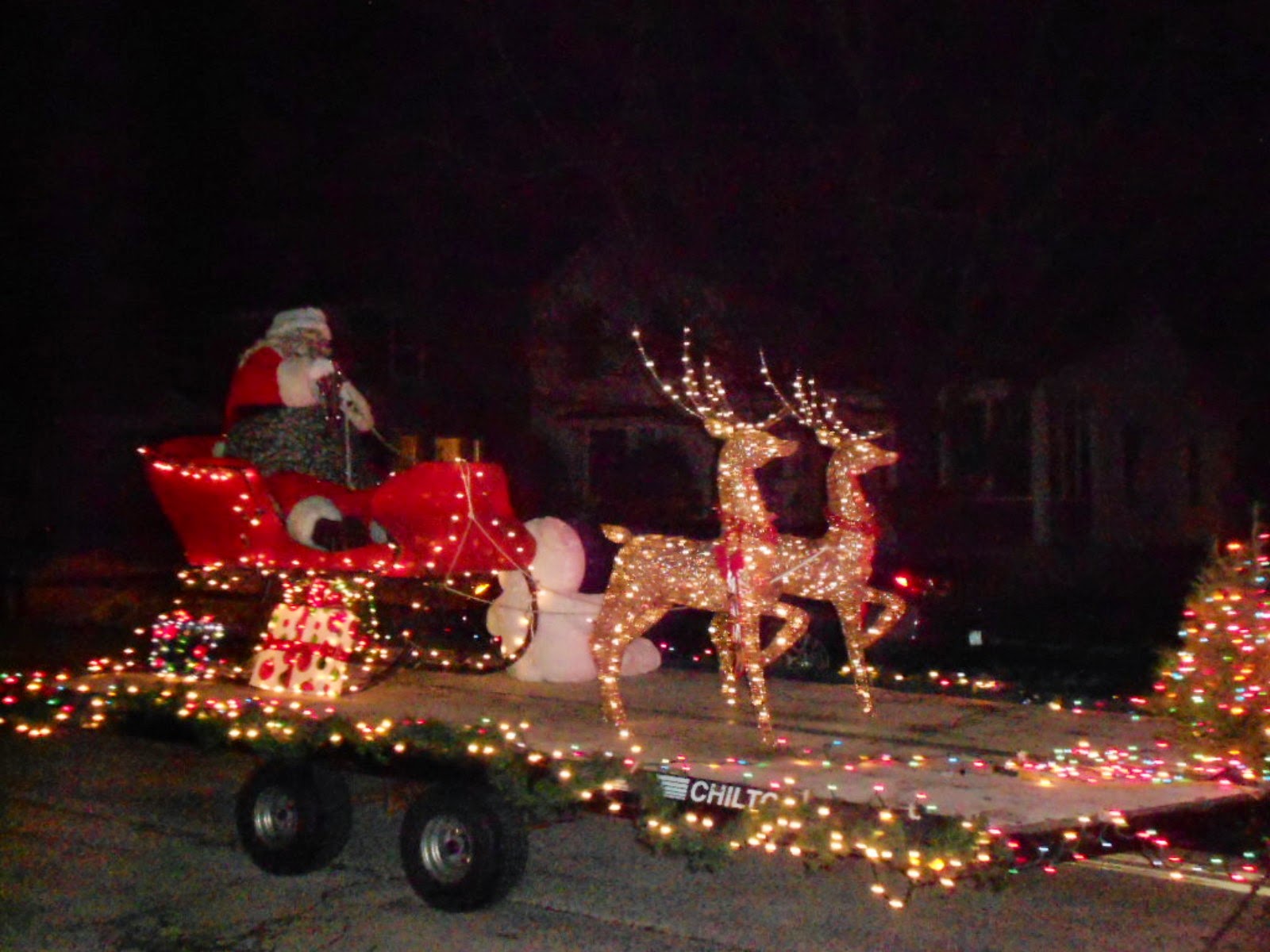 As we walked back home through the night, warmed by the love and joy from the event, we talked.  Talking about how much we enjoy this little town and all the spirit they show with three parades each year.  The Memorial Day parade passes right past our home.  The big Father's Day parade is quite large and we caught that down on the other corner.  And now this City of Lights Parade coming within 4 houses of our own home.  What luck!


The city workers had also come down our street this week to decorate the street lights.
This is the one right out in front by our own driveway...
complete with pine garland, wreath, lights and a big ribbon! 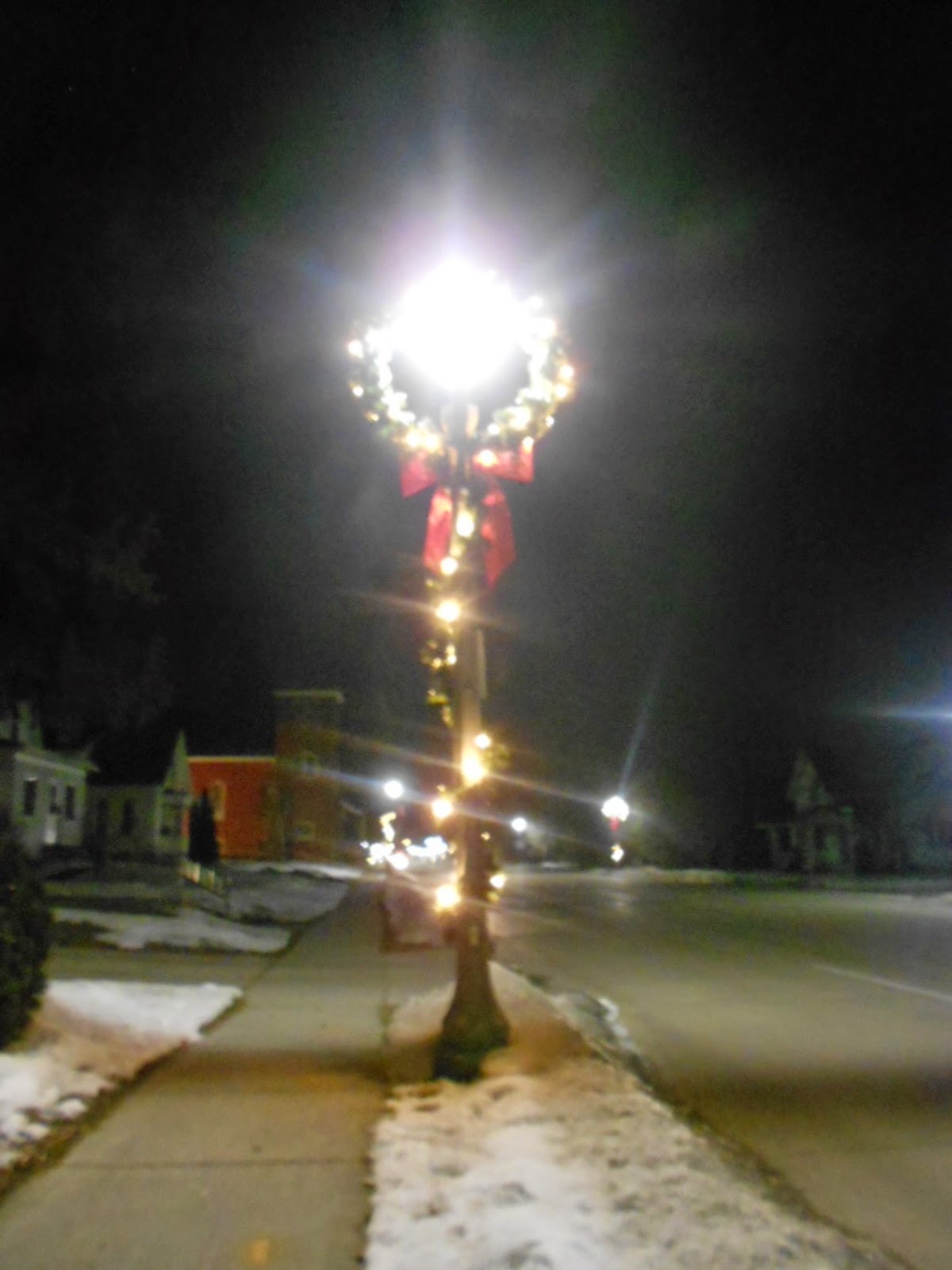 As we turned up our sidewalk,
our own decorations were shining brightly into the night. 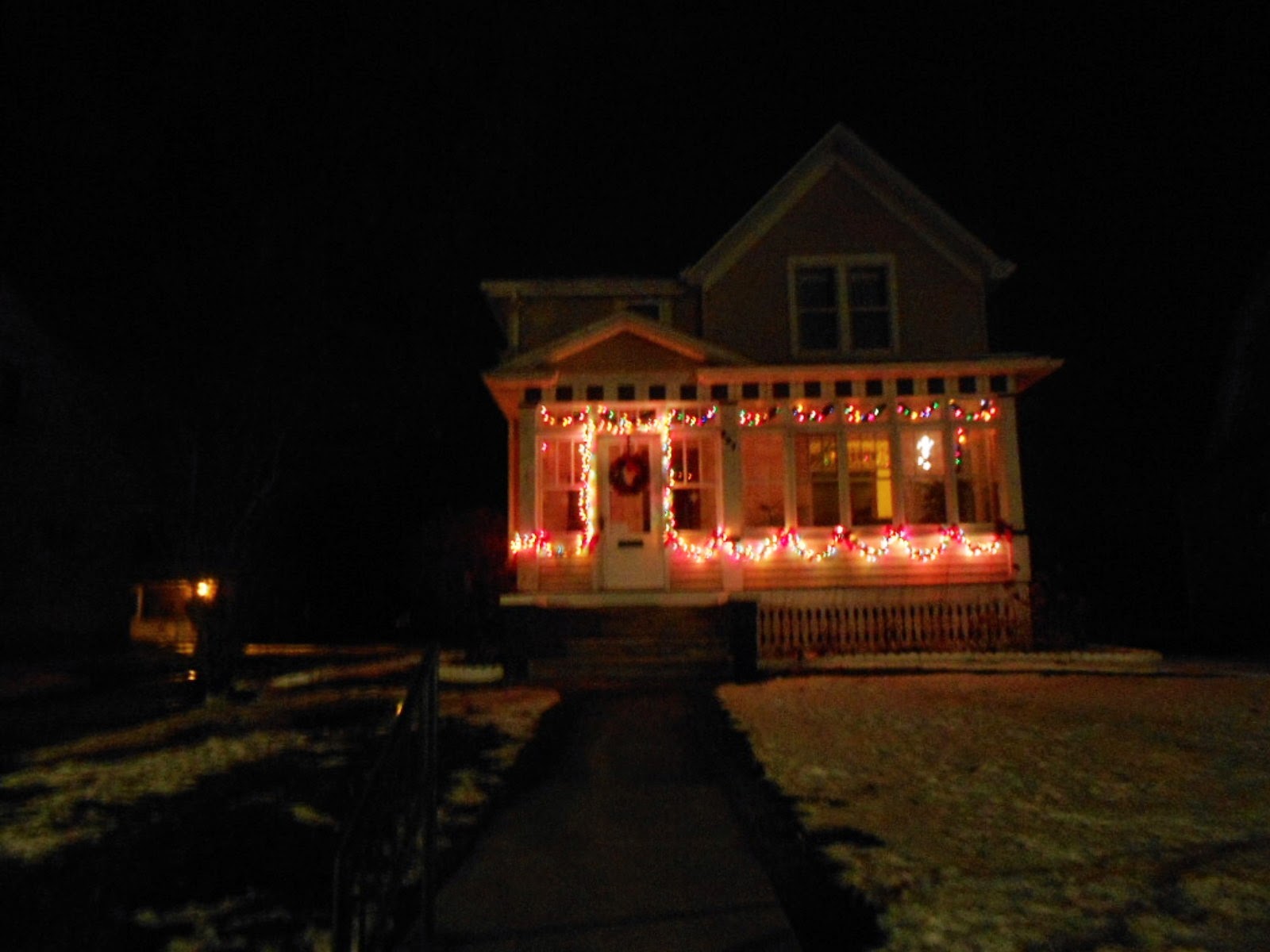 The same evening as our City of Lights Parade, our son Dan and wife Heather and kids Allegra and Mason attended an event at Lambeau Field in Green Bay. It was a holiday themed light festival going on there too. Turns out they got to meet Packers President and CEO Mark Murphy! 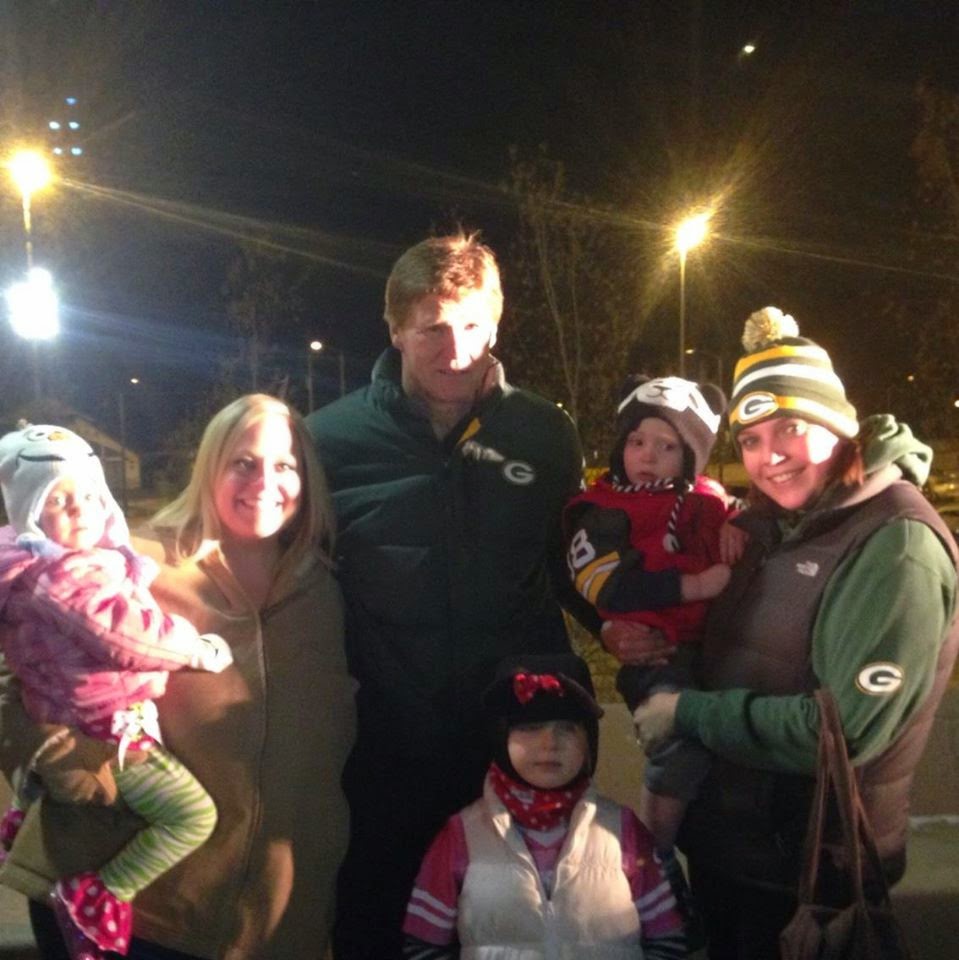 Pretty cool eh?
Around Green Bay, that is like meeting up with some Hollywood Movie Star!

Posted by KarenInTheWoods at 10:18 PM