We are starting the new year with some more wonderful snow falling today, the winds are going to pick up later with gusts in the 40 to 50 mph range. Right now it's coming gently straight down and looks very peaceful. We have some Sub-Zero temperatures coming up in the next few days as well. Winter is here. 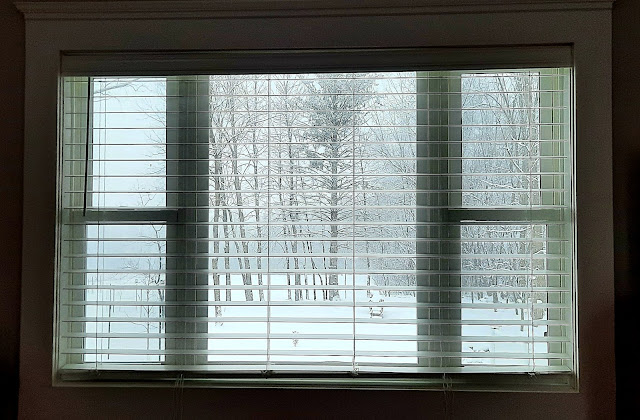 We are not going anywhere; remaining snug and cozy and warm in the house. So I thought I'd take the time to write about our New Year's weekend with our Family Christmas Celebration. It sure was busy --- go go go. Now I'm finally catching up and enjoying all of the memories dancing through my head.

It started on Friday night (New Years Eve) with babysitting some of the grandkids while our grown daughters and spouses went to a wedding in Green Bay. It was a wedding on the other side of the family and it was nice to be able to take the grandkids so the adults could enjoy themselves. The kids enjoyed making their own pizzas for supper and afterwards I took the two littlest girls over to the sewing machine. They were each going to sew a pillow and stuff it. What a perfect thing to have for a sleepover, a pillow made by themselves. They are only 5 and 6 years old and unable to reach the foot control and feed the fabric through the machine at the same time. I carefully do the actual sewing while they help feed the fabric and pull out the pins as each one gets close to the needle. They carefully watch all of the stitching on each of their pillows so they really feel like they had a part in making it.  They get to snip with the ends of the threads with my tiny scissors that is shaped liked a bird.

Once the pillows were sewn around on all three sides it was time to get out the stuffing to stuff them full. Grandpa had a little fun when he grabbed a hunk of the stuffing and started up some Ho Ho Ho mischief of his own.

Both girls were sure surprised and hopped on his lap and told him what they want for Christmas next year! And also pointed out what a silly Grandpa he was....

Bit by bit they each stuffed their pillows. It's much better to stuff them with little clumps than throw in one big hunk at a time.  They used up that entire bag of stuffing!

We carefully pinned them closed and top-stitched shut the open end. Here are the girls posing with their finished pillows. What a bunch of silly little things --- all full of giggles and laughter and joyous bursts of exuberance.

Jameson hung out and watched a movie with Grandpa while we gals were doing the sewing. Jameson is 13 and really isn't into sewing pillows. But he was enjoying the one-on-one time with Grandpa while I kept the girls out of his hair. Later he got all cozy and set up on the living room couch to sleep with little Binney. She likes all the attention she gets from him when it's calm and quiet.

As New Year's Eve wore on, surprisingly, Jameson was the first one to fall asleep! Those two giggly girls fell asleep at 9 but woke back up again. They were still giggling and wiggling around in the grandkid's new playroom at 11 p.m.! I finally had to put my foot down and tell them that was enough that they needed to go back asleep. None of us really made it till midnight. Such partiers, hey?
The next morning, the girls were so eager and ready to help do things for our upcoming Christmas celebration later on that day. We put away all the sleepover stuff and made the beds. The house was in ship shape.
Now for pumpkin pies!!!  They helped with the pie crust and crimped and pinched the edges around the pans and they helped measure out all the ingredients into the mixer for making pumpkin pie. They sure like measuring and counting and scooping in the right amounts.

In 45 minutes the house smelled great
with the aroma of
freshly baked pumpkin pies.

The girls were pretty proud of their accomplishment,
and ask me to take their pic with the pies!

Later on in the morning two more grandchildren joined us.  The plan was for each one to help make a different dish for our meal that evening. That way I could spread myself out throughout the day and give each one some special one-on-one time (and not wear me out in the process).
Here is Chelsea who is making her Great Grandma Muriel's fruit salad recipe. After draining the juice from two cans of pineapple and two cans of mandarin oranges into a pan, we stir in two small boxes or one large box of Jell-O "Cook" type vanilla pudding, not instant. No milk. The pudding mix and the juice thickens into a really wonderful sweet sauce.

Then Chelsea carefully poured the sauce over the pineapple chunks, mandarin orange pieces, sliced bananas, and maraschino cherries. We set it in the refrigerator to chill for a couple hours and thicken. Her dish contribution to the meal was now done.

Once he had them all into place and the packaging discarded, then he poured our secret ingredient over them. Sprite soda. Yes, Sprite soda. That was a secret I learned a couple years ago from our oldest daughter Erin. Then he patted dark brown sugar all over the tops of the hams. Every 15 to 20 minutes he would come back with the turkey baster and suck up the juice on the bottom and redistribute it over the top of the hams. Because they are spiral sliced, the flavoring soaked right into the meat. He also learned how to use a meat thermometer to tell when they were close to getting done, so we could turn the roaster down to warm.

Now it was Clayton's turn to work on a dish. He likes the green bean casserole. We used the long skinny frozen frozen green beans from Aldi and cans of cream of celery soup, which are lighter in flavor than the heavier cream of mushroom soup. He added the layers of the French's onions and some spices over the top.

Now it's ready for a layer of tinfoil and then it will go in the oven along with the pan of stuffing that his mom was bringing over in a little bit. It was his first time ripping off tin foil from a roll, and he did great!

Steve then peeled up a whole big bag of potatoes and cooked them up and made a pan full of mashed potatoes. The day before I did a crock pot full of my Calico beans. This way everybody brought something or helped to make something to go with the meal.
Each child got some one-on-one time with Grandma in the kitchen. The parents came at about 4 p.m. to enjoy our Christmas family celebration.

The kids helped set the table and light the candles. Everything looked festive and pretty in the dining room, perfect for our gathering.

Desserts were laid out on the buffet
as well as some trays of cookies
and we had Tom and Jerry drinks.

The kids all ate at the kitchen table, (a.k.a the kids table), while the grown-ups filled their plates and had a relaxing adult evening meal in the dining room.

Afterwards everybody helped clean up and we had a wonderful evening of family celebration, opening presents, and playing cards. A few of the kids fell asleep and spent the night. That's par for the course. So they had a chance to sleep over opposite the other ones were there the night before. Claire was lucky, she got to sleep over both nights!
One of the special gifts we had given the children was that each child got a card. Inside the card was a printed message:

to the WHOLE Family

this year will be our….

For an afternoon of all the bowling you want to do,

Beverages of Choice for the parents.

to have fun for the day

with Grandma and Grandpa Pfun !!!

Afterwards we can all go to watch the Packer Game at our house.

Boy oh boy, were those kids ever excited! What a way to wind up the busy Holiday Vacation, by spending the final day of Christmas vacation together with Grandma and Grandpa. At 1 p.m. on Sunday we all gathered at the bowling alley.

We ordered up pizzas and pitchers of lemonade, the adults had a few other beverages and the kids had appetizers, while we were waiting for the pizzas to cook. We started bowling and sure had a lot of fun.

Littlest Claire, the bowling diva in her little bowling headband sewn by her sister Chelsea on her own sewing machine, decided to roll up her sleeves and her leggings to add a new stylish flare to her bowling costume.

We were given lanes 1 and 2 down on the end and our own area with some tables that we could put our pizzas on and the kids could eat in between bowling frames.

I haven't bowled in about 20 years, but it sure was fun. We didn't get high scores but we sure got a lot of laughs. I think we bowled four sets of games throughout the afternoon. Here is a compilation video clip of all of the fun we were having. It even includes me getting a strike!
Here's a picture of our little group at the bowling alley. I think this is the first annual family epic bowling day, I think we will repeat doing this every year. It sure was a lot of fun. 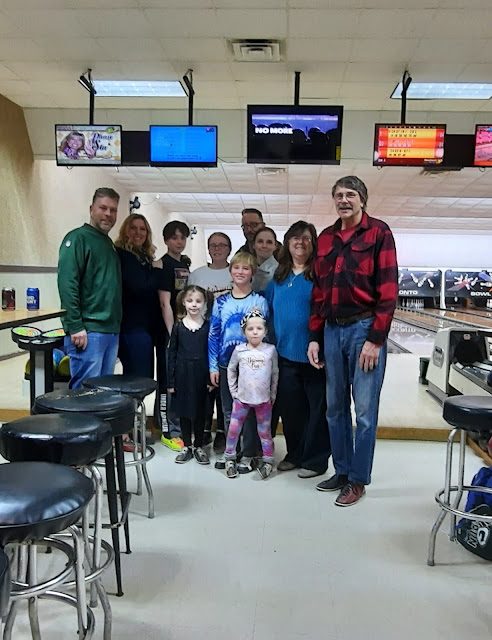 I think everyone had a good time. We were pretty tired by the time we were done and headed on home.  From there we watched the Packer game, which they won, and we flopped into bed, totally worn out.

Posted by KarenInTheWoods at 11:49 AM