Playing in the Playroom

We are still waiting for the door knobs to arrive. I am working on a stained glass idea for the transom.  Then we can finish up the French doors.

In the meantime, Steve decided to move on to the next project on his list. He has this list of things in his head that he wants to get done. I don't add to the list, I don't ever make a "honey do" list. He's driven by his own crazy ideas of what he wants to do.

This little room, which is only 10 ft by 6 ft, was used as an office. Well, now that we moved the office into the guest room with the new french doors, Steve wanted to work on the walls of this little room before we make it into the grandkids Play Room.  He grabbed his tape and now he could start Measuring Up.

There isn't much room, but there will be toys on a bookshelf on one wall, my steamer trunk under the window, and the double bed snugged up tight to the walls on three sides like a day bed with throw pillows. It will be great for sleepovers, and we can store things in the room later when they all grow up.

Again it was chop chop chop, crack the whip, and get everything pulled out of there and stacked up into the dining room.  Ugh... I just got it cleared out from the last big move while we were doing the office changeover.

Our original plans were to cover the room with eight pieces of 4 x 8 sheets of beadboard paneling that we bought earlier this summer. Another one of his bargain Facebook Marketplace finds.

Once he started measuring up and checking the squareness of the corners and the walls, he came to a grim conclusion. Remember, old houses walls are never straight and things are never "square". He concluded that the walls were too crooked to put the straight vertical lines of beadboard on in that room. From top to bottom they were off as much as almost an inch. That would add really crazy beadboard lines to the corners where the panels would intersect. So that plan was out.
On to plan B ---
Do you see how rough this plaster is?
Especially up around the doorframe?

I had to take this photo on wide-angle view which kind of distorted a little.
So we need to do something, and the plaster is very rough in that area.  Also on that wall, there is an electrical wall sconce. You can only turn it on and off by twisting the little knurled nut underneath the bottom of the sconce. I would like a switch on the wall by the doorway. So he said that was a good idea and he's going to take care of that at the same time.
It would be impossible to put a light fixture up into the ceiling at this time, because we had this whole section of the house blown with insulation. The roof line slopes so close there that it would mean crawling on hands and feet with about one foot of clearance to even get up there to wire in a light fixture. So I'm happy enough to just to have a wall switch instead of reaching up for the sconce light fixture. He said that's easy!  What a guy.
The room is really cute, even though it's small. Here's the six-foot wall that's facing the front of the house and the front porch. We put the new window in last December, so really the only thing left in this room to do are the walls and some new crown moulding. The floors had all been refinished beautifully right before we bought the house.

P.S. when we ordered the door knobs for the new french doors, we also ordered a set for this door too.
Steve started tearing off the top crown moulding trim. He really had to pry and pry and pry with his big pry bar. Want to know why? Well, just look at this! They used 3 inch sinker nails for rough construction to hold this trim up into place! Isn't that crazy? But I suppose, in the old days you used whatever nails you had around in your tool box or in your work shop when you were doing things.

Steve poked around on the different surfaces of the wall in that room. Some of the plaster on one wall was kind of loose so he decided to rip it down. I didn't even have a chance to get the floor covered with rosin paper. He started to make a mess!  Watch out.. it's Steveio Demo Day!

Look at this naughty boy! He had all of the crown moulding ripped off where it met the ceiling. He also ripped some crazy quarteround trim off all of the corners. Pretty soon he started ripping any loose plaster off the wall. I think he looks happy?

This is what he discovered underneath. Three layers of wallpaper! So someone plastered over the wallpaper with this texture splatter gun? It was just a thin layer and in some spots it had pulled away.

Kind of neat to look at the old wallpapers. First there was the brown stuff with the tiny white stripes, then on top of that was the blue floral with pink flowers, and then the one on top of that was a mint green. Very interesting. But also very messy!

I tried to keep one section of the vintage paper but most of it came off in little pieces. The layers of old wheat paste were discolored and disintegrating.  Why on earth someone would plaster over wallpaper with a texture splatter gun is beyond me.

He only ripped free the loose stuff and got it back down to the base panel or wallboard or whatever it was mounted to. Behind that there was old plaster and lath strips that had cracked and crumbled away. That's why it had been covered up with some kind of wall board.

That one wall was the worst wall around the doorway. The rest of the walls were still in pretty good shape. So he didn't have to rip it any further.  Now he went around securing any loose spots with more drywall screws, making contact to the studs and lathes underneath.  Soon nothing was loose or flexing.

Well, he decided we are NOT going to mess with the beadboard paneling at all. Instead we are going to sheetrock the entire thing with new 3/8 inch thick drywall. He called up Paul, the young man we just had do the plaster in our bedroom, and prior to that he did our whole She Shed. Paul said that was just finishing up another job tonight and will be available in the morning!

So guess where Steve is right now? He is off at Menards picking up all of the supplies needed to get everything ready. I guess tomorrow morning bright and early we are going to be redoing this cute little room.  Also, Steve was able to wire in the new light switch like I asked.

Then.....  He said let's get a matching wall sconce, the same as what we used down in the She Shed.  I have one more special leaded glass shade for a wall sconce, and they only fit a certain type of light fixture housing.

I called up the local True Value in Oconto Falls, to ask if they had any more of these particular wall sconces. I wanted the exact same one so my stained glass shade would fit. Well, dangnabbit, it turns out that they've been discontinued! 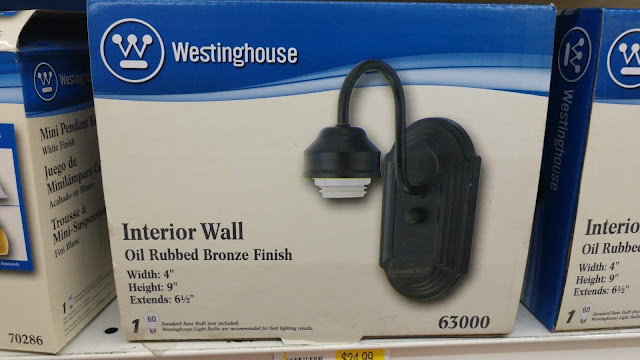 Come to think of it, when I bought these first three fixtures (actually two years ago), they were the last three boxes left on the shelf. They had been marked down on clearance. One was white, one was brass, and one was rubbed oil rubbed bronze. When I bought them I painted all three white so they would match for the she shed. 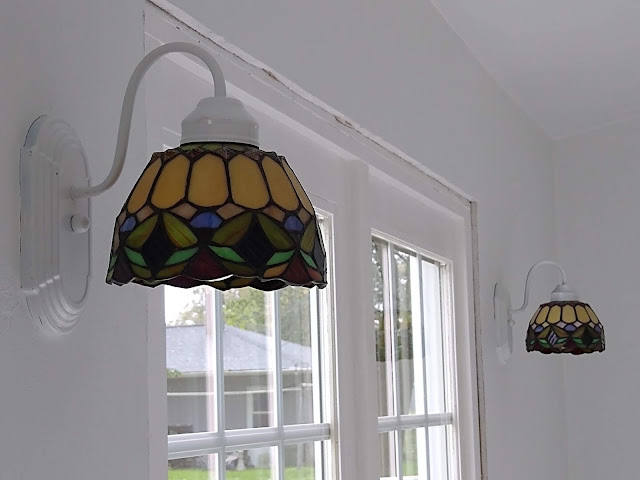 I was disappointed, but then the gentleman called me back 10 minutes later and told me they have one left without a box that had been a display model! Yay! He set it aside with our name on it and we will pick that up in the morning!!

He didn't even tell me what finish was on the one that we want to buy that he is holding for me. I don't care, because I will paint it anyhow. At least we have the same one that I know my leaded glass shade will fit just like these others. They are an unusual size and these light fixtures happen to have a big ceramic ring inside that screws around the bulb socket that holds these unusual sized lamp shades. There isn't any lip edge on the stained glass shades to hold into more traditional style light fixtures.
So tomorrow, while the guys are busy working in the Play Room with the plastering, I will be running to the hardware store in Oconto Falls to get the light fixture. Thanks United True Value! You just got to love small towns and personal service.
I am gonna relax in the tub tonight while I have a bit of peace and quiet. Steve is gone getting our supplies and I think I need a little break.  ahhhhhh a glass of wine, soft music, maybe some soduko puzzles.  Relaxxxxxxx

Posted by KarenInTheWoods at 7:20 PM