Ewwwwwee the temperature sure jumped up here in Wisconsin on Tuesday. And along with that, the humidity!

This was from earlier in the afternoon, the weatherman later said our record breaking high was 94 degrees and the "feels like" temperature was well over a hundred with the heat index.  The humidity was in the 70% range. ICK!

Just three days ago we were covering up all of our plants and vegetables because we had frost overnight. Only in Wisconsin...

We started a few projects early in the morning to get them done before the heat got any worse. Steve had reconstructed the new sills on the basement windows on the south side of the house.  Once he had the new material in place, I gave them each a couple of coats of good exterior paint. Boy oh boy, that sure looks a lot better than how they used to look. 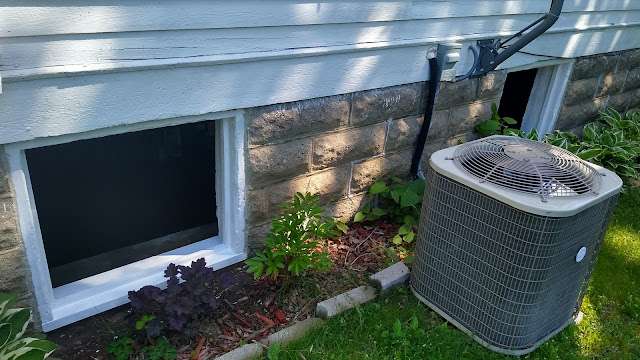 Towards evening when things cooled down a little bit more, Steve was able to mount the two newly painted windows into place.  Then from the inside, we will add the second layer of windows for added heat loss prevention in the winter. 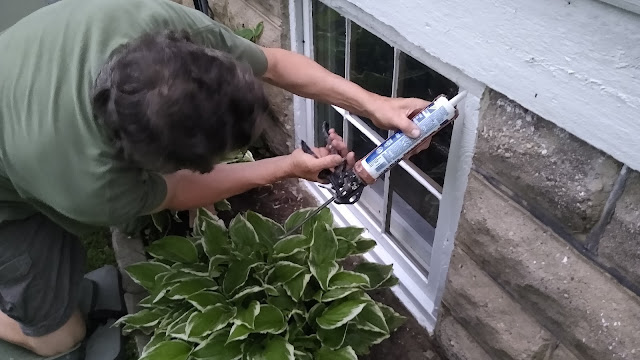 We were losing daylight fast,
but he wanted to get them into place
so no critters would wander into our basement! 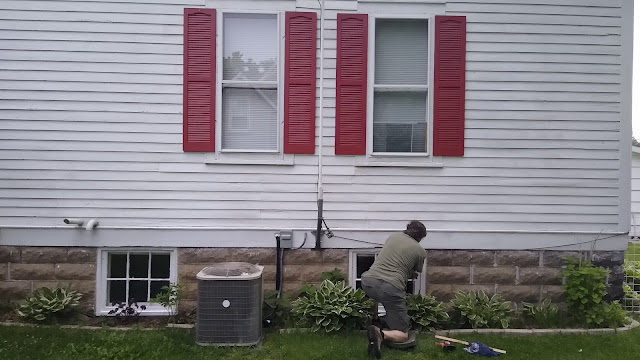 It sure looks a lot better than what was there before. I took this next pic today.  Now all eight basement windows are finished!   They will match the multi paned windows we want to install later on the main floor of the house. 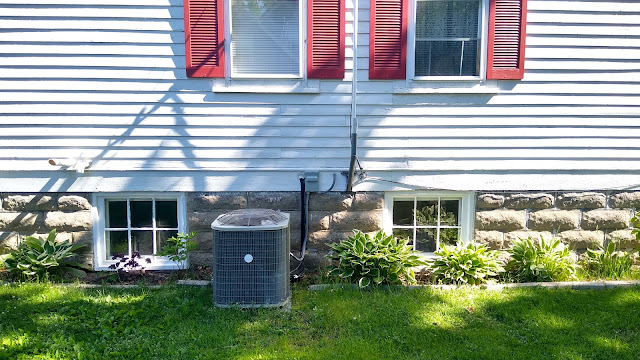 We have also installed some room darkening roller shades in the west facing windows of the she shed, as well as in the dining room and office. This keeps that hot blazing afternoon sun from heating up the interior of the house and combating against the central air conditioning. 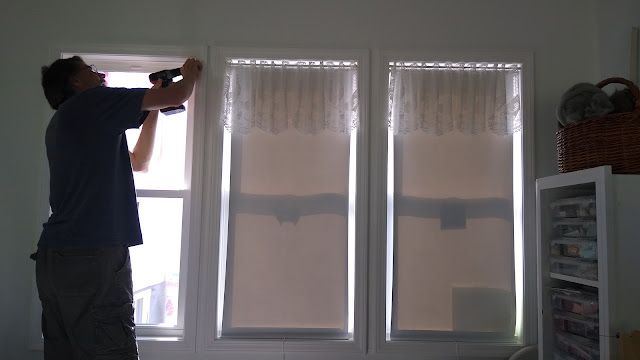 As soon as the shades were up and in place
the rooms cooled down considerably. 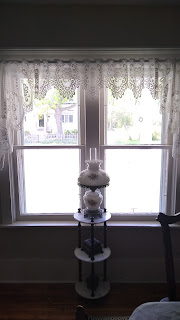 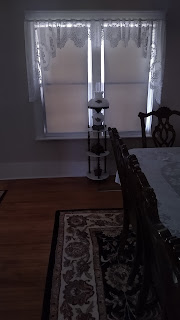 I even found these adorable little crocheted shade pulls rings, that look so old-fashioned and cute. Perfect for a little Grandma and Grandpa farmhouse! 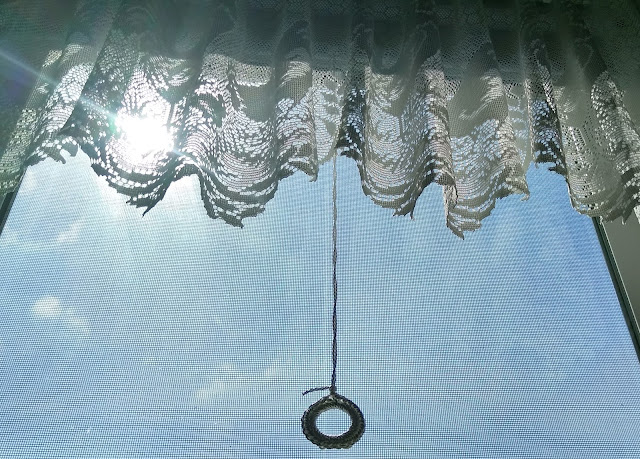 Now on to Steve's newest acquisition----
for his "Retirement Entertainment":

He bought A THIRD PUMP! This time it's a gas powered one. First he bought an extra supplemental used household type sump pump. Second he bought an electrical pump from Harbor Freight and a couple more hoses. Now he has increased to a large gas-powered pump along with even larger hoses!!!

My Boy with his water toys is sure having fun! 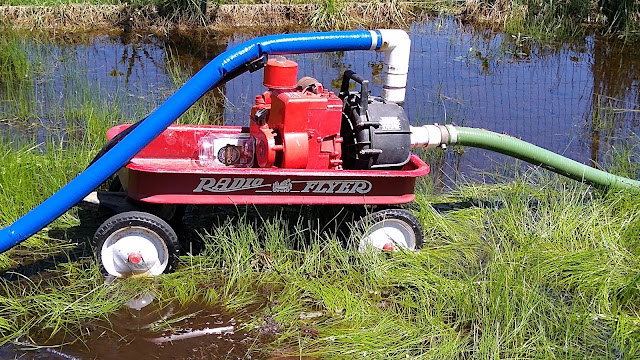 He found it used on Marketplace and
had to rebuild the carburetor and clean out
the old gas....  and now it runs! 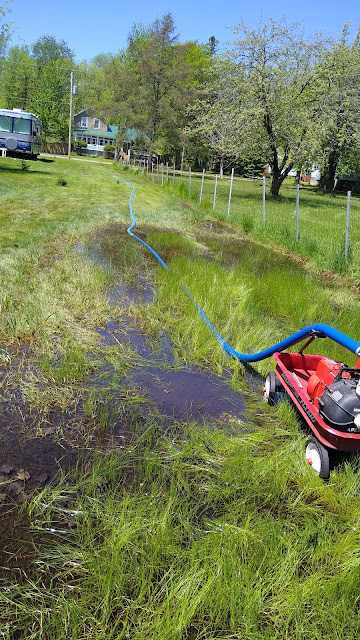 There's really no need to pump out the big puddles in the yard, except for him to have fun. Big Boy playing with mud puddles, you know! 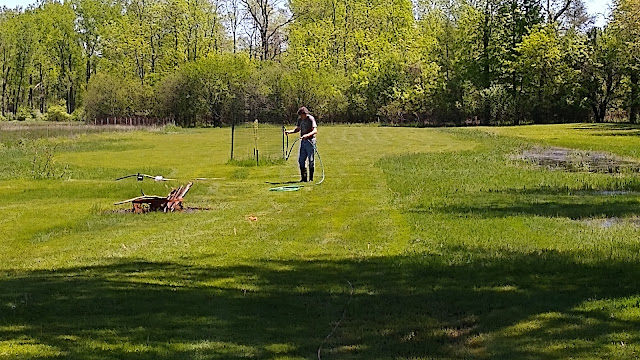 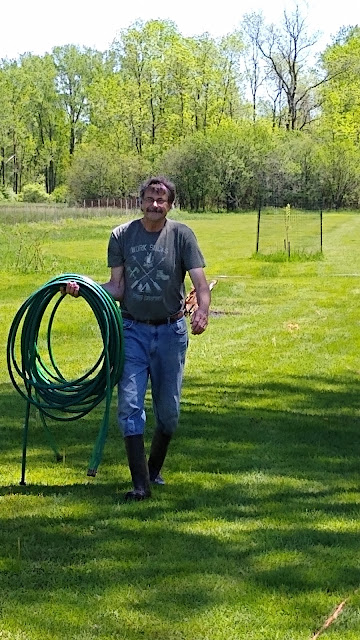 Some friends suggested just making a big pond back there, year round.  I wouldn't mind one, but he said no. He said all they do is attract mosquitoes and then he has to maintain it. He wants all the puddled up water drained so he can cut grass there!!! (like he doesn't have enough grass already with two and a half acres?)

If we just let it naturally fill up a hole, it would be just our luck that cat tails and marsh grass would grow.  Then the DNR would designate us as a watershed property and we could never cut the grass for 50 ft around it!!

The situation is that there has already been 20 to 30 loads of fill brought back there by the previous owners in the last few years. We are just so low to the newly heightened water table of the Great Lakes being so high... that it never has a chance to soak down in the ground anymore. When you walk in our grass everything is mushy and soft and never has a chance to dry out. Until the Great Lakes level were to go back down where it was 10 years ago or 30 years ago or 50 years ago, the yard is probably never going to dry out. But he's having fun playing with his puddles. I don't care one way or another if the puddles are back there. But he wants to drain them so let him play. At least now he can start using gasoline instead of electricity.

We're supposed to get a bunch more rain before the weekend so he can play with them again!!

As far as our self imposed quarantine, we have allowed ourselves a little bit of leeway. We have done a few shopping trips to the stores in the early morning senior hours on a weekday. We picked up what we needed and got the heck out as fast as we could.

This has been very tough on us being apart from our grandchildren. So we started letting up and are starting to visit with our grandkids and our grown children this week.  One family at a time.  Touching my grandkids again and hugging and playing. We need that....

We have decided that we are going to visit with family members that are not sick, and that have not been around any sick people. For now. Until we see how things go.


I feel like we are waking up after being asleep for a long time...

Posted by KarenInTheWoods at 11:09 AM