A Bit of Slow Mo for the Snow

Here in northeastern Wisconsin, we got probably close to a foot of snow overnight.

When I went to the local daycare today to pick up our grandson Clayton, the daycare worker had all of the older children out playing on this huge mountain of snow by the parkinglot. First I took a couple pictures. 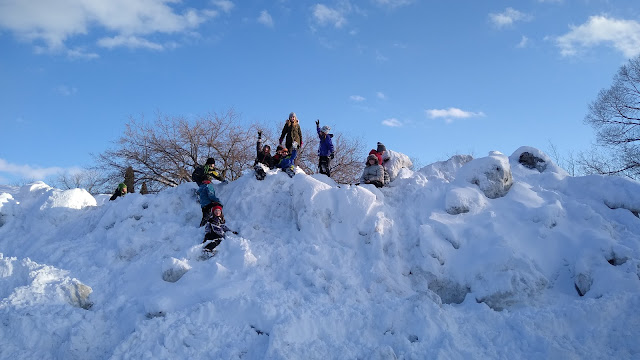 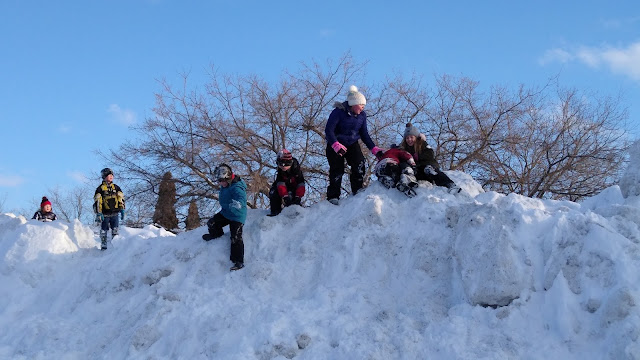 Then I remembered that my video camera app on my Motorola phone recently updated... And now it has a slow motion feature!

So we lined up all the kids at the top of the mountain and told them to jump off!


The resulting video is hilarious:

We actually filmed it twice
because it was so much fun!!

and here is one more time at regular speed

I had to play it over and over for the kids
as they came off the hill,
watching on my tiny screen on my cell phone.

I promised I would put all three on You Tube
so they could get their parents to watch it this evening.

Anyhow, as I was saying, we got a lot of snow overnight---- 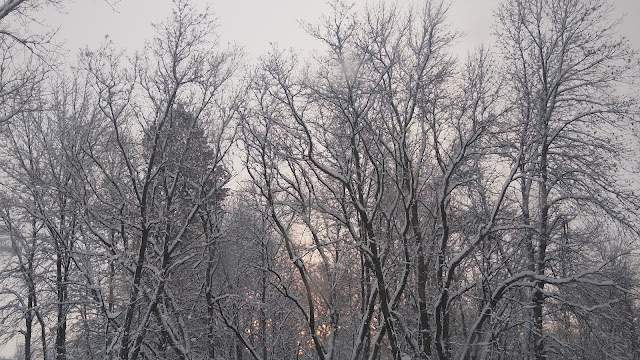 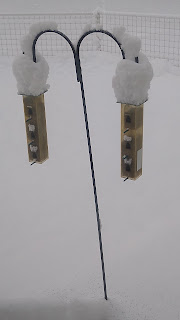 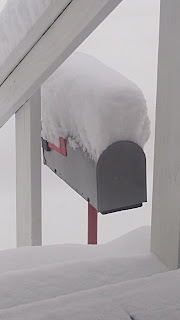 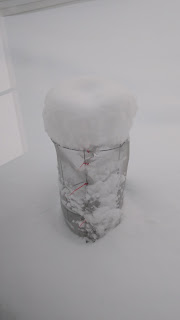 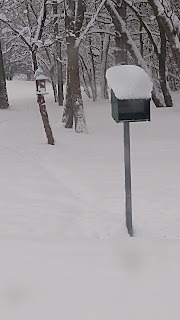 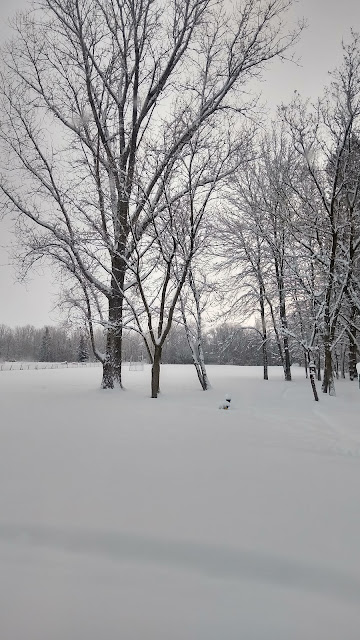 Even with all of this snow on the little tv antenna
we were able to still get in our local stations.
Notice even the icicles on the far left.... hahahaa 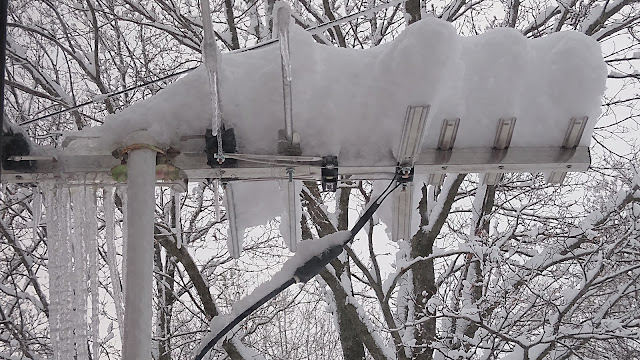 The snow was stuck tight to all of the tree branches and shrubs.
No wind to knock any of it off....
It was like a fairyland out there. 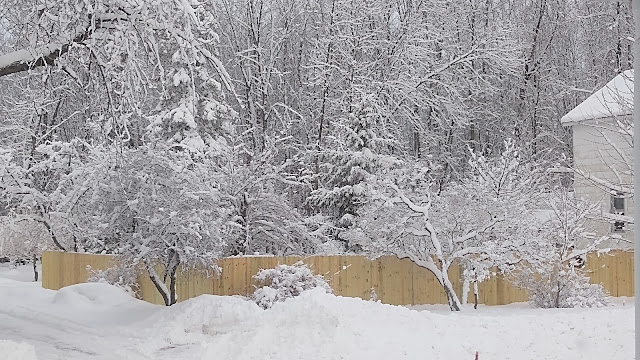 The morning was not quiet, instead it was busy busy busy with the noise of snow blowers running around the neighborhood and people with snow shovels hard at work.

School was delayed 2 hours so the rural roads could get fixed up before the school buses had to get through.

Now, in our small town, if you are a student and and live two miles or less from the school, you don't get the benefit of riding a bus. You have to either walk or find transportation or if you're lucky enough to be a high schooler, you can drive yourself.

The two neighbor girls had to get their driveway shoveled out to get to school, because it was two hours later today. Their father had left early for work and his car was the one in the driveway parked closest to the street.

We noticed the girls brushing off their vehicles which had been parked deeper into the driveway, and trying to get ready to leave to get to school. They were frantically shoveling as fast as they could, trying to get a clear shot for their vehicles to reach the street.  (*I think they slept in the extra 2 hours instead of shoveling snow*)

Both Steve and the neighbor on the other side saw their dilemma. They each brought over their snow blowers and helped the young ladies get their vehicles free and out onto the street. Off to school they went! 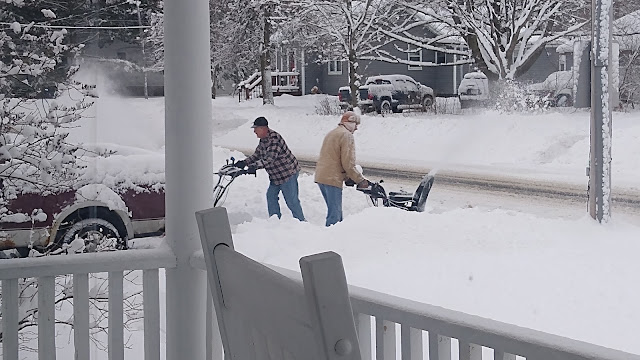 Back to this evening-----  sorry, I jumped around.

As I said, it was grandson Clayton's turn to come over after I picked him off the big snowy mountain at daycare.

He came to spend the evening and help us out with cooking supper. He asked if we could make his favorite type of tater tot casserole, but he would like to make a few changes.  He asked if we could put green beans in it. And use the cream of mushroom soup.  He said that's the way they do it at the daycare! So look who's teaching me how to make his favorite casserole....

How cute. Here he is learning how to divide the meat up into thirds. (Yes he washed his hands first, and also afterwards).  We used one third for each pan, and the last third was frozen for a different meal. 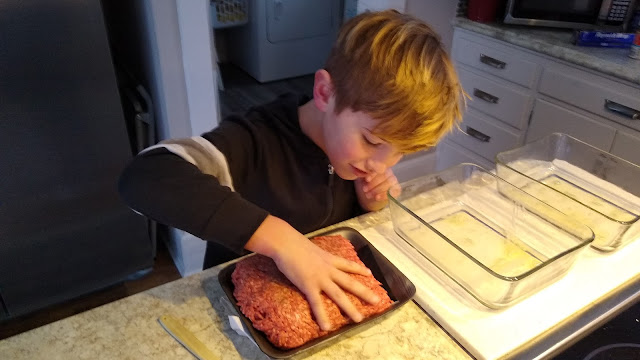 We decided to make 2 pans. One his way for our dinner that evening. The other one would be made with our normal cream of celery soup, and get frozen or a future meal for Steve and I at some later date. 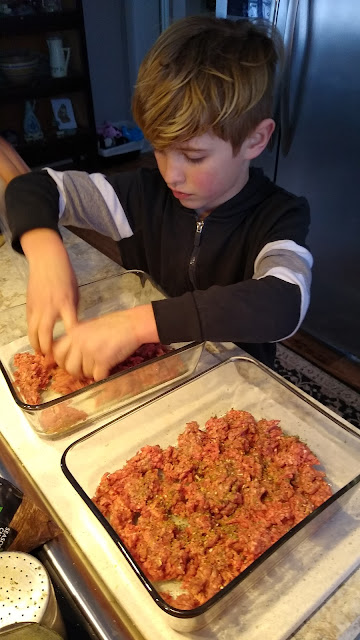 Then he broke the frozen green beans into little pieces. Those he spread around on top of the meat and seasonings. Finnegan was carefully watching in the background in case anything fell on the floor. 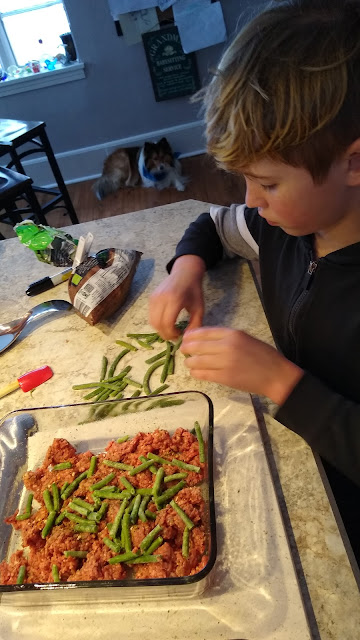 Now he slathered on the cream of mushroom soup over his casserole... And the cream of celery on ours to be frozen later. 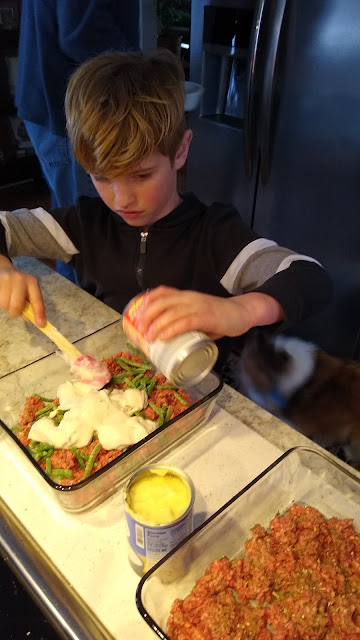 The last step was to carefully line up all of the little tater tots in rows.  He enjoyed doing this and the oven was preheating while he was working on this step.   We had both the tater tots and the tater coins, so he layered them in patterns. 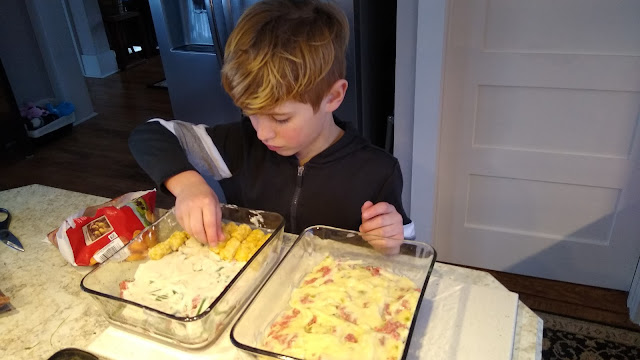 We covered the pans with tin foil and put them in the oven at 400° for about half an hour. Just look at this little guy, waiting to see his finished supper. I think he was hungry after playing so hard on that Snow Mountain! 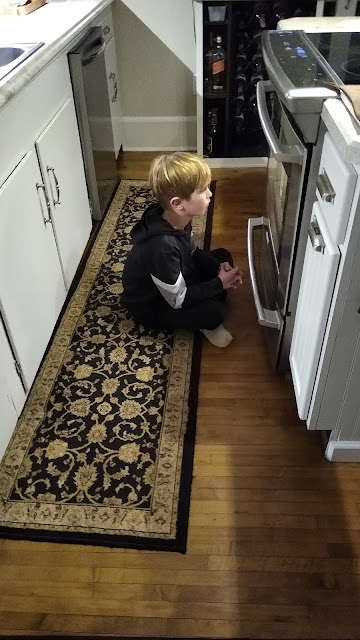 While the supper was baking, I convinced him that it would take a while... so I got him back down to the she shed to work on some fun stuff.  Soon he was helping me crank a sock on my sock knitting machine. 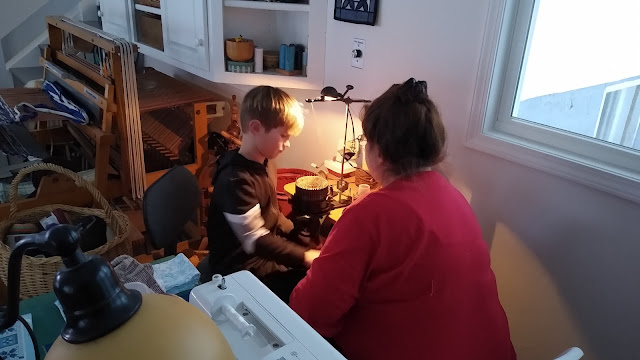 The timer went off and we checked on our casseroles.  It was time to take off the tin foil and let them "brown" a bit for about 10 more minutes.  He was REALLY hungry by now, he said.

Next job was to set the table, 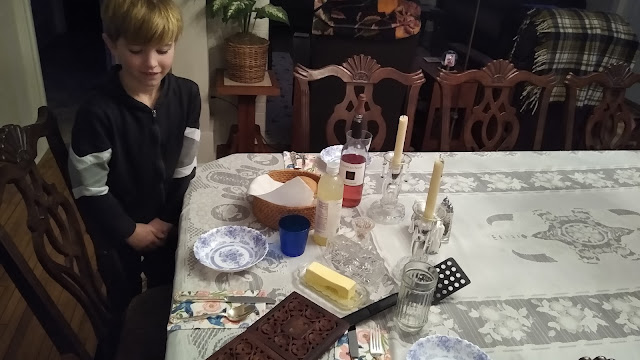 and he carefully lit the candles
under supervision. 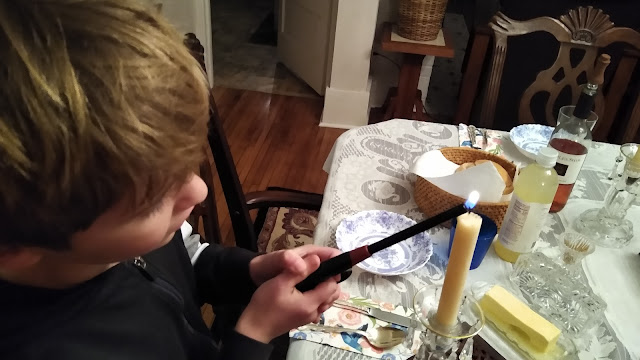 The timer went off again, and now dinner was ready to come out of the oven. He was pretty proud of his success. 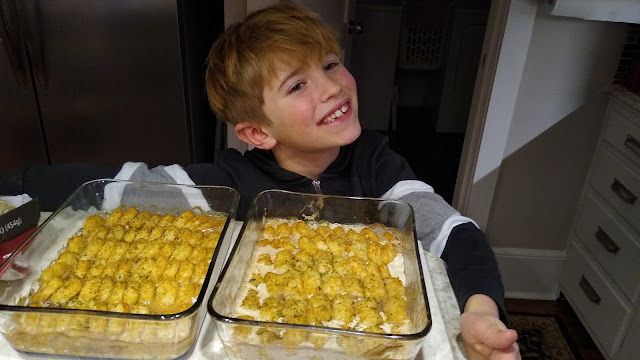 Just look at that!
What a wonderful meal made by talented little boy. 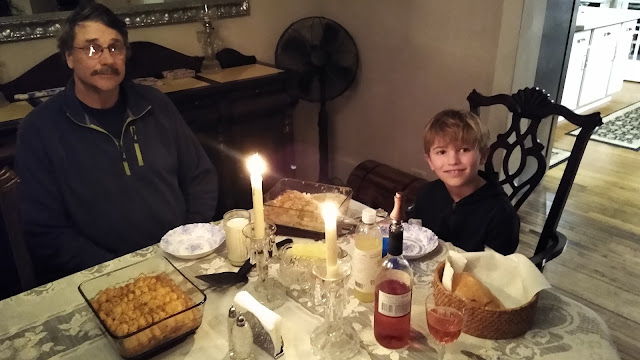 He wolfed down two big helpings and some bread on the side. I guess he is becoming a "growing boy" soon to turn 8.  Bottomless pit and all that stuff. 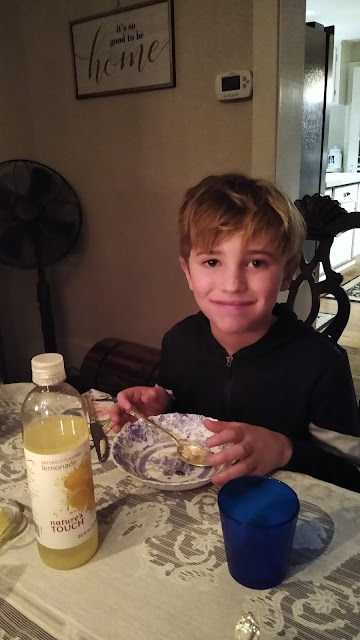 An added surprise was that he got up and cleared the table on his own, taking all of our dishes and helped bring everything into the kitchen.  Then he got to use the pewter candle snuffer and put out the flames.  Such a proper meal with a sweet little boy with manners and thoughtfulness.

Posted by KarenInTheWoods at 9:05 PM