So here it goes, we are up to the letter T now!

We have had problems with a tensioner pulley a number of times on our rig.  We have changed them out I think 4 times now.  Other Safari folks with the same model and year seem to have it go to heck too.  We have a Cat 3126 diesel engine.

We were on our way home 7 years ago and stopped to see a friend in Bethel, MO. We backed outta Rosie’s barnyard and said our “See You Soons” and pulled outta Bethel.  We drove about 5 miles away when Steve noticed our alternator was not putting out a charge…. oh my!   We pulled over and lifted the bed.  The tensioner pulley for the belt that runs on those pulleys to charge it had somehow lost it’s springiness.  We had changed that one a couple years back, and now it’s broke again.  Good thing Steve has a running scan going of all engine and tranny systems on the Silverleaf VMSpc on the dash screen of the Safari.  He can tell at a glance if anything is amiss.

Steve got out some heavy black wire ties and was able to secure the pulley in a tensioned position, and I checked the readouts… yes!  we were charging again!

Let’s hear it for wire-ties!  The World’s Best Invention Next to Duct Tape!

We made it the rest of the way home with the wire tied section, and then ordered a new tension pulley as soon as we got home.  This is what it looks like: 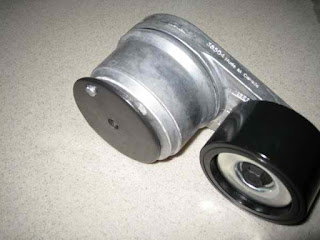 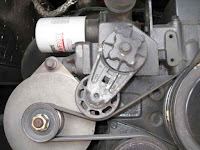 He changed it out by taking the pressure off the belt, and it's only one bolt that removes the pulley.  He put in the new one and lined up the little pin in the hole to make sure it's in the right position.  Tighten up the bolt, and we are good to go again.

We keep an extra on board for "just in case" if it goes out again.

Just like in a car, our diesel motorhome has a thermostat. Back about 8 or 9 years ago, Steve felt our engine temp was not getting up high enough and realized the thermostat was malfunctioning.  They are small metal spring devices that are made to open and close according to temps of the circulating radiator coolant fluid.  A bad functioning thermostat affects not only the heating or cooling at the dash, but on the diesel engine it affects the engine's function. If the temps are not just right, it derates and slows the engine down to a crawl, just enough to get you off the highway and get a tow truck.  Much easier to watch your temps, and change a thermostat if that is all that is wrong. 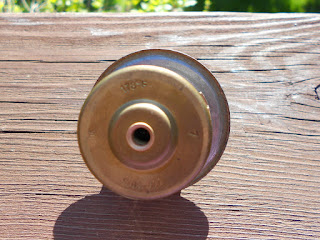 Thermostats for a diesel engine are a bit higher in cost that a regular car or truck, but Steve was able to locate the right one and get to changing it out.   He had to drain a bit of radiator coolant into a bucket which he could pour back in later to bring it back to the proper level.

He removed a couple bolts and took out the old one.  Carefully setting the new one into place with the little gasket, he said it needs to be properly seated.  Otherwise when the bolts are cranked back down it can mess it up and bend the thin metal. 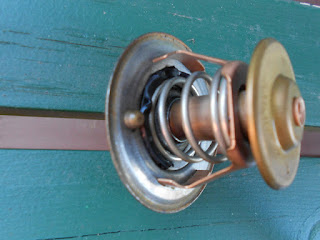 He brought the old one into the house, setting it in boiling water to test that it was, indeed, bad. Yup. He made the right call, it was bad.  The engine temps are now functioning normally.

Now this one is gonna sound like a commercial… but honestly, in Wisconsin with the mosquitoes being our national bird, this new device is totally necessary!!! We have two of them in the camper for when we are in the woods.

These Thermacell units are GREAT for having around the grandkids, we don’t have to slather on icky poisonous repellent lotions or sprays on their soft skin and tiny hands and fingers…  you know how babies put everything in their mouths!  These units are set on the end table, out of reach, and all the mosquitos are gone!

The first time we used them, we were sitting out at a lake where everyone else was huddling inside or dashing to the outhouse, flailing their arms like windmills to beat off the skeeters.   The skeeters were awful, this was May, and they were attacking in droves. Honestly, one couple were wearing beekeeper hats on their heads to protect their faces from the mosquitos as they walked by.

We started up our Thermacells and were sitting ouside in comfort.  We could virtually see the skeeters buzzing about 10 feet around us…  above us... along side of us… but not daring to come near!  Our dogs even huddled closer once they realized the skeeters were not biting them when they laid by our chairs.   Soon folks were asking what those things were, and the next day, the nearest Walmart was a destination goal for all the folks who were camped near us.  They sold out about noon!  LOL

Each refill pad lasts about 6 hours. If we are only sitting out for 2 or 3 hours, we can turn ours off, let it cool, slide the pad out and save it in the tinfoil pack and get a lot more time out of one refill.  Dispose the pad carefully. We save the small tinfoil envelope the pads come in and slide the totally used pad back into the foil when done, (it turns white when exhausted) and put in our own trash we bring back home.

OK, commercial over.  And no, I do not get any kind of compensation from Thermacell.

Friday we were volunteers to help with the Brat Fry for our Calumet County Historical Society.  It is our biggest (and only) fundraiser of the year.  The weather was predicted to be AWFUL!  Freezing rain, sleet, icy winds and not fun at all. 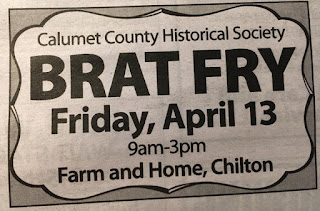 A "brat" is a bratwurst sausage, very popular in our area. Grilling them out on charcoal has a certain smell and taste that you can not get cooking them indoors on the stove or in the oven.  The smell wafting across the air is enough to make your mouth water! 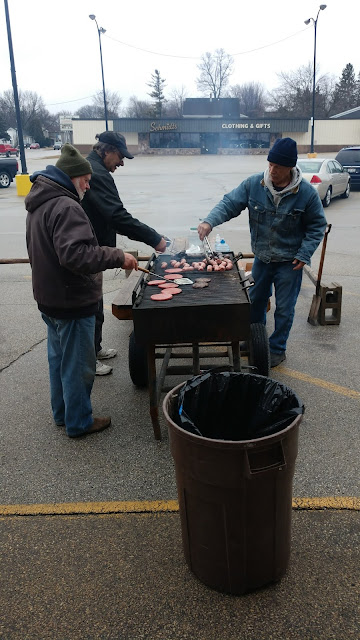 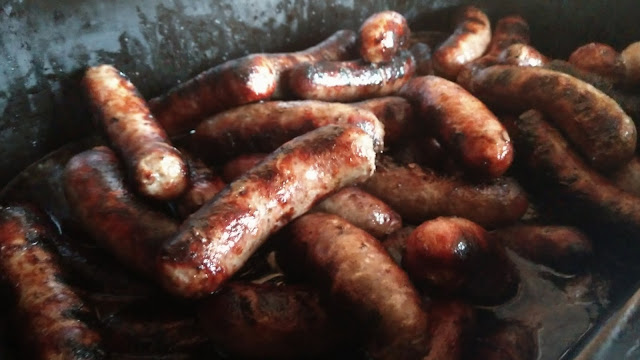 We grill out both brats and burgers for the fundraiser and we are able to use a cute little shack in the parkinglot of the local hardware store. We take "pre-orders" from local businesses in the area, and our volunteers run the orders over to our booth, and take the finished food in crock pots and assorted buns, pickles, catsup, mustard, onions and relish to the waiting employees at local businesses. 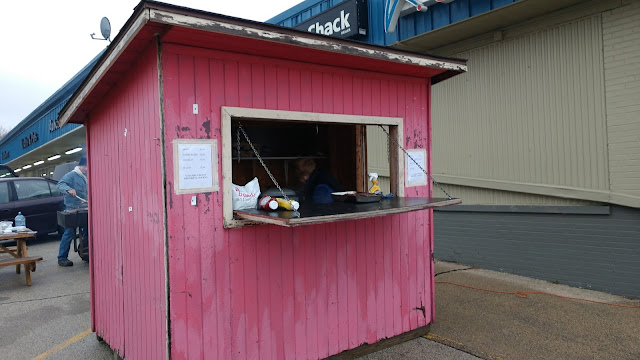 The weather was totally awful!  It was very cold and windy and raining. Steve and the other Steve got the grills going at 7 am because we had orders for businesses at 8 am!   With just 3 guys grilling and 3 girls selling in the booth, our other volunteers ran the deliveries all over town. 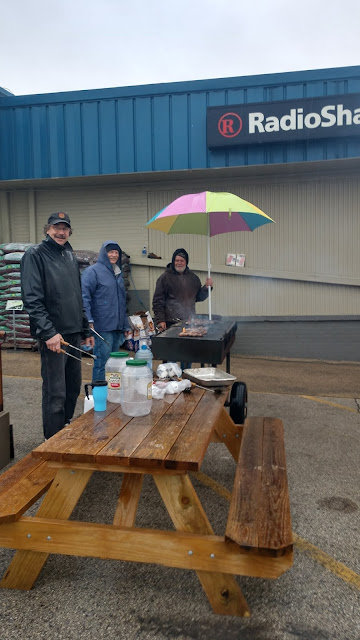 I snapped those pics above BEFORE the weather turned for the worse.

This was taken about 10 am....
when the thunder and lightening started,
as well as the sleet ice chunks pelting us!


By 11 a.m., the winds kicked up, and we had sleet coming inside the booth.  The poor guys were huddled over the grills for warmth.  Inside of the booth, we only had two plug-ins allowed for the nesco roasters, so we couldn't plug in the small heater I brought along.  It would pop the breakers in the hardware store. argghhh!   So we froze and smiled through our chattering teeth as people braved the cold to walk up to the booth to buy brats and burgers!  I assure you, the lady on the left is not that plump, she is wearing layers of sweatshirts and TWO puffy down jackets!!! 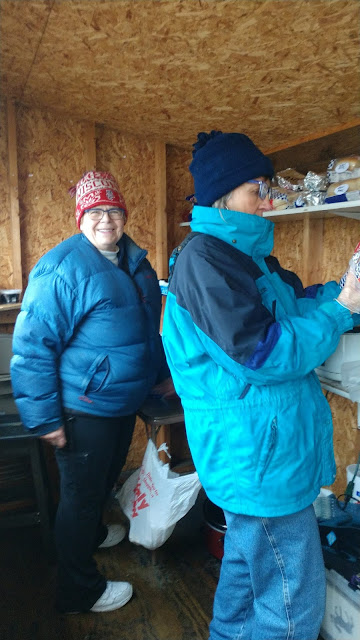 We cleaned up, locked up the booth and came home to take hot showers and crawl into bed for a long afternoon nap.  Whew!   Another successful brat fry in the books!

As I write this Saturday morning, we are due for a LOT more snow on top of all this ice and sleet.  Our daughter last night ended up in the ditch after a late night at work. She was stuck in a ditch on a desolate country road about a mile from her house.  Even with a four wheel drive jeep, the roads were treacherous.  She called for a tow truck, and it took hours of waiting and waiting for updates.  It kept getting delayed due to other accidents happening all around the area.  She ran out of gas after a few hours and could not keep warm! Her husband Jesse was snowed in at home with two sleeping kids and only a minivan that couldn't even get out of the driveway.  (the drifts were waist high)  Finally she woke up a friend with another four wheel drive to come and get her.  Randy was able to get to her, and drop her at the end of their driveway so she could wade into her house at about 4 or 5 am I guess.  Thanks Randy!   The tow truck did not even arrive until later about 9 or 10 am this morning!!!!  I am just glad she is safe and sound...  Poor Jeep! 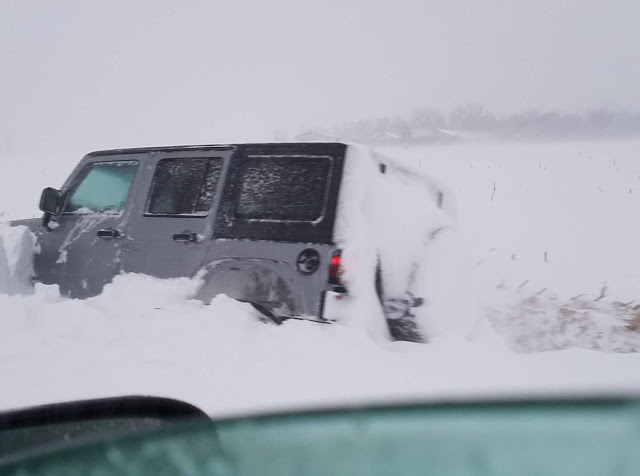 The snow is coming down now fast and furious, and we are due for a LOT more during the next 24-48 hours. 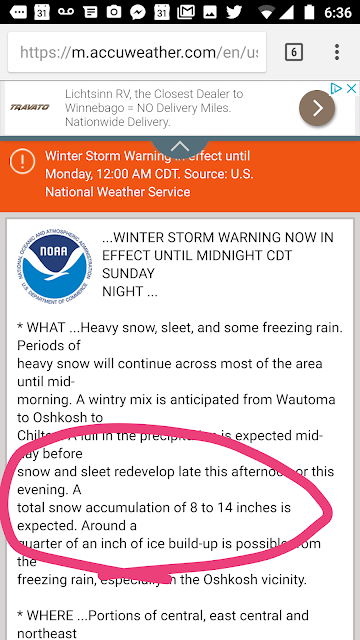 Everything is coated in ice here... we went out on the front porch for a little bit to see the storm.  It's very windy and the ice covered tree branches are falling in some of the neighbor's yards. So far we have all our trees, and the power is still on. 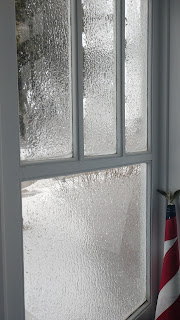 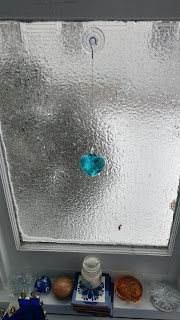 If the power goes out, we do have oil lamps and a gas fireplace that doesn't need any electricity to power it.  If worse comes to worst, we can move our fridge food into coolers and place them in the garage if the power is out for more than a few hours.  We have the generator in the motorhome that we can run a cord back to the house to make the furnace operate if we need to.  We have a battery operated weather radio as well to keep in touch with the storm.  Will keep the cell phone charged up and have an external charging pack as well.  We can still keep on the internet via cell phone, even if the house modem internet is out.  We will be just fine. 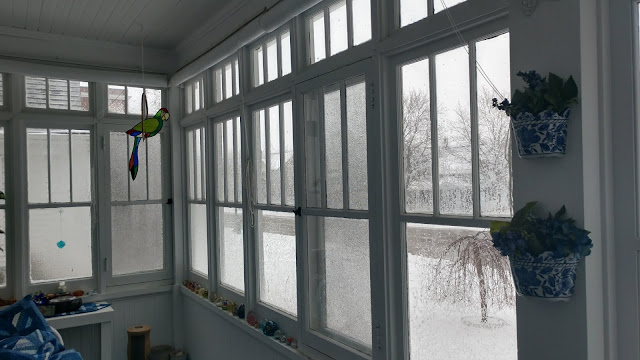 I think we will stay INSIDE
and just look out the window
from the livingroom instead. 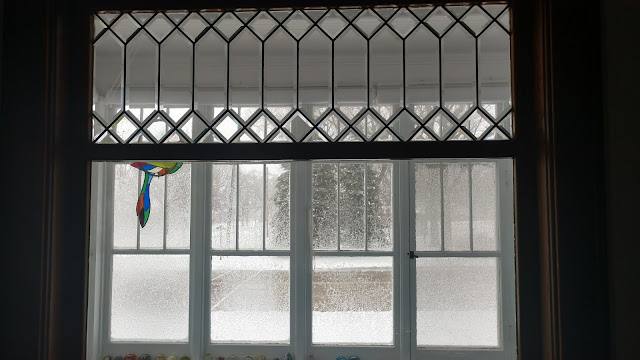 I am planning to stay in and do some sewing.  If the power goes out, I can still use my treadle sewing machine.  Just the way the ladies did in the old days before they even had electricity!   LOL 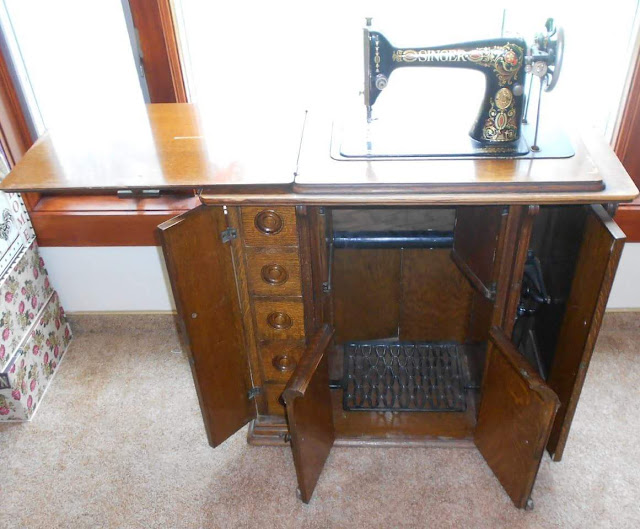 We Prairie Women can manage anything....

Posted by KarenInTheWoods at 11:56 AM