Many of you had busy holiday weekends, I am sure.  We did too. I am VERY thankful for having family to be with over the holidays.  Having family around is a blessing and something to not be taken lightly.

But it's TOO QUIET tonight in our house!


We took care of Claire, the youngest, while her parents went to a concert overnight.  It sure was fun having a little one in the house, and she played so well. She crawls and stands but is not yet walking. It was pretty easy to care for her. She sleeps all night and is such a good tot. She played with the old Fisher Price Farm that our two generations before her also played with! She had some relaxing time with Grandpa while watching some tv.... 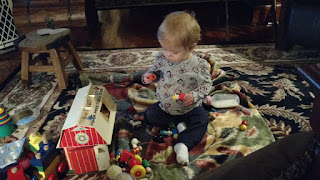 Every Grandmother's kitchen needs a drawer full of containers, spoons and fun stuff for exploring--- strategically located at toddlers' height, right?  Look at that imp, standing up at the coffee table, peeking around my computer. She is looking for her Brown Bear Brown Bear book! 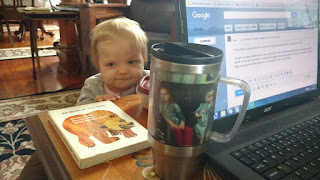 Then a few days after that, I drove up to Oconto and took care of Whitney, the next oldest grandkid.  Her parents had an overlap of work schedules and only needed me for the afternoon. She sure had me going with fun projects, pretend play, and she has a great imagination. 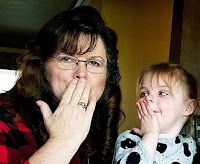 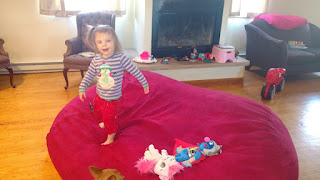 We cooked up Minion-themed mac and cheese and hot dogs for lunch. Oh yummmmm (not) and we played with big beads and she was performing as a hairdresser for Elmo. Whew.. the afternoon just flew by! 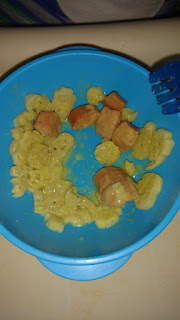 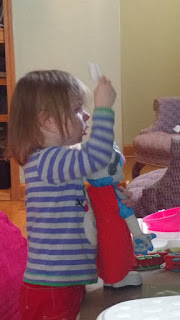 I really enjoy my "one on one" time with each of our grandchildren.
I am truly blessed to have been gifted with seven of them.
~~~~~~~~


On Thursday, we prepared our dishes to pass for the Pfundtner Family Thanksgiving, this year hosted at Steve's brother Pete's and wife Cindy's new home.  We only had about 25 miles to travel, so it was nice and close. The main roads and highways were jammed with holiday travellers, but we had back roads to travel on. We had about 30 people gather for the day.  Missing a few, but they were in our hearts as well. 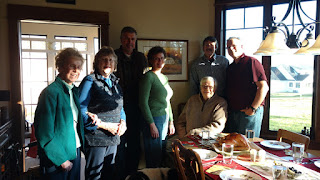 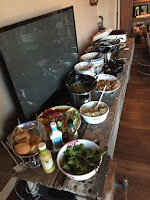 Our own children and grandkids gather with us as much as possible, but having their spouses and other family members to consider, they spread themselves thin each holiday. This year Heather and Jesse were able to attend our Pfundtner gathering with little Jameson and Whitney. 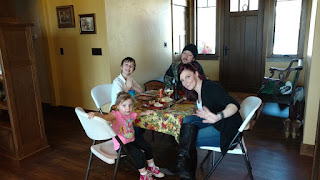 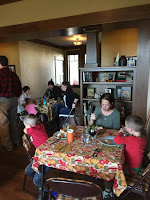 It was such a nice day with Pops Pfundtner and great aunt Nancy as the elders of the group.  We had all ages in between, plenty of  youngsters and even a couple dogs.  The evening drew out long as folks headed on out, but we stayed late to play cards and gab with Steves' brothers and spouses. 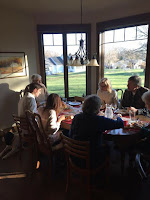 Our dogs were a bit miffed to have us come home so late.  They raced around and acted like a couple nutcases lonnnggg after we headed to bed and wanted to go to sleep. Paybacks?


Friday morning, our daughter Erin came to spend the day with us, bringing grandkids Chelsea, Clayton and Claire. Her hubby Waylen had to work, so we got to have them for the entire day.  We took a walk to the post office and stopped at Hilde's deli and bakery for some cookies and fresh Kaiser rolls.  I had made up a crockpot of pulled pork and gravy to put on the rolls, and we cut up some fresh veggies to munch on --- we were all set for our mid-day meal.

Erin packed up later in the day to head on home with baby Claire, but she left Clayton (5) and Chelsea (7) to hang out with us overnight!

While the grandkids are here, we get to have some special one on one time, but we also work them as all good little slaves should.  Hahaha....  Chelsea started a list of "Things To Do" of stuff that came to her mind.

But our list was long with projects that we had lined up for them:


It was sad to see them go....
and now the house is wayyyyy too quiet!

Today, I did have a nice afternoon outing with my friend Vicky.  We met up in Plymouth and hit up a favorite thrift shop. Then we headed to a cute place called Vintage of Ada to check out their end of the season sales before they close.  I liked a lot of their stuff, but really didn't need too many things at this time of the year.  Vicky gave me an adorable little red cardinal ornament that she made... and now it's in the middle of my red berry wreath on the front door! 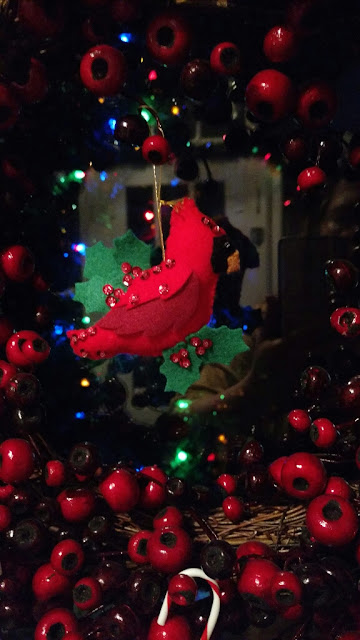 Okay.. it's late now on Sunday night.
The Packers lost.
Time for bed.
Sigh.
Posted by KarenInTheWoods at 11:03 PM