Yesterday we made a trip to Beantown. Yes, Beantown. It's actually the name of a really nice Campground up in the Door County Peninsula of Wisconsin. You know that skinny finger that sticks way up into Lake Michigan?

We went up to help Pops, Steve's dad, to move his motorhome out of storage and get it settled in on to a seasonal site for the summer at Beantown.  http://www.beantowncampground.com/ 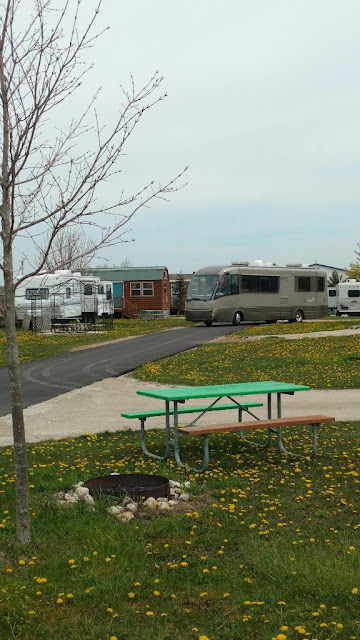 Steve and Tom, the owner of Beantown,  had gone to high school together up in Door County. They were a year or two apart but still knew each other because it was such a small town.

It didn't take long to get Pop's big motorhome all settled into his great site, get it leveled off, and the slides opened up. We dewinterized the water system and helped him set up his sewer hose and got his electrical going. Now he's all set for a summer of camping. We are going to go back up in a few weeks and help him build a nice little deck area on his campsite. It will be easier for placing patio furniture and a round table compared to the picnic table that is already there. We will bring our motorhome up at the same time to park nearby and help build the deck. Then he can be settled in to entertain with the folks in the campground.

We took our dogs along with us because it was going to be a long day. About 2 hours up and 2 hours back.  So all three dogs, Finney, Binney and Pop's dog Millie commandeered the back seat of the truck, leaving look very little room for me! At one point I looked over and Millie was draped across both Shelties like they were her personal Doggie Mattress. "Might as well put these fluff balls to good use" she thought, "they make comfy padding". 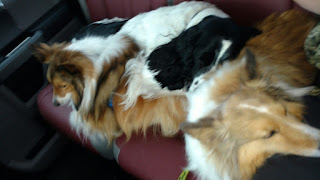 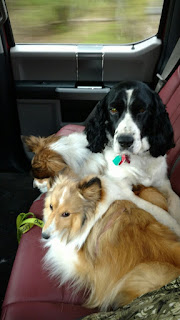 So that was it for Beantown.

Now about the pot(s)

I have been searching lately for a couple of big cement type urn pots to put on our front porch. I had two smaller plaster ones the first summer we were here but one cracked and that those were not exactly what I wanted. I wanted more of the big cement pedestal type urns that would go with the style of our home.

We looked all around and checked quite a few stores and did not find any for sale. I did find a place online where I could order them for $200 and have them shipped but that's quite a bit out of my price range. Ouch!

I even posted a "wanted to buy" ad on all of the local buy sell trade Facebook pages and Craigslist. No bites, not even a nibble.

On Monday I had given up finding any of the pots I wanted.....  and I planted a bunch of geraniums into some cheap plastic pots that I had painted white. They were okay. But it's not what I wanted. Last year I used them and they blew over in some of the thunderstorms and just look cheap. 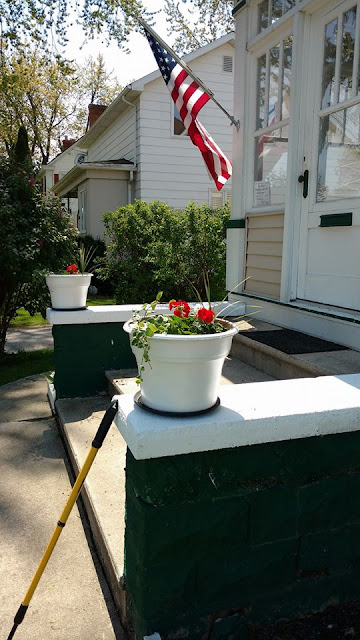 Well well well well ---- as we were driving up to Door County, I was sitting in the back seat of the truck, on my phone, perusing Craigslist. Guess what I found! Somebody in Oshkosh, the opposite direction from where we were going, posted a pair of cement urns exactly what I wanted --- and at a great price too. 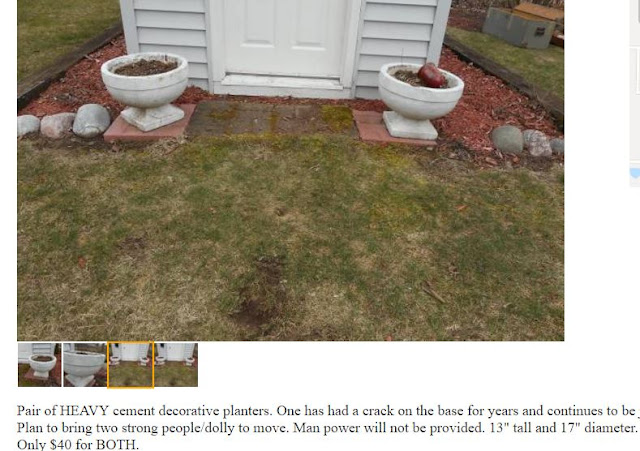 I texted her and she said yes they were still available, but she would not be home until 4:30. That was just perfect for us to arrive after coming back from Door County. After we said goodbye to Pop's in Appleton we headed down to Oshkosh to check out the urns. They were exactly what I wanted and Steve hoisted them up into the trunk of our car to haul them home.

Even though it was late evening and darkness was coming on we decided to haul them up to the front of the house after I hosed them off. 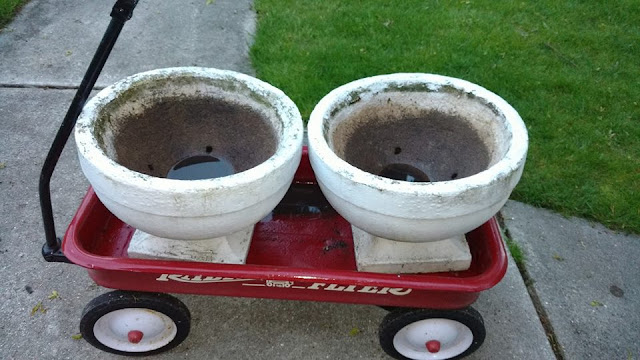 Boy oh boy were these suckers heavy. Steve put them in our little red wagon both at the same time and I really could barely move them as you can tell. 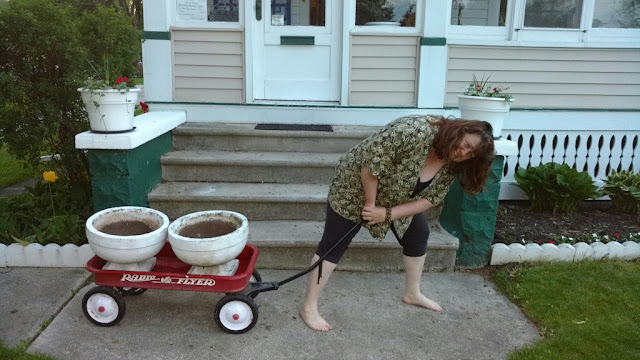 Even he took a break after hauling them up to the front of the house. It was still hot humid and very sticky out. I think it hit 83 degrees here. 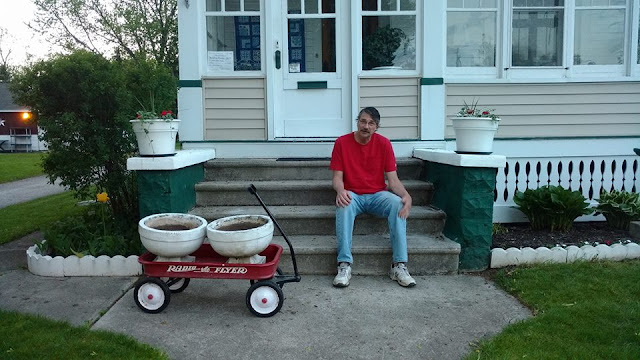 Then Steve hoisted them up into place. I carefully transplanted the new flowers from the plastic pots into the cement ones. We were losing daylight but I wanted to get these done before heading to bed.  Today I will touch up the exterior with some paint to make them look cleaner and more matching of the stoop and trim on the house. 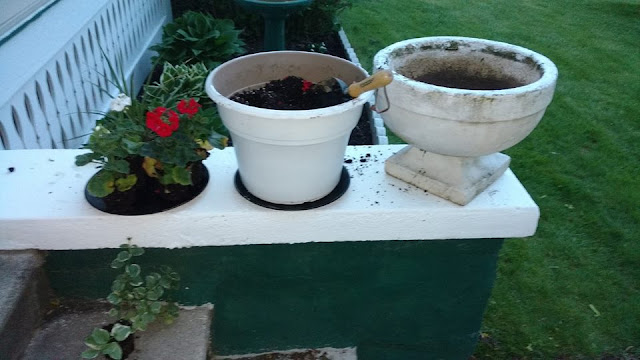 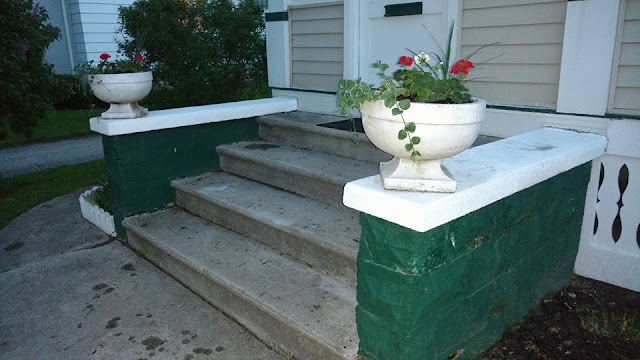 Now this is what I had been hoping for: 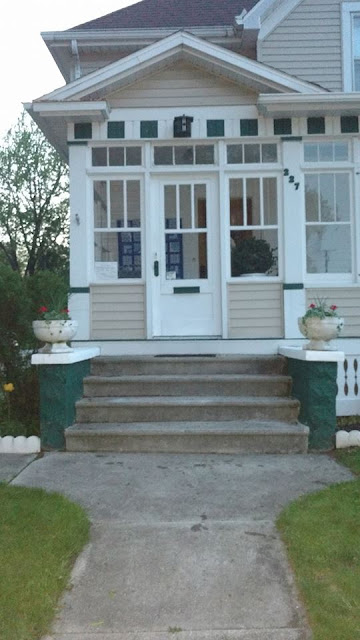 While shopping, Steve also picked up two other interesting shrubs this week and we need to get them planted as well.  They are not going IN the fenced in yard, but around it on the outside. One is called a Sem Ash Leaf False Spirea. It looks like little ferns or feathers and will bloom with white puffs of fluff. It will get about 5 feet tall and about 10 feet wide.  The other one is a tall skinny cedar to grow in a spot where we pulled out some arborvitae and want something to offset the horizontal lines of the other bushes next to it. We had two at our house in Oconto and I really liked them.

We did manage to get my white lilac planted and made a nice flower bed in the corner of the fenced-in yard. Steve helped me transplant some hostas that needed splitting up, and then we moved one of the cactus gardens on the birdbath stands that I wrote about in my last blog. 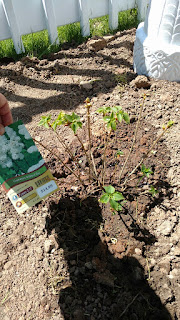 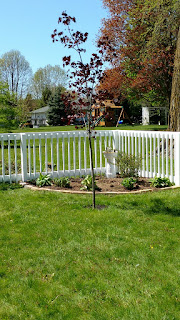 We surrounded it with some old bricks
we found inside the garage and
some other bricks that were leftover
from removing the top of the chimney last year.
Recycling! 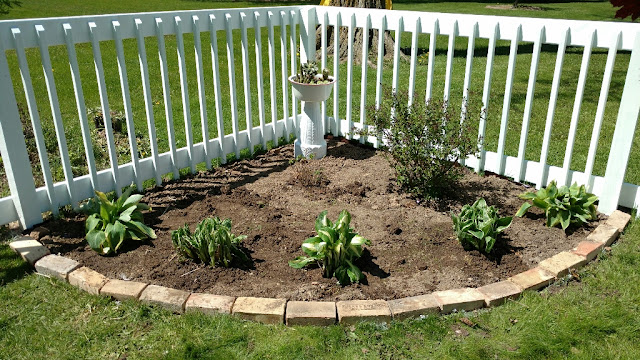 Now I think our backyard is more balanced and even with the fence and two flower beds, one in each corner.  It is also easier with the riding lawnmower to arc along the beds to cut the lawn instead of going into the corner of the fence. 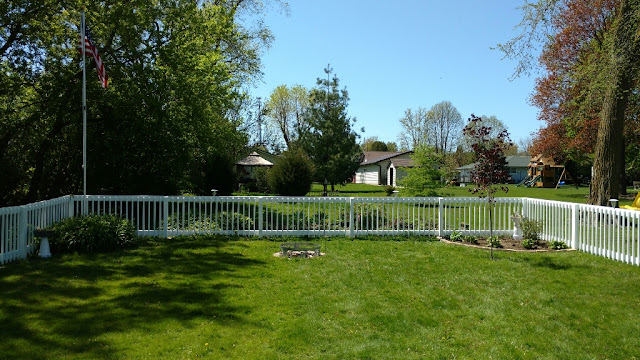 The big job is going to be operating the weedeater along all 258 feet of fence to carefully cut back the grass and not whip the heck out of the wood (like Steve is prone to do) I think we will need to get another battery for the weedeater so I can do it in shifts and not have to wait for a recharge.

Up in the front yard, I did get a row of little red and white impatiens done in front of the house, and I still have some left to plant under the cherry tree.  I will mulch after the helicopter seeds are done falling from the soft maple trees around. Otherwise they are a big mess on top of the pretty black mulch that I like to use.  Steve put the birdbath up front for me on a cement pedestal base to keep it level.  Come on birdies! 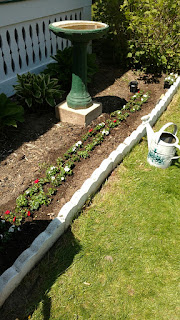 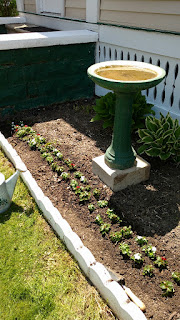 One of the things in our backyard I do NOT like is the huge ugly telephone pole. I decided to plant some vines of clematis at the bottom and tie around the pole a couple times with string to get it started. I already have a few blooms on it so I think it's taking off. 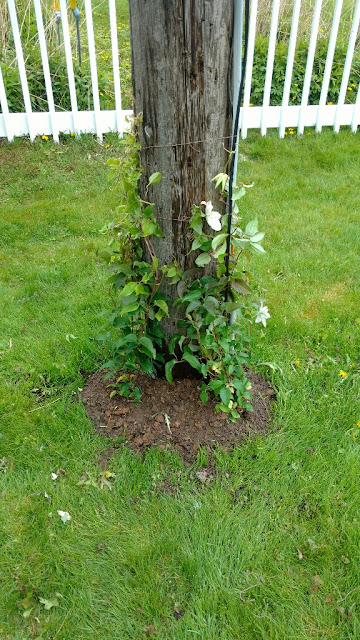 I would rather look at a column of beautiful flowers than that ugly pole. Not only is it old and full of holes, it's crooked!  It's a shame it has to be in our yard because it's not really being used by us.  They came through 2 years ago and replaced all the poles up the center of the block, but skipped this one at the end of the line.  Our power to our house is buried underground, but the lines on this pole lead up overhead to the neighbor at the end of the line. The telephone and cable wires on there also are not used by us as the phone lines are buried underground and we do not have cable.

Grow, Clematis, Grow
and cover up that ugly pole! 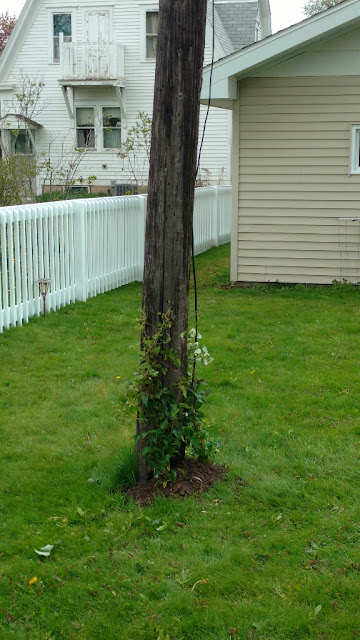 Today is going to be hot and humid again like yesterday. We did not start the air-conditioning yet, but we do have all of the windows open to let fresh air into the house this morning. 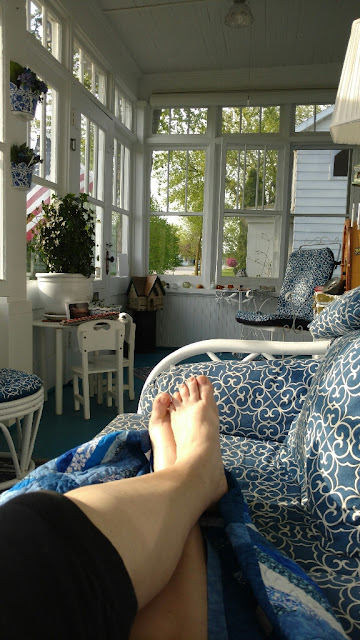 On edit... I set down the coffee,
grabbed my paint and brush
and gave the urns a fresh coat of paint! 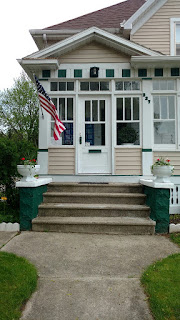 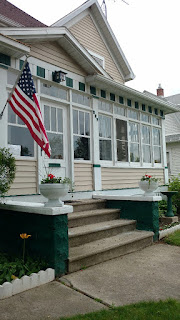 Posted by KarenInTheWoods at 11:21 AM