I am going to start off the new year with posting three of our motorhome modifications at a time. I will post repairs, modifications, or neato things we have found for RVing.  I have lots of pics in my files so I will do them in alphabetical order.

So here it goes, we are up to the letter C now!

Crocks:
A friend told me about these.... called Stone Wave crocks seen on infomercials a few years back.  They were about $7 or 8 bucks each (plus shipping... but wait... there's more!.... hahaha)   She found them at Dollartree. For a buck.  She tried them out. She liked them enough, so she told me about them.  I bought two.  Then went back and got four more. I do sometimes see them in thrift shops too.

Steve gave it his "thumbs up" and said it's a good thing....  ahhhhhhh 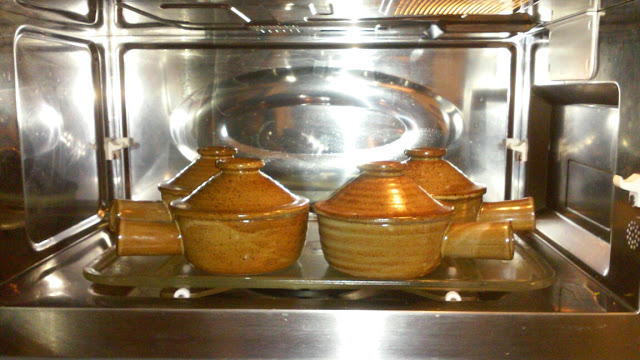 I made breakfast in them again yesterday morning in the house, and love how quick and easy they are to use and clean up afterwards.

I spritz them with non-stick cooking spray.  Then I crack two eggs in each one.  Mix them up a bit with a tiny wisk (or fork) not too much,, we like bits of both white and yellow in our eggs, not all fully blended yellow.  I toss in some real bacon bits, some dried onion bits and salt and pepper.  Put in the microwave for three minutes.  Almost fully cooked, but I take them out, using a rice paddle I flip each one over in the crock and put them back in for one more minute.  Now add shredded cheese and some parsley. Done.  It takes almost as long to make our toast as it does to make this breakfast! 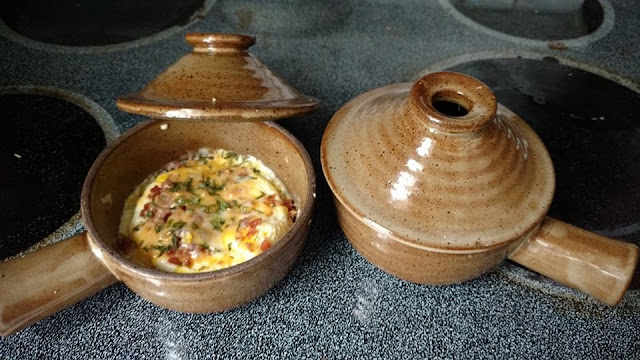 I don't want to fill up my blog with recipes, but I picked one recipe off of the website that looked good.  I had little penne rigate noodles instead of spiral rotini noodles, but figured what the heck... gotta improvise.  I had fresh broccoli instead of frozen. I had bratwurst sausage meat on hand. It wasn't pre-cooked but I did that portion extra long to cook it thoroughly.  I never follow recipes exactly anyhow! 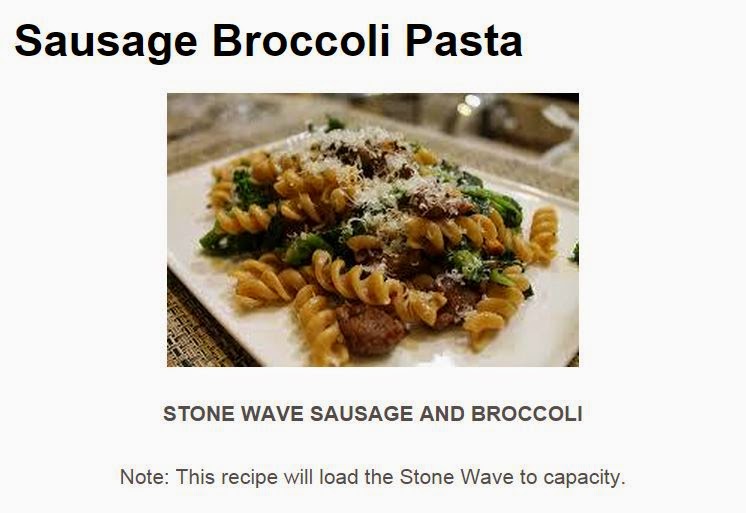 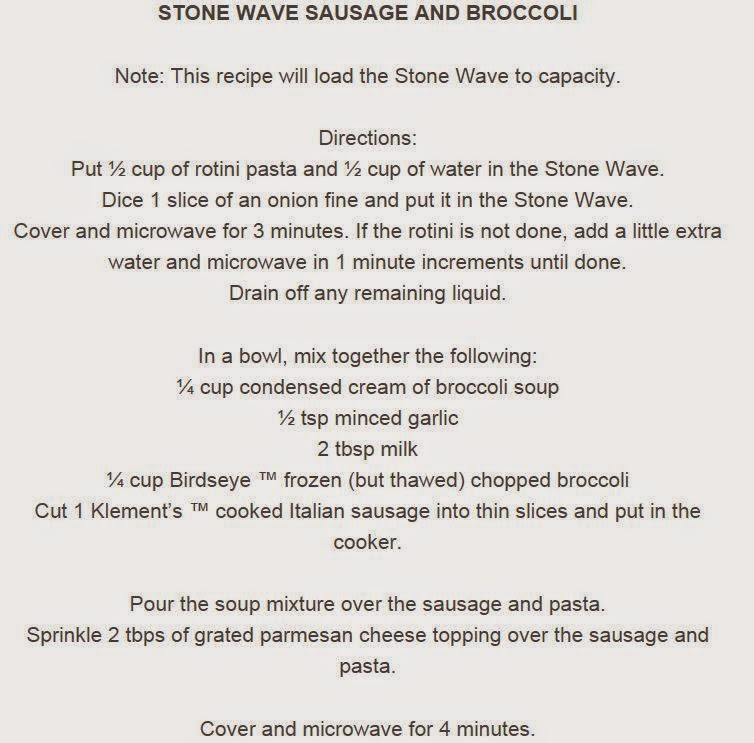 By having four stone wave cookers, I could do two with the noodles and two with the sausage and broccoli portions.  All four of the cookers fit well in my microwave.... and NO splatters to clean up like if I were doing them in regular open casserole dishes!

First I cooked the noodles in two cooker units and
the meat, broccoli and onions in the other two ... 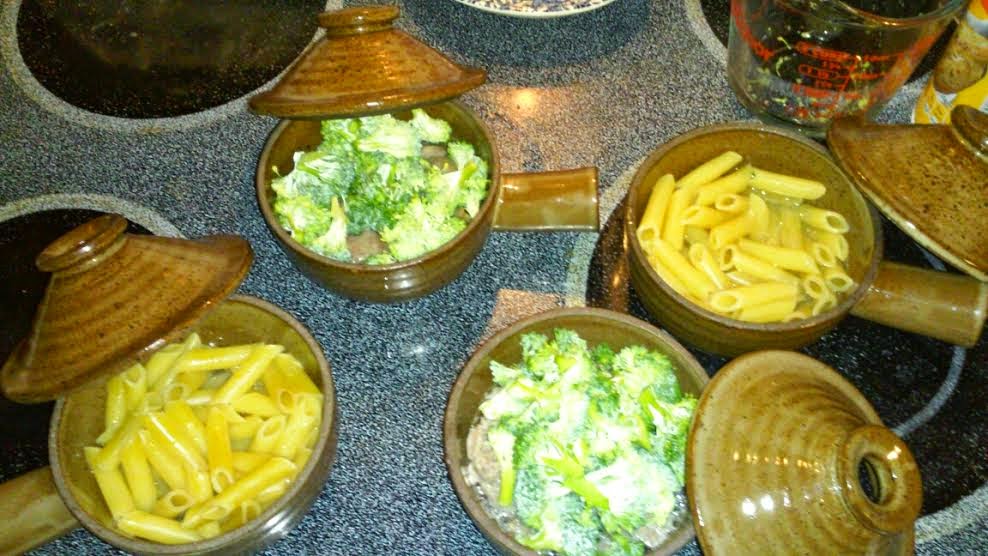 If you only had one cooker, you would have to cook the noodles first,
and set them aside in a bowl.
Then cook the meat and broccoli sauce in the cooker.
And finally put them all together.
Buying an extra cooker for a dollar more is worth it.


Next I drained the water from the meat/broccoli cookers and the water from the noodles. I would highly recommend a flat plastic strainer like in the pic below.  A lot of the recipes are done with a bit of water in the bottom for steam that needs to be drained out.  Easier to use this flat strainer tipping the cooker to the side over the sink, instead of dumping into a regular kitchen colander to drain that small amount of liquid. 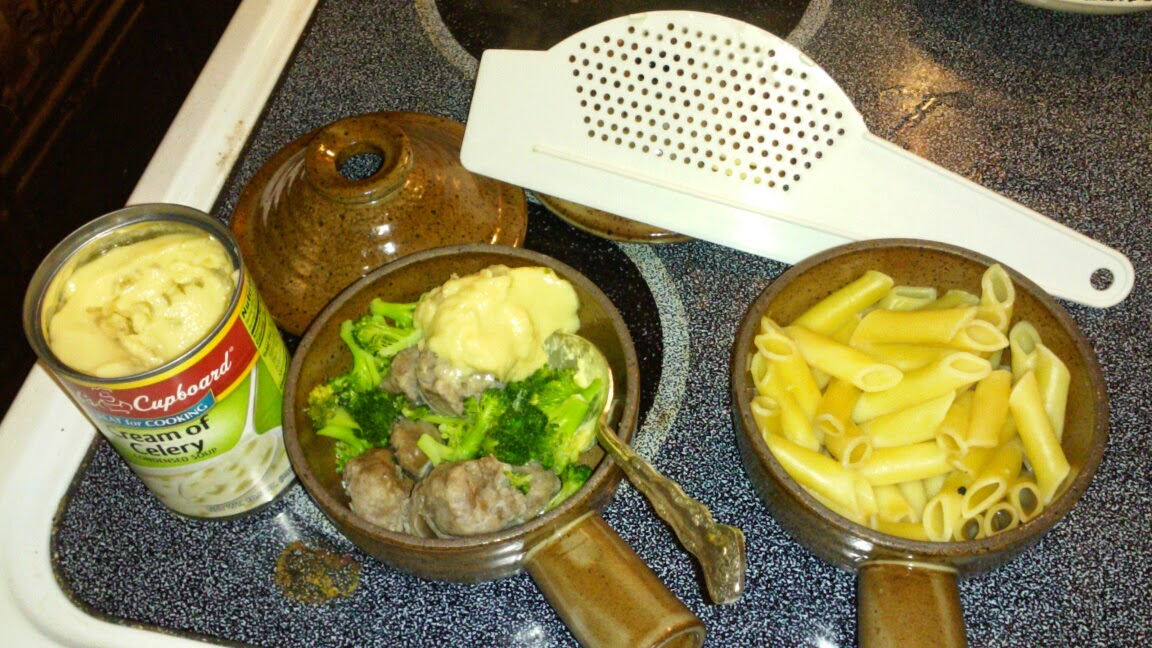 Then I added the cream of celery soup instead of broccoli soup.
Add the milk. Stir it up good.

I put them in about three minutes longer than the recipe called for....
My noodles got a bit over done, but then I stirred them up and they were okay.
I accidentally put too much milk in one of them.  Gotta measure and don't need much. 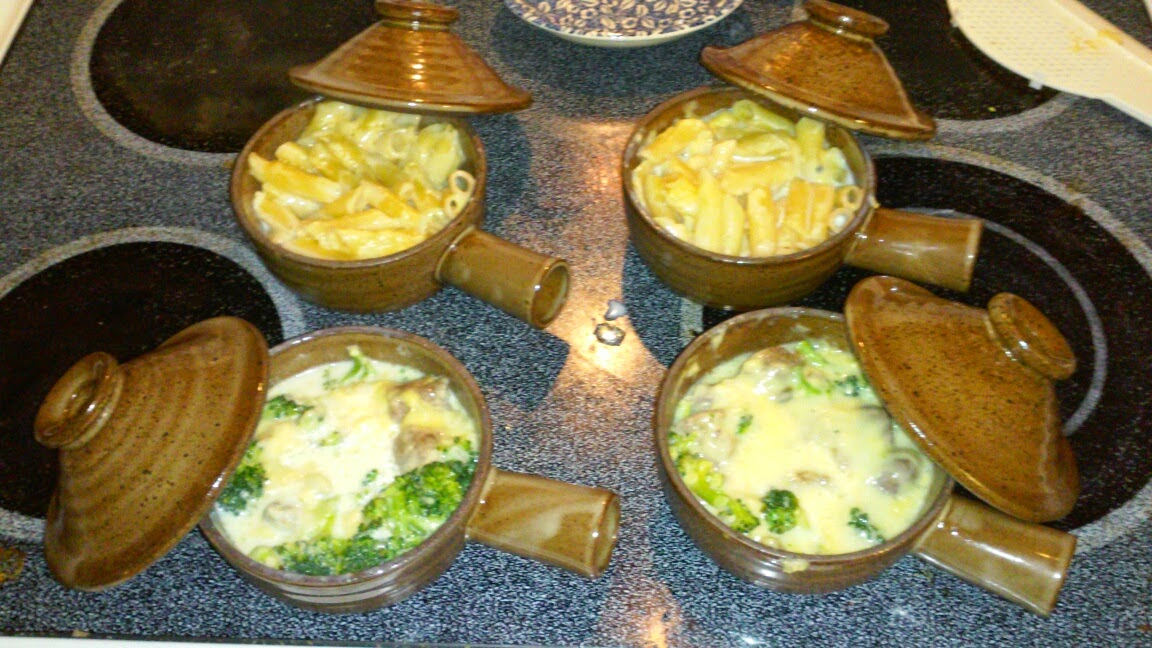 The handles were a little warm, but still a lot cooler than the handles on my corelle grab-it dishes!  I poured the noodles on the plate first, and then the meat and broccoli sauce over the top.  You could really just mix the two together into one cooker, because the broccoli cooked down with the meat and made room.  Then you wouldn't even have to dirty a dish, just eat right out of the stone cooker! 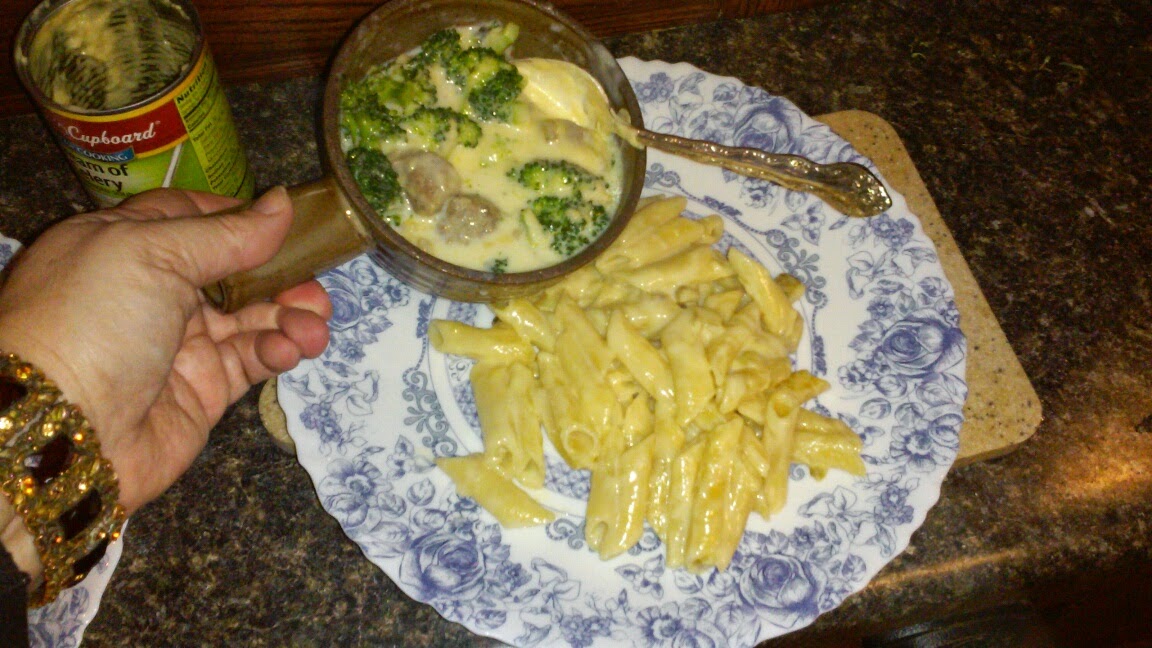 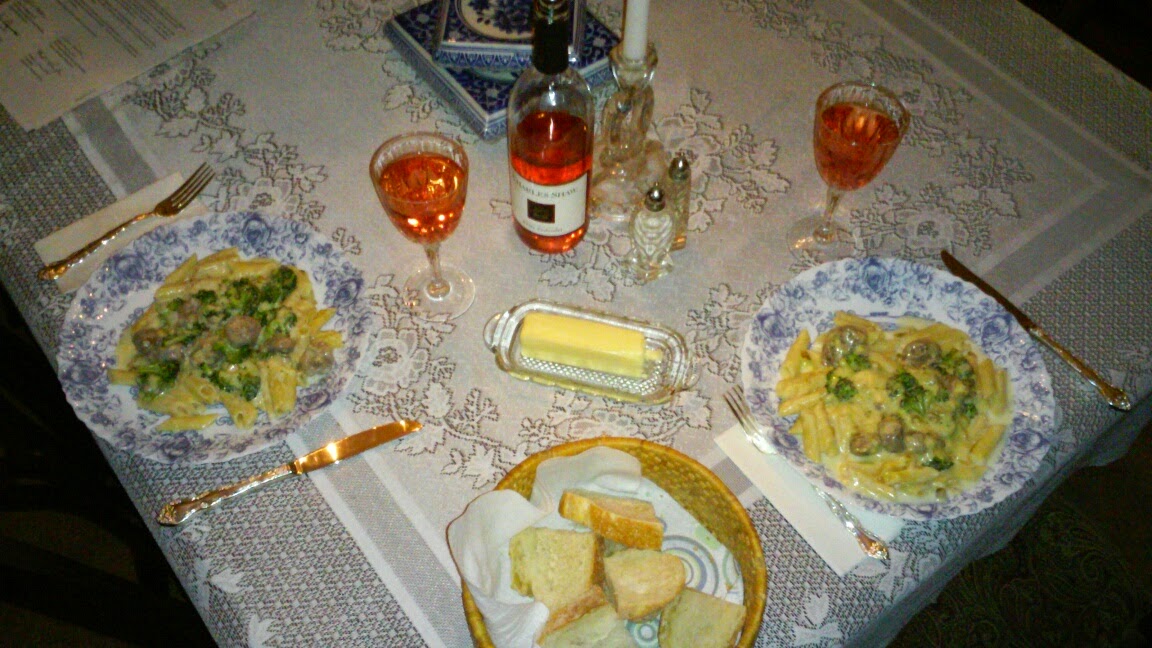 or this blog post of other users sharing their recipes:
blog post with a bunch more recipes


Steve came up with this great idea to add more shoe space in my side of the closet in our motorhome.  It is a simple board with two other boards secured underneath. It sets right in place and does not need to attach permanently.  It can be removed with ease if we ever wish to have more length rather than shoe cubbies. 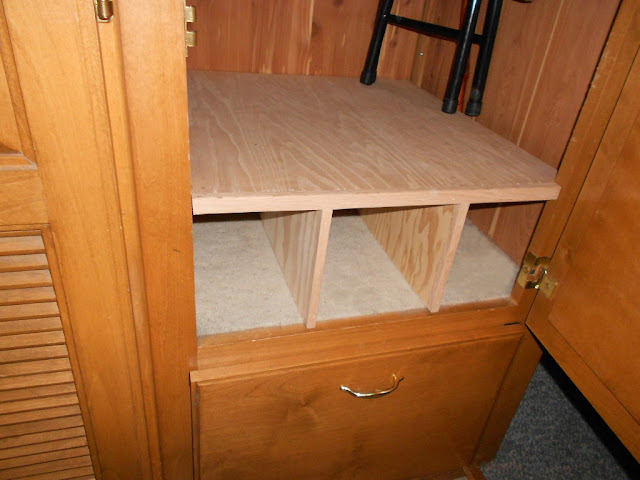 It works really well to stuff 2 pairs or so in each section. 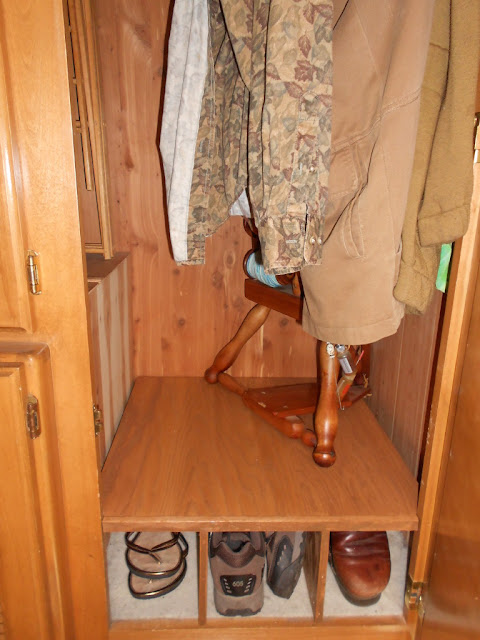 (I carry a spinning wheel sitting upright in the closet,
tucked between the clothes for added security)

Yesterday I worked on more of my quilt.... got five rows done of 8 blocks each.  The quilt will be 8 blocks by 8 blocks, then add a border.  Will fit a queen size bed then, like the one here in our guest room.

But I am going to keep this quilt down on the couch as a cuddle quilt for naps or watching the fireplace, or just reading a good book.  ahhhhh

Although I have a complete sewing room upstairs in one of the bedrooms, last night I wanted to hang out with Steve in the livingroom.  I brought down my backup Singer Quantum machine that I use when travelling in the motorhome.  I put it on this cute little rolling bench from the front porch.  Now I could sew while sitting on the couch near Steve. 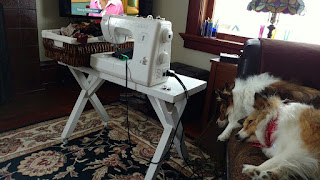 Last night I sewed up 14 more blocks.  Maybe today I will get the last 10 done so I have three more complete rows.

We had woken up to a lot of snow, plus it had blown around quite a bit making some deeper drifts.  Steve had just repaired the auger cable in our snowblower the day before (it had shredded in half!)  and now he was able to try out his hard work: 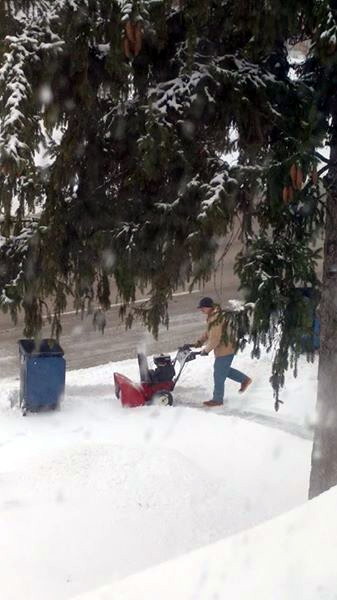 I was going to go out and help shovel the doorways and steps,
but instead I hung out in the front porch and snapped these Snow Pics. 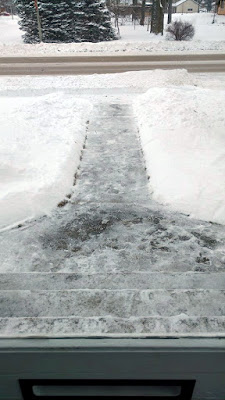 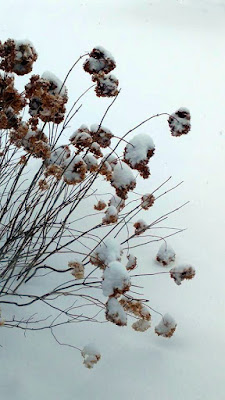 Everything here is glazed with a thick layer of ice first,
then all the fresh new snow on top of that. 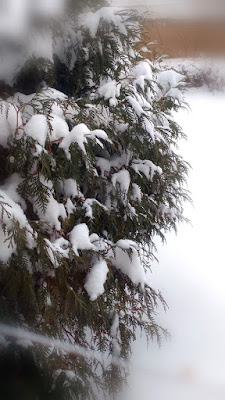 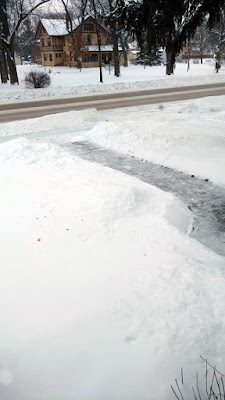 My sweet little blue spruce from Mothers Day
is all adorned with layers of snow. 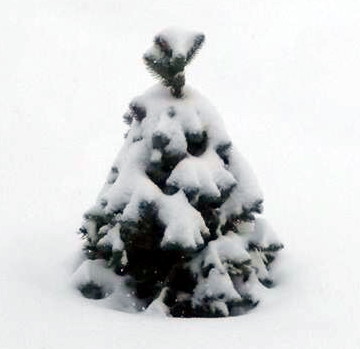 Our day today is going to be doing a few things around the house, and maybe have a gal come over to look at taking that mirror from the motorhome. We have it laying on the bed out there. I put an ad on the local Facebook Buy Sell Trade pages and Craigslist, asking for anyone to come and get it for FREE. They just have to carry it out and transport a 93 inch long mirror!!!!

I do not want 7 years bad luck!

Posted by KarenInTheWoods at 9:24 AM