We have been severely lacking in snowfall here in Wisconsin.  Our Christmas was far from "White", it was much more like MUD.  (I will do another post about our holidays next)

The weathermen started warning us on Sunday about the impending storm coming our way. Seems our section of Wisconsin was slated for some of the highest snowfall totals predicted. We were due for 10-12 inches.

The snow started coming down Monday morning, just enough to cover the ground and make things slick. My friend Linda in Tennessee misses having snow, and my friend Rosie in Missouri gets some, but she loves to see it too. I made them this little video clip:


By Monday afternoon, we were getting some sleet on top of it, just enough to make things a slippery mess!

Monday evening, the weather forecasters were warning us about an inch an hour. It was going to last all night into the wee hours of the morning.

We hunkered down to see how bad it was going to get.  After work, Steve prepped the snowblower, filling the fuel and running it to be sure it was in tip top shape.  (Knowing him, everything that has a small engine is running in tip top shape) ---   Most folks run out for bread and milk.  Steve runs out for more gas!  Smart man.

After supper, the storm kicked up a notch or two, and we started getting accumulation...  filming from the comfort of the front porch makes it easy to observe the weather and not have to actually be out IN it!~

Before we went to bed, we decided to take down our christmas tree.  It had been a pre-cut tree rather than a fresh-cut, and was losing needles by the dozens each time we walked past it. Time to get it OUT and less of a fire danger in the house.  Steve battled the winds to get it hauled just out the front door and dumped into the flowerbed. We will find out when the city sanitation offers tree pickup, but for now, out the front door was as far as he was going to go.

The winds were whipping up to 25-30 mph and gusts of 45-50.  We could hear it howling but we were cozy and warm in our stout german house.  Before we headed to bed, I snapped this pic of the frosted frozen porch window... 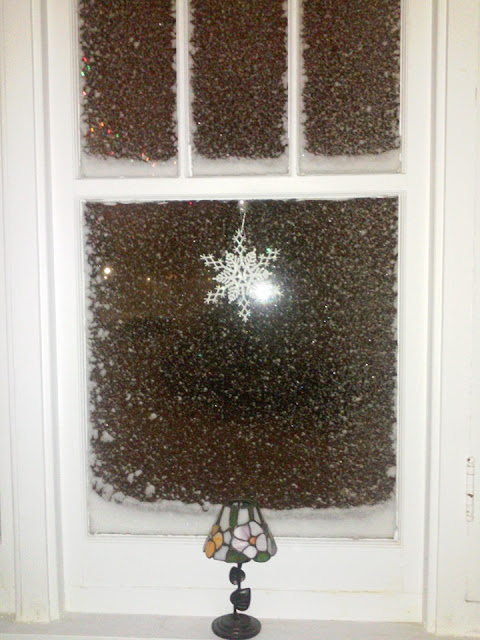 This was the wind, sleet and snow blasting from the south
against this window...

During the night, I could hear the wind howling outside.  The roads were not being plowed, as everything was shut down.  Warnings on tv said to not go out unless it was an emergency. About 1:30 am an ambulance made it's way down the highway in front of our home.  I felt bad for whomever needed the ambulance during the night. It was not a good night to be out and about.

By 5:45 am, Steveio was up and at em.  He looked out at drifts as high as three feet, and the plow had just gone through, shoving up a 40 inch high snowbank across the end of our driveway!

If you are from the north, you know that if you DON'T get that plowed snow bank moved out fast, it hardens into a thick solid ICE BANK.   Steve donned his snow gear and headed out to fire up the snowblower.  Wheeee it was as deep as the blower and he slowly chewed through the snow to get up to the front yard... Here is a video I made in the early morning light of him working so hard.

Notice how he has to take a tiny chunk at a time?

He managed about an hour and half doing that kind of hard work, before he stumbled back into the house.  He was wet from head to toe with sweat.  I sent him up into the shower while I cooked up a hot breakfast for his belly.  He had been hoping to get into work on time, but didn't even get the driveway cleared enough to get out with our Tracker.  Four wheel drive don't mean much when it's drifted shut three feet deep and all ice underneath.  ACK!

He donned fresh clothes and headed back out again.  Soon he was able to get the Tracker out, but he also took the time to blow a path up to the widow lady next door, just in case she needed to get out.  Her daughter is in the hospital, and she might be needing to go there today.  What a guy!

Then he hopped in the Tracker and sped off to work..... to do guess what?
PLOW SNOW
SNOWBLOW WALKS
SHOVEL SNOW
allll dayyyy longgggg

As it got lighter out.
this is the view from our livingroom window: 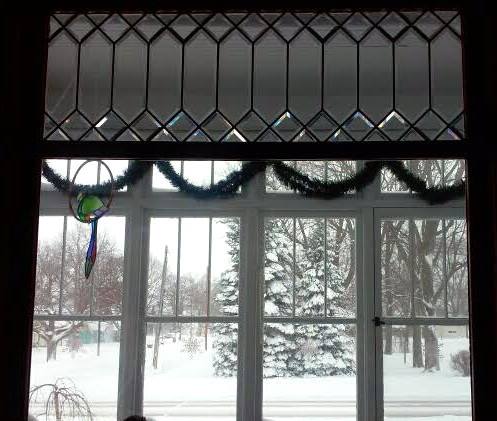 Everything was so bright and clean.
I love the snow clinging to the pines across the street.

About 11 am the garbage and recycling trucks went through town, so I donned my boots and coat and hat to go out and pull our bin and the neighbor's bins back up to the houses.  I managed to snap a few pics of the house and yard because it was SOOOO pretty! 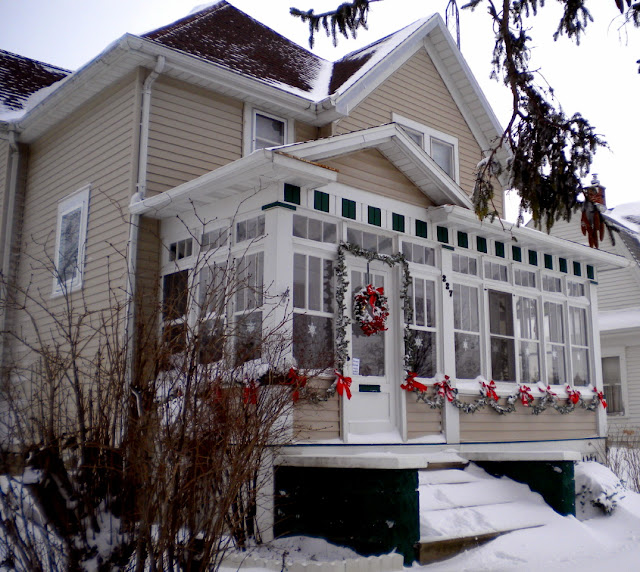 Our poor motorhome is still buried,
patiently waiting to head south sometime soon for a vacation. 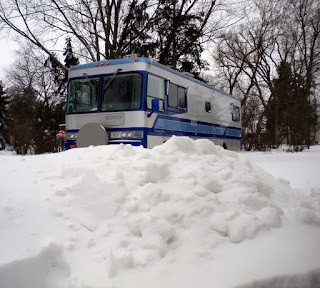 The whipping winds made some interesting wavy drifts clinging to our garage
and little Binney kept an eye on me from her perch inside. 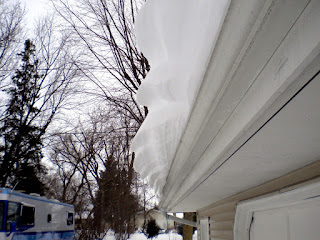 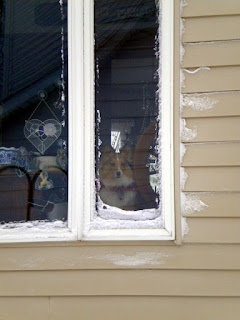 The snow is piled up on my clematis trellis,
and adds to the holiday decorations! 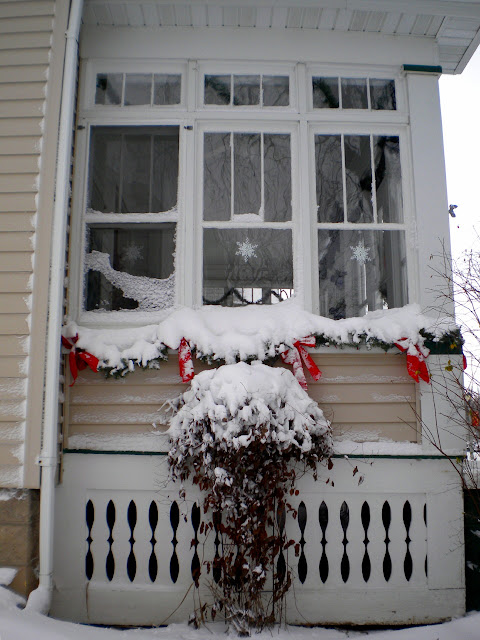 Although we didn't get a White Christmas, at least we got a White Christmas Vacation!   After Steve's long day at work, he came home to a hot meal and a shower.  He was going to head back out to snowblow some more in the yard and make the driveway wider, neatening up the banks.  The motorhome needs to get freed up, and the front sidewalk is only a single swath. But I talked him into just resting tonight, and hit it again tomorrow morning. 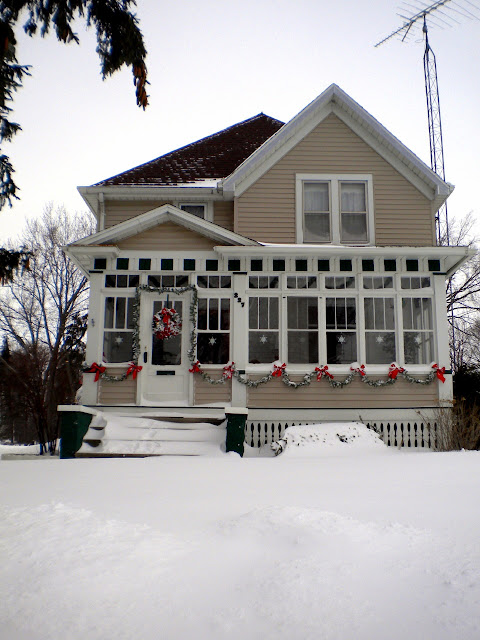 Posted by KarenInTheWoods at 7:41 PM